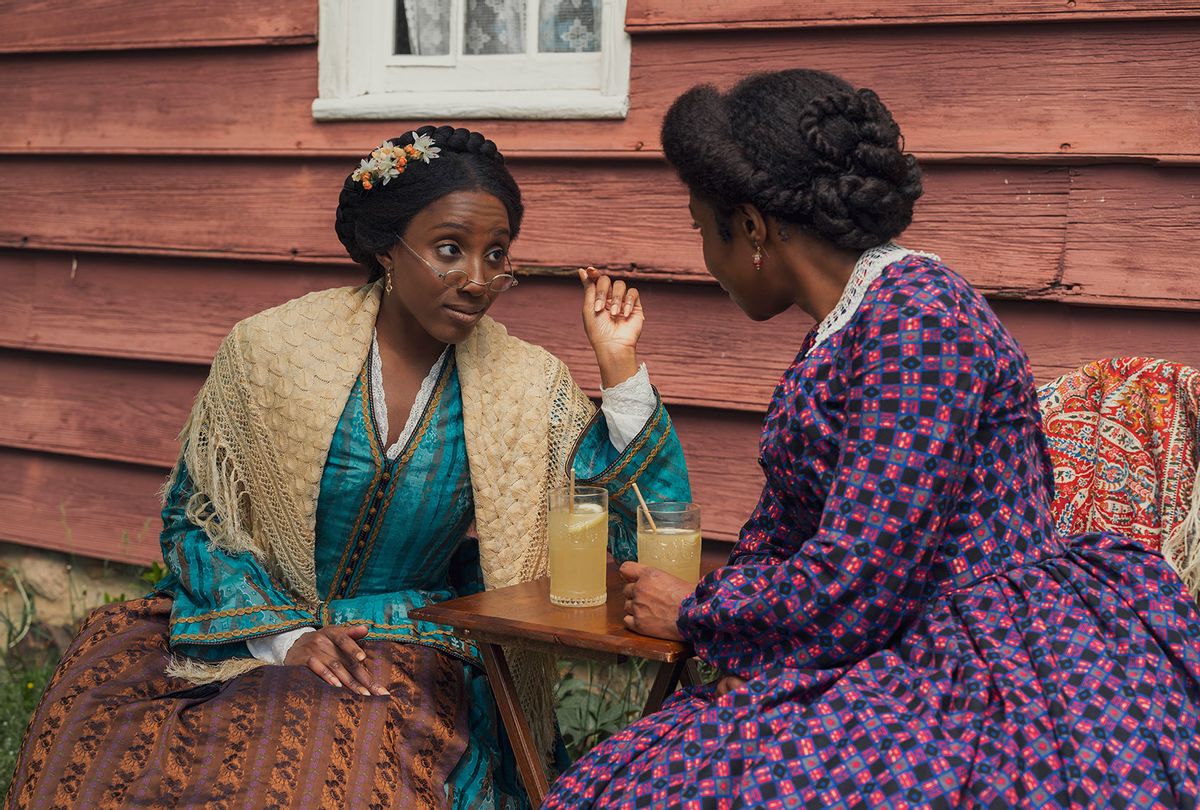 "Dickinson" takes Emily to war in its third and final season – in mind, as always, not in body. The poet's imagination is a vehicle traveling her through time and across realms, following roadmaps presented through literature and periodicals. This is how the show and its star and executive producer Hailee Steinfeld grant us an audience with a vivacious Walt Whitman (Billy Eichner) that feels lifelike even though Emily never leaves her greenhouse sanctuary.

And if we believe that, which we do, why wouldn't we believe a 60-year-old Sojourner Truth has the attitude and flair of the woman who plays her, 29-year-old Ziwe Fumudoh? "Dickinson" allows Ziwe to interpret the legendary abolitionist as a beacon of inspiration, the Iyanla Vanzant of the 1860s.

Like all the show's historic celebrity cameos, that isn't too farfetched; Sojourner Truth's travels took her through Massachusetts around that time. As for the theory that she was as ageless as Angela Bassett, why not? "I lecture to testify to the hope that's in me, BITCH!" Ziwe's Sojourner declares as she fans herself theatrically, adding, "I'm 60!"

Ziwe, who recently appeared on "Succession," is among a cadre of actors recruited to play a literary all-star from Emily Dickinson's time. Before Eichner colorfully sends up Whitman, "Dickinson" gifted us with John Mulaney as a petulant Henry David Thoreau, Nick Kroll giving his best broodiness as Edgar Allen Poe and Zosia Mamet as an eager-to-cash-in Louisa May Alcott.

The important distinction in Sojourner Truth's visit to Amherst, however, is that Emily isn't her host. That honor goes to Amanda Warren's Betty, the town's dressmaker and a pillar of Amherst's Black community. We are privy to Betty's world because she's part of Emily's circle of confidantes. Emily respects Betty as a fellow creative spirit, as well as the wife of a fellow writer, Henry (Chinaza Uche). And we know about Betty's hopes, anxieties, and invest in her and Henry's well-being because series creator Alena Smith makes a point of drawing our focus to her story.

History writes Emily Dickinson as a recluse who only published about 10 of her hundreds of poems while she was alive and rarely if ever left her room. Smith designs "Dickinson" as an anachronistic feminist reading on the titular poet, bringing her to life as a woman alive with desires and ambitions she chooses to realize on her own terms.

The "Dickinson" creator and her fellow writers (including Ziwe, who shares a credit with her on the seventh episode, "The Future never spoke") bring ample humor into her biography through scripts incorporating modern slang, 21st century dance moves and tracks from the artists such as Billie Eilish and Taylor Swift.  By seamlessly joining history with an array of modern kicks and edges, the show has cultivated a reputation for consistently surprising and delighting its audience.

We can sing similar praises of Hulu's loose interpretation of Russian historical intrigue in "The Great" and Netflix's Regency-style fantasy "Bridgerton," each of which also populate their worlds with ethnically diverse casts. Elevating "Dickinson's" approach above those  other shows, however, is its willingness to cash in a portion of its capital to tell the story of Emily's time through its Black characters' perspectives, and with the same wry lightness and hilarity.

"Dickinson" takes place in a fantasy version of Massachusetts and presents Emily's hometown of Amherst as a place where Black and white neighbors co-exist amicably. Nevertheless, Emily and her family don't pretend that Betty and her daughter have the same rights and privileges they enjoy. Betty is an independent business owner raising a child on her own and without the help of servants, whereas Emily and her dramatically inclined sister Lavinia (Anna Baryshnikov) would not have the time to socialize or create if not for their mother Emily Norcross Dickinson (Jane Krakowski) and her insistent housekeeping, assisted by Maggie (Darlene Hunt), the family's maid.

"Dickinson" places its feminism front and center by focusing on how Emily and Lavinia empower themselves despite their controlling, patriarchal views of their father Edward (Toby Huss), who considers himself to be a doting, progressive father.

By developing discrete storylines for Betty and Henry, however, the writers also delicately walk the walk of intersectionality. Granted, that term may not seem entirely applicable within the context of a show that remains primarily about a white woman, let alone a poet considered to be a bright star in America's literary firmament without having to hustle for that honor like her life depended on it. But consider how "Dickinson" interprets fame in the series – how it shows rather than tells.

The concept is present and palpable in this new season, where the contemporary specter of liberal white "wokeness" possesses a Union officer named Thomas Wentworth Higginson (Gabriel Ebert). The real Higginson was an advocate for women's rights before the war; the one on our screens is the patron saint of facepalms. Ebert's Higginson means well, so much that he polices his language and makes ungainly utterances like "my brutha," immediately appears to regret it but can't stop doing it. He also writes for Atlantic Monthly, and this draws Emily to the idea of him. She wants to understand war, and who better to educate her than a fellow writer who has taken up arms?

The Dickinson family's status enables Emily to hobnob with notable writers and publishers while Henry, another writer driven by existential purpose, has no choice but to secretly and anonymously publish an abolitionist newspaper until its discovery forced him to flee town.

The latest episodes find Henry in South Carolina, where he answers Higginson's call to assist him with his command of the 1st South Carolina Volunteer Infantry Regiment, one of the first Black regiments the Union Army made up with formerly enslaved men.

With the Civil War drawing Emily's friends and loved ones into the conflict, along with the fact that Ed has a brother living the South, the show must take us to battlefront. Doing so from the perspective of demonstrably courageous men who seized freedom for themselves and are nevertheless denied the resources – such as guns – to fight Confederate soldiers, is a conscious choice and a smart one.  Following the men of the 1st South Carolina Volunteer Infantry is a lot more interesting than tailing Emily's school chums from their comfortable homes into the battlefield. We've seen that version of history told every which way.

Not seen as often are fictional depictions of Black regiments told with laughter amid joy while maintaining a reverence for their characters. (The regiment is made up of men such as Erasmus, who can see the future – which is handy for his brother in arms Michael Jordan.)  These men are devoted to being alive and thriving, and view fighting for the Union as their ticket to that true freedom. Henry, a free Black man, invests himself in bringing their goal to fruition even if it costs him his marriage.

Earlier this year Smith spoke with Salon about her interest in "reclaiming and restaging American history to bring people into the center of it who have not traditionally been put there." This storyline fits that mandate, and without being forced. The real Higginson probably wasn't a mess of cringe-tastic political correctness; we can assume he wouldn't have asked Henry to say he was "invited" for an audience with him instead of "summoned" to make him feel better about having a Black subordinate. ("I like to leave you the optionality. Keep it loose!" Ebert delivers with grace and a noticeable awkwardness.)

But we can picture him failing to advocate for the Black men under his command because that's how these situations have always played out.

He's also the bridge linking the intersection between the regiment's struggles and Emily's. She sends him her poems, and he's knocked sideways by her command of language. He doesn't see that she's embroiled in her own war, one that the law is determined for her to lose.

In the penultimate episode Emily is reminded yet again that despite advocating for her father in his divisive conflict with Emily's brother Austin (Adrian Blake Enscoe), and despite Austin's irresponsibility and disrespect toward his wife and Emily's great love Sue (Ella Hunt), Edward still views his bright daughter as less worthy to be his heir than his son.

This revelation is presented in tandem with the 1st South Carolina Volunteer Infantry's realizing the government will never see these men as capable of handling weapons, only capable of dying for their cause. They can't wait for permission to bear arms. Like Emily, Henry and the regiment have to take matters into their own hands to safeguard their right to remain alive under a stifling patriarchy.

Whenever "Dickinson" takes grand license with its heroine's history my appreciation for this show is renewed. It's one of those sparkling gems that's likely to be appreciated more broadly in its afterlife, especially as Steinfeld's stardom grows. Her role in "Hawkeye" has a higher profile, as most in the Marvel Cinematic Universe do. More viewers have an interest in superhuman archers than in an extraordinarily talented poet who actually walked the Earth. We get it!

But this is the story of a poet like no other, a woman who used her words to interrogate her inner life and the universes it held. Her verse is a lamp shedding light upon the mysteries of being human. One suspects she'd find no fault with her fame being used to realize untold and underappreciated stories, in the same way Sojourner Truth may have been tickled to be portrayed as a woman whose name is synonymous with confidence, and who makes a revolutionary's life look fabulous.

The finale episode of "Dickinson" debuts Dec. 24 on Apple TV+, where all of its seasons are currently streaming.