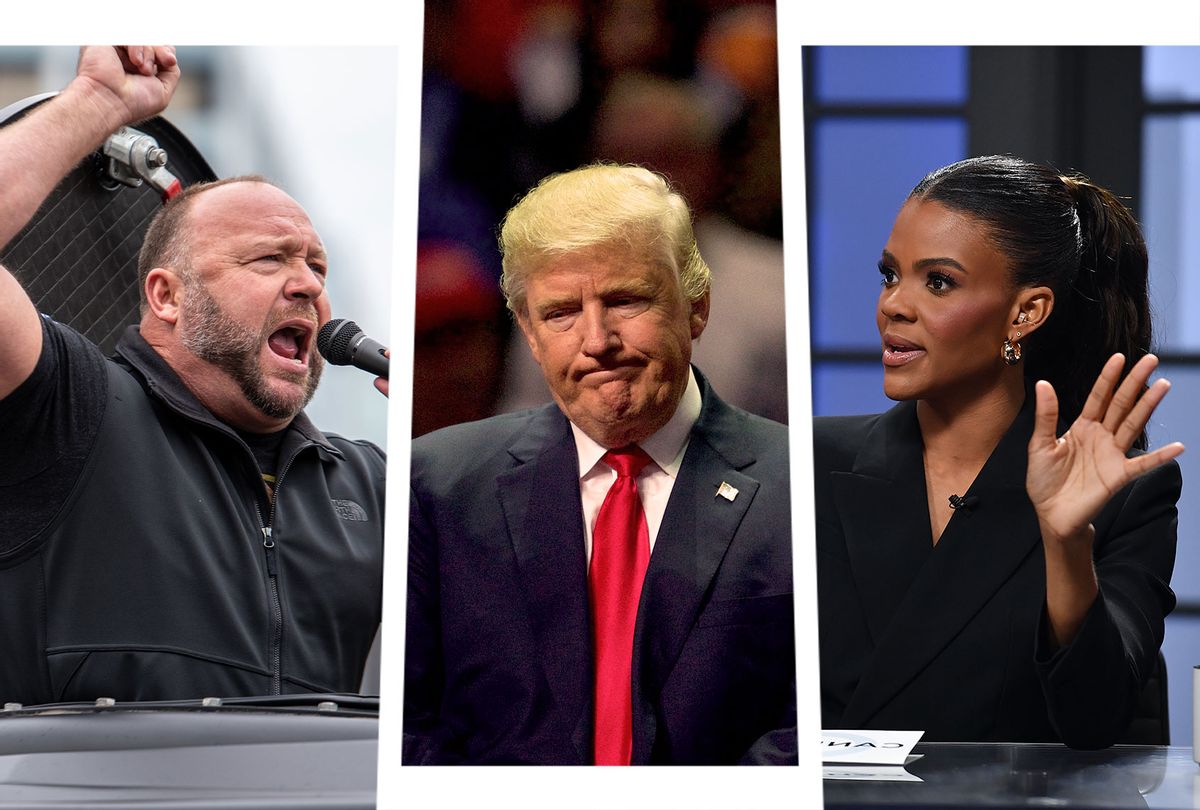 Donald Trump is going to run in 2024. He's going to try to steal the election again — and he has an extremely good chance at succeeding. With people in power unwilling or unable to save us, it's tempting to hope for some completely random happenstance to come in and fell Trump before he completes his grim march to a 2024 takeover. That is why, no doubt, there was a flurry of excitement over the holiday weekend when the MAGA faithful did what many on the left thought was impossible: flipped out on Trump.

Naturally, the source of right-wing anger at Trump was over the one good thing he's done: telling his base that it's good for people to get vaccinated against COVID-19. A week before Christmas, he got booed at an event after saying the vaccine was good, mostly because he wanted to take credit for it. When Trumpist grifter Candace Owens interviewed him a few days later, Trump rejected her anti-vaccine stance and insisted, correctly, that "the vaccine works" because "people aren't dying when they take the vaccine."

RELATED: Reports of a "diminished" Trump are greatly exaggerated — he can ride the Big Lie to a 2024 win

Because of this, folks across MAGAland are panning Trump for what is actually a very mild pro-vaccine stance (he still opposes mandates). Their language is sometimes surprisingly forceful.

Alex Jones called Trump "one of the most evil men who has ever lived" in response. "Stop the Steal" rally organizer Ali Alexander begged Trump to stop and called him "boomer level annoying." An angry group of red hats protested at Trump Tower in Manhattan, shouting that Trump is a "fraud" if he keeps up the vaccine-positive talk. Even Ben Garrison, the weird-but-loyal Trump cartoonist, got angry with his idol over this.

never thought i would see the day ben garrison turned on trump pic.twitter.com/6S89RL9UXz

It's an exciting thought, that this vaccine thing would split the Trumpian base and demobilize his support. Alas, it will never actually happen.  For the fascist right, Trump remains their best bet for a takeover in 2024. As much as they might be irritated with him over his vaccine opinions, they will never abandon him, not as long as he's useful to them.

One can already see the MAGA leadership making up excuses for Trump's deviation from anti-vaxx orthodoxy. Owens is arguing that people his age "came from a time before TV, before internet, before being able to conduct their independent research." Owens may not know TVs were commonplace by the 1950s, but she knows her audience will accept this as an excuse to be both anti-vaccine and pro-Trump. Mike Lindell is clinging to the fact that Trump is still anti-mandate. Lin Wood is claiming that the pro-vaccine rhetoric is Trump's supposedly brilliant "wartime strategy," which will all become clear in due time.

Trump tends to stick to right-wing culture war doctrine in public, even if — as he does when he calls Christian ministers "hustlers" behind their backs — he doesn't believe a word he's saying. So it is a little surprising that he doesn't just follow the path of his buddies at Fox News, who clearly have all gotten vaccinated before they go on air and encourage their viewers to keep rejecting the shot. Part of it is no doubt because of Trump's all-consuming narcissism, and his desire to get credit for a vaccine that was actually developed by scientists and researchers. It's also likely Trump is starting to sweat the fact that a lot of his followers might die off before they get a chance to vote for him. After all, deep red counties now have a COVID-19 death rate that is six times that of deep blue counties. Trump was already obsessed with how blue cities tipped swing states like Michigan and Pennsylvania to Joe Biden in 2020. He's likely acutely aware that blue areas are experiencing much better survival rates than red areas in those very same states.

Setting aside the ridiculous and overheated rhetorical strategies of the right, what we see between Trump and his critics comes down to a strategy disagreement. The anti-vaxx crowd is betting on the ongoing pandemic to demoralize Democratic voters. They hope the drop in turnout from disillusioned Biden voters will outstrip their own losses from COVID-19 deaths. Trump, who tends to have a more single-minded obsession with demographics, seems more worried that the die-off is reaching the point where it might affect electoral outcomes. Neither side, of course, actually cares about the people who are dying, who are seen as little more than collateral damage.

Political alliances, especially on the right, very rarely break apart over strategy disagreements. We shouldn't expect that to happen here. And support for Trump is still mainly one of strategic value to his followers. Despite the often over-the-top gestures of Trump worship on the right, ultimately, the movement simply isn't about him. (Even if he very much wants to believe otherwise.) His own followers often seem quite bored by him. He's a couple of years away from running, and so he's got anemic attendance at his rallies and his talking tour with Bill O'Reilly.

But all that means is that even loyal redhats don't see the point of spending time with Trump in an electoral off-year. Showing up at a Trump rally isn't about experiencing Trump's charm, which is non-existent. It's a show of force, about sending a signal to the rest of the country that the right has the numbers and the will to fight to gain total power. Once it becomes politically potent to do so again, they will turn out for Trump. Indeed, suffering through Trump droning on is a sacrifice to demonstrate their level of commitment. Just as refusing vaccination and risking death from COVID-19 is about demonstrating commitment to the MAGA cause.

Trump supporters have always been more anti-Democrat than they are pro-Trump. He's just an obnoxious weapon to wield against the Democratic majority, and his annoying personality is beloved mainly for his power at "triggering" the liberals. Trump's pro-vaccine talk will, like his clear disdain for Christians and members of the military, ultimately be a thing that most of his followers decide they can live with. As long as they can use him, expect the right to keep backing Trump.