A second civil war: One year after Trump's violent insurrection, how worried should we be? 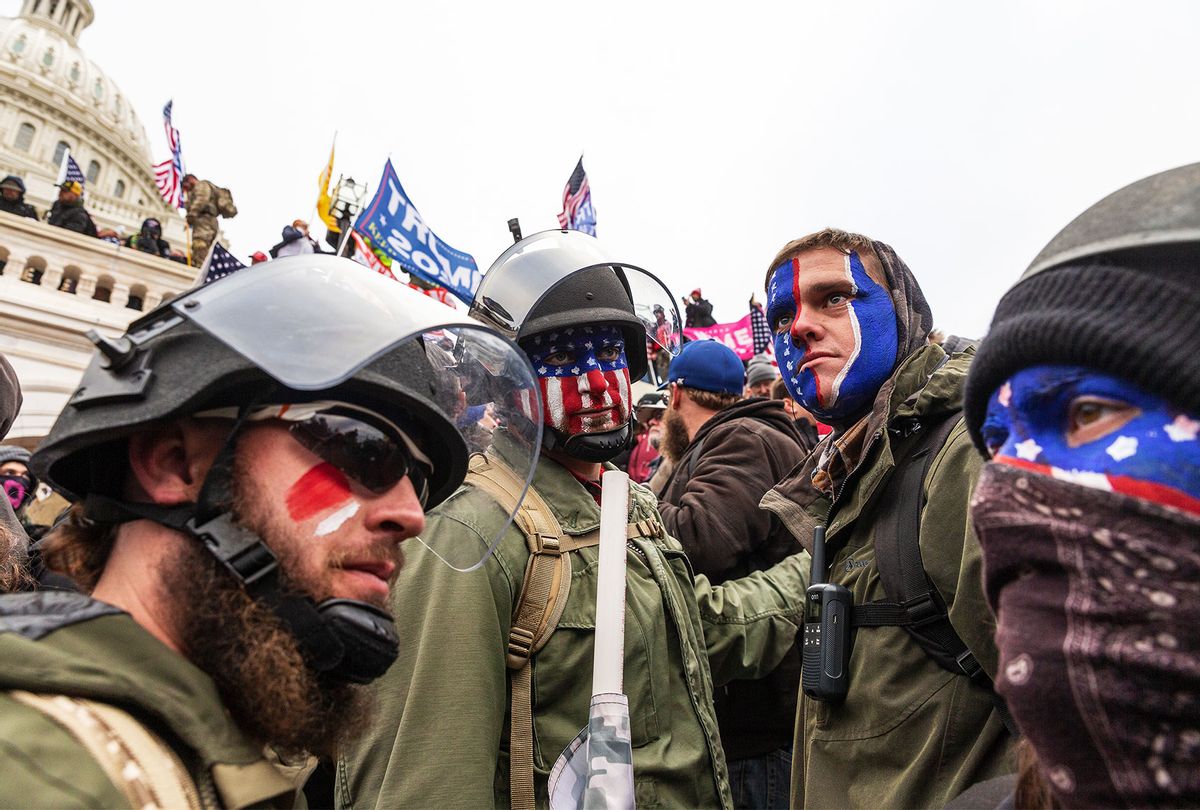 Pro-Trump protesters trying to enter Capitol building. Rioters broke windows and breached the Capitol building in an attempt to overthrow the results of the 2020 election. (Lev Radin/Pacific Press/LightRocket via Getty Images)
--

To no one's surprise, Donald Trump wanted to use the anniversary of the insurrection he incited on January 6 to incite more violence. To commemorate the day when he sent a violent mob to the Capitol to intimidate then-Vice President Mike Pence into refusing to certify Joe Biden's electoral win, Trump scheduled a press conference at Mar-A-Lago. The content wasn't hard to predict: self-pitying claims to be the "real" winner of the 2020 election, racist insinuations that voters of color who had backed Biden are illegitimate, and inciting more violence by lauding the insurrectionists as martyrs and political prisoners. The whole thing was causing all manner of hand-wringing about media responsibility not to air Trump's violence incitement live vs. the responsibility to cover this important news event.

Then suddenly, Trump canceled the press conference. He incoherently blamed "the total bias and dishonesty of the January 6th Unselect Committee of Democrats, two failed Republicans, and the Fake News Media" for the decision. It didn't take long for the truth to come out: Republican leaders were begging him not to do it. Axios reports that "several key allies — including hardline Fox News host Laura Ingraham and Sen. Lindsey Graham (R-S.C.) — made clear they thought it was a bad idea to invite the national media to Mar-a-Lago to mark the deadly riot."

RELATED: Why Donald Trump exalts Kyle Rittenhouse: Nothing gets the base going like violence

Graham confirmed this reporting to Axios, and his reasoning was quite telling: "[T]here could be peril in doing a news conference. ... Best to focus on election reform instead." ("Election reform" being one of the many euphemisms Republicans use for rewriting laws to make it easier to steal elections.) His argument cuts to the core of the internal struggle over strategy in the GOP.

Institutional Republicans have fully come on board with Trump's plan to steal the 2024 election. But they remain conflicted with Trump over whether or not violence is the best way to make that happen. Trump gets caught up in his violent fantasies, which he correctly believes are shared by a huge chunk of his base. Republican leaders, however, feel that stuff backfires. Arguments like the one floated by Graham suggest they think it will be easier to end democracy with paperwork, rather than guns. They are busy rewriting state election laws so they can throw out any results they find displeasing, all while pretending to be a normal political party to the media, so that they don't get called out on it. The idea is to gut democracy in such a way so that the majority of Americans don't even know it happened. Violence interferes with that plan.

Most people, including journalists, assume guns and bombs are what makes a coup a coup. A bloodless coup is, in fact, quite likely to be covered as not a coup at all — and therefore more likely to be accepted, however reluctantly, by the public.

Thursday is the one-year anniversary of the Capitol riot that left five people dead and dozens of officers injured, some quite severely. The coverage of this anniversary has largely focused on the threat of future violence. Multiple outlets commissioned polls meant to measure Republican propensity for violence and the results — such as 30% of Republicans hinting that they're open to future violence — have generated plenty of alarming headlines. Meaty long-form stories about our current dilemma — such as a piece titled "How does this end?" by Zack Beauchamp of Vox and "Trump's Next Coup Has Already Begun" by Barton Gellman of the Atlantic — are peppered with alarming quotes from political scientists worried about a bloody civil war. Our Canadian neighbors are even openly worried about the possibility of the U.S. devolving into violence.

The threat of political violence is, make no mistake, quite real. And yet, I remain skeptical that the U.S. is going to see anything like a full-blown civil war. After all, a huge chunk of Americans has been nurturing fantasies of civil war for a long time. Mostly, they don't act on it, having neither the courage to do so or any sense of what such violence would actually accomplish. And the reality is that most Republicans are too old and comfortable to imagine throwing it all away for some violent revolution. Even the January 6 insurrectionists only acted because they clearly didn't realize that legal consequences would follow. Most of them even left their guns at home, figuring that would be the only thing they'd get in trouble for. Republicans may have most of the guns, but they know full well that their political opponents are, on average, younger and healthier. That puts them at a huge disadvantage in a physical conflict.

More importantly, it's not clear what widespread violence would actually accomplish, outside of making Trump gleeful as he sits in the safety of his own home, watching people put their lives on the line for him. On the contrary, it's still the rule of thumb in American politics that those who resort to violence end up losing support. Fox News hyped the hell out of the extremely rare occasions of violence at Black Lives Matter protests precisely because they knew it was the best way to discredit the movement. Polling shows strong majorities of Americans disapprove of the Capitol riot. That's why Republican leaders and pundits go out of their way to minimize the violence of that day, and, when they can't pull that off, they pretend to oppose it. Republicans know their best way to grab power is to lean into a press that is desperate to normalize them, and disassociate themselves from the violence of January 6.

To be clear, just because we're unlikely to see an all-out civil war doesn't mean violence isn't a threat. There are just too many leaders — including Trump — who are too infatuated with doing things like exalting vigilantes such as Kyle Rittenhouse as heroes. We should be prepared for a constant drumbeat of self-directed terrorism from the right, much of it politically incoherent and useless for advancing Trump's political goals, such as the mass shooting in Denver over the holiday that left five people dead. But organized armies of right wing yahoos will remain more of a fantasy than a reality.

Instead, the real threat is the one Lindsey Graham is offering: The paperwork coup.

As Beauchamp argues in his piece, we're like to see something like what happened when authoritarians took over Hungary. "The change was subtle and slow — a gradual hollowing out of democracy rather than its extirpation," he writes, noting that high profile fascists like Tucker Carlson see Hungary as the ideal model. The appeal of the paperwork coup is that one can end democracy without the mainstream media ever coming out and telling the public that it's happened. Instead, you get stories with quotes from Democrats warning that democracy is ending vs. Republicans claiming they're trying to "save" it. Cowardly reporters will throw up their hands and pretend there's no way to know who is telling the truth, rather than bluntly tell readers that Republicans are simply lying.

Even Trump sees this, which is why he reluctantly agreed to call off January 6 celebration event. He loves a violent spectacle, but he loves power even more. So he'll keep the hyping violence for his rallies, and allow the Republicans to pretend to journalists that they are not plotting alongside Trump to overthrow democracy.

In a lot of ways, the GOP strategy is far more sinister than openly advocating for the violent overthrow of democracy. After all, a bloodless coup is far more likelier to work.