Despite certain updates, this carbon copy series doesn't do justice to the charismatic Hilary Duff and Chris Lowell 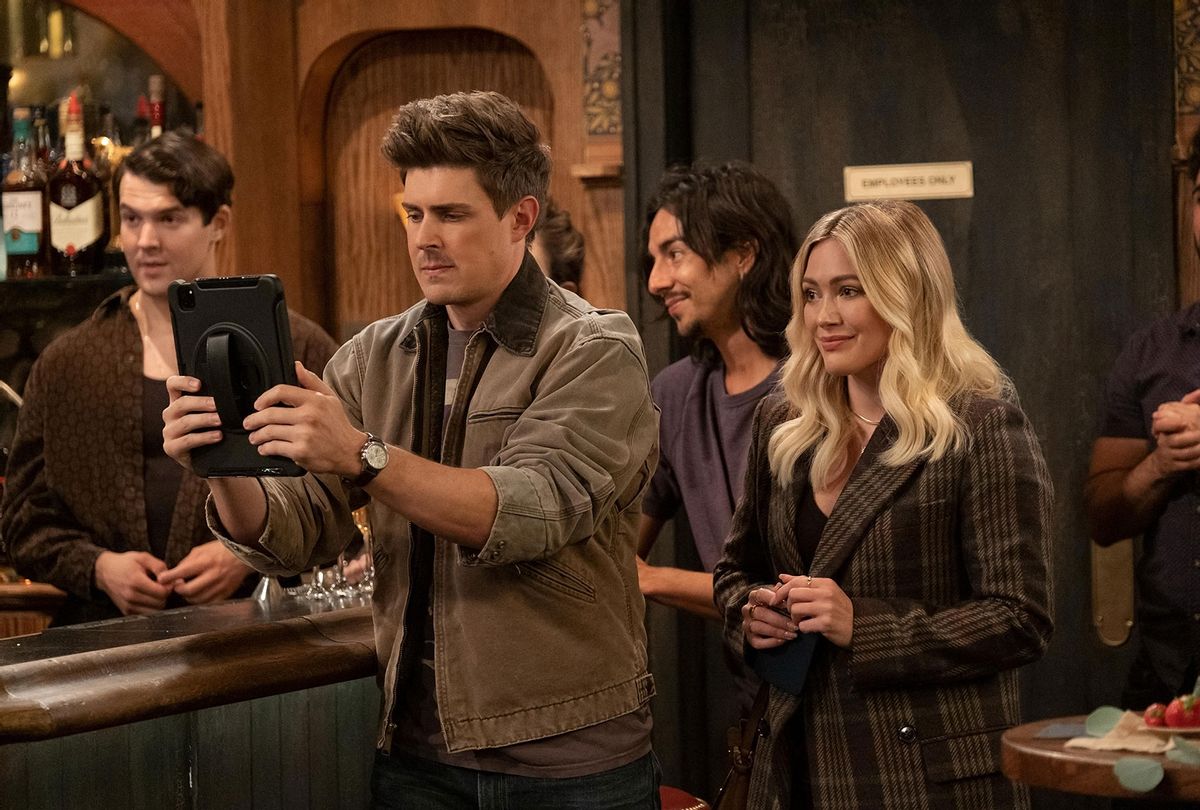 The experience of "How I Met Your Father" – and I use the word experience intentionally since, as I will explain, this is not a show one simply watches – has a lot in common with a terrible cover version of a solid pop song hitting you for the first time.

We're talking Miley Cyrus' rendition of "Smells Like Teen Spirit" awful, or wrongdoing on par with Alien Ant Farm afflicting Top 40 radio with its version of "Smooth Criminal."  You don't have to be a fan of the original versions of these songs to know that what these artists did to them qualifies as misdemeanor assault.

The same holds true for Isaac Aptaker and Elizabeth Berger's modern contribution to the Book of "How I Met Your Mother," a sitcom that ended poorly enough to be forgotten, more or less, by those who watched faithfully when it was on.

Remember all the fuss that accompanied the various "Friends" anniversaries? That was denied "HIMYM" although, and likely because, the two series had much in common. Both featured entirely white casts of 20-something professionals trying to establish their careers and find romance in whitewashed versions of New York, filmed on Southern California backlots.

Each wrung mileage out of its principal characters' romantic pairings, mainly with a parade of other conventionally hot and mostly white guest stars. "HIMYM" differentiated itself with its gimmickry – the various slap contests, the entirety of Neil Patrick Harris' playboy Barney Stinson – one of several aspects about its humor that aged poorly alongside jokes that were ill-conceived in the first place, like season 9's yellowface episode.

"HIMYM" diehards stuck with it through seasons' worth of diminishing returns nevertheless because Craig Thomas and Carter Bays struck paydirt with an ensemble of charismatic actors playing lovable, relatable characters.

Well, that and the promise that the show would deliver a satisfying answer to the mystery upon which the entire series is predicated – the identity of "the mother," aka the woman about whom Future Ted (voiced by the late Bob Saget) rambled on about with his kids for nine seasons.

When the final reveal turned out to be that the show actually should have been called "How I Took Millions On a Decade-Long Ride To Get My Kids' Permission to Bang Aunt Robin," people were quite understandably finished with it forever. ("Fool me once..." et cetera.) This is likely the reason for the lack of awe-stricken reports about its popularity in syndication or on streaming platforms, or bidding wars over the rights to its 208 half-hours, now available on Hulu.

Like its NBC counterpart, this was a fine fantasy about #adulting. Unlike the adventures of Ross, Rachel and the rest, Ted, Robin, Barney, Marshall and Lily are more caricature than original creations whose speak in contrite dialogue snippets jammed down our ear holes with a canned laughter chaser.

While "How I Met Your Father" corrects several shortcomings of its predecessor starting with its inclusive cast, its producers adamantly refuse to abandon that part of the formula. Hence that descriptor of experiencing its failure as opposed to simply watching its heroine Sophie (Hilary Duff) meet cute with a pair of new guy friends, Jesse (Chris Lowell) and Sid (Suraj Sharma) who may or may not end up being the "Father" by the end of this mess, whenever that comes.

But Sid is in a long-distance relationship, and Jesse is still recovering from an embarrassing video of him going viral. He's also hosting his sister Ellen (Tien Tran), who is newly arrived from the Midwest and freshly divorced, setting him up as the "will they/won't they friend."

Their first quippy exchanges have the effect of someone leaning into your face and whispering the word "moist" over and over again. It's a legitimate adjective but one that disgusts enough of the world's population that wordsmiths stretch for other ways of describing snack cakes and basements.

Proposed versions of "How I Met Your Father" were bandied since the cancellation of "HIMYM," including one that would have been helmed by Greta Gerwig, the writer and director of the Oscar-nominated "Little Women." That's something I would have liked to see. This is not to disparage Duff's acting ability in the least; the sad part is that she has the charm to pull off a version of this show written with slightly more naturalism and intelligence. Lowell, too, has an appeal that dates back to his "Veronica Mars" days and slides easily into this friend-zone role. The stilted, overly stylized writing and set-ups are beneath both their abilities.

Aside from incorporating a few racy elements that never would have made it through CBS' standards and practices department, like a visual gag involving a technologically advanced sexual aid for men, its main change is that Tinder features prominently. You know, the same as in every show about the difficulties of mating and dating in in today's world. 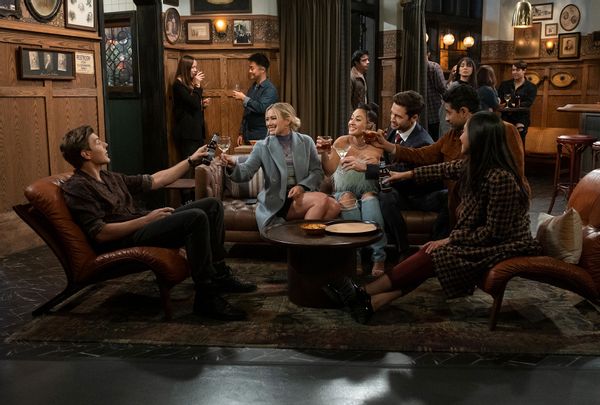 Beyond that the bar scene is still alive and disappointing. Fortunately, Sophie has her Marshall equivalent in Valentina (Francia Raisa), who, despite being a New York stylist (because who needs lawyers anymore?), ends up Donald Ducking it in public for no good reason for most of the opening episode. (She's dating Tom Ainsley's Charlie, a "to the manor born" British guy who somehow escaped ever having to take the tube or experience unpleasant scents.)

Another switch is that we see our narrator Future Sophie, played by Kim Cattrall, instead of merely hearing her; it's her son who remains offscreen this time. But as wonderful as it is to see Cattrall in a New York separated by "And Just Like That" by the span of an entire country, her asides are more distracting than anything else. The mystery son keeps moaning about her wine-soaked ramblings, which doesn't make the 2022 version of her life any funnier.

This is one of several reasons the wan comedy defies classic TV debates about what constitutes a reboot versus a revival. Reboots share a premise with the original property versus the revival's shared continuity. "How I Met Your Father" squishes aspects of both together, returning to the same diluted version of New York with a few more people of color and a queer character, and placing one of them in a very familiar-looking apartment.

But other than the main characters holding gigs that didn't exist in 2005 (Sophie is a street photographer and Jesse's an Uber driver), most of the show amounts to a gender bend on the same old lyrics – a cover version of an architect's sentimental search for lifelong partnership.

Wonderful cover songs abound, of course. To continue that conversation about thematic refrains between eras, "How I Met Your Father" could have easily been the TV equivalent of No Doubt's 2003 rendition of Talk Talk's "It's My Life," released in 1984. The melody and lyrics are the same. It's the delivery that individualizes each, with tonal differences that make Gwen Stefani's take invigorating and upbeat where Mark Hollis' original has a doleful air.

But "How I Met Your Father" never takes such pains to distinguishes itself quite so well. Instead its shortcomings remind us of why there's been relatively little clamoring to revisit that old CBS comedy that ended up letting us down. We've seen this story before and better versions of it since life moved on, making the writers' choice to retrace its dated habits so odd.

It's kind of like Sophie's habit of sadly singing along to Train's version of "Drops of Jupiter" whenever her heart gets broken. That song is also 20 years old, and Taylor Swift's moving, updated cover version is right there. Maybe the message is that there's no reason to mess with the timeless potency of a classic. When it comes to a show that has yet to fully achieve that designation, "How I Met Your Father" proves there certainly is.

The first two episodes of "How I Met Your Father" are currently streaming on Hulu. Watch a trailer for the series below, via YouTube.