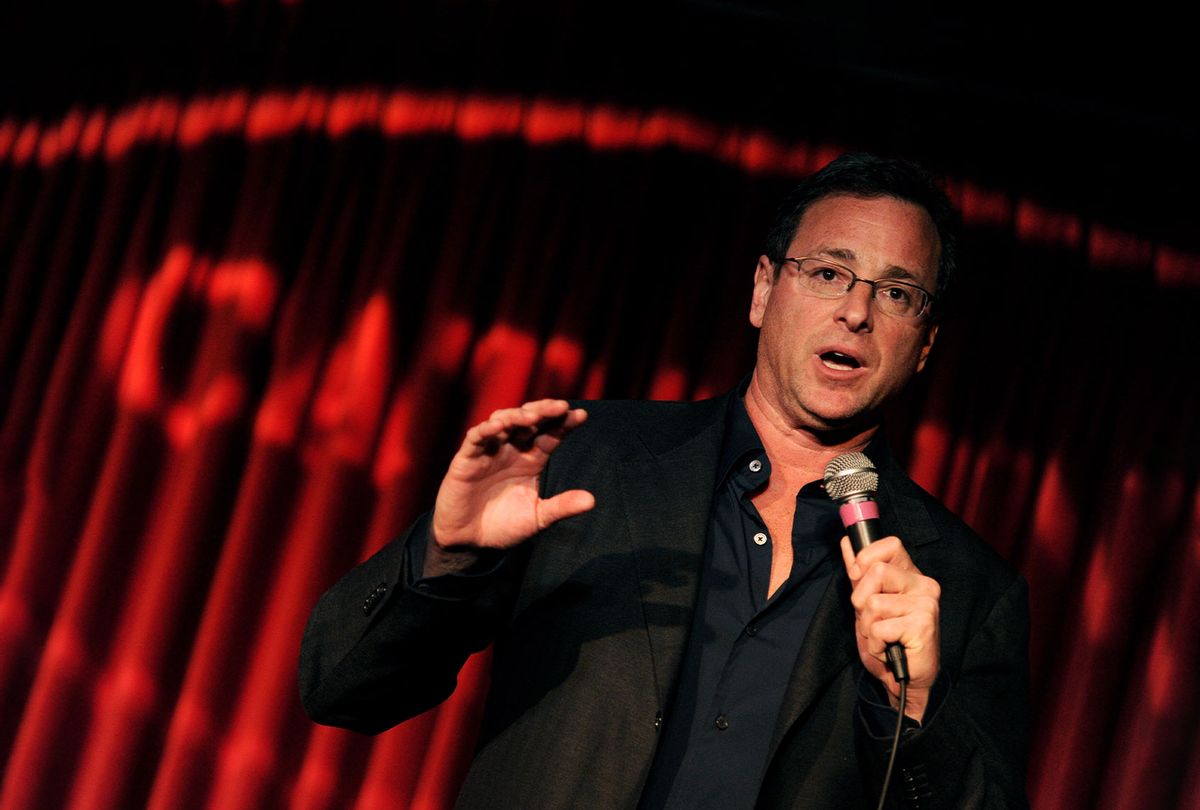 Comedian Bob Saget performs at the Alliance for Children's Rights "Right to Laugh" fundraiser at the Catalina Club on March 15, 2010 in Hollywood (Kevin Winter/Getty Images)
--

If all you ever saw of Bob Saget were clips from his performances as Danny Tanner on ABC sitcom "Full House," you might think he was merely a milquetoast entertainer. Even when he was introducing a clip of some poor schmuck taking a blow to the groin as the host of "America's Funniest Home Videos," his wisecracks were decidedly G-rated. For more than a decade in the late 1980s and 1990s, he delivered wholesome chuckles that were safe for the entire family.

Saget died unexpectedly on Sunday from unknown causes, and the outpouring of grief from his former co-stars and fellow comedians suggests that the late Jewish comedian was definitely, in the words of his "How I Met Your Mother" co-star Josh Radnor, a "mensch among mensches." Mary-Kate and Ashley Olsen, his "Full House" castmates, called him "the most loving, compassionate, and generous man."

There was much more to his comedic persona, however, than family-friendly TV gags. In his stand-up, Saget could be absolutely potty-mouthed, to use a term his easygoing "Full House" character might have used. He was a lot like Buddy Hackett, who could charm his way through a children's movie and goof around singing "Shipoopi," then make a sailor blush with his stage act. To truly understand Saget's talent, you have to appreciate the darker elements in his work.

Comedy, like charity, often begins at home, and in Saget's childhood home the comedy was usually uncensored. His father Ben, a supermarket executive, was a devotee of dirty jokes, which he wasn't afraid to share with his young son.

"A&P and Stop and Shop are merging," the elder Saget said, his seemingly innocent Dad Joke setup practically begging for its juvenile punchline: "They're calling the new store Stop and Pee."

Coarse humor helped Ben cope with the echoes of a difficult life in which he lost two newborn children to dysentery and three of his five siblings to early heart attacks, then suffered two heart attacks himself.

"My family saw so much death and drama over the years," Saget wrote in his memoir, "it was like we were always waiting for the next tragedy to arrive."

Their answer to all that tragedy was comedy, which Saget embraced at a very young age. During his middle school years, when the family lived in Los Angeles. Saget would ask his mother to drive him to a local nursing home so he could spend time with one of his earliest comedic heroes, Larry Fine of the Three Stooges. He would listen to Fine's endless stories about the fractured ribs and broken noses he sustained while doing slapstick.

Ben's job eventually took the family back to Philadelphia, where Saget had been born. After graduating high school, he thought he ought to do what any good Jewish boychik would do: go to college and become a doctor. His English teacher, however, pulled him aside and demanded that he become a performer.

"You need to make people laugh," she told him. Saget listened, enrolling in Temple University to study film.

He started doing stand-up around Philadelphia while he was still an undergraduate. On occasion, Saget would take the train to New York to do a short set at the Improv and Catch a Rising Star. His early material was clean, but offbeat. He would get on stage to perform "While My Guitar Gently Weeps" with a water bottle hidden behind his guitar so he could make the guitar start "crying" while he played it. The crowd's laughter made his wet jeans on the long train ride home well worth it.

After he graduated, Saget moved back to Los Angeles, intending to get his master's degree in film at USC, but he kept doing stand-up instead. He soon became a regular at Mitzi Shore's Comedy Store, where he fell in with comedians like David Letterman, Jay Leno, Kevin Nealon, Sam Kinison, and Jim Carrey. Saget studied their sets while working on his own, then eventually went out on tour, getting picked up as an opening act for Kenny Loggins.

His first big break came when he earned a slot on "The 9th Annual Young Comedians Special," which premiered on HBO in 1985. The event was hosted by Rodney Dangerfield, who soon became a mentor for the young comic. "He was always encouraging to me," Saget wrote. The two men became so close that when Dangerfield died, Saget officiated his funeral.

Within two years, Saget joined the cast of "Full House" as a replacement for the series' original lead. The show, which revolved around a widower raising three daughters with the help of both his brother-in-law and his best friend, was widely panned by critics. Howard Rosenberg called it "an argument for birth control" in the Los Angeles Times. Fans, however, found Saget endearing for eight full seasons.

"For people my age," tweeted Mindy Kaling, "he was the original Hot Dad."

In 1989, Saget became the host of "America's Funniest Home Videos" as well. (He worked on both shows simultaneously.) The series, which featured viewer-submitted home video clips of crazy pet fails and human stunts gone horribly wrong — sort of like a pre-internet TikTok — wasn't intended to last very long, but it soon beat out "60 Minutes" in its Sunday night time slot, making Saget a star.

Throughout his successful rise to stardom, tragedy continued to haunt Saget's family. In 1984, his beloved sister Andi died of scleroderma. For the rest of his life, Saget raised money for research and to help those suffering from the disease. A few years later, his first wife Sherri flatlined after a difficult C-section. Her doctors managed to revive her, but the scare shook Saget to his core.

Before long, he discovered a need to cope with his pain the same way his father did: by indulging in darker humor. He started to blow off steam by telling raunchy jokes privately among friends. Eventually hIs standup became more and more blue as well. In 2007, Saget filmed his own HBO special, "That Ain't Right," which revealed his more vulgar side to many of his old "Full House" and "America's Funniest Home Videos" fans for the first time.

Saget wasn't a storytelling comedian. He cracked jokes. He was matter-of-fact in his delivery, talking to his audience like he was just riffing in his living room with his friends. His casual, middle-class persona — Saget generally came across as a nice Jewish boy — created a sharp contrast with his material. His jokes were funny in and of themselves, but they weren't what you expected from a guy like him, and that made them even funnier. Watching him work was like eating a big slice of forbidden fruit pie.

Saget's best-remembered instance of working blue was his appearance in "The Aristocrats," a 2005 documentary about one legendarily transgressive joke told by dozens of famous comedians. The joke starts with a seemingly innocuous opening — "This family walks into a talent agent's office . . . " – and ends with the talent agent asking, "What do you call the act?" followed by the family's answer: "The Aristocrats!"

What happens between those two points is what makes the joke work. The middle section varies from comedian to comedian, but it's usually a couple of sentences of foul-mouthed improvisation designed to make an audience squirm a little bit.

RELATED: "Head of the Class" and the man behind the '80s comedy's progressive, even radical agenda

Contemporary audiences might actually know Saget's voice more than his face. From 2005 to 2014, he provided the voice-over narration for the CBS sitcom "How I Met Your Mother." After publishing his memoir "Dirty Daddy" in 2014, Saget returned to the role that launched his career, reprising his performance as Danny Tanner on "Fuller House," a Netflix-produced sequel to the original series that ran from 2016 to 2020.

In the days before his untimely death, Saget was back out on the road doing stand-up, just as he'd always done, developing new material. "I'm back in comedy," he wrote on Instagram, "like I was when I was 26." Sadly, after two final performances in Orlando and Jacksonville, tragedy visited Saget once more.

John Stamos, his "Full House" co-star, wrote in an Instagram post that Saget "made us laugh until we cried. Now our tears flow in sadness, but also with gratitude for all the beautiful memories of our sweet, kind, hilarious, cherished Bob."