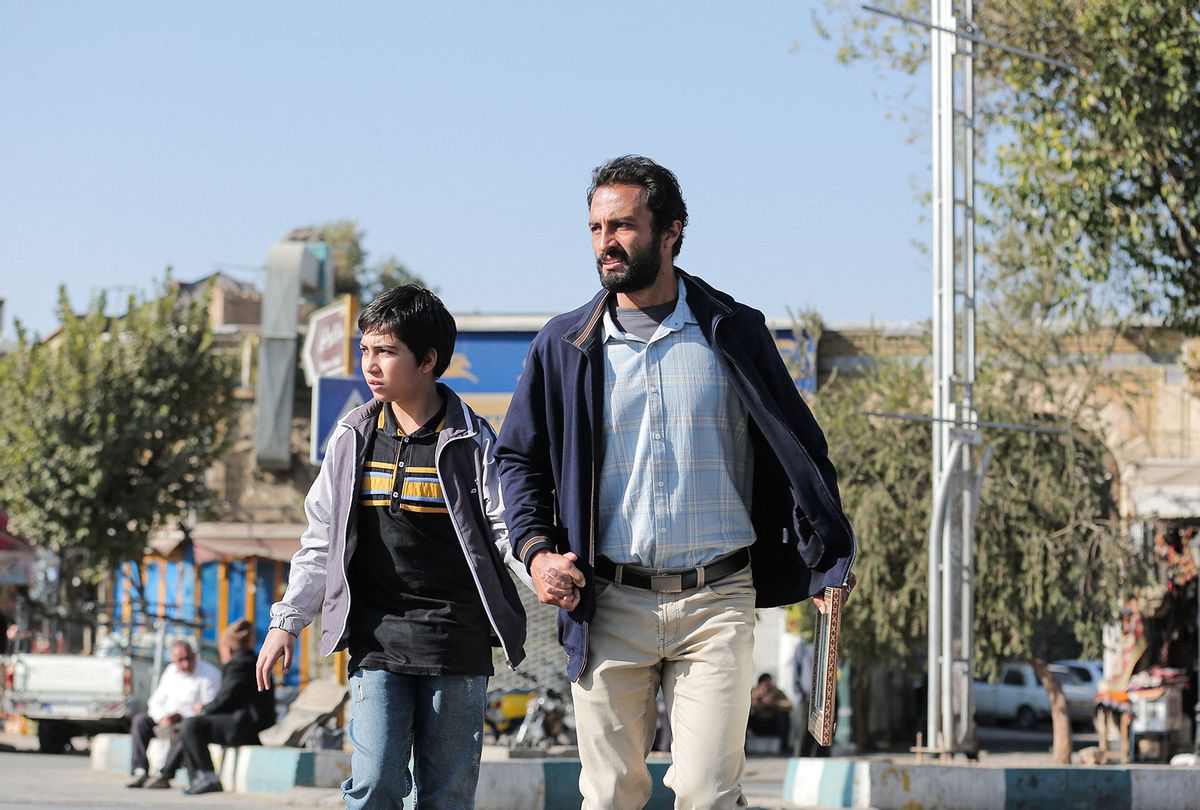 Asghar Farhadi ("The Salesman") delivers another knotty morality tale with his superb new film, "A Hero." Shortlisted for the Best International Film Oscar, and winner of the Grand Prize at the 2021 Cannes Film Festival, this heartbreaking drama shows the ripple effect of a simple lie and how a good deed may not necessarily redeem bad behavior.

Rahim (Amir Jadidi) has been in a debtors' prison for three years because he owes Bahram (Mohsen Tanabandeh) 150,000 tomans. Given two days leave, Rahim and his girlfriend, Farkhondeh (Sahar Goldust) plan to sell 17 gold coins that were discovered in a purse she found at a bus stop. The couple hope that if Rahim uses those coins to repay half of his debt to Bahram, his creditor will accept a bond for the balance, and he will be free from jail. However, when the coins are not worth as much as they hoped, Rahim makes the conscientious decision to coordinate the return of the purse and its contents to its rightful owner. (Because he is returning to prison, he cannot meet the woman directly).

The noble act makes him a hero, and garners Rahim some media attention. While he tells the prison authorities the truth — that Farkhondeh found the purse but he cannot reveal her name or their relationship — Rahim is told to lie about that detail. His good deed shows a lack of self-interest, which helps his cause. Sure enough, Rahim becomes celebrated for his honesty. A charity association that helps the destitute awards Rahim with a certificate of merit and raises money for him to pay back his creditor. Moreover, they help coordinate a job for him to earn money to pay the outstanding balance.

RELATED: "About Elly": A masterful thriller – and a portrait of Iran's conflicted middle class

However, Bahram is not convinced of Rahim's honesty or his story, and he sulks as the charity champions his debtor and asks Bahram to cooperate with forgiving the debt. Yet this seems unfair to the creditor, who explains his reasoning and suffering clearly. Bahram is not wrong, but the film seems to be squarely on the side of Rahim, a man who ended up in debt through bad luck in a business deal. He demurs it was no fault of his own.

But rumors start to circulate regarding the veracity of Rahim's story, and when the charity's council intelligence officer wants to fact-check what transpired, "A Hero" becomes more complicated — and even more absorbing.

Farhadi lets his drama unfold slowly, but his film builds its power as each scene reveals kernels of truth. Details about Rahim's ex-wife may inform some of his actions. Likewise, the prison authorities may be leveraging Rahim's good deed to shift attention away from a recent suicide. In addition, Rahim is a hero to his son, Siavash (Saleh Karimai), who stutters, and the child is often exploited in public to generate sympathy for his father. Viewers will likely recalibrate what they think and believe as each new bit of information emerges, and issues of truth and responsibility become murkier.

The filmmaker is a master of showing the complexity of how a simple situation can spiral out of control. He sucks viewers into this vortex as well, asking them to root for a man who believes in the moral ambiguity of doing right for the wrong reasons and doing the wrong thing for the right reasons. Farhadi does not let viewers off the hook; he implicates them for wanting Rahim to go free even if it means compromising justice.

Rahim is concerned with his honor and reputation; he does not want to be disgraced. However, he often does dishonorable things, from asking people to lie on his behalf to physically attacking Bahram in an especially tense scene. Framed amid a series of glass enclosed shops, this scuffle between debtor and creditor is especially claustrophobic and effective. It is also hard to watch Rahim dig himself deeper by letting his temper take over his emotions.

For someone praised for being selfless, Rahim is, perhaps, really quite selfish. Rahim insists he is being honest, not calculating, but is he really a fraud? Everything Rahim does, from using the prison's phone number in the ad to searching for the owner of the purse to verify his story, comes under intense scrutiny and has unseen implications that can harm others. The filmmaker is creating an allegory about truth and the law and how far someone might go, deliberately, desperately, or guilelessly, to subvert authority for their own means.

Rahim boxes himself into a tight corner and Jadidi is fantastic as the title character, a man who may be his own worst enemy. He benefits from his image as a role model without understanding the responsibility and ramifications his actions. As he sinks further into despair when his morality is questioned, Jadidi informs his performance with the tacit resignation that Rahim may never truly be free.

"A Hero" succeeds because Farhadi never judges his characters. He lets their actions speak for them. As others try to help Rahim, his true colors — along with his innocence, sense of integrity, and self-worth — come to light. This film is a quietly devastating portrait of a man damned.

"A Hero" is currently in theaters and streams on Amazon Prime Video on Friday, Jan. 21. Watch a trailer for it below, via YouTube.