Trump takes control of the Jan. 6 story — while the media and Congress sleep on it

No Jan. 6 hearings until "April or May," Rep. Raskin tells Salon. Now Trump is promising pardons to the rioters 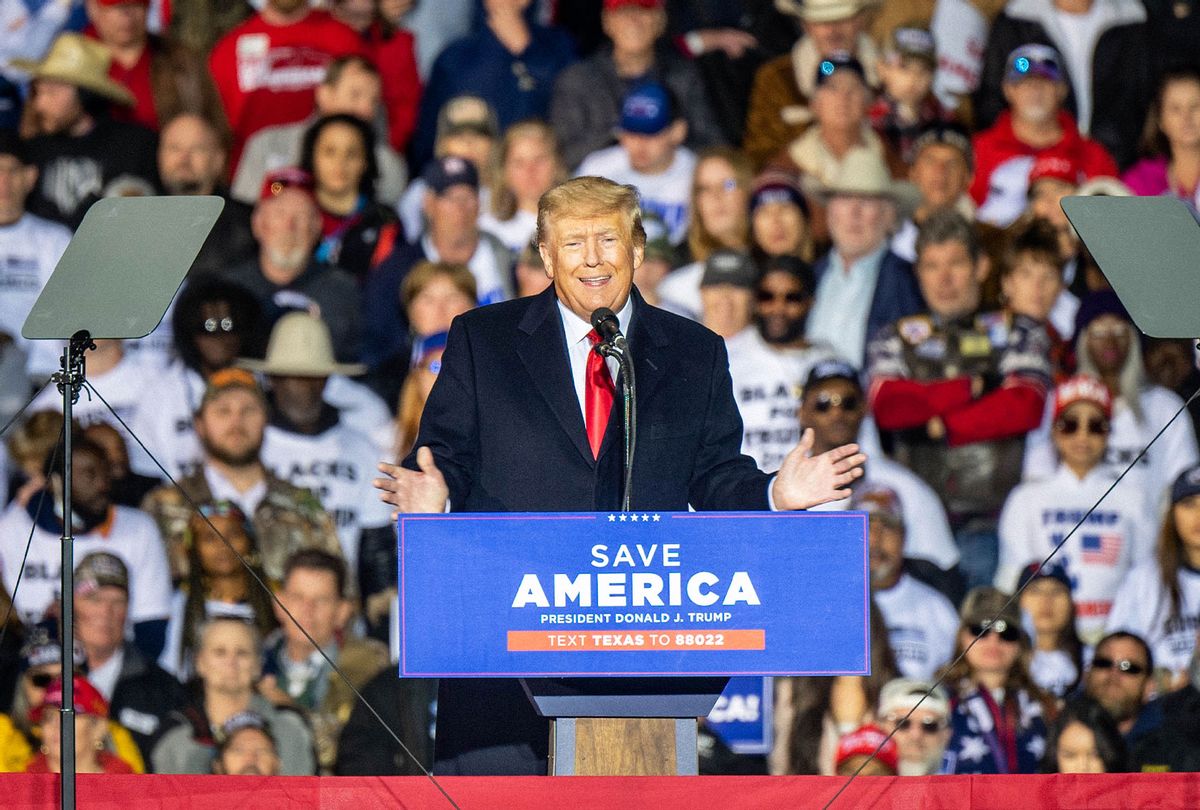 Former President Donald Trump speaks during the 'Save America' rally at the Montgomery County Fairgrounds on January 29, 2022 in Conroe, Texas. Trump's visit was his first Texas MAGA rally since 2019. (Brandon Bell/Getty Images)
--

Over the weekend, emboldened by a cowardly mainstream media and a slow-moving January 6 House Select committee, Donald Trump escalated his efforts to seize control of the story of the violent insurrection at the Capitol he incited last year. At a rally held in Conroe, Texas, on Saturday, Trump painted the insurrectionists as martyrs and heroes, claiming those who have been arrested and charged — more than 700 — "are being treated so unfairly" and promised, "if it requires pardons, we will give them pardons." On Sunday, Trump doubled down, releasing a statement all but confessing he had wished for then-Vice President Mike Pence to overturn the election on January 6.

"Mike Pence did have the right to change the outcome," his statement claimed. "Unfortunately, he didn't exercise that power, he could have overturned the Election!"

The statement makes clear what Trump's intentions were when he incited the people to storm the Capitol on January 6, some of whom were recorded chanting "hang Mike Pence." (Trump has previously defended the chanters.) On Monday, Asawin Suebsaeng of the Daily Beast reported that Trump has been conspiring for months with GOP lawmakers, should they regain control of Congress in the midterm elections, to abuse their power to launch fake "investigations" into January 6 aimed at further confusing public understanding of the riot and painting the insurrectionists as martyrs.

Trump's boldness in trying to rewrite the history of January 6 is horrific, but not shocking. The man has never failed to press an advantage. He has a huge one when it comes to gaining control of the narrative of January 6: There's no one really out there stopping him. The mainstream media is falling behind on the job, failing to treat Trump's downright criminal aggression on this front with the gravity it deserves. Meanwhile, Democrats who ostensibly control Congress and the White House are too slow-moving and cautious in their response, giving Trump the opening to go all-out with his valorization of January 6 and efforts to stoke further attacks on democracy.

The one-year anniversary of January 6 came and went. President Joe Biden marked the occasion with a speech, and plenty of information was leaked to the press, but overall, it simply didn't garner the attention needed to counter Trump's revisionist history. Promises were made that "televised hearings and reports that will bring their findings out into the open," and yet this entire month went by without a single hearing.

Last week, committee member Rep. Jamie Raskin told Dean Obeidallah in a Salon Talks interview that the planned hearings have been pushed back to "later in the spring, April or May more likely." Raskin blamed the delay on people like Trump's former chief of staff Mark Meadows for doing the "hokey pokey." Meadows, who has been refusing to cooperate, received a referral for contempt of Congress in December. Democrats are not rising to the moment. It's been seven weeks and Meadows still has not been arrested by Biden's Department of Justice.

It's tempting to shrug off these delays. One could even argue that maybe it's better to have hearings closer it is to the midterm elections. But this failure to move faster is bad news for democracy. It was entirely predictable that Trump would successfully pressure his lackeys into not cooperating. The failure of the January 6 committee to anticipate that and prepare for it means that they will likely be snookered again — and that "April or May" may come and go with more hearing delays caused by Trump, who now has good reason to believe he will avoid answering for his crimes for the rest of year, to the committee or anyone else. The failure to arrest Meadows, and to get more charges flowing for other non-cooperators, is clearly emboldening Trump even further.

Trump has a very good reason to delay things as much as possible: It gives him an incredible opportunity to shape the narrative. As usual, it's an opportunity he is taking full advantage of. While loyal Democratic voters won't be fooled, low information voters — who also tend to be the swing voters who decide elections — can and already are being manipulated by Trump's disinformation. Both focus group and polling data show that these kinds of voters have no idea how serious January 6 was, or how much the GOP is covering up for Trump's crimes while conspiring to make sure the next coup is successful. Troublingly, even Democratic voters routinely underrate the ongoing risks. The longer Democrats fail to educate voters, the more time Trump has to make sure his lies stick.

But it's not just Democrats. The mainstream media paid very little attention to Trump's escalation over the weekend. When there was front page coverage, the focus was not on the danger of Trump's open and ongoing coup. Instead it was filtered through the "horse race" style of covering politics. The Washington Post ran with "Trump's Texas trip illustrates his upsides and downsides for Republicans and their midterm hopes" while the New York Times had "Trump's Grip on G.O.P. Faces New Strains." Given those headlines, readers might imagine Trump's behavior is mainly a problem for the GOP's midterm prospects, not an open threat to national security and our democracy.

Peter Baker, a preeminent political reporter for the New York Times, acted baffled in a Sunday night tweet as to why there wasn't a bigger public reaction to Trump's statements. "Old enough to remember when it would have been shocking to see a former president admit that his goal was to have 'overturned the Election.'," Baker tweeted.

As many pointed out in reply, a main reason the public seems unaware is that Baker and his colleagues are failing to make them aware. As one Twitter user noted, "Then make it a 96 pt headline on the paper where you work and have influence. The media decides how shocking something is and you know that." Others pointed out that the press was able to make a scandal over the non-story of Hillary Clinton using a private email server, and all but yawn and shrug it off when Trump publicly admits his fascistic intentions. As anyone at a progressive publication can attest, reader interest is there. There might even be more if mainstream media treated it as a scandal instead of a page A24 oddity.

Neither the Democrats nor the media are helpless in the face of Trump's continued provocations. The January 6 committee needs to be smarter about anticipating Trump's tactics, and moving faster to gain control of the narrative. Biden's Department of Justice needs to arrest Meadows. The media could choose to treat Trump's continuing efforts to end democracy with the same five-alarm coverage they gave to Clinton's mundane use of a personal email account.

The public takes its cues about what is important and what is not from leaders and media figures. If journalists and Democrats don't step up more aggressively, then Trump's lies about January 6 will keep gaining more traction. It will get even worse if Republicans control Congress next year, and use their own hearing power to offer Trump's lies an even bigger gloss of mainstream respectability. Every day Trump is allowed to control the narrative, his power only grows stronger.