On "Cheer," Jada Wooten is a role model, despite the narrative of "too much"-ness spun around her

Unlike most "Cheer" athletes, Wooten is a scholar, leader and the latest target of anti-Blackness 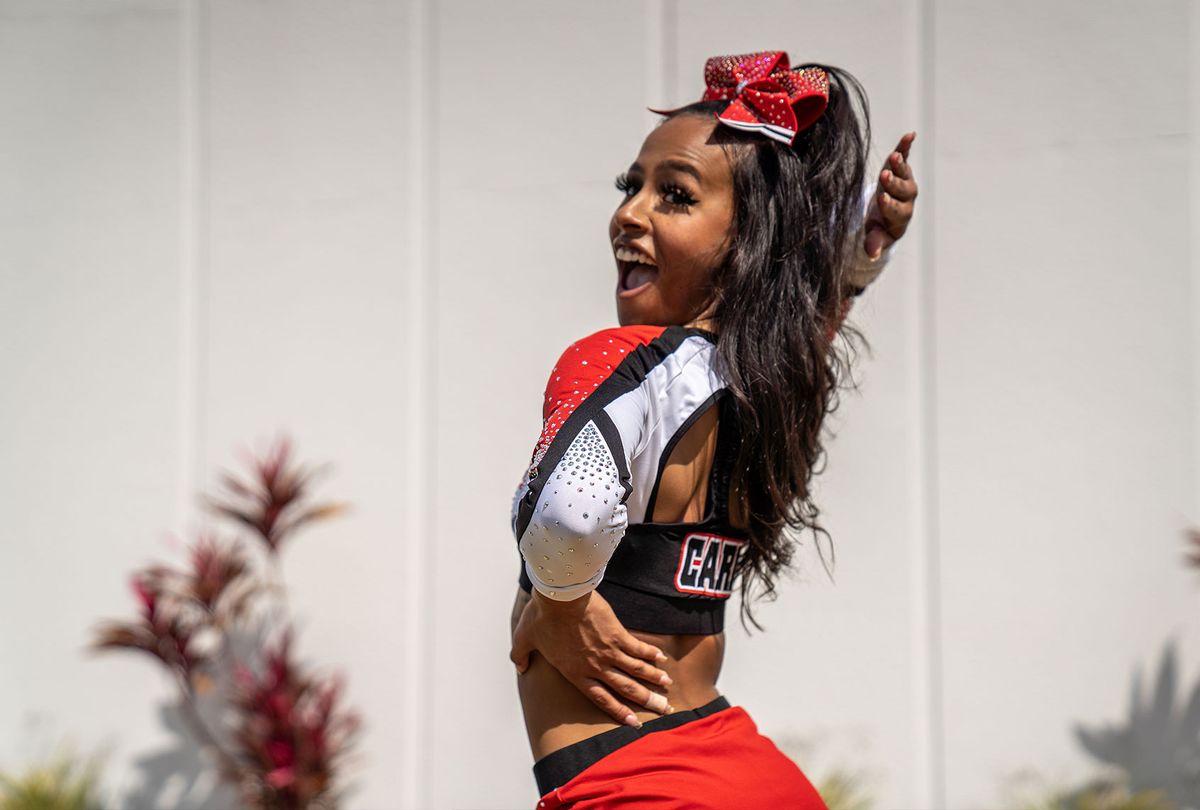 In the second season of "Cheer," Netflix's popular documentary series about the world of competitive college cheerleading, one person out of many emerged as the most compelling, with a story and a competitive edge, the obvious main character in a sea of potential stars.

In its second season, the show widens its focus to include Navarro's rivals, a fellow community college just up the road, Trinity Valley Community College (which originally turned down filming the first season of "Cheer," wanting to focus on their athletics with no distractions). If Navarro is Goliath with its multi-thousand dollar, custom stage and athletes with agents and reality show appearances, Trinity Valley is the underdog with less of everything (money, support, renown) except talent.

Significantly, the Trinity Valley team also has more athletes of color "on mat" (meaning: competing when it counts), especially more women of color. That includes Wooten.

Related: "Cheer" returns and goes full out, even when COVID and a criminal arrest come for the cheerleaders

Wooten is a lead tumbler and flyer on the Trinity Valley team this season. She seems like one of those veritable athletes who can do it all, and do it all well. "She's the Michael Jordan of that team," Greg Whiteley, director of "Cheer," said in an interview with ET.

But Wooten was dropped from planned appearances with Rebel Athletic, a leading athletic gear company, and said she was never invited to be on the "Cheer" Live Tour at all. In an Instagram post, Wooten, who was asked to sign with Rebel Athletic before the second season of "Cheer" aired, said the company had cut her from scheduled appearances at a mall, NCA and Cheersport.

"Their reason for this was my language in the show was bad and I don't fit their brand," Wooten wrote, sharing screenshots of an email exchange with a representative from the company. "She told me 'moms won't want their daughters taking pictures with you.'"

I watched the entire run of "Cheer," and Wooten's language doesn't stand out. She doesn't cuss more than other athletes — or their coaches. It's also important to note: "Cheer" is not a kids' show. After the arrest of first season star Jerry Harris on child pornography charges, the show devotes an entire episode to the subject of child sexual abuse, an episode that was difficult for me to get through. Other regular topics on the show include physical abuse and substance abuse.

It's not for children. "Cheer" is rated MA.

But Wooten is a female athlete of color, and as such, is held to different standards than everyone else. The language is an excuse, as is attributing her passion, drive and success to "attitude," a coded word ascribed to Black women and girls.

As Jennifer Farmer said in an interview with Salon: "Black women have been taught from the time that we were little girls, you cannot be angry. You cannot show emotion. They're going to call you an angry Black woman, so you better be careful how you show up."

And in "Cheer," Wooten shows up incredibly, time and again: sticking her landing, soaring in stunts, pushing through and modeling excellence, both on and off the mat. Despite critics like Rebel Athletic, Wooten is, on the contrary, the best role model on the show.

Wooten is persistent. She fell in 2019, an injury that required serious recovery, both physically and mentally. Like Simone Biles and the "twisties," Wooten dealt with "mental blocks" that interfered with her sport. "It took me three years to fully get back to where I was . . . You can depend on coaches and your family all you want, but they can't do it for you. So, at the end of the day, mentality is the hardest thing to beat," she said in an interview with POPSUGAR.

But Wooten returned to competitive cheerleading and — spoiler alert — led her team to victory in 2021.

Wooten has the follow-through many of the athletes on "Cheer" lack. After competing with and studying at Trinity Valley Community College, Wooten has gone on to Sam Houston State University (so did her teammate DJ Burleson). If one of the goals of a junior college like Trinity Valley or Navarro is to potentially prepare students to enter four year-colleges to obtain Bachelor's degrees, why are many of the Navarro athletes returning year after year? A central plot point on both seasons of the show is whether the athletes are "coming back."

Importantly, as their previous year's season was cut short due to COVID, Wooten is one of the only veterans on a team of rookies in "Cheer." That vaulted her into a position of leadership on the team, a position we watch her grow into in real time, becoming more comfortable with responsibility, and turning into a person the others trust.

Wooten is supportive, not only a good athlete but a good teammate. She calls her team "the most talented team I've ever been on . . . [we've] got kids who can do all of it." But she's also not afraid to admit weaknesses, and to help her teammates if they come to her for advice, which they do. She shows them videos on her phone, coaching them like a coach herself.

Her coach Vontae Johnson calls her a teacher while other coach Khris Franklin says, "You really just need the one person that's going to get to you the right way. And that's Jada," citing her as the reason fellow athletes had a breakthrough. She also keeps teammates on task with college coursework (something other athletes on "Cheer" notably neglect).

"This semester, I feel like a mom," Wooten says on the show. "I think rookies changed a lot about me . . . And I have a soft spot for all the rookies here. All of them. You just gotta try to understand people. And some people need that, like they need people to prove to them that they actually care."

Wooten holds back tears as she pep talks her team. "She's somebody you can look up to," Johnson says on the show. "She's not gonna be the type of leader that you don't see setting a good example."

If you think it's shocking that athletic professionals would vilify someone with obvious athletic talent, scholastic drive and leadership skills, maybe you don't know the reality of Black woman athletes, how they're dehumanized, targeted and dismissed, perpetuating a long history of anti-Blackness. Possibly you missed when Biles was called a "childish national embarrassment" for putting her mental health issues ahead of Olympic acclaim. Or the threats Naomi Osaka has faced, official threats from the organizers of her sport. Or the drug-taking rumors that followed Florence Griffith Joyner her whole life.

Denying Wooten planned media appearances is not only preventing daughters from getting their pictures taken with an athlete of color they can look up to, it's denying Wooten income and future opportunities. As a woman of color, Wooten is already destined to make much less income her whole life.

And competitive cheerleading is not a sport that athletes can do after college. Theirs is an event with no professional counterpoint, no longtime future. They can't go pro. Their season ends in Daytona. While Wooten certainly seems to be planning ahead with her collegiate plans, she deserves to have just as many opportunities, media and otherwise, as white cheerleaders do.

As Gabrielle Union wrote about Wooten: "I see a young woman who seems to be suffering consequences for being a passionate athlete in a way the other girls who expressed themselves, similarly, have not. I see a woman that understands her worth and refuses the constant shape shifting to appease folks who find unapologetic Black women to be inappropriate."

And Wooten wrote herself: "I won't 'clean up my language' to appease them in order to fit in. Because you know what? It never stops there. There will always be one more 'too much.'"