"Cheer" returns and goes full out, even when COVID and a criminal arrest come for the cheerleaders 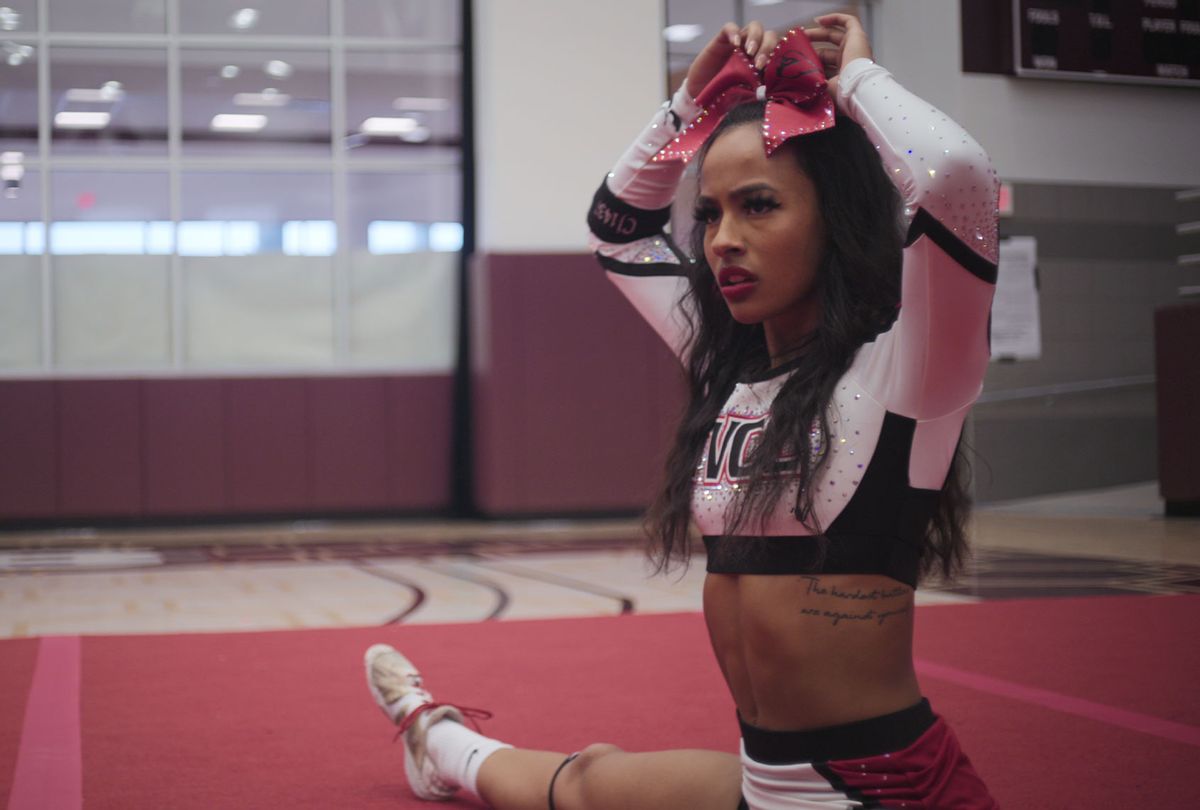 "Give me something to sing about," Buffy Summers (Sarah Michelle Gellar) croons in the infamous "Buffy the Vampire Slayer" musical episode. "Please," she pleads in Auto-Tune. This lyric ran through my head repeatedly during the second season of "Cheer," Netflix's documentary series about the world of competitive college cheerleading. Give them something to cheer about, I thought. Please.

"Cheer" first premiered in January of 2020. Focusing on Navarro College, a community college in small-town central Texas that just so happens to have a 14-time national champion in its competitive cheer team, the Greg Whitely-directed series received an Emmy and international attention. It introduced the world to a misunderstood, intensely challenging and highly skillful sport that involves jumping, stunting and tumbling. Competitive cheerleading is different from the morale-boosting cheers on the sidelines at athletic games. The Navarro team does that too, but they reserve their highest flying, their most dangerous stunts, and their longest tumbling runs for their own matches.

Specifically, Daytona. The Super Bowl of cheer, Daytona Beach hosts the National Cheerleaders Association (NCA) College Nationals, the biggest — and really only — chance for these college athletes to put their skills to the test in a fierce competition that family members struggle to watch on the internet. Most though not all of recent years Navarro has dominated in the category of Advanced Large Co-ed Junior College, bested only by their Texas rivals just up the road, Trinity Valley Community College.

"Cheer" brought the terms "full out" (a run-through performance), "on mat" (being selected to compete) and "mat talk" (pep-talking those who are competing, even if you're not on the mat yourself) into our lives. It also brought coach Monica Aldama, who had the style of Connie Britton as Tami Taylor in "Friday Night Lights" and the command of Rebecca (Hannah Waddingham) from "Ted Lesso," ruling her team with a near-perfect record of wins.

Season 2 of the show catches up with the charismatic break-out stars of the first season, some of whom were already famous before the show in the social media and cheer worlds, including: star Gabi Butler, silver-haired prodigious tumbler Lexi Brumback, compelling La'Darius Marshall with his self-proclaimed "tough exterior" and hurting heart of gold, and Morgan Simianer, whose farm girl to top girl storyline was worth rooting for, as teammate after teammate fell to injury in the first season.

This season also introduces some new athletes, like Maddy Brum, determined to stay top girl/flyer, and flyer Gillian Rupert, who "does not know how good she is." We also see new coaches, like Kailee Peppers, a Navarro alum who steps in as assistant coach, despite being barely older than most of the students, as Aldama flies off to Hollywood to fulfill a dream of being in her favorite show, "Dancing with the Stars."

In a smart narrative shift, Whitely centers a good portion of this season on Navarro's rivals, Trinity Valley Community College. HBO Max's "Station Eleven," with its whiplash flashbacks, could learn from how Whitely deftly weaves the two storylines together. At Trinity Valley, we meet soaring tumbler/flyer Jada Wooten, growing into her role as a team leader; tumbler DeVonte "Dee" Joseph who does spins "the human eye can't recognize" ("Cool knows cool," nonchalant Joseph says about his team); and Angel Rice, a powerhouse tumbler compared to Simone Biles, an athlete a recruit calls "the Madonna of cheerleading."

We also spend time with the coaches at Trinity Valley, Vontae Johnson and Khris Franklin, interesting contrasts to Aldama in demeanors and coaching styles. Johnson does some stunts himself, stepping in to physically show his athletes how it's done.

We watch both teams train. It's hard not to notice that Trinity Valley has more women of color on the team, that they train in an older-looking basketball court (and sometimes, a Baptist church), rather than the athletic center Navarro has access to. Aldama gets Navarro an actual performance stage built, a "band shell" that costs thousands of dollars (thanks, in part, to a $20,00 donation from the "Ellen Show"). Trinity Valley does full-outs in a parking lot.

Navarro flies to their competition in Daytona, Florida. Trinity Valley takes a very long bus ride, and after competing, watches the award ceremony as a team (virtual, due to COVID) in a small, extremely crowded hotel room. Navarro views it in a hotel ballroom.

"Let's have fun on three!" the Trinity athletes say in their huddle. "Take care of your bodies!" they shout to each other.

Trinity Valley is trying something different in 2020. Tired of losing to Navarro, they have brought in a secret weapon in the choreography department, one with which Navarro is intimately familiar. This would have been quite the showdown in Daytona.

It's a showdown that never happens, as it turns out (though they will get their re-match). In many respects this season is two shows: pre-COVID and COVID times, along with the liminal in-between. The cheerleaders eat in a cafeteria, while TV news plays in the background, something that can still be ignored. The athletes don't think this virus will impact their season. We know, of course, it will end it.

What happens when your season doesn't go as planned? Season 2 of "Cheer" is a split show: before COVID came and then after. After is also the winter storm that decimated parts of Texas. After is trying to rebuild athletic programs in the midst of a pandemic where students may be quarantined and lose weeks of practice at any moment. As Trinity Valley Coach Franklin — who dispenses quiet wisdom and who gets his own, emotional "Coach Beard"-style arc — says: "Everything feels like eggshells."

At Navarro, there is no homecoming. There is no cheering on the sidelines at games. Athletes new to the team express frustration that they barely know their coach, Aldama, due to publicity commitments. "It was almost like she forgot where she came from," says Marshall, who butts heads with new coach Peppers.

"It's not the same. It doesn't feel the same," Franklin says.

And neither does the show. "Cheer" is also split with the deep, burning fissure of the arrest of one of the show's regular castmates. This is not a spoiler. The arrest made headlines, and "Cheer" addresses it head-on at the very start of the first episode. There's no mat-talking a way out of this.

Sexual abuse is a topic "Cheer" handles with care and respect, devoting significant time to the survivors, not just the perpetrator. The show makes parallels between abuse in cheerleading and abuse in gymnastics, both sports that put often very young children in unsupervised contact with adults; in cheerleading, adults can even compete on all-star teams with children. But then the show moves on, although the athletes can't forget what their former teammate is alleged to have done, and the show can't, either. Even if "Cheer" doesn't talk about it again, his absence lingers like a long shadow.

"Can we have one normal day in Corsicana?" a Navarro athlete asks, amid Zoom calls and card playing, pet adopting and lonely days of the pandemic on a college campus. It's worth watching to see in real-time the impact of COVID on college athletics, especially junior college athletes whose seasons are already shorter, whose careers end almost as soon as they've begun. "I would like to have some closure and some clarity," Aldama says.

But real life doesn't have closure usually, not in the way we want it to, not in the way we hope. "Cheer" does a good job of existing in that middle space, a space where we don't know what's coming and we haven't recovered from what happened, not yet, maybe not ever.

"Learn when to give up," Marshall says in a scene set in nature. He's fishing, and seems as at home among trees and water as he is flying powerfully across a mat. "Learn to choose you over anything."

"Cheer" is full of such platitudes, one-liners the coaches and athletes say that would look great embroidered on a pillow, painted on a bedroom decor sign — or hand-written on a yellow poster board in a locker room. "Find your 'why,' whatever that may be, and do what you gotta do on this floor," Wooten screams to her teammates in a leader-defining moment.

The athletes of "Cheer" don't just talk it, though. They believe it. They do it. "We've overcome worse odds," Johnson reminds his team. And COVID and all, both teams have their season — and a showdown finish, worthy of any blockbuster sports film.

"That's a hit-and-hope kind of situation," Coach Franklin says. He is speaking about his golf game, college cheer, and maybe our lives. "Hit and hope."

"Cheer" season 2 is now available to stream on Netflix. Watch a trailer for it below, via YouTube: