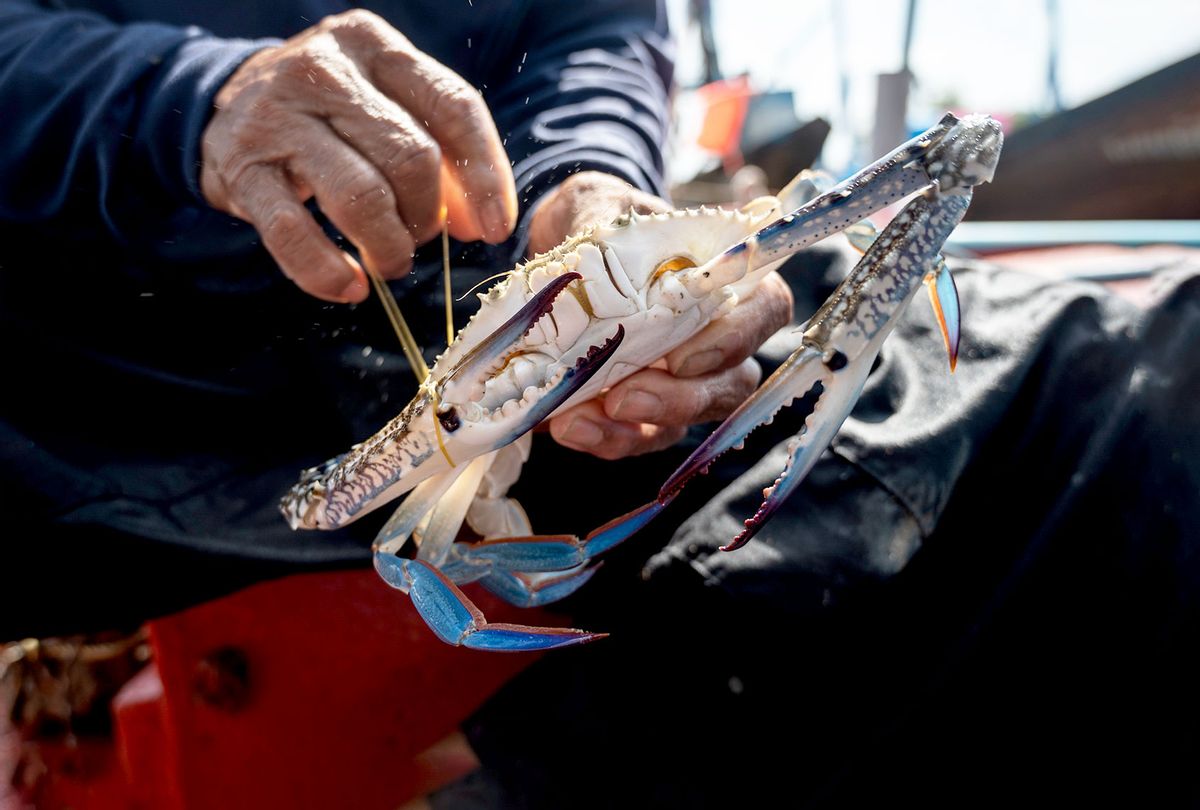 Like many people from the Chesapeake Bay Area, Dr. Marla Valentine loves eating crabs that have pulled from the cold water by local crabbers. Maryland crab is so famous that people travel from all over the world just to eat it. Oprah Winfrey has it shipped directly to her. By any culinary metric worth heeding, there are no acceptable substitutes to authentic crab.

This, as she told Salon, helps make the issue of fish fraud "very personal" for her.

"I buy blue crabs straight off the boat from my local fishermen," Valentine told Salon. "It's a part of the community and the history here. Yet blue swimming crabs from the Philippines are entering the US, and they're being labeled as the more expensive domestic varieties that we get here in the bay and along the Atlantic Coast."

The crustacean chicanery is more than a bait-and-switch on unsuspecting customers: "This can be really devastating to our local fishermen, who are relying on people to buy their high valued product but who may be unknowingly buying this cheaper import that is not actually blue crab," Valentine says.

RELATED: Fish fraud is rampant — and Subway's tuna scandal is just the tip of the iceberg

This is just one of the many findings included in a new report that Valentine co-authored for Oceana, a nonprofit ocean conservation group that has consistently covered fish fraud for over a decade. In their latest study, they describe how the presence of Filipino blue swimming crab masquerading as American varieties drives overfishing and fools unsuspecting crab aficionados. The imported crab tends to cost less than domestic catches, which is why back in 2015 Oceana found that almost half of the Maryland area crabs labeled as coming from local waters actually derived from the Indo-Pacific region.

"Seafood fraud ultimately deceives consumers who fall victim to a bait and switch, disguises conservation and health risks, and hurts honest fishermen and seafood businesses," Beth Lowell, acting vice president for the United States at Oceana, told Salon in a statement. "President Biden can implement seafood traceability—from boat to plate—to ensure that all seafood sold in the U.S. is safe, legally caught and honestly labeled."

The report also details examples of seafood industries flouting the law and furthering damaging the ocean's ecosystems. The problem is what is known as illegal, unreported, and unregulated (IUU) fishing, which increases profits for those in the seafood industry yet tends to be both unsustainable and extremely harmful to the environment. In their report, Oceana discusses how the Caribbean spiny lobster industry in Belize is threatened by illegal fishing; in Mexico's Yucatán peninsula the Maya octopus — which is highly valued by locals in dishes like ceviche — is being fished to the point of overexploitation; and a majority of Peruvian squid fishers lack valid permits, with their catches being offloaded to third-party vessels which then misleadingly label it as having been legally caught. This makes it very difficult to monitor whether long-distance vessels (predominantly from China) are overfishing.

"Depleted squid populations could potentially lead to a decline in other fisheries and disruptions in the marine ecosystem, leading to losses of fishing jobs in local communities," the report pointed out.

To address these and other related issues, Oceana recommends improving methods for documenting every catch and making them traceable from boat to plate, as well as creating mechanisms to protect labor and human rights within the industry.

The issue of fish fraud made headlines last year when a controversial report claimed that Subway, the popular fast food chain, was not using authentic tuna in their tuna sandwiches. Yet fish fraud predates the Subway incident. On an international level, studies released since 2014 have found that Asian catfish, hake and escolar were most likely to be substituted with other types of fish; it also found that, on more than half of the occasions when a different fish was used (58 percent), it came from a species that might get certain consumers sick.

"On Subway specifically, I would say that they are probably better than average, as far as companies of their size," John Hocevar, marine biologist and director of Greenpeace's oceans campaign, told Salon at the time. "There are so many problems with the tuna industry that it is very difficult for companies sourcing as much tuna as Subway to be confident that they know their fish wasn't caught with forced labor, or in ways that are very harmful to our oceans." He explained that the underlying issue is that the industry is insufficiently regulated, making illegal fishing very common. Notably, the fraud is not always due to intentional deceit.

"Your average person would assume that a boat goes out, catches fish, and then comes back into port, sells those fish, and then goes back out, catches more fish," Hocevar explained when discussing the tuna scandal. "Instead, tuna vessels often handover their catch to another boat at sea and just keep fishing."

As offloading to third-parties and other practices make it easy for accidental mix-ups to occur, reform advocates have argued that this process needs stronger oversight. They also call for stronger enforcement against illegal vessels, which heavily fuel the prevalence of mislabeled fish.

More from Salon on seafood: