Proxima d, which orbits the star nearest our Sun, is estimated to be only a quarter of Earth's mass 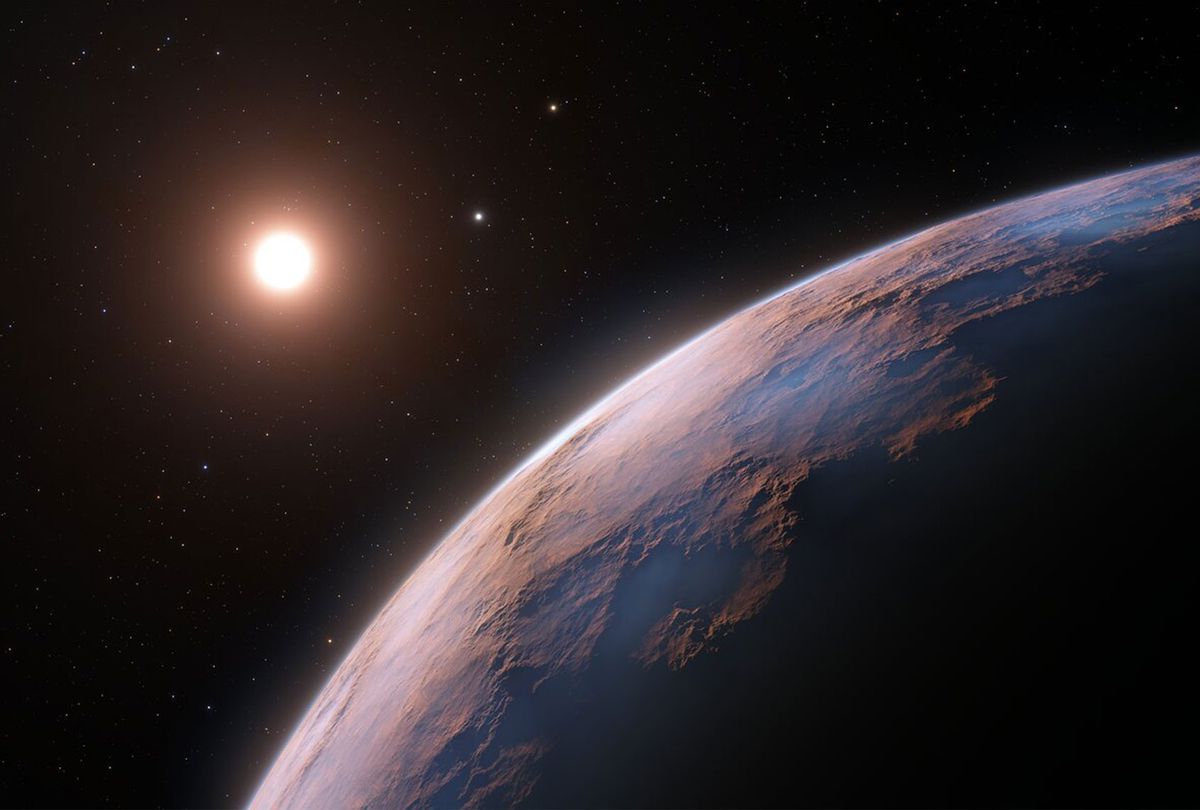 This artist’s impression shows a close-up view of Proxima d, a planet candidate recently found orbiting the red dwarf star Proxima Centauri, the closest star to the Solar System. The planet is believed to be rocky and to have a mass about a quarter that of Earth. Two other planets known to orbit Proxima Centauri are visible in the image too: Proxima b, a planet with about the same mass as Earth that orbits the star every 11 days and is within the habitable zone, and candidate Proxima c, which is on a longer five-year orbit around the star. (ESO/L. Calçada)
--

A new paper published this month reports that the star nearest to our Sun, Proxima Centauri, is a host star to not two, but three exoplanets (meaning planets circling a star that is not our own). The newly-discovered planet has been dubbed Proxima d.

Astronomers have evidence that a third planet is circling the red dwarf star, which is situated 4.2 light-years from our solar system and is therefore the closest star to Earth after our own Sun. The exoplanet candidate is known as Proxima d, and is estimated to be 25 percent as massive as Earth — which would make it more massive than Mars, but less than Venus.

Researchers estimate that the newly-discovered exoplanet orbits Proxima Centauri at less than a tenth of Mercury's distance from the Sun. Because Proxima Centauri is cooler and smaller than our Sun, planets that orbit close to it are not necessarily barren, arid worlds; however, Proxima d is too close to its parent star to fall within the habitable zone, meaning liquid water cannot exist on Proxima d's surface. Astronomers estimate Proxima d orbits its parent star in about five Earth days.

The discovery was made by a team of astronomers who were measuring small shifts in the spectrum of light from Proxima Centauri. At first, the researchers noticed hints of a signal that corresponded to a body with five-day orbit, but the signal was at first too weak to confirm. The team followed up using an instrument called the Echelle Spectrograph for Rocky Exoplanets and Stable Spectroscopic Observations (which has the cute acronym ESPRESSO) at the Very Large Telescope, which is located at the European Southern Observatory in Chile.

The ESPRESSO instrument detects exoplanets using a method known as the radial velocity method. Stars move slightly in response to the orbits of the planets encircling them, in tiny, corresponding ovals to the larger motion of their planets. Generally, these little motions that stars make are barely noticeable, since stars are so much more massive than planets. (This short article shows, visually, how the sun moves as Jupiter orbits around it.)

Those observations using ESPRESSO confirmed that the changes to the parent star's spectrum were due to a planet, and not the star itself acting oddly.

The results were published on February 10, 2022 in the journal Astronomy & Astrophysics.

"After obtaining new observations, we were able to confirm this signal as a new planet candidate," João Faria, a researcher at the Instituto de Astrofísica e Ciências do Espaço, Portugal and lead author of the study, said in a statement. "I was excited by the challenge of detecting such a small signal and, by doing so, discovering an exoplanet so close to Earth."

Proxima Centauri is famously known to host two other tantalizing exoplanets: Proxima b, which is roughly the size of Earth and is located in the star's habitable zone, meaning it is at an orbital distance where liquid water could exist on the planet's surface. Proxima b orbits every 11 Earth days.

The second is Proxima c, which is about seven times Earth's mass. It orbits its parent star every five years, and thus is much further away.

Due to its proximity to us, the Proxima Centauri solar system will likely be one of the first stars that humanity visits once we start sending out interstellar probes.

"The discovery shows that our closest stellar neighbour seems to be packed with interesting new worlds, within reach of further study and future exploration," Faria said.

According to the paper, if Proxima d is only a quarter of the mass of Earth, that would make this exoplanet the lightest one ever discovered — even lighter than a tiny planet recently discovered in the L 98-59 planetary system. That would mean that the effect of Proxima d's gravity is so small that it produces an accompanying motion in its parent star of 40 centimeters per second — tiny compared to the size of stars and the vast distances between us and Proxima Centauri. Researchers made this estimation using the aforementioned radial velocity technique.

"This achievement is extremely important," says Pedro Figueira, ESPRESSO instrument scientist at ESO in Chile. "It shows that the radial velocity technique has the potential to unveil a population of light planets, like our own, that are expected to be the most abundant in our galaxy and that can potentially host life as we know it."

Researchers are hopeful that ESPRESSO and radial velocity techniques will assist astronomers to better identify lighter planets in the future.

"This result clearly shows what ESPRESSO is capable of, and makes me wonder about what it will be able to find in the future," Faria added.