If "Jeen-Yuhs" is in the eye of the beholder, this film doesn't adequately explain Kanye West's 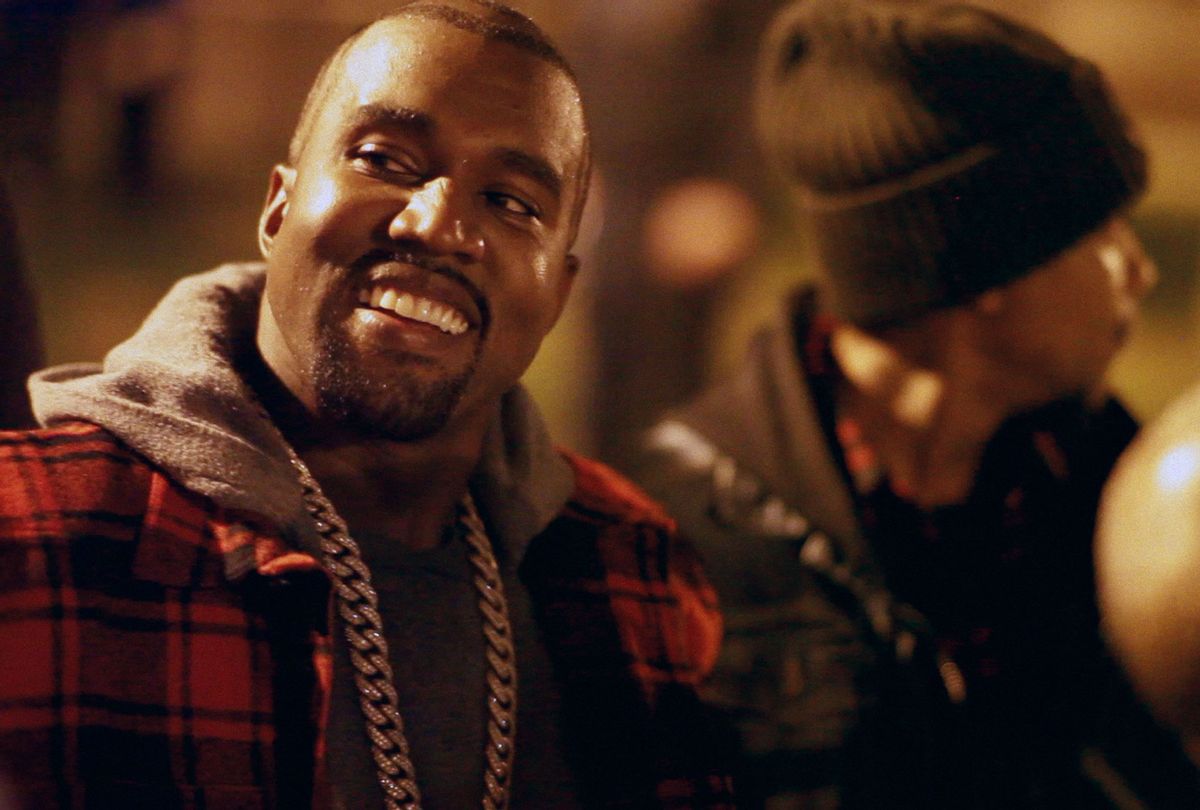 A point arrives in Clarence "Coodie" Simmons' and Chike Ozah's Kanye West documentary "Jeen-Yuhs" when one of the hip-hop legend's confidantes, Rhymefest, poses the question at the project's heart to the man now legally known as Ye.

"Who are you to call yourself a genius?" Rhymefest asks his friend. "It's for other people to look at you and say, 'That man's a genius.'"

By then Simmons has positioned himself as that validating force, the man who's always in the room, cameras rolling, catching every frame of his subject's rise.

Two decades later Simmons and Ozah, who go by Coodie and Chike, have winnowed down hundreds of hours of footage into "Jeen-Yuhs," a biographical triptych whose greatest strength is its thorough chronicling of Ye's career in its nascency – before his 70 Grammy nominations and 22 wins, before he signed with Jay-Z's Roc-A-Fella records.

Before all of that, Ye was a Chicago kid known for his production prowess and doubted as a lyrical technician. Coodie saw something else in him: the potential focus of a hip-hop version of Steve James' "Hoop Dreams." Eventually he sees their relationship as something deeper than that of documentarian and subject. By the end of "Jeen-Yuhs," one can't clearly ascertain how the performer views the filmmaker – or, for that matter, whether Coodie and Chike effectively answer that original question about the nature of Ye's virtuosity.

Rhymefest is right about genius being determined by others and evaluated based upon a number of metrics – natural talent, drive and accomplishment, certainly, but also originality and influence. Ye fulfills all of these expectations and sets new ones for himself, making him one of popular culture's most prominent forces.

But his frequently erratic behavior requires the broader audience to be reminded of this, along with an explanation as to why this is true – apart from the award wins and the financial success of his apparel and sneaker business, Yeezy. Along with his other ventures, his clothing label's partnerships with Adidas and other global brands have made him a billionaire.

Cultural ignoramuses top Forbes' richest people lists all the time. Many, but not all, are driven in a way the average person is not.

Very few have made a lasting impression on American culture.

If "Jeen-Yuhs" took us inside that part of Ye's process even a little that would justify each section's long running time; the shortest of its three parts is a wide yawn at 89 minutes. It assumes, perhaps correctly, that super fans want a full accounting of each time he was turned down by a label. The rest of us may wonder why we're spending so much time staring into this man's mouth during a dental reconstructive procedure.

(At least those who know Ye's career understand why Coodie includes that excursion. It's part of the "Through the Wire" hit single's  origin story, which Ye rapped while his jaw was wired shut following a serious car crash in 2002. Coodie directed that video and included slivers of that office visit footage along with other life snippets revealed in the documentary.)

How a person values "Jeen-Yuhs" also depends on what they expect from a documentary profile like this, which can be as varied as how one defines a "good" documentary.  Do we want to feel like we're part of an artist's entourage, or do we want insight into what makes his art and creativity singular? Do we want to better appreciate his complexity and see him as an extension of the possibility within ourselves, or do we want a more intricate rendering of his C.V.?

The world doesn't lack for worshipful profiles of how a famous person climbed from anonymity to stardom.

Ye is in a rarer category, and the footage seen here proves he's always known that. Billed as "A Kanye Trilogy," Coodie and Chike's work functions best as a tale of relentless hustle, divided into two personalities. This is not a reference to Ye's very public struggle with bipolar disorder, but the examination of the clean split between who he used to be and who he is.

This distinctly occurs in 2006, after he wins his first set of Grammys for "The College Dropout" and starts working on his follow-up "Late Registration." Coodie believed Ye's first Grammy conquest marked the perfect ending to a documentary that could show the world where he came from, but his subject shut him down, explaining he wasn't ready for the world to see the real him. With the world's camera on him, Coodie says, "He told me he was acting now – playing a role."

Here begins the Kanye West most of the world is familiar with – the bombastic artist who calls himself a God, who interrupted Taylor Swift's Video Music Awards acceptance speech for Best Female Video. Who went on TV to call slavery a choice, caped for Donald Trump throughout his presidency and in 2020 mounted a failed and widely derided run for President.

That character is punchline- or a headline-generating menace. Recently targets of his ire have included Billie Eilish and his ex-wife Kim Kardashian's new boyfriend Pete Davidson, who he outright threatened in a now-deleted series of Instagram posts. Last month he was named as a suspect in a criminal battery incident for allegedly punching a fan in Los Angeles.

Owing to Coodie's sympathetic point of view, we do not see much of this side of Kanye beyond clips from entertainment news shows or much of anything expressly Kardashian-related. Not that we need more of that.

Over the first two installments, titled "act i: VISION" and "act ii: PURPOSE," Coodie establishes himself as the mostly unseen narrator invited by the rapper to bear witness to his journey. And if you know Ye's career, these episodes yield a trove of firsts.

We see him hustle his way into the offices of Roc-A-Fella to rap for whomever is present, even office assistants, since nobody believed in his lyrical skills. We watch him chafe against the industry's insistence that he stay in his production lane despite his confidence in himself as a performer.

But the most precious parts of "Jeen-Yuhs" are the moments Coodie captures of Ye in the presence of his mother Donda West, a professor at Chicago State University and the chair of its Department of English, Communications, Media and Theater. Donda's influence on her son is widely known through her many public appearances with him at events and on talk shows such as "Oprah" and "Ellen" before she died suddenly in 2007 due to post-operative complications resulting from a cosmetic procedure.

The documentary evinces this, particularly in the "act iii: AWAKENING" when the narrative jumps from the time shortly after Donda's death to 2014, when Coodie and Chike reunite with Ye and begin filming him again. The change in Ye after his mother's death is tangible although the filmmakers view it from a distance, along with everyone else.

Up close, Ye's zest for creating is matched by his escalating mania, captured in a scene where Ye rants at columnist Dan Barry and real estate mogual Michael Novogratz: ""Have you guys ever been, like, locked up in handcuffs and put into a hospital because your brain was too big for your skull?" he asks. "OK, I have, so . . . next conversation." Coodie, acting out of empathy, cuts the camera soon after that.

Making from-the-heart choices like this to protect his subject's dignity are understandable. Given the access the filmmakers were granted in recent years, other editing choices are more puzzling. 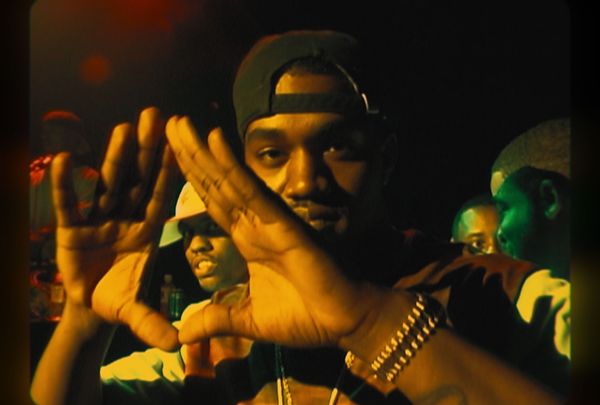 In "Awakening" Coodie marvels at how much Kanye has manifested without exploring how he realized his achievements. He could have recorded insights from other prominent artists with whom Ye has partnered, for example.

One such opportunity presents itself in a trip to Japan for a meeting with famed designer Takashi Murakami. Never does anyone ask Murakami for his insights about Ye. In another Coodie joins his friend at the 2016 launch of his clothing label at Madison Square Garden, an apt time to mention Ye's early connection to the iconic late designer Virgil Abloh.

Instead Coodie only observes, "Kanye used to say he wanted to be the best dressed rapper. Now here he was with his own fashion line." From there he keeps the camera trained on Ye's reaction to the fashion show, instead of showing us much of the show itself. Predictably, the artist is pumped at what he's seeing, leaving us to guess at the visual.

Whether you see this omission as missed opportunity or in line with the filmmakers' fly-on-the-wall approach probably depends on your level of fandom. I submit that it's entirely possible to maintain a documentary's intimate, knowing feel while also providing the audience context that lends weight to the subject's legacy.

Even the execution of the documentary's personal elements are questionable. From the start Coodie establishes himself as the narrator of Ye's story, but doesn't satisfactorily flesh out his own arc. Instead, the videos of his personal life appear when Ye disappears, which occurs far enough into the piece to make it seem like filler.

Mind you, these are vital life moments, including the birth of his child and the last scenes of his father before he passes. But we've spent so much time investing in Ye's journey and so little with Coodie beyond his hosting shout-outs for "Channel Zero" as to confuse us as to the purpose these scenes serve in the larger films, other than padding. This places its usefulness on par with the frenetic montage of entertainment news headlines about Ye that bridge chasms in the timeline when the filmmaker wasn't part of his subject's inner circle.

In a few recent interviews the filmmakers stress that this is not the definitive biography of Kanye West,  a declaration mainly made in response to another social media post in which Ye demanded final cut. (His request was denied.) This also establishes "Jeen-Yuhs" is only partly authorized, which could have lent weight to whatever broader observations the filmmakers might have made about their subject.

Instead it relies on Coodie's prescience about his subject's potential, illustrated in such scenes when a pre-fame Ye explains to those who will listen, "I'm trying to get to the point where I can drop my last name off my name, get to the point where people can look back and say, 'Man, dude remember dude used to just make beats for people?'"

He has arrived. The frustrating part is that "Jeen-Yuhs" never sufficiently illuminates the path that led us here.

Act i of "Jeen-Yuhs: A Kanye Trilogy" is streaming on Netflix, with subsequent installments debuting on Wednesdays. Watch a trailer for it below, via YouTube.