Director on the appeal of "The Automat," which was "the coolest cafeteria of them all" 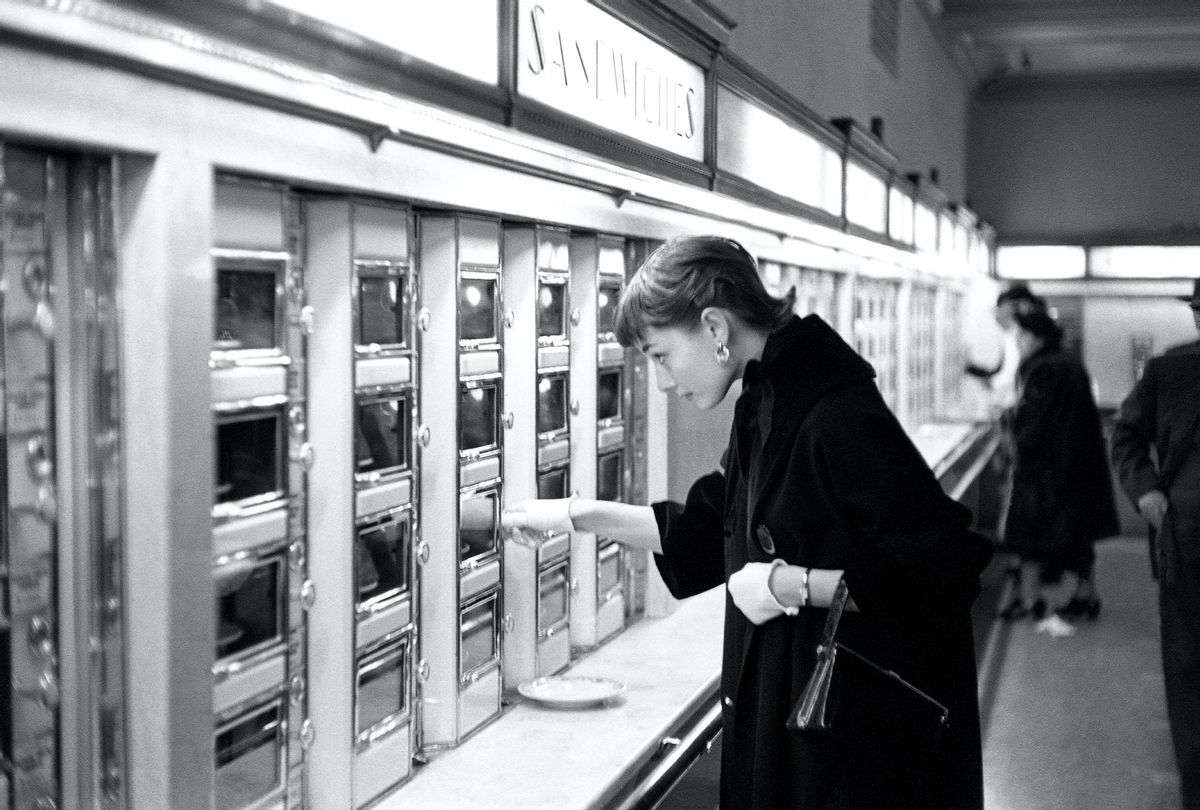 The author works for Temple University Library, which is also the employer of John Pettit, an archivist in a separate department mentioned in the article.

Anyone — and perhaps everyone — who remembers the Automat remembers it with affection. Lisa Hurwitz's charming documentary, "The Automat," exudes nostalgia for Horn & Hardart's remarkable restaurant chain that has customers put nickels in slots to secure everything from fresh sandwiches and entrees like Salisbury steak, to cakes and pies, and coffee (which spouted — with milk! — out of fabulous bronze dolphin heads). The restaurants only existed in New York and Philadelphia, and they were favored by the likes of Mel Brooks and Carl Reiner, Colin Powell, Ruth Bader Ginsburg, Elliot Gould, and even Howard Schultz, who modeled Starbucks on the Automat's presentation of "theater and romance."

Hurwitz's film shows that the Automat's success was based not only on the efforts and principles of its owners, Joseph Horn and Frank Hardart, but also their commitment to provide good quality food at cheap prices. For decades, everything cost a nickel! (And the business took a nosedive on November 29, 1950, when the price of a cup of coffee doubled). Moreover, the Automat was a democratic place where immigrants who did not know English could eat, as could women who were entering the workforce in large numbers. Swell couples could easily share a table with a houseless person, and the fabulous cafeterias were always integrated. The Automat was an equalizer that was able to feed anyone and everyone because it benefitted from economies of scale.

RELATED: New York's dying signs: what we lose when corporate logos take over

Hurwitz spoke with Salon about the emotional attachment so many folks have for this bygone experience and her film.

It's an obvious question, perhaps, but as someone from Philadelphia who has incredible nostalgia for the Automat — despite having never been to one! — what do you recall about going to the Automat? Or like me, have you never been?

I've never been! The last one closed the year after I was born. I am from Los Angeles, but I live in New York now. I learned about the Automat in 2011 or so. I found out about it in my college library, just reading. I was very interested in cafeterias, so I was trying to understand the history of cafeterias in America and that's when I came across Horn & Hardart.

Let me ask you the questions you asked Alec Shuldiner, the automat historian, in the film. How and why did you get involved with this project?

A film wasn't my initial intention. It was a curiosity that kept growing. At first, it was a short, profile on Steve Stollman, the automat collector — that barn in the film is his — then the focus kept changing. I had this short that I had done for my class, and I felt there was something there and I could keep going with it.

Why did this topic appeal to you to make a film about it?

The initial appeal was that, to me, Automats were the coolest cafeteria of them all. I loved my school cafeteria and ate there constantly and had wonderful experiences — not just with the food. Growing up, I ate on my own a lot, and a cafeteria was a place I could eat with others and the food always changed, so there was this security and the food was hot. I made friends there; it was a welcoming space, and I would hang out there a lot.

When I came across the Automat, it was this really cool concept. When I saw it was prominent in pop culture, I realized it was a big deal. People from all over the country would go to New York, and what was on their hit list? To see the Automat. I started meeting the Horns, the Hardarts, and some key executives. I didn't know what I was doing, but I thought I should figure out how to make a movie because this is too good, and this story is preserved so well.

What can you say about the research you did for the film? There are some fabulous images.

I knew about the New York Public Library's archives, which were massive and very rich. But I didn't know about Temple University's Urban Archives. The story was preserved very well, and no one had done anything with it, which to me, seemed crazy. Temple [archivist] John Pettit was always unearthing more and more footage — their Urban Archives has the best collection of automat footage. Places like Getty have drive-bys and generic stuff. But Temple has the local TV station archives and John [Pettit] wants to make it accessible; he wants the content to get out there. He was digging to find everything he could. Temple has its own thank you in the credits.

What can you say about assembling all of the material into a lively 80-minute film?

We were trying to not only tell the story of the Automat but also give some social commentary and wishes for the future. The moral of the story here and my nostalgia for the Automat was about this time where people were rubbing elbows and they liked that. They were sharing tables. A business was providing them with a beautiful space with really good, affordable food. It was a beautiful time and a different world. I'm someone who is very idealistic, so it was very important to me that my editors infused the Horn and Hardart story with idealism — that is the way the world should be, and how we should all take care of each other. I credit my editors. It's subtle in the film. You don't watch it and feel the film is politicized, or that we are shoving something down your throat, but it is there — this proposition for the way of the past. We are carrying it with us; it lives on with those who went there or heard about it from their relatives.

You also get some wonderful stories from famous people who adore the Automat. Why do you think folks have such affection and emotional attachment to this particular restaurant chain?

It was really that wonderful of a place, and it was representative of a much simpler time. It was like a second home for so many people that it played an important role in their lives. It was a place you would go with their relatives. People who are around today, their relatives took them there. We interviewed older folks who went there throughout their lives. It was a family-oriented place and that plays a key role why they have such nostalgia for it — they associate it with loved ones who are gone. But they also have nostalgia for it because the food was so awesome.

The film chronicles the success of the Automat — it filled a real need during the Depression and for different social groups and yet remained good, cheap, and democratic. The economies of scale bolstered its success. What observations do you have about the popularity of the Automat? Because it fell out of favor for almost the very reasons it succeeded.

Something that is maybe an unpopular opinion of mine about patronizing large businesses and maybe the beauty in large businesses is the scale that they are able to operate at and then offer something high quality at a lower price. I think that when we all put into the same pot, we are all able to get something great back; it is the way to make things affordable. Today, we have too many options. If we had fewer options, we could have more high quality options. That's also my opinion about health care. Once Horn & Hardart didn't have the volume of people to serve, the quality went down, and the system couldn't sustain itself. It was not a flexible system. It was created to be in bulk and they could not gracefully scale it back. It's an important business lesson – you have to make it scalable. If they had, maybe they would still be with us.

Horn & Hardart was operating in a time when society had different ideas about making things to last and quality. For a company to be really rich, it would make sense to me to become less rich and raise the quality and have pride in what you are serving. Values in business have really shifted a lot since the time of the Automat. They served very high quality at affordable prices.

One of the more touching anecdotes in the film was adman Ron Barrett's campaigns to help bolster the Automat during its decline. Do you think it could have been saved/sustained?

I'd like to think that things could have [changed] but they needed to take drastic action — much more than an ad campaign. I'm not a scholar of business, but if it could have survived, it would not have looked like what it did in the beginning. What you had in the beginning were these expensive to operate commissaries that were giant, occupying valuable real estate in New York City. An ad campaign was not enough. They were trying, but the thing that was working the best for them was converting and franchising Burger King and Arby's. That was the moneymaker, but they had debts in so many areas they had to sell those franchises back to Burger King and Arby's.

The people in Philadelphia who purchased the Horn & Hardart brand name tried many times to revive the Horn and Hardart name, and after 1991 they opened Horn & Hardart cafes in Pennsylvania and tried to bring back the coffee, selling bags of it, but customers who tried what they had said it wasn't the same coffee, so the family realized that you can't compete with people's memories. People forgot about the Automat eventually. They loved them from childhood, but stopped going there, or moved to the west coast and then you realize later you really miss it. Businesses change all the time. They would have had to change substantially.

If you were to work in the Automat, what job would you want? Nickel changer?

Oh, wow! I'm so flattered that you think I would be good enough to be able reach in and just know 20 nickels. I don't understand how people did that, but people don't understand how you can make a film, but you just figure it out! Thank you. I'll be a nickel thrower. I'd like to think that I could have been that pioneering female executive in that all-male executive team breaking barriers in that office. Or maybe I would have been behind the steam table giving customers dollops of carrots and carving their turkey.

"The Automat" opens Friday, Feb. 18 in New York before it expands in theaters. It will be available on digital in June.