The GOP espouses "family values," but the anti-vaccine campaign is hurting kids and tearing families apart 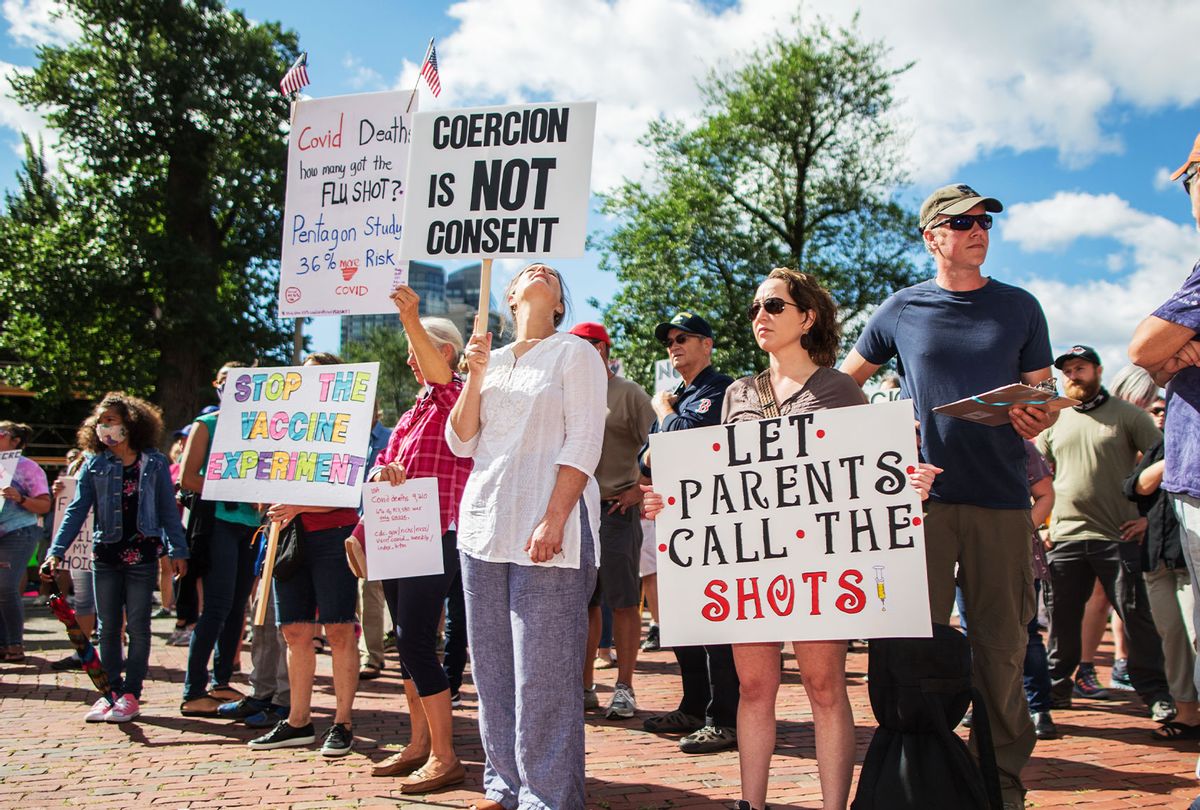 Republican media and politicians adopted an anti-vaccine message for one obvious purpose: To sabotage Joe Biden's presidency by prolonging the pandemic. In this, they've been wildly successful. Despite the dramatic decline in cases in recent weeks, as the omicron wave burns itself out, there are still over 2,000 deaths a day from Covid-19, the vast majority the result of vaccine refusal. The public's grief and weariness has definitely helped drived down Biden's approval ratings, but at immense cost to Republican voters. Despite blue areas being denser than red, the death rate in Donald Trump-voting counties soared above Biden-voting counties, in a way that can only be described as "exponential."

It can be hard to care, however. If a bunch of right-wingers want to die for the "let's go Brandon" cause at the behest of sadistic and vaccinated Fox News hosts, at a certain point the attitude of much of blue America is "have at it!" (And maybe, as Trump seems to fear, killing thousands of their own a week will backfire by reducing their voter margins in some tight races.) But there is one group of innocents that are suffering because of get-Covid-to-hurt-Biden campaign: Children.

Anti-vaccination ideology is a form of child abuse.

Children may be relatively safe from severe illness or death, but what they are not safe from is having parents who care more about pleasing their Fox News masters than protecting their families. Unlike case rates and death rates, the amount of emotional pain that right-wingers are inflicting on children in their anti-vaccination mania may be immeasurable. Take a gander at some of the hair-curling stories that have come out recently showing how much damage anti-vaxxers are doing to the mental and emotional health of their children.

In Ohio, pediatrician Dr. Thomas Nguyen went viral on Twitter with a heart-breaking story of a teenage patient whose mother died of Covid. The boy's mother was arrested after he got into a heated fight with her that led to his sister calling the police. In jail, she's believed to have caught the virus, and she died — all because, even though her son had been vaccinated, she had refused. Her death was obviously her own fault and not that of her minor child, and yet, Dr. Nguyen reported, "Family blames him and he of course blames himself."

On Wednesday, NPR published the story of 16-year-old Nicolas Montero, whose Republican parents are so miserable to be around that he "runs track, works night and weekend shifts at Burger King" all to "stay out of the house." Naturally, they refused to let him get vaccinated. "It's like one thing they see on Facebook, and then they completely believe it," he lamented. So he got on a bus to Philadelphia and did it himself, once again showing that high schoolers have more emotional maturity than your typical Trump voter.

Of course, the Canadian trucker blockade has their own hair-curling story of cruelty to children. One of the far-right truckers that Fortune spoke to was Jake Klassen, 39, whose daughter is receiving palliative care at a center in Winnipeg. Klassen and his wife have abandoned their 9-year-old, because — according to them— the care residence has a vaccine mandate, and these two would rather be unvaccinated than visit their sick daughter. (Update: The care residence denies that they refuse all visitation for unvaccinated relatives, which makes this excuse for ditching their daughter even more suspect.)

"This is something worth fighting for," this pathetic child-abandoner told Fortune.

RELATED: Meet the spouses whose marriages were destroyed by QAnon

The Washington Post printed a story Monday about Chris and Diana Crouch, a Republican couple in Kingwood, Texas, whose family was devastated by vaccine refusal.  By Chris's own admission, he and his wife refused vaccines because of "politics." The result was that the pregnant Diana — already the mother of two and stepmother to two more — nearly died. Thankfully, both Diana and her prematurely born son lived.

Chris Crouch appears to be one of the few anti-vaccine Republicans who is feeling real regret over his choices, saying, "When you sit there and you see your wife on life support because of Covid, you throw out politics." He even got vaccinated.  But, as many of these stories demonstrate, far too many conservatives prioritize "sticking it to the liberals" over the health and wellbeing of their own children.

Sadly, none of this should be a surprise. Republicans love to talk up how they're "pro-life" and believe in "family values," but a closer look at how right-wing ideology operates shows the opposite.

All too often, children aren't regarded as vulnerable people who deserve care and protection, but more like property to be disposed of as the parents see fit. The examples are endless. Due to Republican obstruction, the U.S. is the only United Nations member state not to ratify the Convention on the Rights of Child — mainly because Republicans fear it will interfere with the "right" to beat children and force religious ideology on them. Conservatives also continue to fight to deny trans children their right to be treated with basic decency, to force children into "pray the gay away" abuse farms, and compel pregnant minors to give birth against their will.

The recent hysterics that Republicans are sowing in school boards across the country is another example. Conservatives say they want to ban mask mandates and "critical race theory" in order to "protect" the children. But even a cursory examination shows the opposite is true. They are using children as pawns in their gross political games. And while it's reasonable to debate the wisdom of mask mandates in schools now that school-age children can be vaccinated, the anti-mask agenda was raging well before kids could get the shots, rendering them vulnerable to the virus and the potentially serious side effects of encountering it with no prior immunity.

As for "critical race theory," well, that's just a hoax that was propped up as a cover story to deny children basic education. Once again, Republicans are trying to deprive children of a fundamental right. Worse, they're not only trying to undermine the quality of education. Many right-wing activists want to destroy public education altogether, believing the parent's right to control their child, to treat them like property instead of people, is absolute.

It may be shocking to see how many people are depriving children of medical care, abandoning children, and leaving them orphans — all for the asinine purpose of trying to undermine Biden's approval numbers. Perhaps it shouldn't be. That's simply a logical extension of a conservative ideology that treats children as objects to be controlled, not full people in their own right.