Like abuela, we all thought we would be different people than who we are now 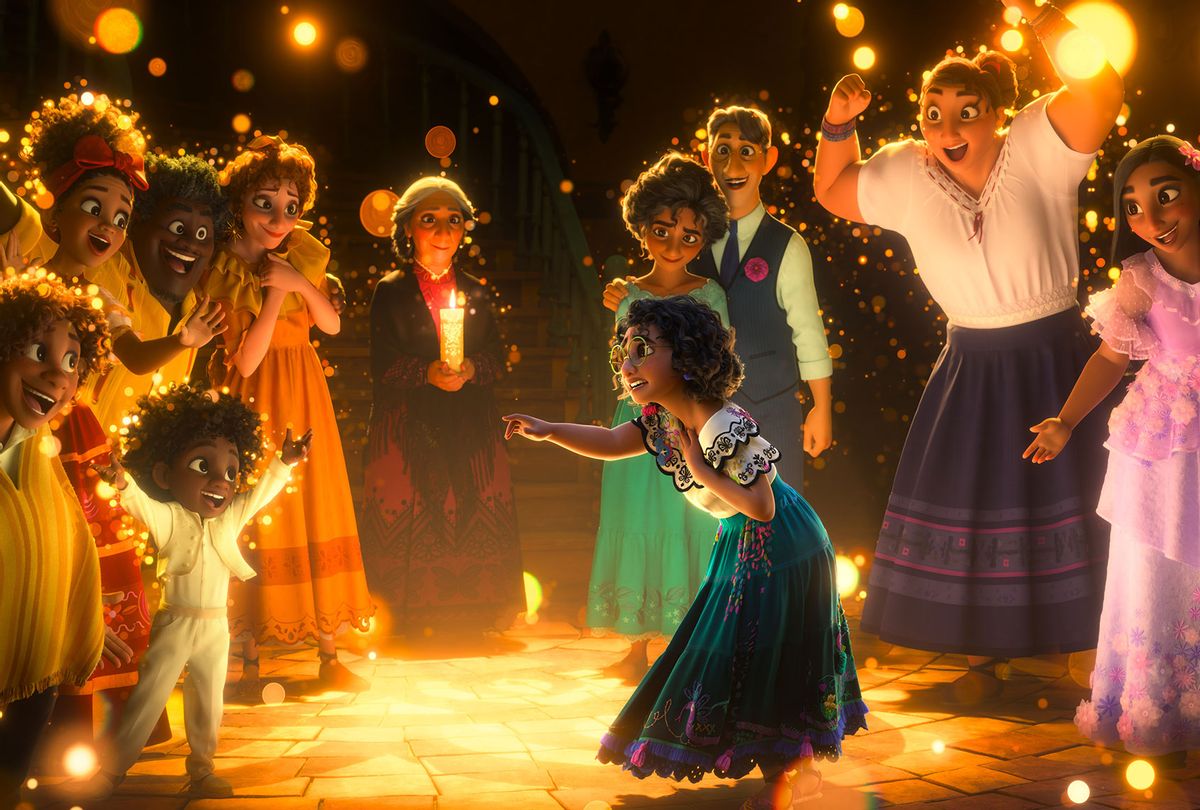 The following contains spoilers, as much as there can be, for "Encanto." If you haven't watched it yet, what are you waiting for?

Forget Bruno. "Dos Oruguitas," recently nominated for an Oscar, is the "Encanto" song we need the most right now.

It is a song of farewell for the things that can never be again — and a hymn of hope that beauty will emerge in the newly broken world, anyway. What better anthem is there for these years of our pandemic metamorphoses?

The folkloric ballad about two caterpillars accompanies the film's apocalypse, in the original meaning of the term: the unveiling of a family's deepest trauma. The film's heroine Mirabel and her abuela, Alma Madrigal, sit by the place where Alma once forded a river with her babies in her arms — then lost her husband as he bravely stood against the armed men pursuing them, and was cut down by their swords.

To the strains of the song, Mirabel sees the full story unfolding. She witnesses Alma's love for Abuelo Pedro blossom and grow. She sees the flames in their village and the wail of Alma's grief when he dies. The encanto – the miracle or gift of magic that runs in the family – came at a terrible price.

Until that moment, Alma never told anyone about the depth of the pain. She spoke only of the miracle that came afterwards.

Since 2020, the COVID-19 pandemic has left much of the globe physically and mentally traumatized. It's not the first, nor will it be the last, collective trauma of this century. What we do with that trauma is what matters now.  In the words of the song's English version, which plays over the end credits: "What happens after the rearranging?"

The caterpillars live in a world "que cambia y sigue cambiando"— that changes and keeps changing.  Last week, after the song's Oscar nomination, composer Lin-Manuel Miranda told the New York Times that to write it, he drew on "moments in your life when you were so scared of change, and you just have to trust that there's a reason it's happening."

Not everything happens for a reason. I think, though, that Miranda is talking more about the omnipresence of change, and our need to interpret that change, than he is about theodicy. Whatever our personal theology, the second law of thermodynamics is coming for all of us, someday. To stardust we will all return. The question, to paraphrase J.R.R. Tolkien, is: what do we do with the changes we are given?

"Dos Oruguitas" gives us a new way to interpret what the pandemic has wrought. The inside of a chrysalis is messy. Caterpillars release digestive enzymes that tear apart their larval existence. In other words, after eating everything in sight, caterpillars ultimately digest themselves. We can't see inside the cocoon until the transformation is almost complete. To get there requires a hidden unmaking.

It's been messy inside of our human cocoons these last two years. The first time I watched "Encanto," I thought, man, the lockdowns would have been much easier if I lived in the Madrigals' capacious, sentient Casita. Instead, most of our houses — if we were lucky and they were safe from abuse, hunger, tornadoes — were a site of not-so-enchanted chaos. We spilled things. Our pets vomited on the carpet. A cacophony of Zoom noise or Netflix flowed forth from every corner.

It was also messy emotionally. Our affective enzymes tried to digest the existential distress prompted by the seeming omnipresence of death. We had to face the parts of ourselves and our relationships that we had been able to brush away by escaping — to the store, to work, to Disney World — when physical escape was no longer a viable option.

We all thought we would be different people than who we are now.

The globe is still in that reckoning. There will never be a total return to "before," even as mask mandates fall and cases plummet. There are other times we have tip-toed back out into the world before only to grab our KN95s when another wave hits. Our sense of our porous bodies in space has been altered forever.

"Rompiendo crisálidas!" the song commands us. Break out of your chrysalis!

What happens to the butterflies after their escape? Christian theology focuses on the miracle of their emergence — a symbol of resurrection. In recent Jewish history, the poem "The Butterfly," written by Pavel Friedman in the Theresienstadt concentration camp, has led many people to associate butterflies with the children who were murdered in the Holocaust. The "butterfly effect" is a popularized way of talking about chaos theory.

Those are three very different notions — but they all evince a lack of personal control. Whether it's hope for life renewed, mourning for lives lost, or the sense that all lives are intricately interwoven, those three faces of the butterfly all remind us no one is alone.

Butterflies don't fly for long. They live for just a few weeks. This is one of many reasons why "Dos Oruguitas" had to begin as a lullaby. Lullabies are the songs that brush us closest to death. They are born of love drenched in the fear of loss. It is what my daughter means when she grabs me tight and asks for an extra hug at bedtime. Sometimes she says the fear out loud. "What about our ancestors who were gone so long ago that no one remembers them?" she asked one night.

Alma's farewell to Pedro at the river's edge is a wrenching one. Yet we are always saying farewell to the people we love the most, a little bit more every moment, until the final separation. "Encanto" shows us how to live with that fear, and what comes after.

When the pandemic began, we wondered what kind of art it would give us. The Disney animators and Lin-Manuel Miranda — who writes grandmas like no one else writes grandmas — gifted us with the image of a grandmother and  granddaughter hugging amid swirls of butterflies.

"Encanto" took us inside: inside our casitas, our families, our cocoons. Maybe it will help us integrate the trauma of the last two years as we learn to live with all the things that can go wrong inside of our bodies — and inside of our body politic.

"Encanto" – which has received Academy Award nominations for best animated feature, score and song (for "Dos Oruguitas") – is streaming on Disney+.

Jodi Eichler-Levine is a professor of Religion Studies and serves as the Berman Professor of Jewish Civilization at Lehigh University.