The problem with the populists "free thinkers" — they are just lazy 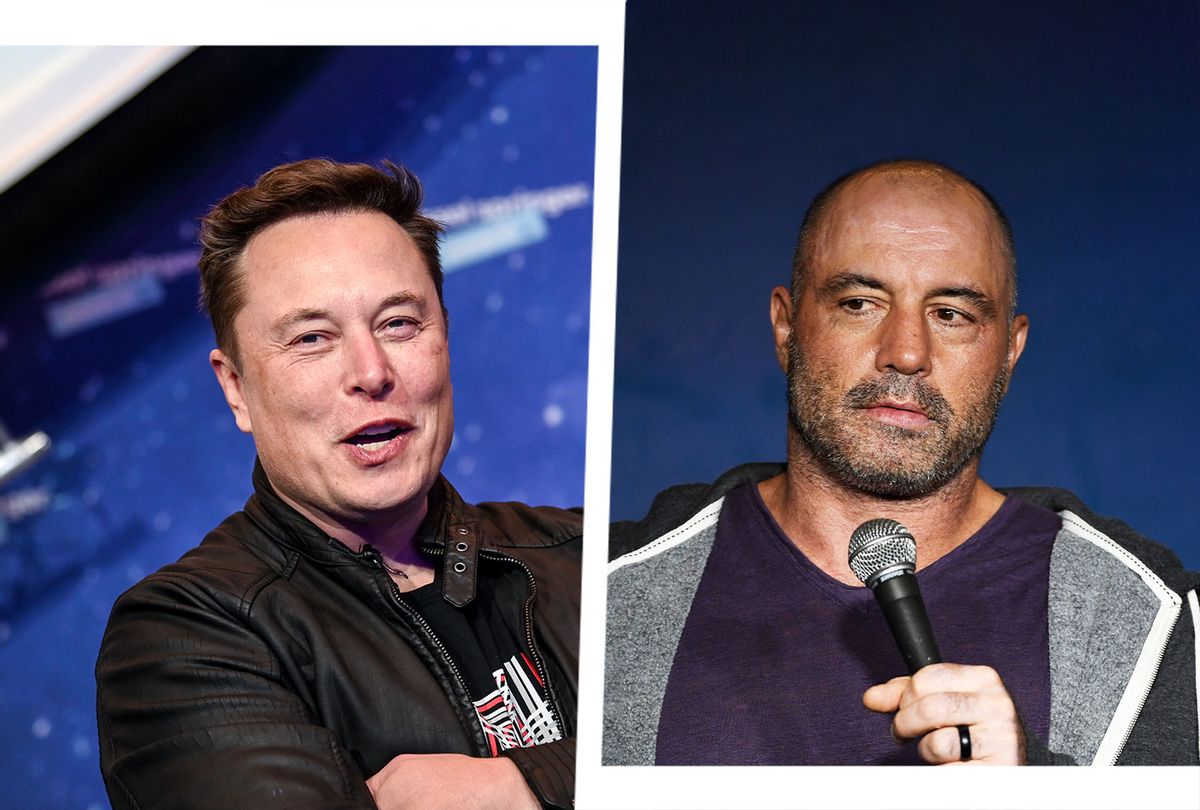 There are few things so terrible that a white man can do that the media won't still find a way to romanticize him. Even Ted Bundy and David Koresh got the Hollywood treatment that portrays them as glamorous and sexy. In an environment where even murderous sexual predators get romanticized, I suppose it's no surprise that the standard-issue American dirtbag is getting a media glow-up, reframed as daring rebels because they stand up for the millennia-long tradition of letting men skate by with the bare minimum of effort. And yet, it's still annoying.

"Populist flamethrowers rock media," blares a headline at Axios. The text describes "Joe Rogan, Elon Musk, Barstool Sports founder Dave Portnoy," as well as Substack writer Bari Weiss and comedian Dave Chappelle as people who "brand themselves 'free thinkers' untethered to political dogma." The piece goes on to quote Saagar Enjeti, a supposedly "anti-establishment" YouTuber: "They explicitly say: 'Screw you.' ... I would say that is the heart of a lot of their appeal." Weiss, in a particularly goofy bit of self-congratulation, describes herself as committed "Wrongthink," even though her newsletter is largely dedicated to conservative nostalgia for the days when one's dumbest prejudices could be expressed without discomfort.

RELATED: Why Joe Rogan's vaccine misinformation is so dangerous — and dangerously appealing to his audience

Even in our bullshit-heavy era, this Axios article is truly off the charts. Repeated self-assertions of rebellion from these figures does not change the basic fact that they are, in reality, the opposite of freethinkers, rebels, or any of the other self-aggrandizing terms they may apply to themselves. On the contrary, the appeal of Rogan, Weiss, Musk, and others to their fanboy base is simple: They are selling validation to a lazy, incurious men who fear change. They are soothing figures, stroking the heads of their D student audiences, telling them that they are in the right to react to any intellectual challenge or threat of social change with a childish tantrum. My god, Weiss wants to start a fake university, so tender-minded conservatives can get an "education" without ever having to grapple with an uncomfortable idea. Not exactly a profile in courage, there.

Sadly, it's not just Axios who insists on recasting whiny reactionaries are rebels, and the people they hate — feminists, anti-racists, LGBTQ activists who are the real rebels advocating for real change — as the "establishment." As the article notes, Atlantic writer Derek Thompson fell into the trap of labeling these figures the "DGAF Populists." Which....no. These folks very much do give a f*ck, especially when their unearned status or privilege is challenged, or they are asked to actually learn a thing or two about an issue before opining at length about it.

The laundry list of recent or ongoing controversies these folks kick up demonstrates how much a big ol' whiny f*ck they give if the "right" of crappy white men to impose their ignorance on others is challenged in any way. Musk, for instance, recently drew criticism when he tweeted a comparison of Canadian Prime Minister Justin Trudeau to Adolph Hitler, because of the measures Trudeau took to stop the far-right blockade of Ottawa. The blockaders were making life hell in the city, constantly honking horns and harassing residents, all in an effort to force their fringe, authoritarian views — as well as to demand the "right" to spread COVID-19 by refusing vaccination — on an unwilling public. By siding with the blockaders, Musk was siding with the view that a fanatical right-wing minority should be able to rule by fiat on everyone else — not exactly the view of a DGAF person who believes in freedom and democracy and doing your own thing.

RELATED: Bari Weiss' field of right-wing dreams: Will the "University of Austin" ever actually exist?

With Chapelle, the situation is equally dark, as he's built his resurgent career on being an obsessive jerk about trans people, doing an entire Netflix special built around his outrage that anyone dare challenge his reactionary attitudes about the issue. The ensuing fallout led to a trans worker at Netflix getting fired for objecting to the anti-trans orthodoxy and Chappelle getting a bunch of new specials, where he and his snowflake-delicate new fans can wallow in their shared anger at having their hidebound ideas about gender and biology contested.

As for Rogan, the two biggest controversies of late involve behavior that would have read as outdated and reactionary a century ago, much less today. First, there's the racism. Rogan bizarrely ranted on a recent episode about someone "100% African from the darkest place where they're not wearing any clothes all day," which is a stereotype that even white people in the early 20th century clocked as over-the-top racism. He also was recently exposed as a frequent dropper of a certain racial slur, as well.

Then there's the anti-science crap, which is so bizarrely reactionary that it's reminiscent of the medieval church's reaction to Galileo saying the Earth revolves around the sun. Rogan and his guest Jordan Peterson — another whiny reactionary who largely focuses on throwing tantrums over challenges to patriarchal authority and threatens to sue feminists who question him — recently unleashed a bunch of complaints about the science of climate change that really would have felt comfy to a 16th century priest defending heliocentrism. And, of course, there's Rogan's ongoing campaign against the Covid-19 vaccination, which is rooted in a fear of scientific advancement that's so out of control that one would not be surprised to next hear him come out against germ theory.

There's, of course, a strong thread linking the priests who locked up Galileo, the 19th century doctors who rejected germ theory, and Rogan's weird paranoia about vaccine technology. All are rooted in a desire for the simplicity of patriarchal authority, where "truth" is whatever rich men in charge want it to be, and the mind is unbothered by troubling questions about evidence, research, and the discomfort of having to abandon prior assumptions in the face of new facts.

Despite the surface claims to be somehow non-partisan, the actual arguments of the Rogan/Weiss/Peterson world are, in actuality, no different than what's coming out of the openly right-wing world of Fox News. Just Tuesday, Tucker Carlson was making a defense of Russian President Vladimir Putin — a man who literally has journalists murdered — on, uh, "free speech" grounds.

Tucker: It may be worth asking yourself… why do I hate Putin.. Has Putin ever called me a racist? Has he threatened to get me fired for disagreeing with him? pic.twitter.com/0jlXfS0PYy

Carlson's desires aren't mysterious. He wants a world where one can be racist without being confronted or challenged, where white nationalist and misogynist ideas aren't questioned. And he sides with dictators who will literally use violence to silence dissent. But when knee-jerk reactionaries are recast as "rebels" and fear of robust discourse is rewritten as "free speech," is it any wonder that Carlson feels he can get away with this kind of doublespeak that paint his censorious, authoritarian urges as "freedom"?

But there's also just old-fashioned laziness and entitlement. Thinking is hard. Learning is even harder. Dealing with new ideas — from the socially constructed nature of gender to the scientific theory of mRNA vaccines — requires work. A lot of that work can be genuinely uncomfortable, especially if it also requires confronting your own prejudices. Picking up a feminist text or reading the history of how the vaccine was developed means giving your brain lots of exercise, some which can be disagreeable as previous assumptions get questioned and cognitive dissonance is suffered. Easier to tune into Rogan's show or read Weiss's newsletter, wrapping one's self in the comfy blanket of never having to the mental work of contending with novel ideas.

Axios marvels at how much money these faux-populists make peddling intellectual lethargy to their audiences, but they shouldn't be. Pandering to laziness has always been profitable in a capitalist society. It's not a surprise that so many of these folks also market supplements or fad diets, such as Peterson's "meat only" nonsense. Such products rely on the wish to have a fit body without the bother of exercise and a balanced diet. Rogan, Weiss, and others are playing the same game, but for the mind: Selling the fantasy that one can be an "intellectual" and a "freethinker" without ever doing much in the way of actual thinking. It's opportunistic and exploitative, but certainly not romantic. Dull people pouting because others find them tedious is nothing new, and it certainly isn't any form of intellectual rebellion.