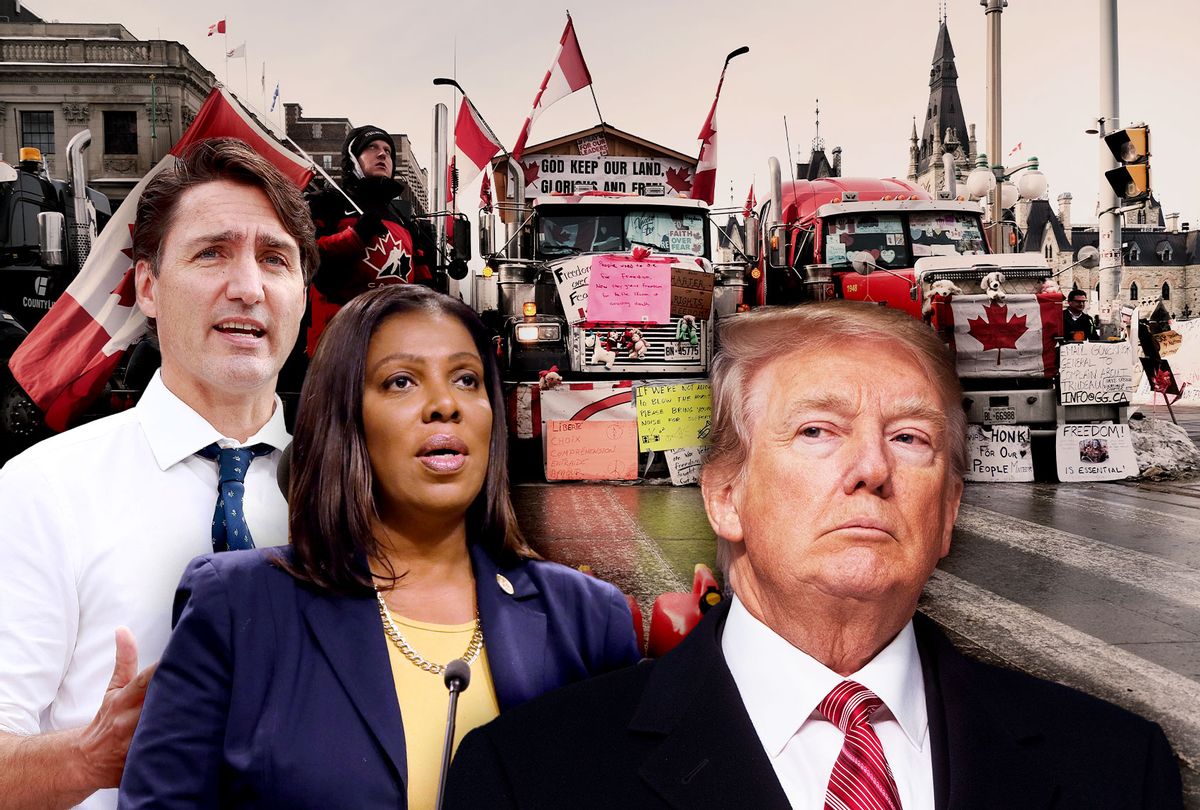 In the end, the Ottawa occupiers were left literally waving white flags.

After weeks of holding the Canadian capital hostage — with relentless honking and other abuse of the residents — Prime Minister Justin Trudeau finally brought an end to what pretended to be an uprising by truckers opposing vaccine mandates but was really a fringe minority trying to recruit more followers into a fascist movement. There had been a great deal of trepidation about violent resistance from the occupiers, who were big into chest-thumping and acting tough. Instead, they pulled out the most notorious symbol of surrender.

"By midday Saturday, protest leaders had thrown up the white flag figuratively and literally — organizer Pat King told his followers, quite wrongly, that waving a white flag meant they could not be arrested under international law," Paul McLeod of Buzzfeed reported.

They were lurking behind the tough "trucker" facade, but the truth is the protest was organized by far-right conspiracy theorists and was denounced by the Teamsters, the main trucker union. In the end, the weenieness of the occupiers got downright comical. The 911 line was flooded by protesters whining about being told to leave. Organizers kept saying unintentionally funny things like, "The vast majority of the truckers do want to withdraw, but it is an individual choice for any trucker." The official "Freedom Convoy" Twitter account released a statement not declaring any intent to stand firm but asking if they could just have a little more time to clear out since trucks are big and hard to move.

"Despite cries of 'Hold the line', the mood among protesters was dire Saturday, as they didn't even manage to hold the line until lunch," Mack Lamoureux of Vice reported.

There's a lesson in this for those who want to oppose rising authoritarianism: Don't be scared of these people. Most of them are paper tigers, who will fold if they are confronted with the threat of a real consequence.

Unfortunately, in the United States, far too many Democratic leaders are cowed by Donald Trump and his followers, behaving as if they are afraid that taking steps to hold them accountable will backfire and somehow only make Trump stronger.

In January, a year after the Capitol insurrection that Trump incited, Attorney General Merrick Garland made a mealy-mouthed statement promising, "The Justice Department remains committed to holding all January 6th perpetrators, at any level, accountable under law — whether they were present that day or were otherwise criminally responsible for the assault on our democracy." In reality, however, there is no real sign that he has any such intention of doing so. Trump incited the riot on live TV and so far, not only has he not been arrested but there is no real sign of any Justice Department-led investigation that would lead to such an arrest. The January 6 committee referred Trump's former chief of staff, Mark Meadows, on charges for contempt of Congress over two months ago, and still, there remains absolutely no sign that the DOJ has plans to arrest Meadows, either.

While there's still a lot of hope out there that Garland is working in secret and will reveal the mass arrests any day now, it's looking more likely by the day that we're dealing with what former FBI director James Comey dubbed the "chickenshit club" problem. That's when prosecutors avoid taking on rich and heavily lawyered criminals because they fear the court battles will be hard to win. The problem is, as Comey noted, you lose 100% of the fights you run away from. Trump, who will pay a lawyer ten times what he owes a contractor just to get out of the contract, has exploited chickenshittery in prosecutors his whole life. He is clearly hoping it will save his neck post-coup.

But New York's attorney general, Letitia James, has not shared Garland's timidity in the face of Trump's relentless threats of lawsuits and counter-filings. Instead, she's gone hard after Trump and his family, based on the extensive evidence of decades of fraud. So far, her willingness to put up a fight has garnered significant returns. Trump's accounting firm fired him, a sign they see his company as a ship they'd rather not go down with. And last week, a Manhattan judge ruled that Trump and his children must sit for depositions, after a ridiculous hearing in which Trump's lawyers spewed conspiracy theories about Hillary Clinton in a pathetic bid to confuse the issue at hand.

Last week, lawyers for Rep. Eric Swalwell, D-Calif., and for police hurt during the Capitol insurrection also demonstrated that fighting back works better than laying down. They are suing Trump for damages from inciting the insurrection and a federal judge shot down Trump's effort to throw the lawsuit out with facetious claims that he enjoys "absolute immunity" from such lawsuits.

And despite a lack of support from the DOJ, the January 6 committee has been doing a good job of accruing evidence that Trump's coup was extensive and organized. Plenty of what has been leaked indicates criminal activity Trump could be easily be arrested for either pressuring Georgia's secretary of state into fabricating votes, destroying evidence, or absconding with classified materials. The National Archives has now joined with the January 6 committee into unsubtly and publicly nudging a reluctant DOJ into doing something about this criminal who will absolutely attempt another coup if he's not stopped. And in standing up to Trump, both the National Archives and the January 6 committee show that sometimes victory is possible — but only if you actually fight.

The Supreme Court has rejected, with no noted dissents, former President Trump's appeal to stop the National Archives from handing over his WH records to the @January6thCmte, per @PeteWilliamsNBC.

End of the line for Mr. Trump's legal fight on this front

Maybe the fantasies of so many on Twitter will manifest and the cuffs will suddenly come out for Trump. Likelier, however, is what Brian Beutler of Crooked Media recently wrote of Garland in his newsletter: "[W]e'd be naive not to wonder how much of his reluctance to enforce the law against prominent right-wing criminals is driven by fear" of a right-wing backlash. The problem, however, is that "if crooks can opt out of the criminal law through public intimidation, we should wonder how much they'll ultimately get away with simply by threatening to whip up a public shitstorm if they meet any resistance."

To make it worse, as the Ottawa situation shows, the fears of resistance are likely way overblown. Most authoritarians like to talk big, but cave the second they face real consequences. (That is why vaccine mandates have been so incredibly effective at getting shots in arms.) Even the violence of January 6 doesn't disprove this point. As was quickly discovered once the FBI actually started arresting rioters, most of the people who stormed the Capitol did so under the delusion that they would never face actual consequences for doing so. They were so cossetted by white privilege that it simply didn't occur to them that committing a crime could lead to prison time.

Unfortunately, what was a delusion for the people who actually stormed the Capitol is just a lived reality for Trump and the other GOP leaders who led the coup from the safety of their overpriced hotel rooms. They are tearing apart our democracy with confidence. Not because they possess courage, but because they believe — so far, with good reason — that their opponents lack it.

Trump and his allies understand that it doesn't matter if the January 6 committee reveals every detail of the conspiracy to overturn American democracy. As long as none of the ringleaders go to jail for it, they will be free to try again. Next time, however, they will likely succeed.