An army of Republican Karens are fighting to end legal abortion in the U.S. 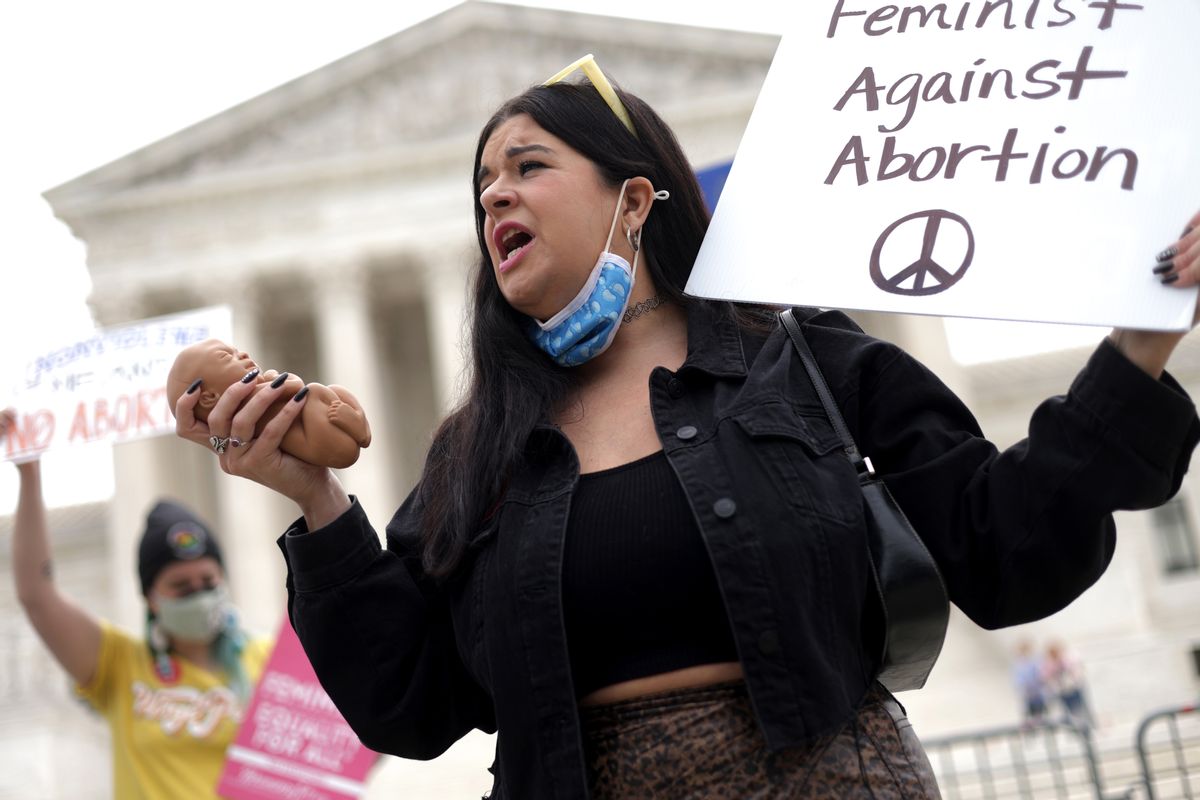 Pro-life activists rally for a ban on abortion in front of the U.S. Supreme Court October 12, 2021 in Washington, DC. (Alex Wong/Getty Images)
--

After Texas passed a sweeping abortion ban that outlaws any pregnancy termination two weeks after the missed period, what happened is exactly what pro-choicers predicted would happen: Women did whatever it takes to end unwanted pregnancies anyway.

Initial misleading reports claimed abortions in the Lonestar state went down 60%, a figure heavily hyped by anti-choicers who want to pretend that women are easily swayed from the abortion decision. Soon, however, the truth came out: Nearly all Texas women who wanted abortions got them by either going out of state or buying abortion pills online. The actual abortion rate was only down 10%. No doubt the few who were forced into unwanted childbirth were the most vulnerable Texans: Teenagers, immigrants, and poor women who don't have the means to find alternatives.

Republicans did not take the news about the real Texas abortion rate well, and their reaction was, naturally, to double down on the misogyny and sadism.

In Missouri, a bill was immediately proposed to ban interstate travel to get an abortion. The law, if passed, would allow anyone who wishes to sue someone who helps a patient leave the state to get an abortion. Neighbors who disapprove of parents helping a daughter get an abortion? Angry men who want to punish an ex by suing a friend who gave her a ride? Now they aren't just being invited to lash out in a misogynist rage, but to make money in doing so. The face of this bill — let's call it the Nosy Neighbor And Wife Beater Empowerment Act — is a woman, Republican state Rep. Mary Elizabeth Coleman.

A lot of folks remain surprised that a woman would back a law that literally wants to punish pregnant women by imprisoning them. So the phrase "internalized misogyny" got tossed around quite a bit to diagnose Coleman. But that, frankly, is an inadequate explanation. With Coleman and women like her — and there are many women like her — it's more useful to think of externalized misogyny.

In a male-dominated system, especially in red states and the Republican circles that these women move in, women are largely shut out of holding much real power. So these women are gaining power the best way they know how, by attacking other women. And the Republican Party, which is controlled by men, is only too happy to let the public face of misogyny be a female one.

A couple of years ago, the slang term "Karen" exploded into the national consciousness. It referred to white women who leverage racism and white supremacy in order to feel powerful, often by calling the cops on Black people for such non-crimes such as birding in Central Park, having picnics at the lake, or letting small children run lemonade stands. Gender played a central role in the public imagination of the Karen — but not because white women are any more racist than white men. It's because these women snatch power by play-acting feminine helplessness, often crying or acting scared in order to keep the upper hand. These women exploit their socially allowed role of being scared little girls in order to be big old bullies.

And this Karen dynamic is very much in play with female anti-choicers who generally play to sexist stereotypes, casting themselves as tender-hearted baby enthusiasts just indulging a maternal instinct. Like the Karens who pretend they're just trying to protect the delicate white women from Black people having picnics or watching birds, anti-choice Karens like to pretend they're just in this to protect other women. They often speak of other women as having no sexual desires of their own and needing to be shielded from the supposed evils of oversexed men forcing abortion upon them. There's heavy use of the phrases "as a mother" and "women deserve better than abortion."

In reality, of course, these Republican women are sadists, which is evident in their opposition to health care and the adequate child care necessary to have the babies they wish to force on other women. They go after other women for the same reason the cop-calling Karens go after Black people: Women are easy targets. And it's even easier because, to deflect from accusations of misogyny, the Republican Party desperately wants to put female faces on the flood of abortion bans they're passing. For a woman who yearns to dominate others, being the official author of these bills is an easy way to fulfill that desire.

Look at Republican legislators, and you'll see a sea of nearly all-male faces. But when it comes to anti-choice bills, the sponsors are disproportionately women.

Rep. Rebecca Alexander sponsored the proposed abortion ban in Tennessee. In Florida, it's Sen. Kelli Stargel. The Karen behind Idaho's newly passed abortion ban is Sen. Patti Lodge. In Pennsylvania, the Karen du jour is Sen. Judy Ward. The Mississippi abortion ban that the Supreme Court is likely to use to overturn Roe v. Wade? Written by state Rep. Becky Currie. The lady-sponsored misogyny is even branching out beyond abortion bans. In Wyoming, an attempt to abolish gender studies in universities was spearheaded by state Sen. Cheri Steinmetz.

The most obvious example of this trend, of course, is Justice Amy Coney Barrett, Donald Trump's appointment to replace Justice Ruth Bader Ginsburg on the Supreme Court. Nominating an over-the-top Aunt Lydia type to fill the seat of the beloved feminist was a standard Trump troll. Barrett's gender stands out among Trump appointees to the judiciary, 76% of whom were men. Republicans want the deciding vote on the overturn of Roe v. Wade to be a woman — she'll probably even be allowed to write the decision — just so they can say "neener neener she can't hate women because she is a woman."

But just because Barrett is a woman doesn't mean she can't hate women. On the contrary, her contempt for other women was on full display during arguments over the Mississippi abortion ban, in which she repeatedly insisted that it was no big deal to endure a forced pregnancy because "you can terminate parental rights" after birth. Barrett didn't think twice about the immense amount of suffering this would cause other women — the pain and suffering of childbirth, the months of nosy questions about a pregnant body, the stress at work and at home from being pregnant against one's will. Or worse, she has thought about it, and gets off on how much power she has to inflict massive suffering on other women.

Republicans want women to be the public face of the anti-choice movement for the blunt and obvious reason that it helps derail conversations into "debates" over whether or not women can hate women. But the psychology of the misogynist Karens isn't even that complex. The nosy neighbor, the scolding church lady, the prudish mother who bans her daughter from dating, the teacher who shames female students for wearing miniskirts: Female bullies are all around us. Like most bullies, they are cowards who prefer to punch down. And other women just happen to be easy targets.