"I get threatening messages from people saying they are watching me," said a now-resigned public health official 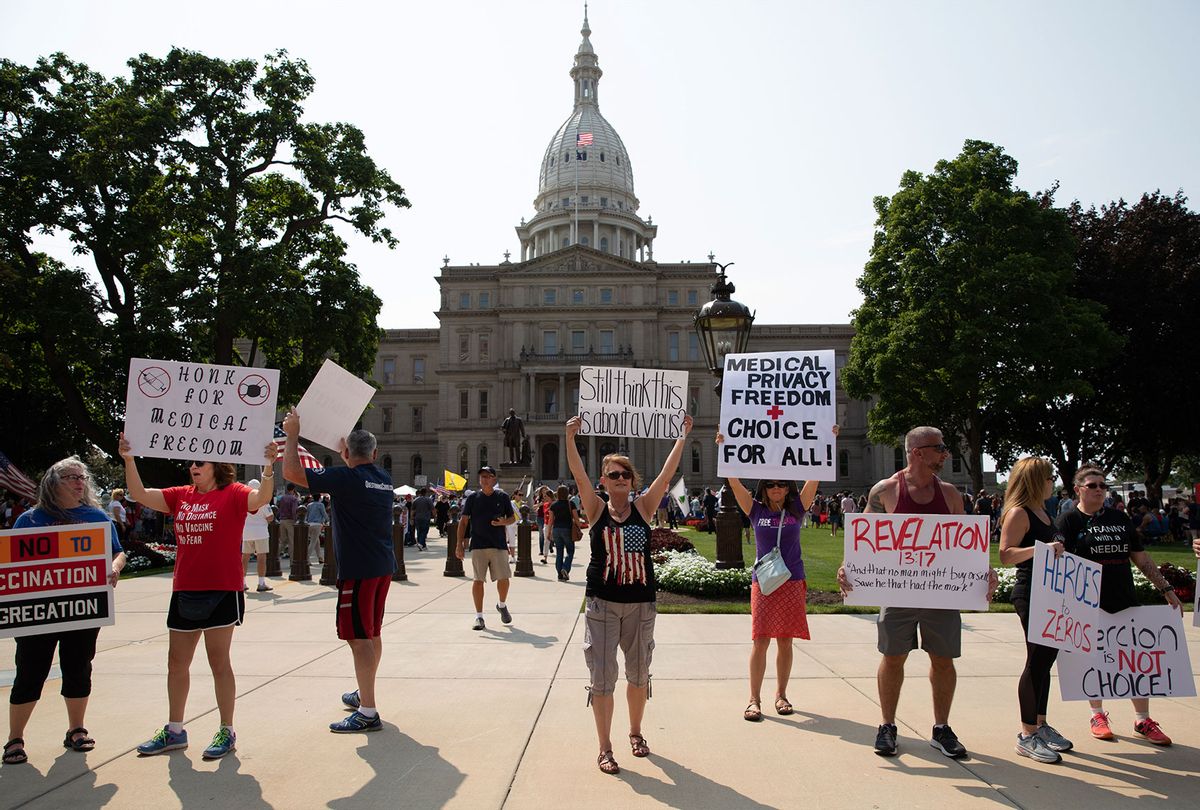 A group demonstrators hold signs as they protest against mandated vaccines outside of the Michigan State Capitol on August 6, 2021 in Lansing, Michigan. There were 44 counties in Michigan at high or substantial levels of community coronavirus transmission, according to the U.S. Centers for Disease Control and Preventions case and test positivity criteria as of August 5, 2021. (Emily Elconin/Getty Images)
--

To quantify the gravity of harassment public health figures faced during the pandemic, researchers looked at data from a national survey of local health departments — conducted by the National Association of County and City Health Officials (NACCHO) — and searched media reports of harassment and attacks.

According to the new study published in the American Journal of Public Health, led by researchers at the Johns Hopkins Bloomberg School of Public Health, there were 1,499 unique reports of harassment across local health departments during the first 11 months of the pandemic, between March 2020 to January 2021. More than half of surveyed local public health departments from the NACCHO survey —57 percent— were targets of harassment. Estimates show that there are over 2,500 local and state public health departments across the country; at least 335 had leadership attacked or harassed during the beginning of the pandemic.

The researchers estimated that at least 222 public health officials left their jobs during the timeframe, too. Over one-third of those departures—36 percent—involved officials who had experienced some form of harassment.

"This is a wakeup call for the field about the need to prioritize the long-term protection of our public health workforce," said Beth Resnick, one of the leading authors, in a press statement. "Taking care of the workforce needs to be a fundamental component of the public health infrastructure that doesn't end when the pandemic does."

"No public health professional should feel undervalued, unsafe, or be questioning the fundamental mission and purpose of their work," said Resnick. "We need to do better and prioritize worker well-being and safety by implementing policies that reduce undermining, ostracizing, and intimidating behaviors to support these key workers and leaders."

"I get threatening messages from people saying they are watching me. They followed my family to the park and took pictures of my kids," said one official, who eventually resigned. "I know it's my job to be out front talking about the importance of public health — educating people, keeping them safe. Now it kind of scares me… when they start photographing my family in public, I have to think, is it worth it?"

The authors suggest that training public health officials on how to respond to political and societal conflict, and establishing robust reporting systems for incidents are key to reducing acts of harassment when they do occur.