"The View" hosts side with Chris Rock after on-air Oscars slap: "Comedians are in danger everywhere"

Beyond the shock and jokes, here's Hollywood's reaction to Will Smith's defense of his wife 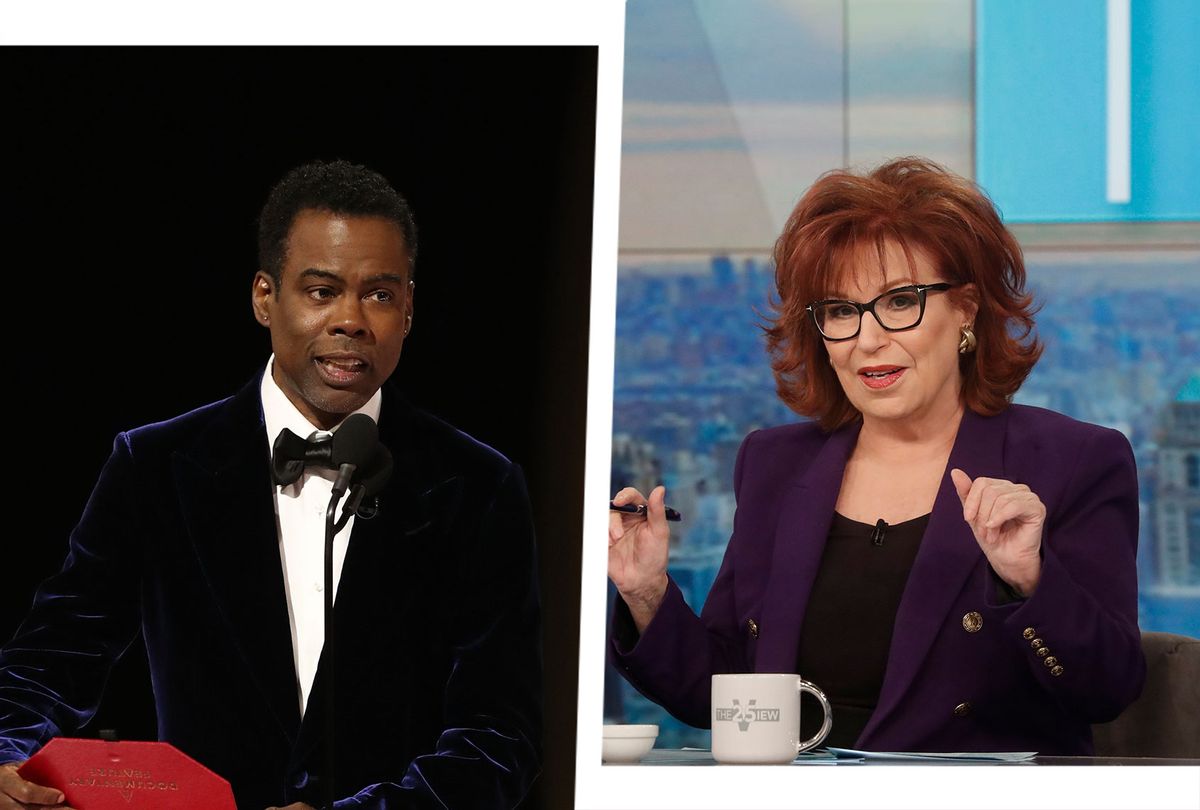 The biggest moment from Sunday night's Oscars telecast wasn't Troy Kotsur's historic win for best supporting actor, Jessica Chastain's impassioned speech after securing the best actress award or the multiple Oscars won by "CODA." Instead, it was Will Smith's violent reaction to Chris Rock's onstage joke — an unexpected incident that prompted "The View" hosts to weigh in.

On Sunday night, Rock took the Oscar's stage to present the award for best documentary feature and made a joke about Jada Pinkett Smith and her alopecia. "Jada I love you," Rock said. "'G.I. Jane 2,' can't wait to see it." Will Smith, displeased with his wife being targeted, walked up to Rock and smacked him across the face. In an uncensored clip of the broadcast, Smith can be heard yelling, "Keep my wife's name out of your f**king mouth!" twice.

Smith later appeared on stage again to accept his award for best actor in a leading role for his portrayal of Richard Williams in "King Richard." He addressed the altercation in his speech.

"Richard Williams was a fierce defender of his family. In this time in my life, in this moment, I am overwhelmed by what God is calling on me to do and be in this world," Smith said tearfully. "I want to be an ambassador of that kind of love and care and concern. I want to apologize to the Academy. I want to apologize to all my fellow nominees."

RELATED: Will Smith slapping Chris Rock made the 94th Academy Awards one to remember — for the wrong reasons

On Monday's episode of "The View," the co-hosts side with Rock, claiming that Smith's on-air violence is more harmful than Rock's insults.

"I was thinking, 'Comedians are in danger everywhere,'" says Joy Behar, who has a history in comedy. "They [audience members] want us to be edgy, they want us to go out there and say things that other people are just thinking. They want us to take a risk and then they get mad."

Co-host Ana Navarro emphasizes that hitting someone "is a crime of assault." And although she acknowledges that Rock's jokes about Pinkett Smith crossed the line, "nothing, nada, cero, condones violence in this form."

Sunny Hostin calls Smith "immature, childish and violent," noting that he also failed to publicly apologize to Rock in his acceptance speech.

"I thought Chris was the one that deserved an apology for taking the high road," she says. "He was slapped in front of millions of people internationally and he took the high road in his response."

Hostin added that Smith's behavior wasn't admirable but rather, an outward display of "toxic masculinity."

"When you live publicly, you don't have the right to execute violence," she continued. "And I have to say that was a show of toxic masculinity…you don't act out in violence. That was not a show of love, that's a show of violence."

Whoopi Goldberg, who is both a comedian and a previous Oscars host, believed Smith had a lot of built up anger from past jokes made about his marriage and family life. She said Smith "overreacted" in the end and praised Rock's composure and his decision to not respond with more violence.

Watch the first part of the discussion below, via YouTube:

Since it was Hollywood's biggest night, several others in entertainment took to Twitter to share their thoughts about the slap and who was in the wrong.

Former "The View" co-host Meghan McCain wrote, "Tonight really hasn't helped with the stereotype that most people in Hollywood are insane and get away with anything because of celebrity."

Comedian and actor Kathy Griffin bashed Smith and said, "it's a very bad practice to walk up on stage and physically assault a Comedian. Now we all have to worry about who wants to be the next Will Smith in comedy clubs and theaters."

In a now-deleted tweet, fellow comedian and director Judd Apatow took it to the extreme, stating that Smith could have killed Rock with his slap.

"They've heard a million jokes about them in the last three decades," Apatow said about both Smith and Pinkett Smith. "They are not freshman in the world of Hollywood and comedy. He's lost his mind."

Whitney Cummings took the incident to defend all comedians and her view that others are overly sensitive to jokes, tweeting, "I mean, it's amazing that twitter attacking comedians for making jokes here about last night don't see that they're doing the same s**t Will did last night. When people take jokes literally, society is just over."

"One Tree Hill" star Sophia Bush also criticized Smith, stating, "Violence isn't ok," and "Assault is never the answer." She also condemned Rock's joke, claiming, "This is the 2nd time that Chris has made fun of Jada on the Oscars stage, and tonight he went after her alopecia."

"Punching down at someone's auto-immune disease is wrong. Doing so on purpose is cruel," she continued. "They both need a breather."

On the other hand, Smith's son Jaden Smith tweeted a few words of support for his dad:

The Los Angeles Police Department told Variety in a statement that Rock has "declined to file a police report" following the incident.

The incident clearly caused quite the commotion both on and off the stage, even prompting the official account of the Academy of Motion Pictures Arts and Sciences to clarify its code of conduct. The Academy did not initially name Rock or Smith in their tweet from Sunday.

"The Academy does not condone violence of any form," the organization wrote. "Tonight we are delighted to celebrate our 94th Academy Awards winners, who deserve this moment of recognition from their peers and movie lovers around the world."

As of Monday, however, the Academy gave an update on their position.

"The Academy condemns the actions of Mr. Smith at last night's show,"  the organization said in a statement. "We have officially started a formal review around the incident and will explore further action and consequences in accordance with our Bylaws, Standards of Conduct and California law."