"Dual" director on a world where Karen Gillan duels her own clone for survival: "Karen is a maestro"

Stop hitting yourself! Riley Stearns spoke to Salon about the dystopia where you're literally your own worst enemy 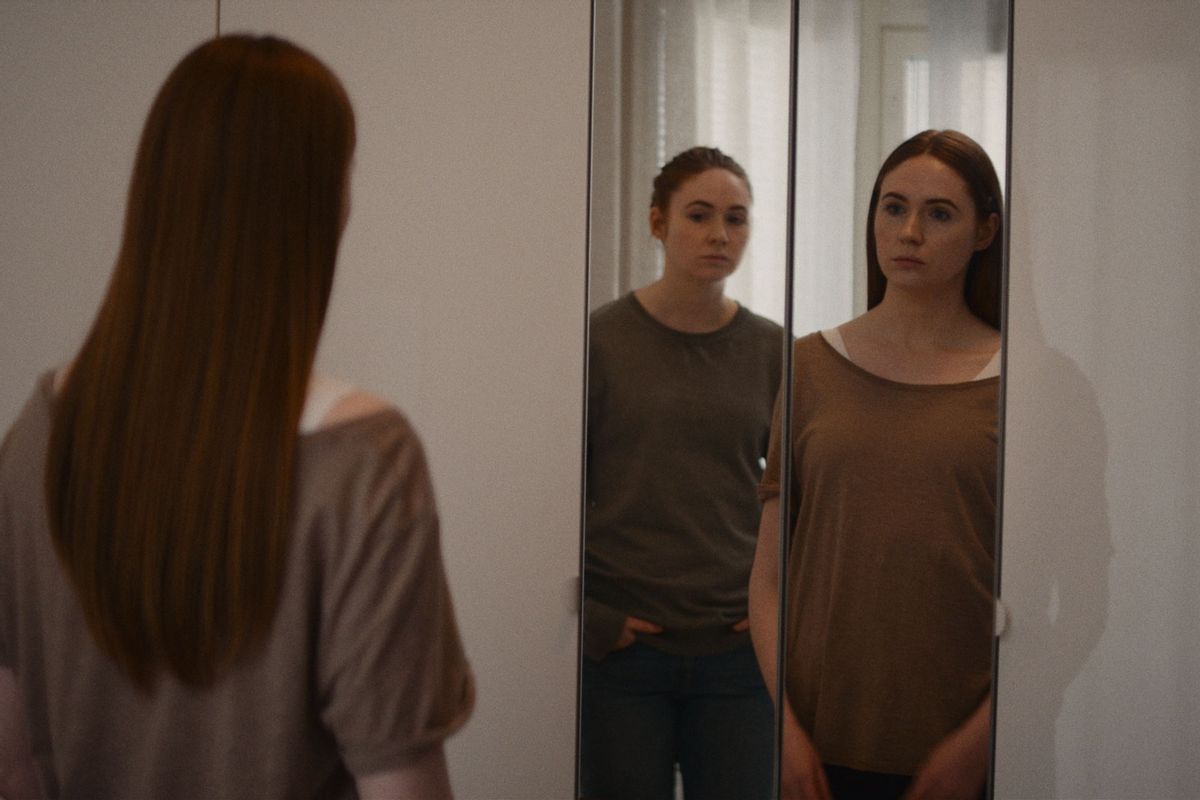 Written and directed by Riley Stearns ("The Art of Self-Defense"), the nifty sci-fi flick "Dual" is set in a world where people can be cloned to "maintain their identity" after death. The idea is to spare their friends and family grief after losing their loved one. However, both doubles and their original cannot coexist, so in such cases, there is a duel to the death between folks and their clones.

This canny idea is played out in the film as Sarah (Karen Gillan) is told she is terminally ill. (She is throwing up blood.) She decides to invest in a clone and puts her life in order only to be told she is in remission, and now must deal with the consequences. This includes not just a duel to the death with her dual, but also separating from her husband Peter (Beulah Koale), who prefers Sarah's clone over Sarah.

Taking matters into her own hands, Sarah hires Trent (Aaron Paul), a personal combat trainer, to prepare for the duel. But then something happens . . .

RELATED: Meeting my hot doppelgänger: A Salon After Dark read

"Dual" delivers a clever satire on relationships, violence in society, and issues around individuality, change, and freedom. Stearns recently spoke with Salon about his stylish new film.

"Oh, they are going to have to duel themselves to the death!"

What prompted you to make a film about cloning? This is becoming a real subgenre.

I wrote a short film after I made "Faults," that had a person interact with their future self. I really liked the idea of having an actor perform opposite themselves on screen. I know that's something that we've seen before, but I thought there might be another cool way of turning that visual into feature. I came up with the idea of replacing yourself if you know that you're dying so your family won't have to suffer to suffer the loss of you. I thought that was an interesting idea, but why is that worth making? We have now seen things similar to that, with "Swan Song," but once I asked the question of what would happen if that person went into remission, it became, "Oh, they are going to have to duel themselves to the death!" And that's where the film became a film for me and worth pursuing. I really liked the humor of exploring the mundane things in life that make us sad, or feel like our lives are in a rut in the context of this bigger thing that she's training for and run with that.

"Dual" suggests what a "new" life might look like, and I appreciated the themes of reinvention. Your film gets at both the happiness we can pursue in our lives when we have freedom, as well as how we want to change the people we love. What are your thoughts on these provocative topics which are raised in the film?

I liked the idea of looking at yourself and wondering, "Am I the best version of myself?" If something bad happens in your life, do you let that bring you down, or do you now say I am going to make a better version of what I had before? In "The Art of Self-Defense," a lot of it is about Casey (Jesse Eisenberg) trying to find something that makes him better, and find meaning in his life and a community to belong to. Similarly, in "Dual," Sarah is actively trying to make a change for the better in her life, and obviously it can't always work that way, and even if we are trying, it doesn't mean life is going to go in that direction that we want it to go. But it was important for me to say things in a personal sort of way, but in the context of a sci-fi narrative. Most writers try to put themselves in the story but then not make it a story about yourself. These are all things I think about. I like the introspection. I like the thought of, "Who am I? Do I define who I am? Does my life define who I am? Can I change that?" These are all things that I was cognizant of while I was writing, but I also wanted to make it funny, so you find things to bring a sense of humor out, even if it's dark. I followed my instincts.

"Dual" is a darkly funny satire. I especially like the reverse "Clockwork Orange" bit where Sarah watches violence to become more comfortable with it. I also snickered at the line Sarah's husband Peter tells her, "Even if I can't be with her, I don't want to be with you." Can you talk about the deadpan nature of this film in particular, and your films in general?

The way that an actor delivers their lines can benefit a world or take away from it. In delivering these lines, if you say them as a normal person would, the people are going to sound crazy, and the world is not going to make sense. The world in "Dual" looks a certain way, and the lines are being said a certain way — all of that feeds into each other. I really feel if you say some of these things like a joke or like a normal person would, they are not funny, but if you say it matter-of-factly, that's where humor comes from. There are moments when the actors emote a little more, or let their emotions shine a little more, or give more of an inflection on a line, but for the most part, it is about trying to stay removed, where nothing shocks you in the world. I try to stay in this space.

The film has a very sterile feel which pulls viewers in. Can you talk about your visual approach to telling the story?

My visual approach was to remain not necessarily voyeuristic — I feel that word is used improperly — but I wanted folks to feel they are watching everything happening and not participating. When the camera goes handheld, I feel like you are actively participating more, but I didn't need that for this. There is handheld scene when Sarah and Peter are having a fight on the porch, and I felt it warranted coming in closer and being involved more, to feel what they are feeling, but a lot of it is feeling like an observer. I like we had minimal camera moves – subtle dollies and slow zooms. It's a little bit less abstract than "The Art of Self-Defense;" "Dual" is more grounded. But folks feel that nobody talks like that, it's sterile, or impersonal, but it's funny because it feels really relatable, and personal, and grounded to me.

What can you say about building the world which is dystopian, but also resembles life as we know it. Can you talk about that dichotomy?

I like that the film starts in that [familiar] space and opens up to this bigger world. But it's important to know the rules going in. It's not changing as things go along. Knowing the construct, you can follow the rules. We don't want to over-explain technology; we actively went against that. When Sarah is about to get information on how something works, she actively skips it because it's not interesting enough. That kind of exposition can weigh a film down. So, I use that as humor; that was funny to me and a nod to exposition.

I love building worlds and I love that we were able to shoot in Finland and have it feel like our world. It may be in the Pacific Northwest, but why is the architecture so different and the skies the way they are, and everyone has different accents? It's never stated where we are on purpose because I wanted you to live in a world and not think about the United States. At one point money is literally placed in my hand — and it's still cringey that I'm in the movie — so you know we are in the States in one shape or form, but it's removed of everything you know.

"Karen is the maestro."

How did you work with Karen to create two distinct characters, but also create the ambiguities to keep viewers off guard?

We were very adamant that the characters not feel too different, but embrace the subtitles of difference; not to feel like night and day. It was important for the audience to see that Sarah's double was her own person. Karen was extra diligent in the lines she had to learn and the way she had to deliver them. Normally, you have another person [acting with you], but she's doing it all herself. I can't take any credit there expect for how I wanted her hair and makeup to be ever so slightly different and her performance to be ever so slightly different. Karen is the maestro. 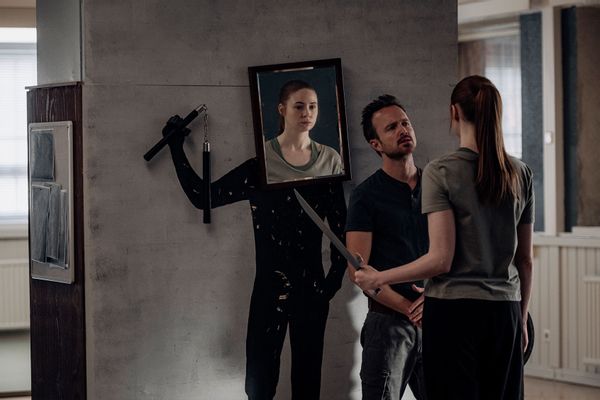 (L-R) Aaron Paul as Trent and Karen Gillan as Sarah in the sci-fi film, "Dual" (Photo courtesy of RLJE Films)Like "Self-Defense" you have a teacher/mentor relationship in this film. Why does that theme reappear in your work? Do you have a sensei or coach that had an impact on your life?

Not directly. It's a by chance thing, and the duel and needing to train for that. I train and teach jiujitsu, and I have been doing that for nine years. There are people in my life who I've looked up to as mentors. But those have not directly related. I haven't had a self-defense mentorship or sensei. It is more this idea of being indoctrinated by someone. In "Faults," and "Dual" and "Self-Defense" and even my short, "The Cub," it's learning from someone who has ill will or ill intentions, and I liked that this was a mentor where even as I set him up as someone who maybe he does not have Sarah's best interest at heart — but maybe he does — it was subverting expectations.

Let's ask a question raised in "Dual": Do you have a killer instinct? What prompts it to come out?

Wow, that's crazy! Getting back to jiujitsu, when I am in sparring mode or when I compete, my killer instinct comes out when I am ahead in points. When I am behind, I tend to fall into that, but there's this motivation when you are ahead, or when I am on top, that I kind of just want to rub it in their face. I should be relaxing in that moment and trying when I am behind. I'm not like that in any other aspect in life.

"Dual" is in theaters April 15. Watch a trailer for it below, via YouTube.