Paul McCartney's "Tug of War" at 40: A self-aware solace written in the wake of John Lennon's death 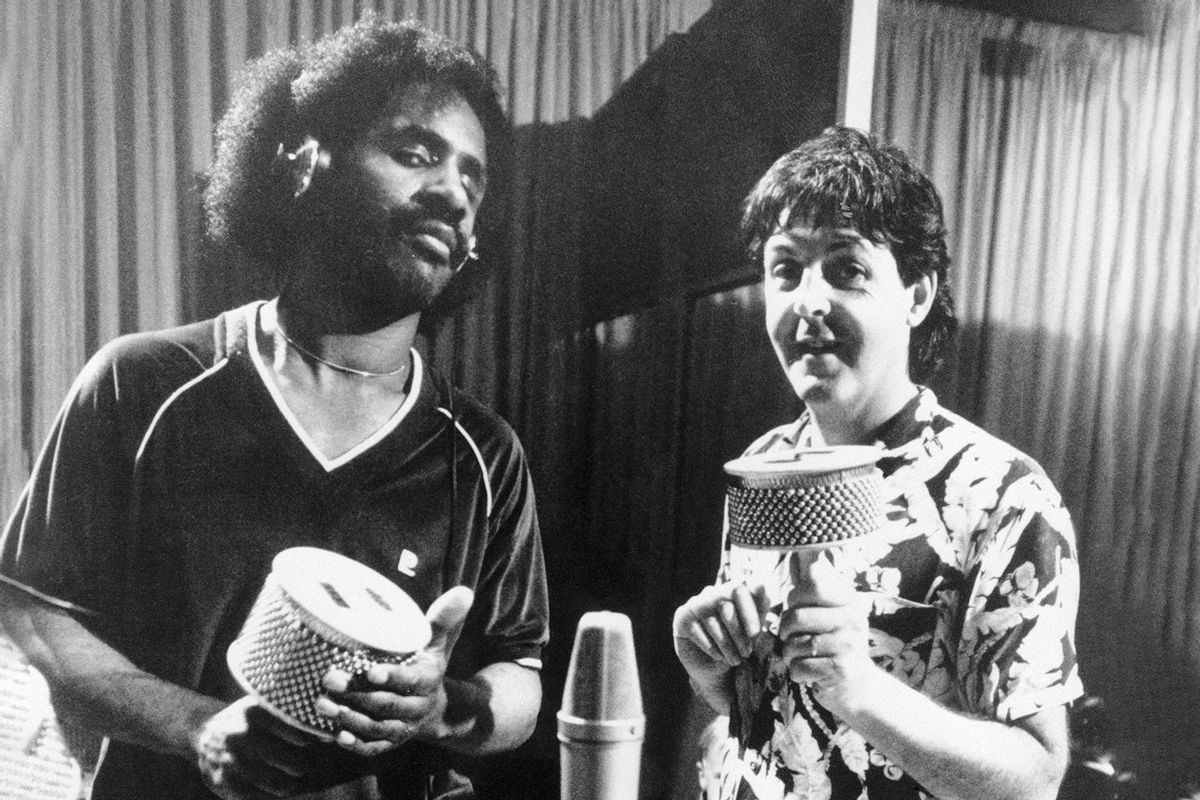 In hindsight, it's incredible that Paul McCartney actually finished his third solo album, "Tug of War." He was in the middle of recording it at the George Martin-founded AIR Studios London in December 1980 when his former Beatles bandmate John Lennon was killed in New York City. After (understandably) taking a recording break, he finished "Tug of War" in 1981, moving locations to AIR Studios Montserrat for more privacy.

Surprisingly, McCartney ended up heading to the studio in London in the direct aftermath of the terrible news about Lennon's death. That day, he worked on "Rainclouds," which ended up as the b-side of "Ebony And Ivory." The December session wasn't necessarily productive, although it provided a refuge from press and offered familiarity at a time of great grief.

For McCartney, recording music had long represented solace in times of great turmoil.

Chieftains member Paddy Moloney, who was at AIR Studios that day to record Uilleann pipes for the song, was quoted in John Glatt's "The Chieftains: The Authorized Biography," about the experience. "Afterwards a lot of people said they thought it was unusual that Paul had gone into the studio after John's death. But I thought, 'What else would he do?'"

For McCartney, recording music had long represented solace in times of great turmoil. His debut solo album, a 1970 self-titled affair, emerged from the Beatles' breakup. His second solo full-length, "McCartney II," arrived in 1980 as Wings were falling apart. "Tug of War," meanwhile, certainly hints at trying to balance discord.

However, McCartney had an elliptical answer when asked about "Tug of War" being a concept album, admitting to Club Sandwich:

"I like the idea of a little bit of regimentation, but a lot of stuff that was just kind of free-flying amongst it all. This is a sort of loose concept, sort of starts with a concept, flows into some stuff that you could vaguely say was in the concept, but it starts sort of free-flowing all over the place. But eventually, by the time it gets to the end of the album, it sort of returns to the concept. So, you know, it's just like a very loose one."

McCartney might be underselling the loose concept claim a bit. "Tug of War" is often about the push and pull of opposing forces: reconciling racial tension ("Ebony & Ivory"), stock market volatility ("The Pound Is Sinking"), interpersonal friction ("Ballroom Dancing"). "Take It Away" is even a lighthearted look at an aspiring young band ("You never know who may be/Listening to you") who balances wanting fame with loving to play. "Wanderlust," meanwhile, is a true story about dealing with conflicting personalities: On a long-ago recording trip, McCartney and his group switched boats — the new one was appropriately named "Wanderlust" — because they meshed better with the captain's personality.

Interestingly enough, "Tug of War" is generally less direct when mentioning Lennon, as if McCartney wants to tread lightly about the give-and-take between them. The title track has oblique references to their songwriting dynamic ("With one thing and another/We were trying to outdo each other/In a tug of war") while "Somebody Who Cares" is a long-distance reminder to a friend that they aren't alone.

"Tug of War" is generally less direct when mentioning Lennon, as if McCartney wants to tread lightly about the give-and-take between them.

The notable exception is "Here Today," which has remained in McCartney's setlist all these years later, even on opening night of his new Got Back Tour. The touching song directly references the divergent nature of the pair's post-Beatles lives: "You'd probably laugh and say/That we were worlds apart/If you were here today." However, McCartney's sentimentality once again peeks through like a lone sunbeam, as simple strings swell as a backdrop: "For me, I still remember how it was before / And I am holding back the tears no more / I love you."

The circumspect nature makes sense, as McCartney initially was reluctant to honor his friend. "I worried that it might not be good enough and that someone might think I was trying to cash in on it or something," he told The Los Angeles Times. However, he noted that his pragmatic side eventually took a backseat. "I've always had two sides to me: the creative and judicial. The creative starts to do something, and the judicial starts to question and second-guess: 'Is that right? Does that make sense? What will people think?' I've begun trying to make sure the judicial doesn't interfere with the creative."

Fittingly, "Tug of War" is an excellent example of McCartney balancing his judicial (read: sentimental pop) and creative ('80s rock) sides. That balance wasn't quite aligned on his previous solo album, "McCartney II." Released in 1980, the album drew on then-new equipment such as synths and sequencers while referencing blues songs and interpolating silly wordplay from a children's book. A song like the jittery, synth-pop cult classic "Temporary Secretary" especially nodded to the nervy new wave and keyboard-heavy music beginning to dent the pop charts.

RELATED: The day George Harrison walked out of the Beatles

"Tug of War" also embraces modern sounds, but these moments fit in effortlessly. "Dress Me Up As a Robber" boasts an easygoing disco-sizzle vibe and flamenco guitar and pleasing falsetto vocals, while "What's That You're Doing?" is pure robo-funk thanks to guest Stevie Wonder. "It originally just started off with Stevie Wonder jamming – Stevie is an inveterate jammer, as they say – and he was on the Yamaha CS80 synthesizer and started playing," McCartney told Club Sandwich.

It's notable that McCartney did turn to a whole crew of familiar collaborators for "Tug of War": studio icons George Martin and Geoff Emerick, his Wings bandmates Denny Laine and Linda McCartney, even Ringo Starr. In contrast, "McCartney II" was born from solo studio sessions where McCartney played every instrument and wrote and perfected every song himself. Making a record with other people allowed McCartney to achieve better balance — the ability to perfectly triangulate his past (including Beatles and Wings) with his present solo guise.

"Somebody Who Cares" is a lovely, meditative gem with melancholy guitar and a chorus of lush backing vocalists. "Ballroom Dancing" has Fab Four irreverence in the way it conjures a lively dancefloor, with peppy horns, jaunty piano and bouncy grooves from guest Ringo Starr. "Get It," with guest Carl Perkins, flashes back even further, to McCartney's long-held love of '50s rock 'n' roll. Yet the unabashedly pop moments — the U.K. and U.S. hits "Take It Away" and chart-topping "Ebony & Ivory" — absolutely feel like McCartney proving he can hold his on with any '80s pop and rock upstarts.

On "McCartney II," McCartney embraced solitude and introspection. Looking inward led to lyrics inspired by what matters to him: home, family, and love. In fact, despite solitary roots, the trilogy concludes that being in the world surrounded by (and connected to) other people brings solace and joy. "Tug of War," meanwhile, reflects the deep self-awareness McCartney has about his place in the world — and the way he knows his grief will be under a microscope. As someone who's been extremely famous since he was young, McCartney navigates this thorny challenge with ease, revealing hard truths and expressing what matters while allowing space for everyone else to fill in their own emotional blanks.