The murky origins of the Mother-in-Law, a Chicago tamale-hotdog hybrid 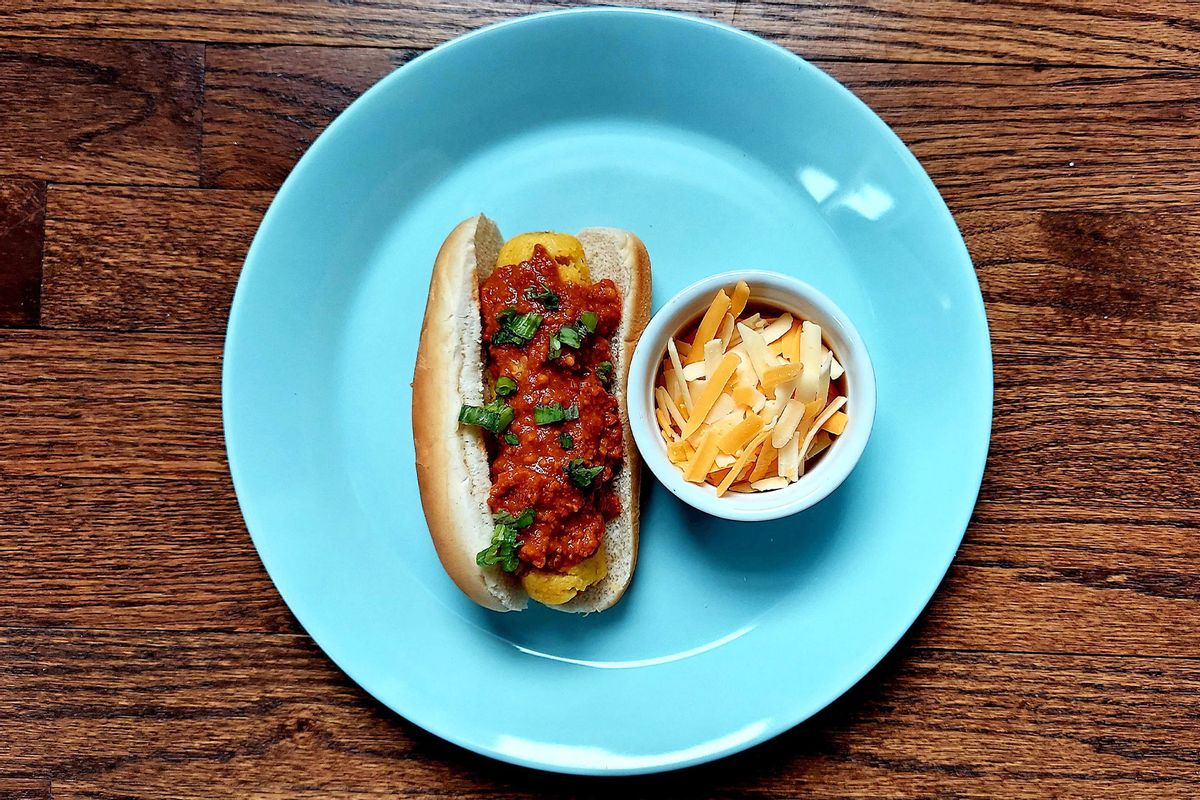 This story was updated on May 6 with additional context from Gustavo Arellano's "Taco USA: How Mexican Food Conquered America."

There's a well-worn joke about how the Chicago Mother-in-Law got its name. Both the sandwich — a just-shy-of monotone creation made by serving a chili-covered tamal on a hotdog bun — and one's mother-in-law have the distinct ability to cause heartburn. Anthony Bourdain went with a different familial cliché, once calling it the "evil stepbrother of the hotdog."

It's a meaty, carb-heavy mess, primarily sold these days at Fat Johnie's Famous Red Hots, a rough-around-the-edges hot dog stand sandwiched between a Popeye's and a used car dealership on the city's southwest side. The owner, John Pawlikowski, is clear about the fact that he didn't create the dish. Rather, he first tasted something like it when he was in 8th grade after a Lithuanian-American vendor sold him a tamal on a bun, which was topped with ketchup, for a nickel.

The further back one goes, the more tenuous the Mother-in-Law's roots become. What quickly becomes clear, however, is that those roots, if charted, illuminate the ways in which Mexican immigration has forever changed our country's foodways. Indeed, Chicago is full of sandwiches with roots that tell the history of immigrants — such as the city's Italian Beef and Gym Shoe sandwiches — stories that are often nuanced and complex.

As Gustavo Arellano wrote in his book "Taco USA: How Mexican Food Conquered America," tamales have been served in Chicago since before the World's Columbian Exposition in May 1893. Robert H. Putnam, a San Francisco businessman who founded the California Chicken Tamale Co., sent representatives from his company to Chicago as it was preparing for the Exposition. They were planning on selling "hot chick'n tamales, tensentsapiece."

"Putnam created a hit," Arellano wrote. "Within five months, he was hiring two to three men a week until he amassed a force of more than five hundred working Chicago's streets."

Peter Engler, a Southside food historian, points to a letter written by José María Velasco, a celebrated Mexican artist who was in town to assist with the display of art.

"When passing through these streets, we ran into a man who had a tin box and a white cloth in front of it that said ' 'Mexican Tamales,''' the letter reads. "We got closer and asked him if he was Mexican and he answered that he was; I bought ten cents worth of tamales which he sold to me at one cent a piece."

Velasco took the tamales to a "place where they sold beer" and proceeded to try one. "They were delicious," he concluded, though they were "a bit small and with too much aniseed."

Chicago's Mexican population wasn't very robust at that point; Engler said there were only about 500 documented Mexican residents in the city up until about 1910. However, those who were there sustained food traditions from home — and it made a big impact. As Engler wrote for "The Chicago FoodCultura Clarion" in 2020, tamales become deeply interwoven with the city's culinary fabric.

RELATED: The only sugar-rimmed margarita worth drinking is in Chicago

Steven Alvarez, a professor at St. John's University and the originator of the popular "Taco Literacy" course, said tamales were a natural recipe for immigrants to bring with them because the dish was so central to Mexican cuisine.

"It really comes back to corn and the various ways to prepare corn," Alvarez said. "The chemical process by which corn was transformed into hominy is called nixtamal. So the word 'tamal' is in the word for that process."

Alvarez's Taco Literacy course focused on the social evolution of Mexican food in the US. That said, he jokes that the course could have easily been called "Tamales Literacy" instead.

"It's an ancient food, and it goes all the way from Tierra del Fuego all the way up to up to North America. It also has so much relevance because in Latin America, different groups have their own variations of tamales — and the same is true in the United States."

"You still really get the roots of understanding people, the movement of food," Alvarez said. "It's an ancient food, and it goes all the way from Tierra del Fuego all the way up to up to North America. It also has so much relevance because in Latin America, different groups have their own variations of tamales — and the same is true in the United States."

To that end, a Chicago-style tamal, often referred to in the singular here as "tamale," is distinct from both the tamales served in Mexico, as well as those available in the Mississippi Delta, which are made with cornmeal (as opposed to masa) and boiled, rather than steamed. A Chicago tamale is a slim, machine-extruded tamale, also made with cornmeal. It's often wrapped in paper, as opposed to corn husks, and is sometimes fittingly cooked in a hot dog steamer.

"And now, any hotdog stand — well, most classic hotdog stands — in Chicago sells these tamales," Engler said. "Either Supreme or Tom Tom brand."

As for how those tamales ended up on hot dog buns, slathered with chili? Engler said it's almost impossible to point to a single point of origin — especially as many of the old-school joints that once served them are slowly disappearing, a process the pandemic only seemed to hasten.

"When I talked to the owner of Tom Tom tamales, he said he remembered them being sold off a place off of 51st in the early 50s," Engler said.

Likely, the sandwich was more widely adopted during the Great Depression as a means to stretch cheap ingredients and minimal meat into a filling meal. However, Alvarez said there's definitely a Mexican corollary that may have provided inspiration.

"The sandwich you are describing is interesting because in Mexico, and particularly in Mexico City, there's a tamale sandwich called the guajolote," Alvarez said. "It's this carb overload, usually a breakfast food that's two tamales inside a bolillo, which is a big roll. It's kind of the same idea. Tamales and their utility for working people as food on the go, it's just cross-cultural."