After the death of a teen in the 1970s, the role-playing game beloved by the Hawkins kids was blamed 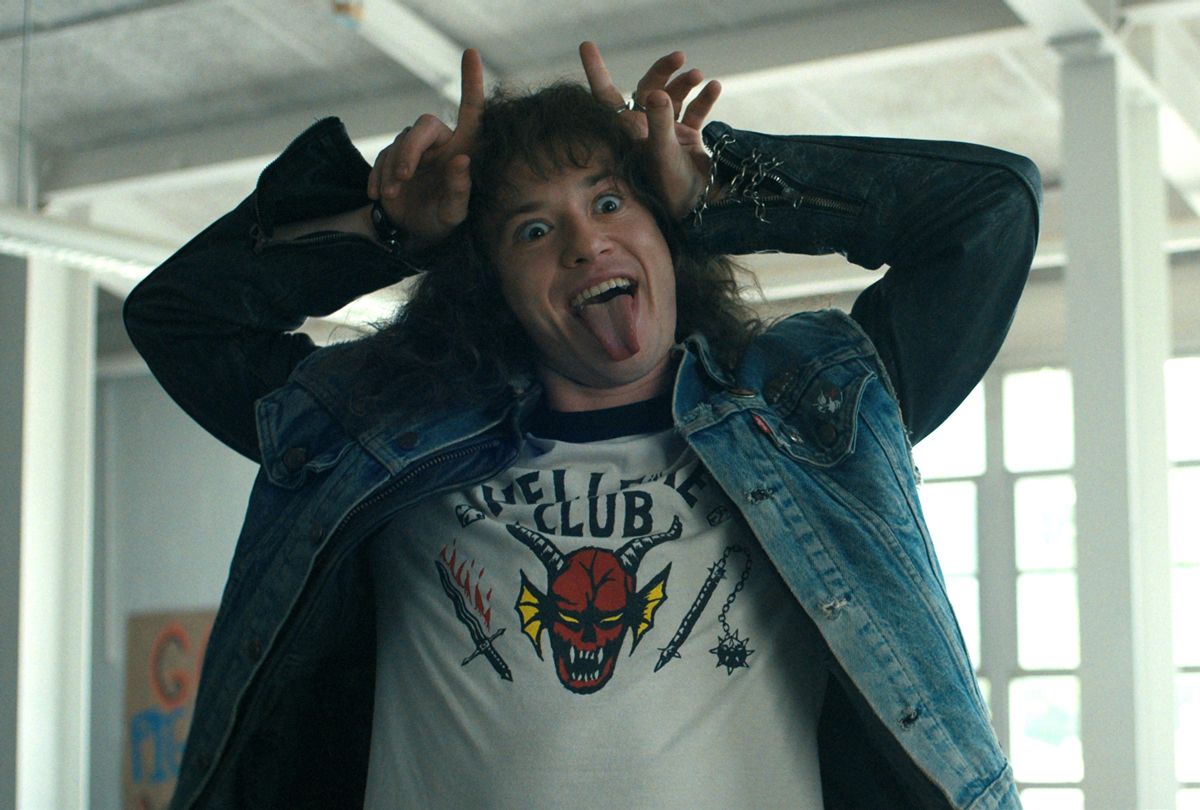 The children of "Stranger Things" are called a lot of names by their terrible classmates. "Freaks." "Losers." "Nerds." In its fourth season, we are witness to some new ones: "snitch," and, in reference to some of the kids collectively: "a cult."

Really? The ragtag band of lovable outsiders a cult? Sure, they follow Eleven, but if one of your friends had superhero powers (even if she doesn't currently have them) and had saved your life multiple times, wouldn't you listen to her too? But it's not El the children are accused of unquestionably following. It's Eddie Munson (Joseph Quinn), a super senior at Hawkins High who leads a Dungeons & Dragons gaming group called The Hellfire Club.

Eddie is a long-haired dungeon master (the energetic Quinn resembles Eddie Van Halen more than a little) and being much older than the other high schoolers (he's been held back a few years): their natural, if bombastic, leader. On Wednesdays, we wear Hellfire Club shirts.

The main kids of "Stranger Things" have never fit in and it doesn't look like much has changed in high school, despite Lucas' attempts to get in with the jocks. Though they've found a group who loves the same role-playing game, our heroes exist on the fringes of it. But when murder comes to Hawkins, as it always seems to, it comes darker and more graphic than ever, and for some of the more . . . conventional high school citizens, Eddie looks like a good person to blame.

He is a satanist, after all.

RELATED: "Firestarter" taught me the mighty power and powerlessness of childhood

What is the Satanic panic and how does it relate to the Netflix show? The moral outrage, which blamed abusive Satanists for the ills of society, was not only raging in the mid-'80s, when "Stranger Things" is set, it's still happening today.

It's hard to pinpoint the exact start of the Satanic panic, but the late 1960s and '70s were a maelstrom of interest in and fear of the occult. The summer of 1969 became legendary, the sweltering time of the Manson murders, when failed musician Charles Manson led a group of devoted followers to viciously kill multiple people, including pregnant actor Sharon Tate, the wife of director Roman Polanski (who wasn't home at Cielo Drive at the time).

It was a memoir, not a textbook. No matter. The book lit the burning idea: Satanists were everywhere.

"The Satanic Bible" was published that same year by former organist Anton LaVey, who would go on to start The Church of Satan (he played the devil in Polanski's "Rosemary Baby"). Two years later, William Peter Blatty published "The Exorcist," the bestselling novel turned into a popular horror film in 1973.

After the Manson murders, America next lived in fear of the Zodiac Killer, the Alphabet Killer, John Wayne Gacy, Ted Bundy and the Son of Sam, who terrorized during another blisteringly hot summer.

Another memoir was published 8 years later. Lisa Bryn Rundle, host of the CBC podcast "Uncover: Satanic Panic," calls that book "Michelle Remembers," a now discredited memoir: "the spark that set off the hellfire." In the book, Michelle Smith recounted to her psychiatrist (and future husband) Lawrence Pazder the alleged horrific physical and sexual abuse she had endured as the victim of Satan-worshipping cultists.

Despite the outlandish claims, the book became a huge success, and Pazder became a sought-after expert on "ritual abuse," a term he made up. "Michelle Remembers" was so popular it was used as training material for social workers in a daycare abuse case in California.

Remember, it was a memoir, not a textbook. No matter. The book lit the burning idea: Satanists were everywhere. They were organized, underground and maybe in your community. They wanted your kids for sacrifices.

As Rundle says, "Much of what fueled the panic was not real, but these claims led to a wave of high-profile, criminal trials" as hundreds of people, primarily daycare workers, were accused of abusing children for . . . Satan reasons. Despite extensive investigations in the years since, there has never been any evidence of any conspiracy of any organized, Satanic groups who abuse children for rituals.

Pazder said there was no evidence because bodies would be eaten by Satanists to "leave no evidence around." Convenient!

But daycare employers were not the only targets of outraged parents who wanted the moral high ground. As so often happens, rock 'n roll got blamed too. Well, specifically heavy metal music.

His mother blamed the game.

As Janice Headley writes, "The Prince of Darkness has long been a shadowy presence in the music world." But "things really escalated in 1970 when Black Sabbath released their self-titled debut album, pioneering the "heavy metal" genre." KISS, Judas Priest (who had to defend themselves in court against Satanism accusations) and countless others followed.(Crucifictorious is a personal favorite.)

As the Satanic panic gathered momentum, politicians accused bands of hiding evil messages in tracks, particularly if you played them backward. Eddie of "Stranger Things" knows his way around a heavy metal tune or two; he plays in a band called Coroded Coffin after all (and he has the hair for it). 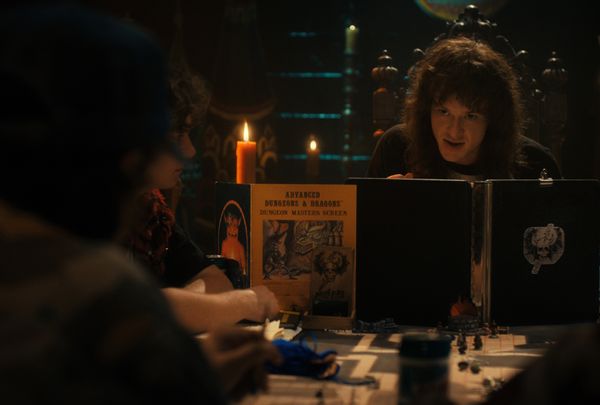 But Eddie also loves Dungeons & Dragons, and yes, that game specifically got roped into this mess too.

To be honest, it's hard to think of many games that are more pure. A fantasy tabletop role-playing game originally designed by Gary Gygax and Dave Arneson, Dungeons & Dragons was first published in 1974.

My family first played it in the early months of the pandemic. It was one of the few things that could take my child's mind off the encroaching horrors of the real world, instead focusing on bards and druids, wizards and rogues, and what snacks we would bring to our campaign. Snacks are very important. We played for hours. The voice of my partner, tasked with being the Dungeon Master, who leads the games, would grow hoarse long into the night.

But in 1979, a Michigan State University student who was only 16 ran away. He was believed to have gotten lost in the steam tunnels below the university, believed to be lost in a world of his own making, a fantasy, because he was a  D & D player. As Keith Roysdon writes in Crime Reads: "He went back home but left again and died of a self-inflicted gunshot wound a year after his initial disappearance."

His mother blamed the game.

Patricia A. Pulling founded a group called Bothered About Dungeons and Dragons, or BADD for short. Known as an anti-occult campaigner, she popularized the views of BADD: that D & D encouraged suicide and devil worship, via conservative Christian and mainstream media, and in 1984, became a director of the National Coalition on TV Violence. BADD fell apart upon her death in 1997.

But the moral panic of Satanism persists. The Season 4 storyline of "Stranger Things" recalls other events from real life, including a Dungeons & Dragon club that was targeted at a high school in Herber City, Utah. The tendrils of the panic, like vines from the Upside Down, keep growing, with echoes in conspiracy groups like QAnon. People fear what they don't understand, and many people don't understand imagination.

As Ander Monson writes, "The Dungeon Master makes the rules, knows all — or as much as is possible to know." People fear those who dream, who refuse to give up their creativity or love of fantasy and surrender to a magic-less world. It's no wonder Eddie of "Stranger Things" is a target, that Dustin and Lucas are mocked. Most dreamers are. 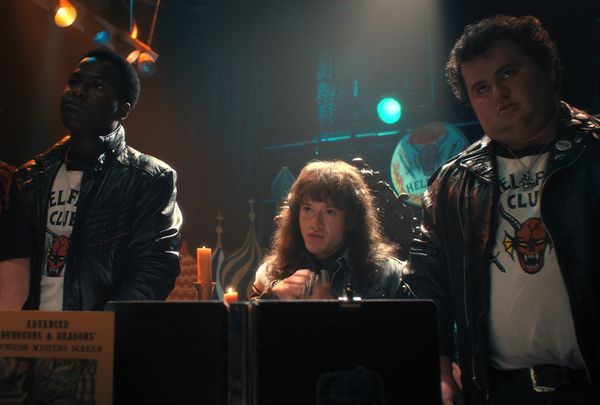