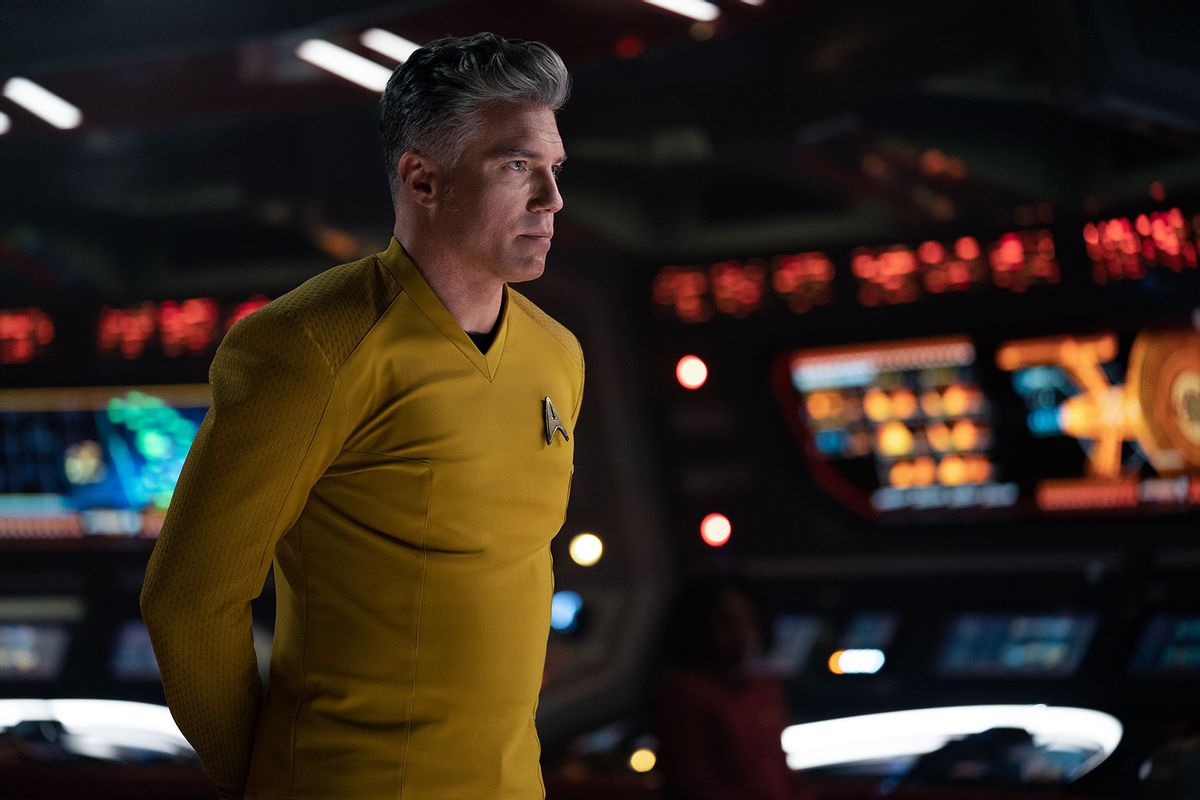 "Star Trek: Strange New Worlds" ends its first season with a hard look at unforeseen consequences, mainly those linked to the terrible fate of Christopher Pike (Anson Mount), Captain of the U.S.S. Enterprise NCC-1701. Those who recall the original "Star Trek" episode "The Menagerie, Part 1" know that the Starfleet commander's career is cut short by an accident that leaves him horrendously disfigured and on life support. He receives a glimpse at that destiny in a second season episode of "Discovery," and throughout "Strange New Worlds" that vision weighs heavily on his psyche.

Pike is the Starship captain Trekkies have been missing, and "Strange New Worlds" is a welcome return to the "Star Trek" they know and love.

On the other hand, the very same dire disclosure makes him a better leader, and an even richer character. Whether by the writers' design or through Mount's performance, Captain Pike has quickly risen in the ranks of favorite "Star Trek" captains for his singular joie de vivre. He's a stalwart officer, dedicated to its principle of service above all else. He's also a charmer, a blend of James T. Kirk's swagger and Jean-Luc Picard's refinement, who knows that home-cooked gourmet meals are the most effective tactic to lower shields.

Picard loved his "Earl Grey, hot" and his orders to "Engage" when it was time for the Enterprise to get down to business. Pike, in comparison, is all about sophisticated flavors and making luxury meals out of leftover spaghetti. When he urges the ship's helmsman Erica Ortegas (Melissa Navia) to launch with his signature "Hit it," it punches the command deck like a heady dusting of spice.

Pike is the Starship captain Trekkies have been missing, and "Strange New Worlds" is a welcome return to the "Star Trek" they know and love.

"Strange New Worlds," the fifth modern entry to the "Star Trek" TV universe, ends its first season in higher esteem among Trekkies than "Discovery"  and "Picard" for a galaxy of reasons besides the stellar charisma of the Enterprise's captain – pre-Kirk, we should say. (Although rounding out the fan service aspect of this introductory season is an appearance by a younger Kirk in the finale, "A Quality of Mercy," played by "Vampire Diaries" star Paul Wesley.)

But the fact that Mount's Pike personifies the traits that make this "Star Trek" series particularly binge-able can't be discounted. His Starfleet captain radiates empathy and a shimmering dedication to his crew. All that, and yes, it's tough to take your eyes off him.

It's not necessarily a matter of the actor's physical attractiveness I'm talking about either, although the rippling silver waves topping Mount's dome are as mesmerizing as any deep space nebula. Rather, it's his representation of the whole package: Pike's devotion to duty, his insistence on diplomacy, his assumption of the best in lifeforms than can be reasoned with, and creative outwitting of the ones that can't.

He is the Starship captain Trekkies have been missing, and "Strange New Worlds" is a welcome return to the "Star Trek" they know and love – the version originated by Gene Roddenberry and resurrected in the 1990s and early aughts by Ron Moore, Rick Berman Brannon Braga.

There are many reasons this is so, starting with the series's unabashed embrace of the type of classic short-form storytelling for which TV was made, a notion lost in an age of auteur producers describing their prestige attempts as "10-hour movies."

Through "Strange New Worlds," executive producers Akiva Goldsman, Alex Kurtzman, and Jenny Lumet remind us of the worth and propulsive benefit of one-and-done adventures, whether they revolve around action or negotiation, pure relationship establishment, or fairytale fantasy, simply for the joy of it.

"A Quality of Mercy" culminates this difficult meld of optimism and realism in a flash-forward, and a callback to the "Star Trek" episode "Balance of Terror," one among several this season: A future version of Pike, dressed in the red and white uniform of those 1980s "Star Trek" movies, visits his present self to warn him about altering the future, allowing him to leap forward in time to an event horizon that catapults the galaxy into war.

There, he finds out that his faith in the better angels of others is to blame.

The "others" in question are the Romulans, a culture about which, at this point in the timeline, little is known other than their deadly aggression. He trusts that this enemy wants to avoid war are much as the Federation does – after all, an endless war, by definition, can never be won.

But some beings know nothing else and press the fight, despite a decimating toll that resounds across generations. Finding out that making what he saw as the best, humane choice was the worst thing he could do in the face of killers moves Pike to reaffirm his journey toward the inevitable.

To those who wrote off "Discovery," a series that divided "Trek" purists from the jump, "Strange New Worlds" validates their view that the TV formula that made "Star Trek" great and established "canon" is best not tinkered with too greatly.

"Strange New Worlds" still presents a future worth hoping for ... albeit a fraught one.

While "Discovery" became more serialized and convoluted in later seasons, it also pushed the franchise in ways its fans weren't accustomed to.  Similarly I don't necessarily believe the overwhelming success of "Strange New Worlds" is indicative that this is the course the "Star Trek" universe should set for itself henceforth.

It is simply going boldly where we've already been, extending the pattern Gene Roddenberry established long ago, returning another enviable white guy to the captain's chair. Later rounds of "Discovery" and the second season of "Picard" may not have been as successful or thrilling as their first seasons, but falling back to what works is not the way to achieve creative evolution.

Nevertheless, I'd posit "Strange New Worlds" is giving Trekkies what they need in 2022, updating Roddenberry's meliorism with a bracing dose of realism, and serving it in a highly devourable form.

"Strange New Worlds" still presents a future worth hoping for.

This is said as someone who sat down with the series late in its run, watching most of it over two days instead of 10 weeks. I remain a proponent of weekly episode drops, let's be clear. But "Strange New Worlds" is an exception to this opinion. No episodic cliffhangers yank you from one episode to the next, yet the characters' season-long emotional arcs are engaging enough to make me want to see more of them, and more stories about them, immediately. I was glad that I didn't have to wait a week until my next hit.

It still presents a future with hoping for, albeit a fraught one set around seven years before the events of the original "Star Trek." Remember when we could picture a world in which mankind has evolved beyond racism, misogyny, and class warfare, dedicating itself to scientific exploration, cultural understanding, and the expansion of alliances instead of conquest? This inclusive, Enterprise crew is still living that speculative future.

A major departure from previous depictions of the ship's personnel is that his Enterprise crew is not emotionally hamstrung. Underneath Pike's suave confidence hums a fear of what's coming and the fact that his future coincides with the death of two young people in his charge. Uhura, introduced as a cadet (Celia Rose Gooding), is a linguistics prodigy bursting with wonder and curiosity, and hesitant to set down roots following the tragic deaths of her parents.

Peck's Spock, forged as a creation specific to the actor while still honoring Leonard Nimoy's original interpretation, allows his human side to roar forth as opposed to merely speaking about his inner conflict. And the crew's security officer La'an Noonien-Singh (Christina Chong) constructs her battle-ready outlook atop a foundation of trauma very few people in the universe have survived and therefore understand.

The unintended consequence of processing and understanding all these feelings, as we see, is the Federation's blind spot, created by a mistaken faith that the rest of the universe is on the same page when it comes to empathy. In some cases, that assumption is correct; Enterprise's chief medical officer Joseph M'Benga (Babs Olusanmokun) spends most of the episode searching for a cure for his daughter's terminal illness, only to discover a god-like consciousness who connects with her loneliness and offers her immortality.

This comes at the end of an episode reminiscent of holodeck adventures in "The Next Generation," diversionary escapes that seem real, even dangerous, but always return the adventurer to duty without impacting the central mission. Not every lighthearted departure from the A-plot in "Strange New Worlds" is overtly fantastic, either. One of the season's best character-developing escapades involves Number One and Noonien-Singh playing Enterprise Bingo, strictly out of curiosity.

This bring levity to the political and social strife made metaphor in various "Star Trek" excursions, although in prior series the Enterprise crew observe cultures and their schisms with some remove, calling upon its captains and first officers to play referee in conflicts.

"Discovery" is even more brazen with this, positioning its first season Klingons as thinly disguised versions of MAGA zealots. But this Enterprise's crew reflects a strain of America's wavering self-image, encountering several situations that poke holes in the Federation's identity as a paragon of understanding and wisdom. An early-season encounter with a comet on a collision course with a planet puts the Enterprise in conflict with an alien race dedicated to preventing anyone from altering its path, creating a clash between a foreign faith and Pike's view of moral rectitude.

The Enterprise makes what it deems to be the heroic choice only to discover how wrong they were in their assumptions about the situation. There are several such plots in this season, where Pike trusts his view of what's right – and, from a protagonist-favoring point of view, takes the "correct" actions – only to realize too late the grave error of his supposition.

"Causality is complex," future Pike tells his present self in "A Quality of Mercy," explaining that the only way for him to understand the ramifications of his actions is for him to live through them. This is a striking close to a season that kicks off with Pike calling up images of World War III which, he says, decimated Earth in the 21st century.

He shares that archival footage with a politically riven culture teetering on the verge of planetary war, and the episode hints that this provides enough warning to inspire them to negotiate their way toward peace. There's something uplifting in that message and every one-off adventure that follows, alongside Pike's own journey of acceptance.

"Strange New Worlds" landed in a real world whose timeline has turned regressive and hostile toward discovery, evolution, and science itself, and offers a reminder of a mission that is both noble and feels more distant than ever. "We seek out new life and new civilizations," Pike tells his crew. "We boldly go where no one has gone before."

That also means flying toward a terrible future – for Pike, and possibly for those of us watching him. But there's a lesson in the Enterprise crew's navigation of its purpose, episode by episode. Despite the roughness ahead, it still envisions brighter possibilities in the distance, along with many opportunities to live adventurously along the way.

All episode of "Star Trek: Strange New Worlds" are streaming on Paramount+.