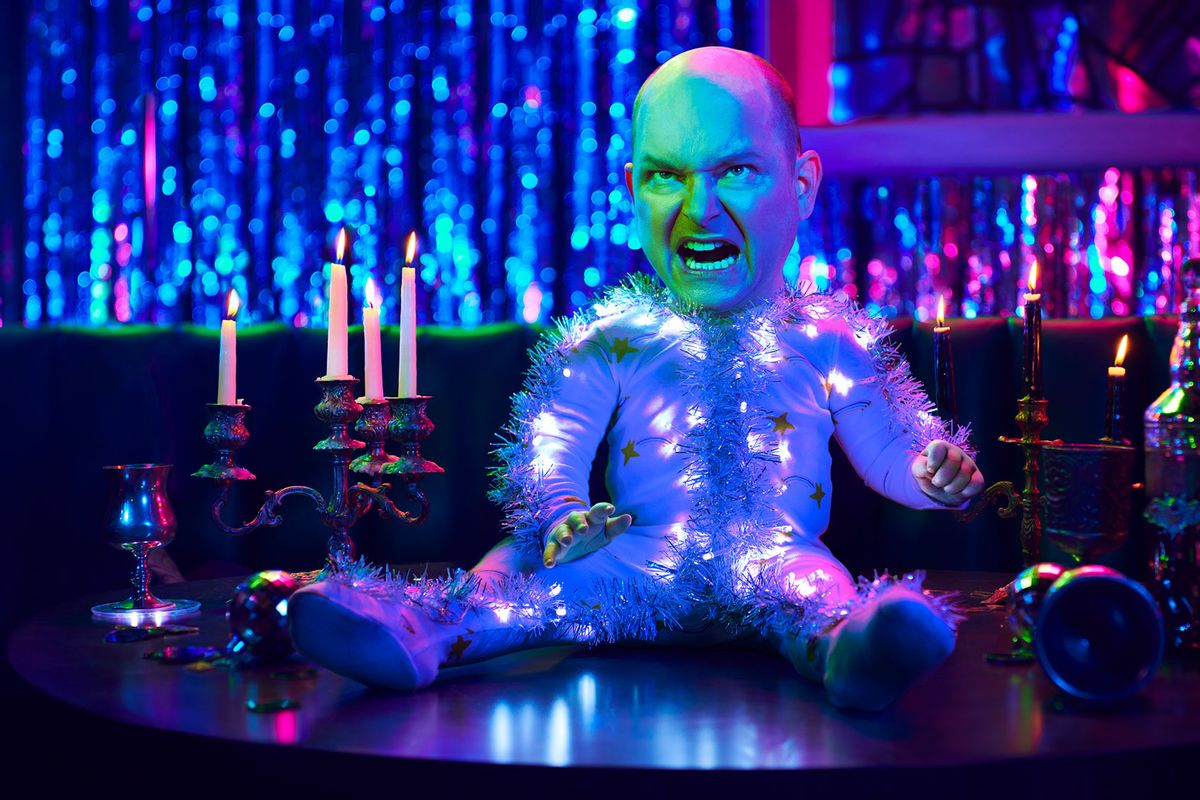 "What We Do in the Shadows" resumes with the reminder that some people simply should not be parents. This is especially true of people who see infants not as gifts but responsibilities, not as a boon to their days, but a drain on their life force.

Society overwhelmingly judges those wise and lucky enough to know that about themselves for deciding not to have children. Nadja of Antipaxos (Natasia Demetriou) got over caring about what other people think of her hundreds of years ago. Her ambition keeps a spark alive in her undead heart, along with her lust for her husband Laszlo Cravensworth (Matt Berry). Still, when last we saw Nadja, she and Laszlo had parted ways, with her heading to London to accept a position with the Supreme Worldwide Vampiric Council.

In the fourth season premiere, she returns unexpectedly early to a house expectedly full, mainly of raccoons, trash, gaseous fumes, standing water . . . and the toddler that burst from the corpse of their late roomie Colin Robinson (Mark Proksch).

On another show, Nadja's nurturing impulses might kick in, moving her to rise to the unexpected challenge of looking after whatever the heck this tiny creature can be called.

But Nadja's driving instincts are tied to bloodlust, partying, and stacking dollar bills. She ignores the baby Not-Quite-Colin-Robinson and declares that the Staten Island coven is transforming their local Vampire Council headquarters into a nightclub. 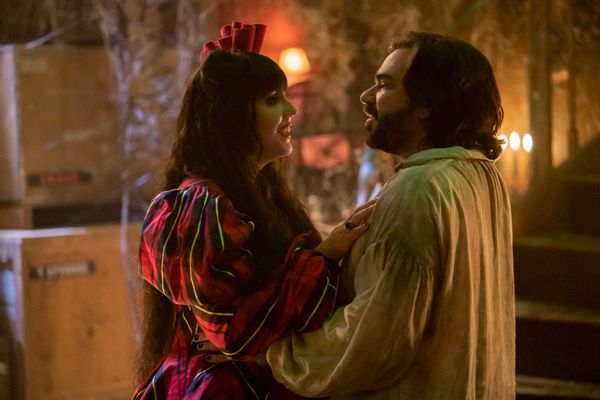 Instead, it's Laszlo who has sacrificed his time and energy toward raising the unhappy accident his dead roommate foisted upon him, determined to prevent whatever "the lad" grows into from being an energy siphoning bore.

"What We Do in the Shadows" exists outside of time and the politics of any given moment despite being set in the modern age.

He's committed to being the unholy child's custodian, at least until Guillermo (Harvey Guillen) rejoins the house and notices the extent of Laszlo's parental neglect. The running joke of Guillermo is that he's a self-sacrificing martyr in a madhouse: "I just can leave that innocent kid in this death trap of a house with those lunatics," he hisses, vowing to look after himself . . . after he plans a wedding for Nandor (Kayvan Novak) and makes sure the child doesn't die.

"What We Do in the Shadows" exists outside of time and the politics of any given moment despite being set in the modern age. This is simply to confirm that nothing about the unexpected rebirth of Proksch's deathly boring energy vampire is designed to comment on anything that happens to be going on in the world at the moment.

Besides, Colin Robinson's slimy, mewling inner child made his debut last fall, long before the horror show of the post-Roe v. Wade era set about showing us just how heartless those who supposedly cherish life can be.

But if baby Colin's presence right now serves any broader if coincidental purpose, perhaps it is to validate the realistic demands of childrearing, and the unsuitability of some people to undertake it. Instead of viewing parenthood through the sinister lens of biological and authoritarian imperative, Laszlo sees it as a duty, which is noble, and a science project, which is as far from altruistic as one gets.

Colin Spawn's accelerated growth rate – he's the size of a 3-year-old a year after popping out – has upended the coven. He interrupts Laszlo's hunting, shoots nails into his body, and sticks metal hangers into electrical outlets. Nandor, having returned from his version of an "eat, pray, love" tour where he tagged along with a Wisconsin family, wants little to nothing to do with him, setting his sights on getting married to a spouse he hasn't met yet.

Once Nandor transforms the place into a rundown version of "The Bachelor" mansion by resurrecting his 37 wives from his days as a conqueror, not a one desires the company of the littlest housemate. "Can you take this infant away from me?" one asks Guillermo. "He is exhausting me." 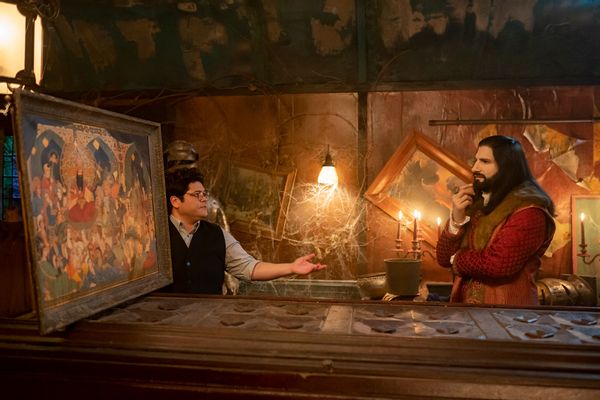 By stepping up to play parental roles, Laszlo and Guillermo join a wave of surrogate father figures doing something similar throughout TV and film.

On "Obi-Wan Kenobi" the title character's redemptive guardianship of Leia Organa is one example. Charles Haden-Savage's bond with his ex-girlfiend's daughter Lucy on "Only Murders in the Building" is another. We also saw it on "Hawkeye" via Clint Barton's surrogate parenting of Hailee Steinfeld's Kate Bishop, in addition to caring for his biological children. Then the magician-physician became protective of a portal-making teen in "Doctor Strange in the Multiverse of Madness"; and in "Thor: Love and Thunder" through the title character's wholehearted acceptance of playing dad to a kid who sprang forth from a wish (played by Chris Hemsworth's actual daughter India Rose).

"What We Do in the Shadows" has always provided a refuge in the worst of times in ways unlike any other series on TV. It could be interpreted as forward-thinking and heartening, given how reflexively pop culture assigns caretaking roles to female characters.

In each of these shows, the bond between these grown men and kids to which they're biologically disconnected is wholesome and revitalizing, a sheer delight. And it's heartening to see these varied, unrelated models of the ways that adults, and men specifically, can assist in raising the children in their midst without anyone viewing their contributions as emasculating or unseemly.

"Shadows," however, acknowledges how taxing rearing a baby you didn't plan for can be.

Our reality leaves no room for joking about the assault on reproductive choice and bodily autonomy, let's be clear – especially after witnessing the first in what is sure to be a cascade of examples of the evil extremes to which anti-abortion architects are willing to go. But "What We Do in the Shadows" has always provided a refuge in the worst of times in ways unlike any other series on TV.

At the start of the pandemic, it helped clear the fog of our collective anxiety. During this scary summer, it offers escapist visits to a gothic family of choice that does whatever they want, frequently attempts to make the right choice, and often screws up in the process. Colin Robinson's pint-sized sequel could do much worse than having Guillermo keeping him from getting hurt, and counting on Laszlo's affection to keep him going.

But this is one place where a woman isn't being pushed into raising a kid she didn't plan for because the men she lives with decide that's what she was put on this Earth to do.

"What We Do in the Shadows" airs new episodes 10 p.m. Tuesdays on FX and the next day on Hulu.

about vampires and powerful kids

Commentary Fathers Fx Tv What We Do In The Shadows