Ravi Kapoor on his comedy "Four Samosas": "I always wanted to make a lo-fi heist movie" 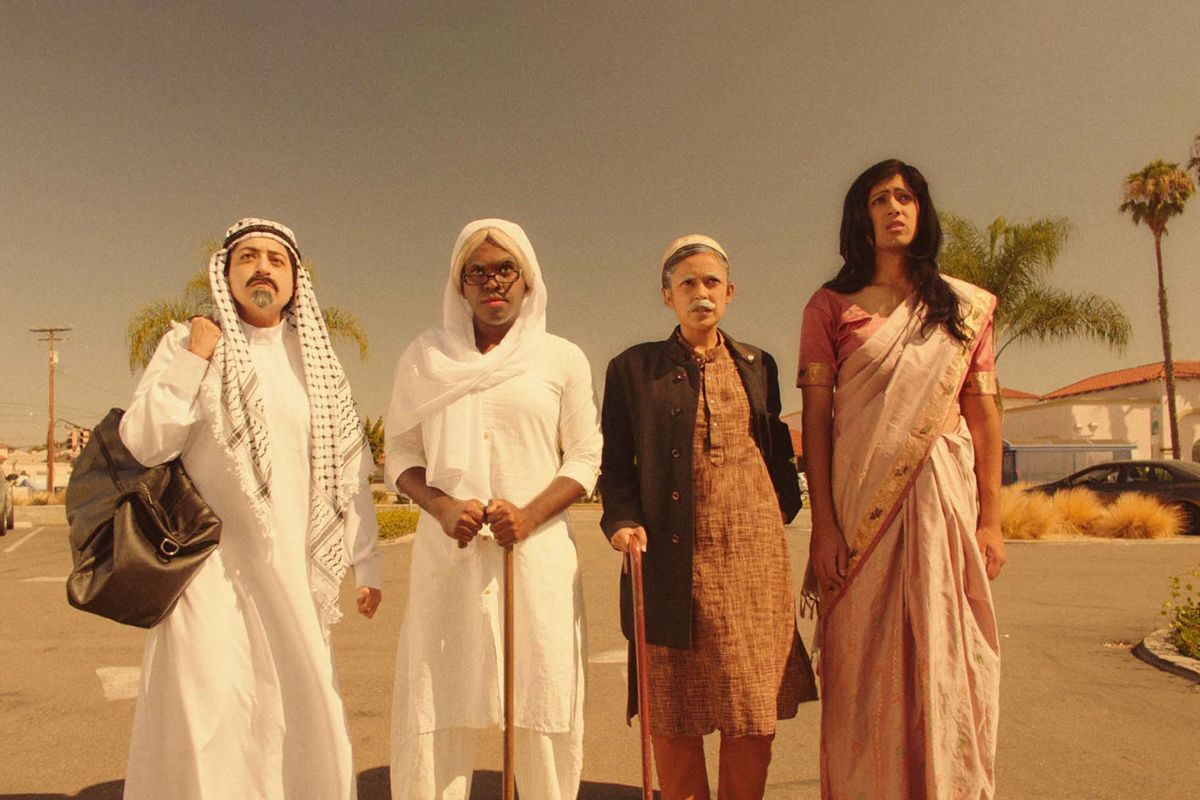 Ravi Kapoor's "Four Samosas" is an amusing heist comedy set in Artesia, California, (aka Little India) about Vinny (Venk Potula) a would-be rapper still dejected from his girlfriend Rina (Summer Bishil of "The Magicians"), breaking up with him three years ago. When he learns that Rina is now engaged to Sanjay (Karan Soni), Vinny hatches a plan to rob Rina's father, Mr. Juneja (Tony Mirrcandani), of the possibly dirty diamonds he keeps in a safe in the grocery store he owns.

To achieve his goal, Vinny enlists the assistance of his Bollywood-loving friend Zak (Nirvan Patnaik), Anjali (Sharmita Bhattacharya), the editor and publisher of "The Great Little Indian Times," and Paru (the scene-stealing Sonal Shah), an undocumented student. Trouble, and comedy, of course, ensue as the four inexperienced thieves try to execute their plan.

"Four Samosas" features plenty of witty sight gags, wordplay, and a few Bollywood numbers, all of which are diverting. But the film also has some pointed comments on cultural assimilation and shame as the characters try to find their place in the world.

How did you conceive of the story, characters and personalities in "Four Samosas"?

I was interested in two things. I always wanted to do a story set in Artesia, the Little India of Los Angeles, a place that fascinated me. It's a very specific Little India, it's not like Queens or Jackson Heights in New York, because It's not as bustling — because of the heat of Southern California. Everything takes place inside the restaurants and sari stores. What fascinates me about Little Indias is that they are like little principalities in some ways, like a motherland or a homeland. I didn't grow up in India; I have only visited it a handful of times. But going to a Little India in whatever city I'm in, it was a way to tap into that homeland that I never knew. That was one driving force.

The other was I always wanted to make a lo-fi heist movie. No guns, car chases or high-tech gadgets. It's just about the people. And any heist story is a relationship movie. It's about people coming together and discovering their commonalities and differences and how this event brings the together or drives them apart. It usually drives them apart after the heist. The usual conceit of the heist movie is how after something is achieved, the real issues can come to the fore.

The characters have one foot in the old world, and one foot in the new world. There are ideas about cultural shame and identity. What points do you want to make about Indian American culture?

What's interesting to me is that it's not a heavy thing — this idea of living in two cultures. In the past, we have had to examine how English are we or how American, or Indian, or how South Asian are we, and the conflict that brings up in our families and the expectations for second generation immigrants. In some ways, it's just accepted now, it's kind of lived in, this idea of living in two worlds. Even though there are characters in the film who want to create a new South Asian state, this idea of identity isn't such a heavy issue in the film. It's not as heavy an issue as it used to be. It's just an acceptance. I'm American and culturally I have some South Asian in me as well. I hope the film shows how easy it is in some ways to be both American and South Asian, be a Desi at the same time. It's a new world and a new culture.

I see it as code-switching. You can play whatever identity you want when it suits you. I like that Vinny is a rapper, but is he appropriating another culture?

It's all out there in the cultures we're absorbing and taking in, being here in America. All of it is part of who we are now. Rap and hip-hop is such a massive part of second and third generation South Asian's sense of being. There are aspects they can tap into and feel it speaks to them, just like a white audience as well as a Black audience. That Vinny is a rapper who works in a sari store – you think that is a dichotomy that can't exist, but they seamlessly exist. He tests out his rhymes while he's selling his saris. 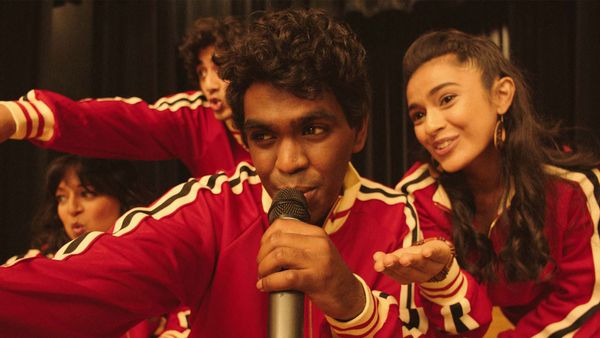 There is some interesting discussion about reappropriating wealth. Can you discuss the class aspect of "Four Samosas?"

That's a really good point. Often, when we look at South Asian immigration in America, there is a predominant class which is very affluent and educated whereas in the UK, the majority of the immigration was more blue-collar and working-class. But there is a group of South Asian immigration that isn't part of the affluent, and they do become an outside group to some degree. All these characters in "Four Samosas" are living on the fringe in one way or another. They are not wealthy. Vinny almost lives out of his garage with his mother. His father abandoned wanting any sense of economic gain and instead reaches for a spiritual heaven.

And then we have characters like Paru, who is waiting on a green card and feels stuck and left behind by people in the IT world, or Zak who works in a restaurant. The characters live more in a working-class, blue-collar segment of the South Asian community. What is interesting in the storytelling of the South Asian experience, often there is an emphasis is in middle class, and the working-class experience doesn't get seen.

I also loved the various comedic elements, from the sight gags of Vinny's shirts. Can you talk about developing the humor?

The concept of the shirt was that these are his middle school basketball jerseys. He has never really grown out of, physically, spiritually, or mentally. He is stuck in the past. The highlight of his life was back in middle school. He hasn't evolved. He's a bit of a man-child.

You shot "Four Samosas" in 1:33 aspect ratio. What informed that decision and how did you conceive of the film visually?

We wanted to create something specific visually, and when you don't have a lot of money you don't want to pretend you have a lot of money. You don't want to compete with a studio movie unless you have a studio budget. So, for us it was about leaning into lo-fi and with a low budget. We did that visually by shooting in 4:3 aspect ratio and with the curved corners it gave it a retro feel. Typically, with a heist movie when you have plenty of characters you go with a widescreen format to fit all the characters in and given them space. I was fascinating by the idea of squeezing in these people and what would that do? It gives it a clown quality — how many people can fit in a phone box or a tiny car? We shot everything on one lens except for the two fantasy scenes. We wanted push and define the visual style. I'm also a massive fan of Buster Keaton as well and so there is a callback to silent shorts and the slapstick humor with wide shots. We really wanted to find a way to heighten this film and make it feel like it exists not quite in the real world, but existing in a parallel Little India on a slightly different planet.

Vinny, who is a slacker, tries to get talked out of the heist by his father, and they discuss the idea of fulfilling a destiny, having clarity and devotion. What are your thoughts on human behavior?

What I love about the father is that you have an absent father who is not physically absent, he's around, but he is emotionally absent because he's exploring his spirituality. He has gone on a deep dive for religion and God. He's there, but not really there for his son. He is looking at the bigger picture but missing the smaller minutia of raising a kid. It explains Vinny's lack of motivation. He decides to do the heist more out of the fact that he's struggling with his sense of self-esteem and lack of belief in himself and lack of self-worth. That is caused by the fact that his father abandoned him and the woman he thinks he's in love with has rejected him and artistically that he doesn't know where he is at. He knows he has something to say, he doesn't know how to say it. Vinny discovers a new way of expressing himself artistically.

There was a concern that Jo Koy's "Easter Sunday" underperformed at the box office. Is there a concern about that with "Four Samosas"?

In terms of whatever happens with the film, we've already won. It exceeded our own expectations already to some degrees. I wanted to make the film I want to see, and not worry about what anyone else might like, or dislike, or gravitate towards or not. That we did that, and we are getting a release through IFC and limited theatrical I feel we are the winning side of the equation. In term of the audience, I think is that it's so quirky and has a strong indie vibe to it, I think it will go beyond the South Asian audience and attract a general audience that love independent films. If they discover it, I don't think there are barriers to them enjoying it. It will even enhance the viewing experience because it will be a little different and yet familiar.

"Four Samosas" is about finding your voice, and your crew, getting a life and inspiring others. You seem to have a voice and crew. How do you get inspiration?

It is about finding people who are prepared to come along with you on a journey. It's a powerful thing. Making a movie is not unlike pulling off a heist. You find people who want to take the journey with you that probably and possibly will end in failure, but you never know? You might succeed and get the diamonds and make a film that people will want to see. I love that idea of how a project can galvanize people.

There is a lot of performance in the film — there is a drama group, Vinny is a rapper, Zak wants to be a Bollywood star. So, the film is also about how performance can save us on a spiritual level. How, if other things in our lives are not coalescing, whether it is financial or romantic, the very act of expression through art can give us a sense of value for just being alive. That is a big thing for me as well.