"Strange World" is a box office flop, but not for the reasons the right is claiming

The far right is blaming the inclusion of a gay son for its failure. Of course that isn't why, but there are others 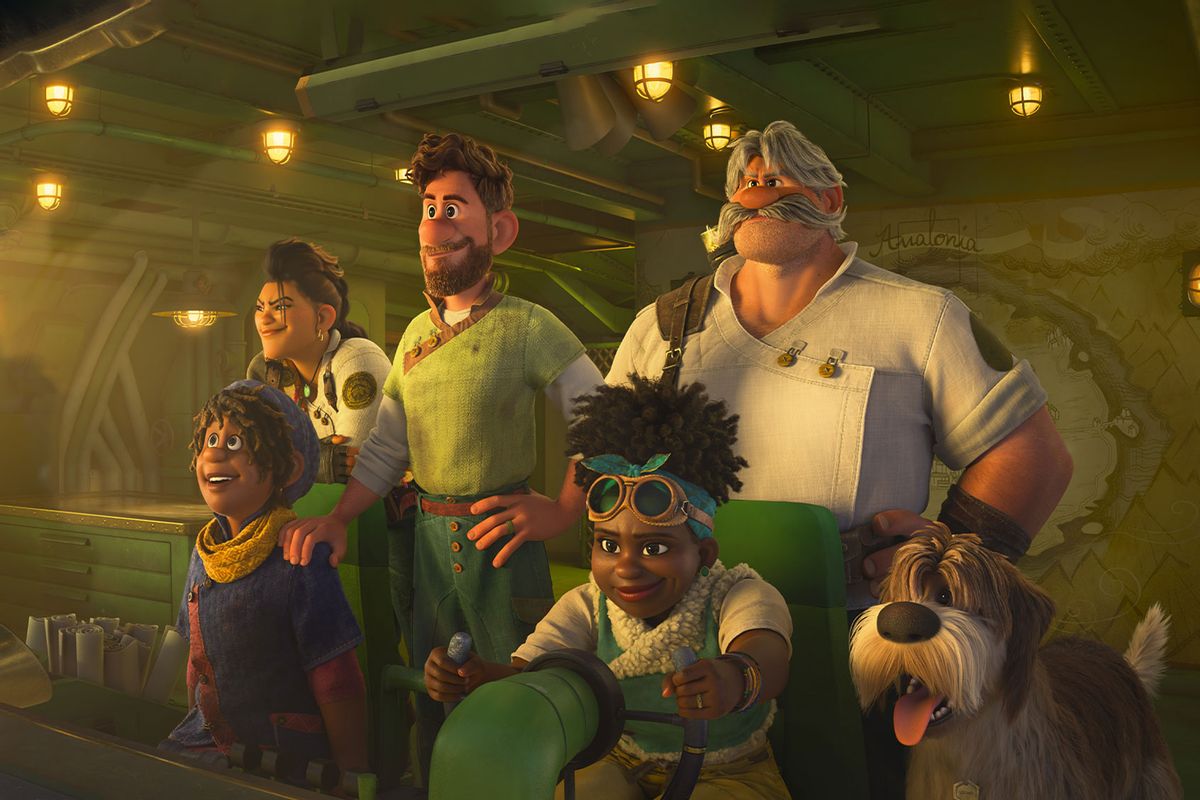 Walt Disney Animation Studios' "Strange World" tells the story of three generations of Clade men, starting with brash adventurer Jaeger Clade (Dennis Quaid) who drags his son Searcher (Jake Gyllenhaal) along on his expeditions. Jaeger is a celebrated hero dedicated to a lifelong quest to be the first to pass over the mountain range that has kept their homeland, Avalonia, isolated from the rest of the world.

Searcher is more concerned with the natural wonders in their backyard, including an electricity-generating plant they encounter on their arduous trek through the mountains. Searcher believes the plant is enough of a discovery, declaring he wants to go return home to study it. The stubborn father abandons his son instead.

Flashing forward 25 years, we see that Searcher has cultivated the plant's incandescent grape-like fruit into an energy resource called pando, transforming Avalonia from a horse-and-buggy backwater into a utopia of flying cars and technological innovation. He's also a father to a teenage son, Ethan (Jaboukie Young-White), who shockingly enough, does not want to follow in Searcher's footsteps.  This worries Searcher, especially since Ethan shows signs of having more in common with Jaeger.

When Avalonia's president Callisto Mal (Lucy Liu) alerts Searcher to a mysterious affliction that's killing pando crops and enlists him to join a team on a journey into the Earth to figure out what's happening to the plant's root system, his fears are realized. Ethan tags along as a stowaway along with their dog, Legend. In pursuing Ethan, Searcher's wife Meridian (Gabrielle Union) also gets dragged along, which is a good thing since she's a pilot, and the ship they're flying eventually requires her skills.

Anyway, that's the gist of Disney's latest animated release, which, as you may have heard, had a stunningly poor box office showing across Thanksgiving weekend. The trailer contains no hints about its plot, or any other defining descriptions about those characters, which may not matter since odds are most people never saw it.

"Strange World" is predicted to go down as one of Disney's biggest-ever financial failures, with its losses projected to be in the $100 million-plus range. Right-wing culture war spectators are hooting with pleasure at what they see as evidence of diversity and inclusion efforts ruining Hollywood, specifically blaming director Don Hall and his co-director and screenwriter Qui Nguyen's choice to make Ethan gay.

This probably doesn't need to be said, but these claims have little basis in the reality of why "Strange World" tanked, other than the easily observable fact that the studio did the bare minimum to promote it.

Most people probably never saw the trailer for "Strange World."

What little advertising it did featured the gorgeous animation and little else. In a pandemic age dominated by vast streaming options and shorter exclusivity windows between theatrical releases and video-on-demand debuts, that is not enough to lure people to their local multiplexes. But as a thought experiment, let's say the preview marketing provided specific information about "Strange World." It probably would've faced an uphill battle anyway, and for reasons having nothing to do with the characters' complexions or sexual orientation.

Here are a few educated guesses as to why that is.

With entertainment corporations mining existing I.P. to their dregs, audiences can be sold more easily on sequels to movies they already know and love than taking a chance on unknown stories. This is especially true of Thanksgiving releases.

The last original Disney titles to make a substantial mark over that valuable five-day holiday gateway period were "Moana" in 2016 and Pixar's "Coco" in 2017. Each were successes, but their worldwide take was dwarfed by the Thanksgiving weekend earnings of "Frozen II," which hit $123.7 million. The sequel would go on to rake in $1.45 billion at the global box office.

Even last year's award-season darling "Encanto" had a relatively wan Thanksgiving opening weekend gross of $40 million, blamed in part on Disney's decision to make it available to its streaming service subscribers a month after it hit theaters. That said, it still went on to make $256 million in worldwide ticket sales, owing much of its success to its appeal to markets across the Spanish-speaking diaspora.

The homophobic Disney haters are going to hate it regardless of what it does.

"Strange World" is an ode to 1930s pulp comics and the stories of Jules Verne and Robert Louis Stevenson whose stories have been adapted before in classic Disney live-action movies. But the mediocre box office performance of the Verne-inspired "Atlantis: The Lost Empire" in 2001 resulted in a planned TV spinoff and a theme park ride being nixed.

That was nothing compared to Disney's 2002 animated space-age update of Stevenson's "Treasure Island," "Treasure Planet" which became the most expensive flop of its time.  Hey, do you remember 2011's "Mars Needs Moms"? No? That's why it grossed $39 million against a budget of $150 million.

Granted, not every successful Disney film relies on catchy scores and Broadway-style compositions, but even if you've never seen "Encanto," you know that we don't talk about Bruno. Everybody knows that.

A catchy song can turn a mediocre movie into a repeat player in homes with young children; "Encanto," thankfully, happens to be an excellent movie blessed with an addictive soundtrack, and a tune that became a phenomenon.

"We Don't Talk About Bruno" is the latest in a long line of catchy soundtrack singles that generate publicity for their movies separate from the feature. Without such a draw, a movie is left to count on the appeal of its main characters, either in the form of what they symbolize or how they look in the trailer or on a poster.

There have been successful Disney animated movies about male characters, "Wreck-It Ralph" being a robust recent example. Hall helmed another: 2014's "Big Hero 6."

Overall, though, Disney will now and forever be a princess-centric brand, whether that's interpreted as fairy tale royalty or a warrior like Raya from "Raya and the Last Dragon," whose screenplay Nguyen wrote). Either way, that figure becomes the face of the movie, lighting up the pester power of every kid who glimpses them.

"Strange World," in contrast, lacks such a magnet in its ensemble because . . . there isn't one. While there's nothing unattractive about the Clades – the story doesn't designate any as a hero figure or comedic core around which an ad campaign can be built.

Not every Disney classic features some adorable figure drawn for the dual purpose of being the main character's adorable friend and as a model for plush toy manufacturers, but it's no accident that all the biggest ones do. And despite the eye-popping color palette and psychedelic rendering of its subterranean plateaus and horizons, one drawback of the "Strange World" premise is that none of the "beasties" are huggable. Ethan would claim otherwise since he befriends an amoeba-like being he nicknames Splat. "I want to merchandise this!" a character coos upon seeing it for the first time, as if to subconsciously give us the impression that its shapeshifting, squeaking form is cute. But it is tough to imagine any parent clamoring to have their kid cuddle up to such a thing since Splat resembles a love stain.

"Strange World" is a middling movie

And that's the biggest disappointment. To be honest, if one were to fully describe the Clades and Avalonia, it would sound like the walk-up to a terrible joke someone's Fox News-addicted uncle revs up at the holiday table: "An interracial couple, their biracial gay son and their three-legged dog drive their vegan-fueled vehicle into a subterranean cave . . ."

These are merely the cosmetics of a story that means well but is narratively flaccid. Hall and Nguyen deserve credit for conceptualizing an environmental tale with a twist, one that makes a statement about our overreliance on fossil fuels while resisting the urge to insert a two-dimensional antagonist in the name of manufacturing conflict.

But instead of employing that classic story casting, the film's only tension is an outgrowth of the intergenerational bickering between Jaeger, the story's Boomer representation; Searcher, the crunchy Gen Xer, and Ethan, the Gen Z voice who simply wants to be left in peace.

Surely adults can relate to this insofar as it's a fictional representation of the very family dynamics that we try to escape by going to the movies. This forgets that tales like this are mainly made to thrill children; if adults also love them, that's a bonus.

Despite what the far right may claim, the percentage of people who would be offended by a queer cartoon of color starring in a story with a multi-ethnic cast is lower than the number of people who aren't. But if one chooses to be upset by anything, maybe it should be that Ethan and his crush Diazo weren't introduced in a stronger story. The homophobic Disney haters are going to hate it regardless of what it does. Knowing this, it's a shame that Disney didn't ever try to advertise this trip for the rest of us, let alone make it irrefutably worth the price of admission.