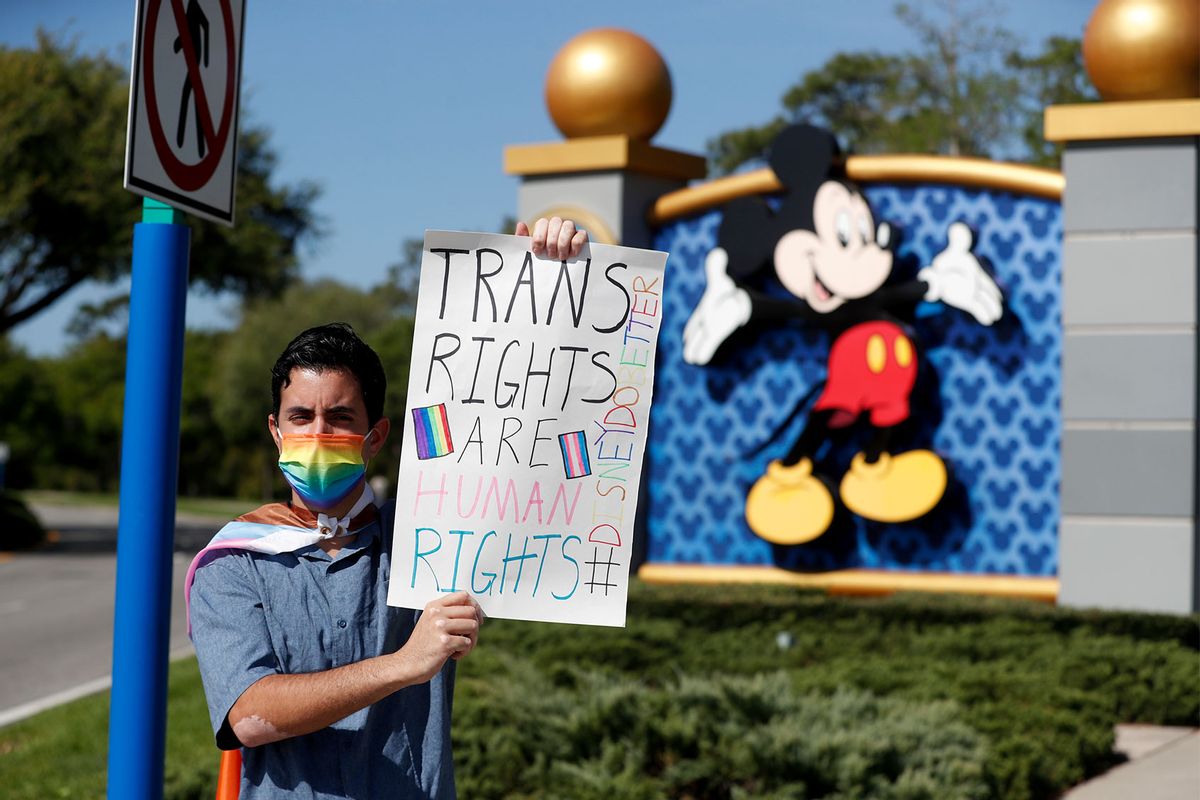 The GOP's choice to make QAnon-style hysterics the centerpiece of their 2022 midterm strategy is most heavily hurting LGBTQ Americans.

From Fox News to the Senate Judiciary Committee, Republicans are embracing rhetoric that insinuates — and sometimes outright declares — that there's a widespread conspiracy of Democrats, school teachers, liberal judges and Disney employees to "groom" children for sexual abuse. The primary victims of these lies are LGBTQ people, who are facing a renewed effort to roll back hard-won rights, all under the guise of "saving" children from imaginary "predators."  Across the country, Republican state legislatures are passing bills and using executive orders to make life hell for LGBTQ kids by denying them medical care, forcing them to remain closeted at school, excluding them from extracurricular activities, and even taking them away from loving parents. All of this damage is done in the name of "saving" children.

One of the surest signs that this is a Satanic panic-style frenzy is how downright weird the situation is getting, with right-wingers whipping themselves up with urban legends and lurid fantasies.

Have you heard that schools are putting litter boxes in the bathrooms to indulge students who "identify" as cats? If not, well, if you're on Facebook, you will soon enough. Earlier this week, Nebraska state Sen. Bruce Bostelman went off during a recent legislative session about how kids "meow and they bark " and "now schools are wanting to put litter boxes in the schools."

A floor speech from Nebraska State Senator Bruce Bostelman that "is about something called furries."

Needless to say, none of this is true.

The video went viral because Bostelman, who is (no shock here) a Republican, speaks in tones of high dudgeon that really adds a campy flair to all this talk about litter boxes. So viral, in fact, that Bostelman got embarrassed and backed off his ridiculous story. But if he had actually cared about whether this was true, he would have bothered to do a quick Google search before his epic rant. There are plenty of news reports about schools across the country having to debunk this urban legend due to its rapid spread.

But Bostelman repeated this urban legend for the same reason it's spreading on Facebook, despite all the earnest attempts from news organizations and school boards to shut it down: Right-wingers find it a useful lie to wield against LGBTQ kids — and trans kids in particular.

It's easy to see how such a bizarre tale is connected to Tucker Carlson of Fox News claiming, falsely, that "the trans thing" didn't exist "say, four years ago." The idea here is that no one is "really" trans and that it's a trend being "put" into people's heads. The next step, the suggestion goes, is people imagining they are cats and dogs.

The entire GOP assault on LGBTQ rights depends heavily on this tendency of right-wingers to value urban legends and lurid myths over concrete, reality-based information. This was evident when this entire moral panic over trans kids started, which was fueled by urban legends of men pretending to be trans so they could lurk in bathrooms and rape women. (Real sexual predators don't bother with such theatrics. They tend to be like Donald Trump, who recommended just "grab them by the pussy".) And now the new thing is an elaborate and headache-inducing conspiracy theory accusing Disney — yes, that Disney — of being behind a plot to funnel children into the arms of pedophiles.

As Michelle Goldberg at the New York Times notes, the thin gruel they're basing this conspiracy theory on is a tape of a Disney executive, in a meeting, highlighting extremely family-friendly fare she's produced that just happens to have a gay teenage character and a family with two dads at the helm. From this, Fox News has run a dizzying number of segments accusing the company of "sexualizing children" and creating "propaganda for grooming." This is unhinged QAnon stuff, designed to give credence to the conspiracy theories of the growing right-wing cult that believes Democrats run a secret conspiracy of blood-drinking pedophiles.

It's genuinely hard not to laugh at these people who have been so consumed by paranoid fantasies that they're talking about litter boxes and Disney being a secret pedophile organization. Unfortunately, all this is being used to justify very real violence against LGBTQ people, as well as state-sanctioned child abuse.

In Idaho, an anti-trans bill signed by the governor in 2020 would require female students who want to be on sports teams to "prove" their gender by submitting to a genital exam or getting an expensive hormonal or DNA test. In Mississippi, a Republican candidate for governor tweeted that "those who want to groom our children and pretend men are women" should be executed by "firing squad." ("Groomer" has become an all-purpose slur on the right to demonize anyone who supports LGBTQ rights, a category that now includes about 70% of Americans.) This week, Turning Point USA president Charlie Kirk called on men to "show up to the sporting event" and physically intervene to stop trans women from playing. Georgia Republican Rep. Marjorie Taylor Greene bragged on Alex Jones's show that her husband would commit criminal assault against trans and non-binary people who worked at a summer camp "that I paid money to send my child to." She later expanded the aperture of people she feels deserve such violent assault to cis gay men. At a recent Donald Trump rally, she implied that Transportation Secretary Pete Buttigieg and his husband lurk in women's rooms to sexually assault women.

"This is being used to justify very real violence against LGBTQ people, as well as state-sanctioned child abuse. "

Voltaire is often quoted (perhaps wrongly?) as saying that," Anyone who can make you believe absurdities can make you commit atrocities." Whatever the vintage of that quote, however, it echoes through our culture for a reason: It's absolutely true.

Whatever the political motives driving this, what we're witnessing is right-wingers whipping themselves up with false stories about pedophiles, rapists in bathrooms, and, uh litter boxes. They then use claims as justification for both state-based oppression of LGBTQ people and physical violence against them. To make it all worse, the people targeted are mostly children and teens. Going after children is pure laziness and cowardice on the GOP's part, of course. Kids don't have a lot of power, making them easy targets. To do all this under the guise of "saving children" is, once again, pure right-wing projection. As usual, the predators are pretending to be the prey.