In defense of (sometimes) mixing soda and milk

Beyond Pepsi's "Pilk" stunt, there's a world of delicate French and refreshing Doodh sodas waiting for you 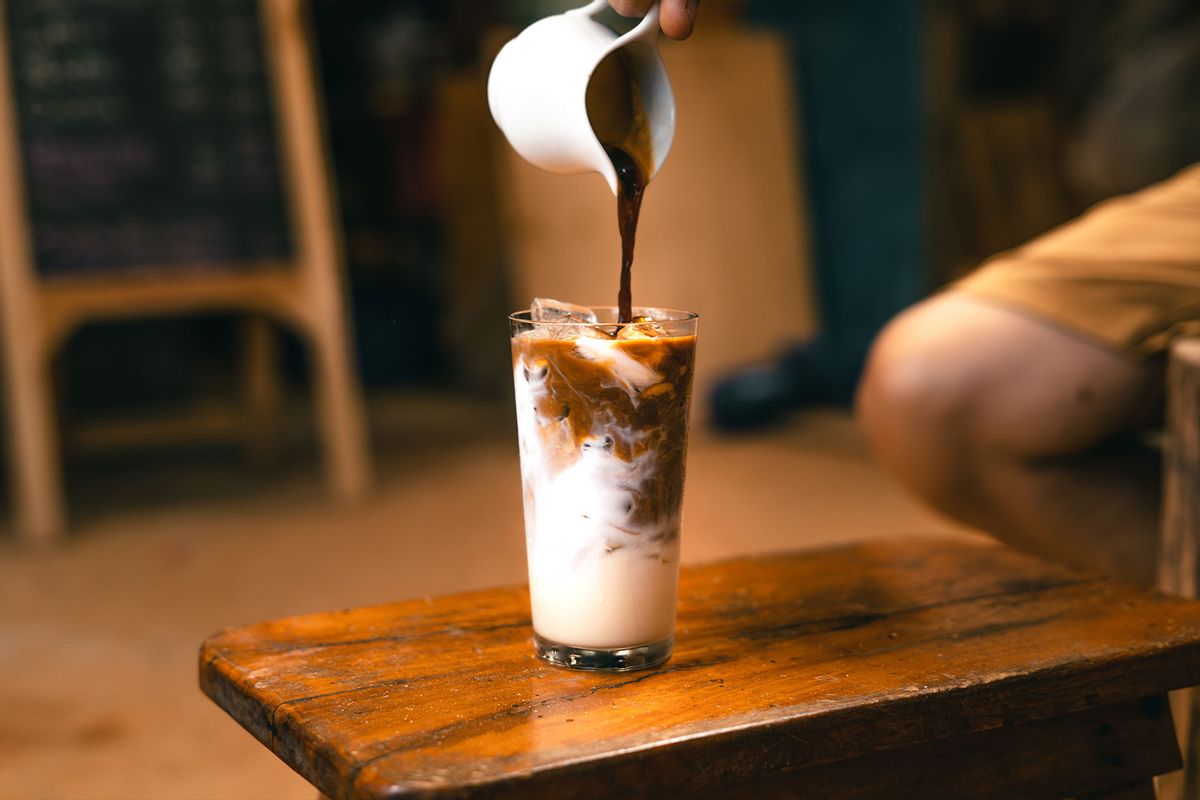 I'll admit it: Initially, I was a bit dismayed when I received a Dec. 1 press release from Pepsi that used both "dirty soda" and the term "Pilk" in the subject line. It encouraged customers to give the "naughty new twist" on holiday cookies and milk a chance.

"For those new to Pilk, it is the delicious and must-have drink that combines the crispness of Pepsi with the subtly sweet and creamy taste of milk, traditionally topped with creamer," the release read. "And it pairs perfectly with cookies. Known in pop culture as a 'dirty soda,' this trending combination has grown over several decades and has recently gained viral fame on TikTok."

An accompanying commercial was titled, "That Is One Dirty Soda, Santa." It featured actress Lindsay Lohan — dressed, of course, in a variation on her "Mean Girls"-era Santa costume — drinking Pilk. The concoction was beautifully styled to look like a cold brew with a heavy pour of cream.

In a quote that may actually have been written by Lohan's assistant's assistant, the actress allegedly told Pepsi: "For people learning about Pilk for the first time, I won't lie to you when I say I was a bit skeptical when I first heard of this pairing, but after my first sip I was amazed at how delicious it was, so I'm very excited for the rest of the world to try it."

So far, "skeptical" seems to be the best way to describe the general public's response to the advent of Pilk. "Get your pilk (pepsi/milk) away from my family and i IMMEDIATELY," one Twitter user wrote.

Another added: "[P]ilk is shock humor. pilk is not a consumable and marketable product. pilk is what you drink when you've hit rock bottom and you're craving the desire to feel SOMETHING, even if that feeling is disgust."

It's worth noting, perhaps, that "Saturday Night Live" cast member Sarah Sherman — who, before joining the cast, was known around Chicago for her cult-favorite "gross-out" comedy shows — simply shared the commercial on Twitter with the ominous monosyllabic caption "pilk."

It became apparent very quickly that the concept of mixing soda and milk (or dairy, in general) produces the same visceral response some experience at the thought of combining seafood and cheese.

Surveying the social media response at large, it became apparent very quickly that the concept of mixing soda and milk (or dairy, in general) produces the same visceral response some experience at the thought of combining seafood and cheese. As I wrote for Salon in 2021, I'm not outright opposed to the combination simply because it pops up across the cuisines of various cultures:

The best enchiladas del mar I ever had were stuffed with minced crab and shrimp, covered in a salsa verde and generously sprinkled with crumbly, briny cotija. In Greece, there's shrimp saganaki, a flavorful mix of sautéed shrimp, tomatoes, olives and pan-fried cheese, typically feta. McDonald's has the Filet-O-Fish, Maryland has crab dip, my local deli has a tuna melt, and — and I'm going to show my midwestern roots here — just writing this has me craving a hearty, cheddar-covered tuna noodle casserole.

And while Pilk definitely may seem like an attention-grab with the blockbuster rollout and brand-tied variations (make a cherry-flavored version with Pepsi Wild Cherry or go extra creamy with Nitro Pepsi Vanilla, the company suggests), mixing dairy and soda is more common than you may think.

As Brian Bushard pointed out in Forbes, "The drink, however, is far from new — with Laverne on 'Laverne & Shirley' drinking milk Coke as a comfort drink during the show's run in the 1980s, and some restaurants and ice cream stands referring to the mix of Coke and vanilla ice cream as a 'brown cow.'"

Or take, for instance, the classic egg cream. While the drink contains no actual eggs or cream, the cold beverage contains milk, flavored syrup — often chocolate — and soda water. There are several variations on the drink, including the "French soda."

"The combination of fizzy water, flavored simple syrup and a splash of half-and-half over ice is exactly what you want in between your morning cold brew and your it's-finally-late-enough-to-start-drinking rosé sangria," Emma Wartzman wrote for Bon Appetit in 2018.

At the time, Wartzman interviewed Jeanie Janas, the general manager of Bellecour in Minneapolis. Janas said the bakery served various flavors of the drink, including rosemary-berry, cocoa nib-coriander, lavender-vanilla and — while it's in season — a rhubarb-orange zest. Sounds a bit more chic than Pilk, right?

"The best thing about these is that they are refreshing but satisfying at the same," Janas explained. "You have the fizzy water which lightens the drink up, and then the cream which makes it richer and gives it a nice mouthfeel. Basically, it's not heavy even though it has depth to it. It's like a creamsicle."

. . . And you don't even have to chase down an ice cream truck to get one.

Expanding internationally, the mixture of milk and soda is even more common. Take Milkis, a Korean milk soda, for example, whose label proclaims "new feeling of soda beverage." The drink is made by combining fruit-flavored sodas, ranging from lemon-flavored to muskmelon, and a splash of milk.

"You have the fizzy water which lightens the drink up, and then the cream which makes it richer and gives it a nice mouthfeel. Basically, it's not heavy even though it has depth to it. It's like a creamsicle."

In India and Pakistan, you'll come across Doodh soda. As Haneen J. Iqbal wrote in her 2021 essay, "My Iftar Table Isn't Complete Without Doodh Soda," the drink is made by mixing lemon-lime soda (like 7-Up or Sprite) with milk.

"I like to think of it as the naughtier Punjabi cousin to Persian doogh (which is made with yogurt and club soda)," Iqbal wrote. "I was four or five the first time I tried it, so I didn't need any particular convincing. Milk? Good. 7-Up? Even better. Mix the two and now we're talking."

Back in the states, the "dirty soda" trend saw an uptick in national popularity with the advent of TikTok. Many, including writer Jeremy Pugh, consider the Mountain States as the region of origin of the beverage, which he describes as "an unwholesome co-mingling of flavors that were once deemed 'suicides.'"

More practically, they're "alcohol-free mocktails with optional flavor, cream and fruit add-ins." They're particularly popular in areas with large concentrations of Mormons. They can be made caffeine-free, as many observant Mormons don't consume caffeine.

In fact, an entire dirty soda chain, fittingly called Swig, was established in 2010.

Elsewhere, the combination of soda and milk remains something of a gustatory challenge for large swaths of the world. In 2019, British comedy writer James Felton shared an extended bit on Twitter in which he called the combination of milk and Coke a Birmingham (England, not Alabama) delicacy. This led to folks all around the world filming themselves doing the "Milk Coke Challenge," which involved simply drinking the beverage.

Results were mixed, but as one Twitter user wrote: "Tried my first milk coke after learning about it on Twitter earlier today. I expected it to be bad, but I have to say my expectations were completely right. It's not good. I do not recommend mixing coke and milk."

That said, when it comes to combining soda and dairy, go with your gut. I swear to you: It's not bad all the time. In fact, I was messaging with Salon editor in chief Erin Keane about the trend, and we both agreed that a carbonation-spiked White Russian wouldn't hurt our feelings. (As she pointed out, though, there are no beverages in the "Trader Vic's Bartender Guide" that call for the blend of dairy and soda.)

There's currently a can of Pepsi and a gallon of oat milk in my refrigerator. For now, I think I'm going to keep them isolated in their respective containers.

A version of this article first appeared in Salon Food's newsletter, The Bite. Sign up here to receive exclusive food writing, recipes and more.