The strange, psychedelic history of Christmas

How do reindeer fly Santa's sleigh around the world? If you guessed hallucinogenic mushrooms, you might be right 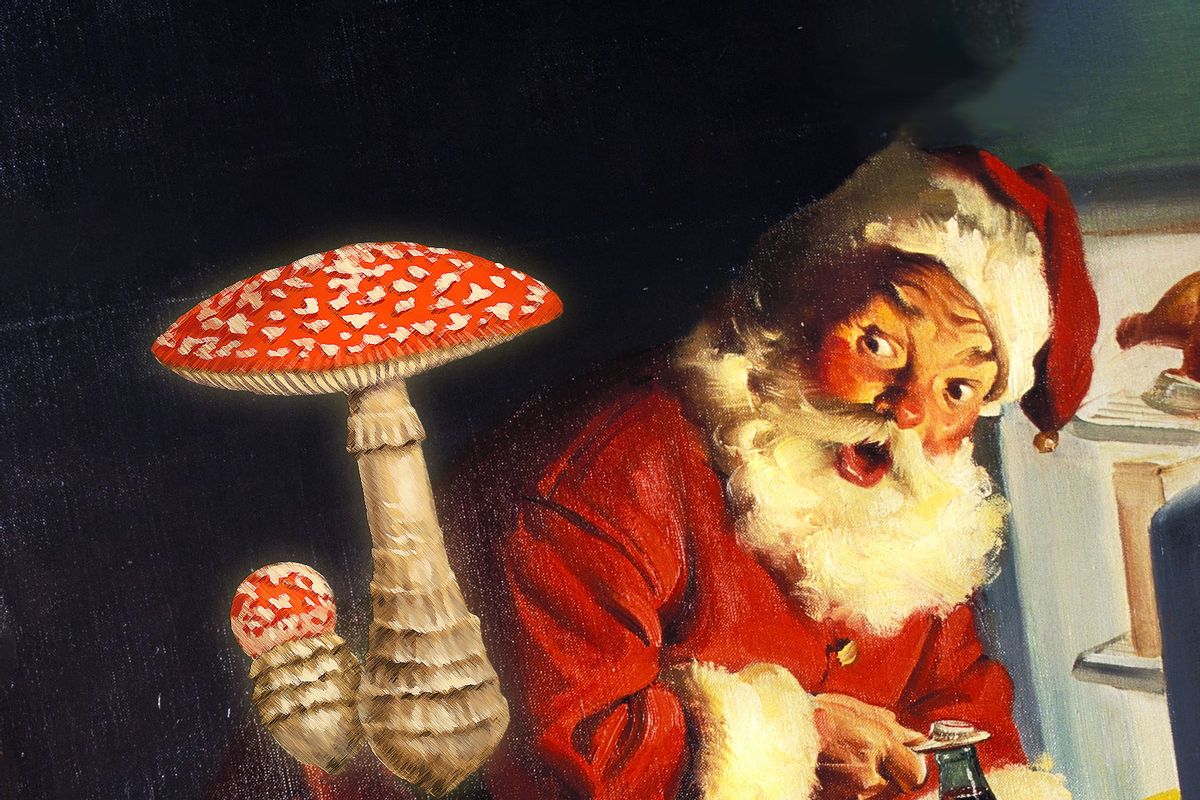 How do reindeer fly Santa's sleigh around the world? If you guessed hallucinogenic mushrooms, you might actually be right.

It almost sounds sacrilegious to mix psychedelics and winter festivities, but there's actually a fair amount of historical evidence that suggests modern Christmas was borne out of trippy traditions. From flying reindeer to presents and ornaments to the bearded man with the North Pole address, a ton of iconography overlaps with indigenous psychedelic shamanism in Siberia and northern Europe.

Some historians argue that Santa Claus is actually a "magic" mushroom shaman, as indicated by his red and white outfit. It resembles the psychedelic fly agaric mushroom, a fungus as bright red as Rudolph's schnoz sprinkled with white flecks like snow. Drawing on this and other evidence, quite a few scholars subscribe to theories that numerous Christmas traditions spawned from pagan psychedelic rituals, even if it's not a mainstream belief.

But how much truth is there to this hallucinatory history?

A ranking of bad Santas, from naughty to vice

The fly agaric (Amanita muscaria) mushroom is so iconic, it's often the first breed of fungi that comes to mind. Its name derives from an old use as a fly-killing pesticide, but today it's better known for its portrayal in emojis and ubiquity in popular culture, such as in children's fairy tales or "The Smurfs." It actually has some psychedelic properties, not unlike the weird effects of similar mushrooms in "Alice in Wonderland" and "Super Mario."

In fact, one of the most commonly reported effects from eating or even smoking fly agarics are "gulliverian" and "lilliputian" hallucinations, both of which are named for the book "Gulliver's Travels," a story following the eponymous tourist as he encounters little people known as Lilliputians. The similarly named hallucinations can give people the illusion of shrinking or growing, which means there's some truth to the resizing effects associated with Alice and Mario.

Some historians argue that Santa Claus is actually a "magic" mushroom shaman, as indicated by his red and white outfit.

Fly agaric mushrooms are very different from psilocybin-containing "magic" mushrooms. While psilocybin is at the center of a growing scientific and cultural revolution, A. muscaria mushrooms don't contain any psilocybin. Instead, they carry a cocktail of psychoactive compounds such as muscimol and even bufotenine, which oddly enough is also secreted by desert toads. Other compounds in the mushrooms, like ibotenic acid, can be neurotoxic in high doses.

Users of fly agarics may also experience dreamlike, sedating feelings, as well as agitation, confusion, dizziness, auditory and visual perceptual changes and distortions of space and time. The effects usually wear off after 24 hours, but one case report detailed a man who had "a 5-day paranoid psychosis after A. muscaria ingestion," while another man slipped into a coma after eating half a kilo of fly agaric mushrooms. Both survived, but death, while rare, is not unheard of from these mushrooms, which are widely considered by mycologists to be toxic (though they can be detoxified for safe consumption).

What does any of this have to do with Christmas? Well, fly agaric mushrooms are scattered across the globe, on every continent except Antarctica. Humans have been using them as an entheogen — that is, a drug with a spiritual purpose — since ancient times in Europe, Asia and the Americas. "It has been speculated that it may well be the oldest entheogen or hallucinogen known to mankind," Blom wrote.

Even more intriguing, the mushrooms only grow beneath trees, but the fungus especially loves pine trees. The reason is because fly agaric mushrooms are mycorrhizal, a combination of the Greek words for "fungus" (mýkēs) and "root" (rhiza), which means the fungi need trees to survive.

The red-and-white bulb we call the mushroom is really just the fruit. The rest of the fungus is underground, forming a network of filaments called mycelia that worms its way into the roots of trees. The two organisms trade nutrients, so it's a symbiotic relationship. But no roots, no mushrooms. That's why it's not easy to reproduce these mushrooms at scale, though some researchers are trying to solve this issue.

When they sprout up — almost like magic — the mushrooms may give the appearance of "presents," similar to the gift boxes we now associate with Christmas. They can even get quite large, about 30 centimeters tall or the height of a sheet of A4 paper. Fly agarics are commonly depicted in old Christmas cards, and the mushrooms themselves were often used as ornaments.

For reindeer, these mushrooms are a delightful treat, and yes, they seem to experience some kind of intoxicating effect from ingesting them. Humans aren't the only animals that like to get high. Many creatures, from dolphins to bears and jaguars, have been studied seeking out intoxicating substances in nature.

When reindeer get buzzed on A. muscaria, they behave somewhat drunkenly. Their prancing behavior — especially to someone who had taken mushrooms themselves — might appear like flying. People are even known to drink the urine of reindeer that have eaten A. muscaria.

The Sámi people of Lapland, who hail from northern Finland — not far from the North Pole — centered both reindeer and fly agaric mushrooms in their culture. Sámi religious leaders called shamans would act as mediators between this world and the spirit world, traveling by reindeer as they visited homes during the Winter Solstice to perform healing rituals with the psychedelic mushrooms. The shamans were even known to dress in characteristic red and white. But during the winter, many doorways would be snowed in, leaving only one way to enter: down the chimney.

When you start adding up these details, the idea that Santa was a mushroom shaman who flew around on tripping reindeer starts to make some sense.

"Santa is a modern counterpart of a shaman, who consumed mind-altering plants and fungi to commune with the spirit world," John Rush, an anthropologist and instructor at Sierra College in Rocklin, California, told Live Science.

When you start adding up these details, the idea that Santa was a mushroom shaman who flew around on tripping reindeer starts to make some sense. At least some of these elements could have bled together with other Christmas origin stories, such as St. Nicholas being one of the progenitors of Santa.

In the end, how strong is the evidence for this psychedelic Christmas tale? It's intriguing, but far from definitive. Part of the problem is that shamanism in Siberia was stamped out by the Soviet Union, which banned the religion and assassinated many who practiced it. The Sámi also experienced colonization from Finland, which has helped make reindeer herding all but obsolete. There isn't really anyone to ask about how much truth there is to these rumors, but perhaps writing it all off as coincidence is dismissive, as well.

Either way, it's a good reminder that, despite Christ in the title, most Christmas traditions have very little to do with Jesus Christ. That isn't necessarily a bad thing. Instead, these traditions are an amalgamation of many different cultures, religions and ways of understanding the world — or just surviving the harshness of winter using fantastic stories while getting a little buzzed.