Is Joe Biden in trouble? Not so much — but the rest of us definitely are

Biden's documents "scandal" is a bad look, but a minor blip. Our deeply confused nation is the real problem 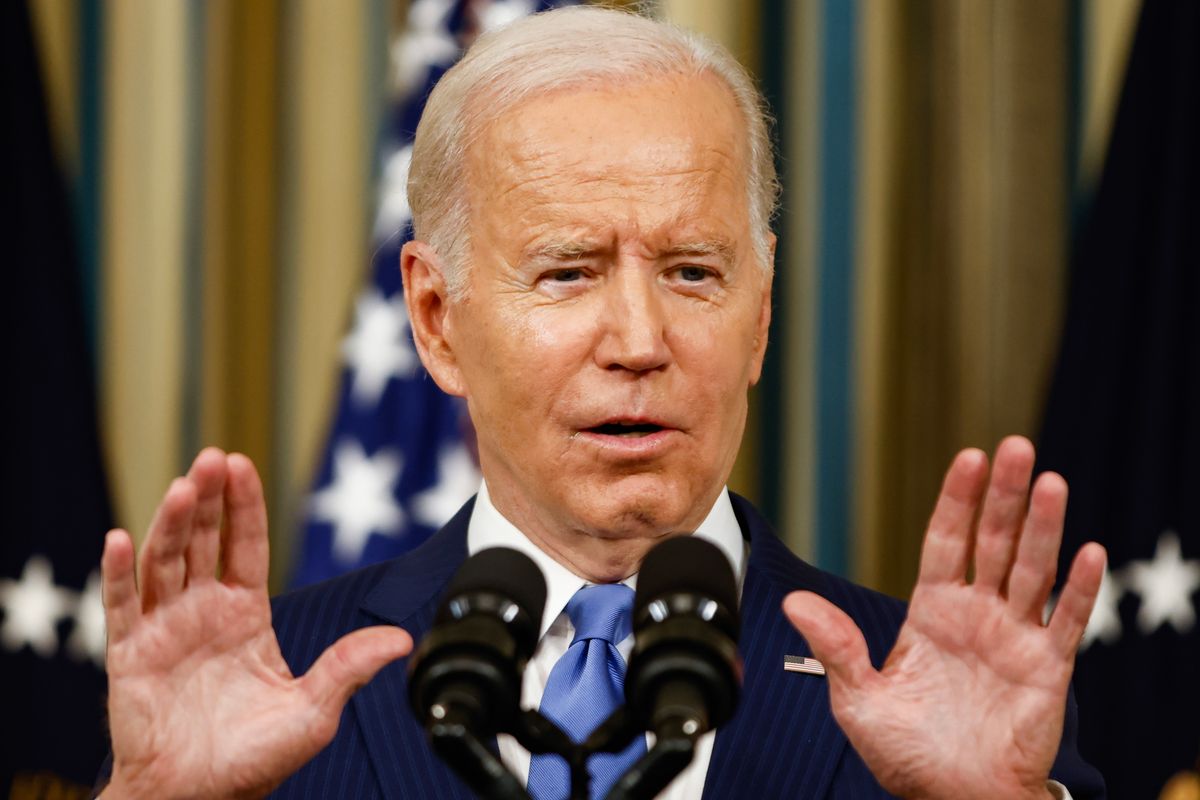 We are in trouble.

It's not just that Marjorie Taylor Greene, a known supporter of the insurrection, is on the House Homeland Security Committee.

It isn't just that Joe Biden is under investigation by the DOJ for having classified documents in his possession — some of them found in the same garage as his beloved vintage Corvette.

It isn't that Donald Trump has yet to be indicted for any of the many criminal activities he is believed to have orchestrated as president.

It isn't that George Santos is a habitual liar and con artist who has been called on to resign by members of his own party — showing there's even a depth to which some Republicans will not sink.

Proud Boys are right about one thing: It's ridiculous that Trump's not in prison

It isn't the fact that the U.S. continues to get drawn into a war in Ukraine that Russian despot Vladimir Putin wages with little care for life, liberty or the continued existence of the human race.

It's the appearance that the voting public is more emotionally involved in the NFL playoffs rather than anything resembling news events which actually affect life on the planet.

The NFL fan world is filled with people more rabid than the Trumpers. This week they've ignored whatever else is going on in the world, thus making sure media is filled with stories that tell us Kirk Cousins is a choke artist, Aaron Rodgers is a humble, great leader who deserves better than the Green Bay Packers and Tom Brady is a demigod whose arms should be bronzed and his semen stored for distribution to fans and their daughters for eternity.

Let the facts show that appearance is not reality. Cousins is a fine quarterback, Aaron Rodgers is a pompous, vaccine-denying has-been and Tom Brady is flat-out old. America can't face those facts because they don't fit the going narrative — the same as in politics. The bottom line is that most of America has lost its ability of critical thinking and for too many people appearance has become reality.

Thus, though Cousins played a great playoff game against the New York Giants, throwing for two touchdowns and running for one, fans think he choked by throwing to a checkdown receiver on the last play of the game. Facts will show that the Vikings have one of the worst defenses in pro football, and Cousins led his team to a record number of comeback victories, but the perception that he's  a choke artist is a popular narrative (honed in Washington, no less, to make excuses for a number of losses with the team now known as the Commanders) and thus is promoted and believed.

We do the same thing in politics: What appears at first glance to be true is what we believe. Why do you think magicians can make a living? As a wiser man than I once said, it is far easier to fool people than to convince them they've been fooled. Speaking of that, since fools dominate the GOP we find ourselves dealing with the appearance of political discourse that is anything but. Trump, Greene, Santos, Ron DeSantis, Jim Jordan and a host of other miscreants who probably have oversized shoes, a rubber nose and plenty of white greasepaint in their makeup kits try to appear as patriots. Facts would indicate otherwise, but even if the aforementioned ship of fools showed up in full clown makeup and screamed like banshees on the floor of the House, many of their supporters still could not grasp the difference between appearance and reality.

The same goes for some of President Biden's supporters and the recent revelation that he too had classified documents in his possession after leaving the White House as vice president. On the face of it, this has a taint reminiscent of the recent scandal involving Donald Trump, who when confronted by the Justice Department at first denied having any such documents, then claimed the FBI had set him up before declaring that whatever was found "is mine."

The Biden revelations about classified documents were exacerbated by the fact that some were found in that garage with his prized Corvette. That fact means little, but the appearance, at least for some, is that Biden is careless and perhaps senile. As usual, the Democrats have been ineffective in pointing out the difference between appearance and reality. Having succumbed to the Republican framework of events, they are reacting to what the GOP wants rather than to reality.

There are some — especially among my brethren in the press — who refuse to look beyond the surface similarities of the two cases in a brazen and crude attempt to be "even-handed." Then there are those who refuse to look at either case objectively because they feel either Biden or Trump are above reproach. There are also those who are incapable of discerning the differences and those who benefit from refusing to recognize them. The press is filled with the same face paint, rubber noses and oversized shoes as the GOP.

There are those so convoluted in their thinking — I speak of you, Rep. Jim Jordan — as to insist the DOJ investigation of Joe Biden's documents is being conducted only to give the president cover.

All these viewpoints are based upon perception and appearance, not reality. There are those who believe it is horrible that Biden is being investigated by the DOJ. For them, it makes him look guilty, and they argue about why the DOJ picked up the Biden case so quickly when it took so long to investigate Trump, "and he's the real criminal here." Then there are those who have the mental acuity of a moth circling a light bulb, believing it's circling the sun (I speak of reprobates like Jim Jordan), so convoluted in their thinking that they believe a DOJ investigation, should it exonerate Biden, will have been conducted merely to give the president cover. Appearance versus reality.

Should Biden be investigated for having classified documents in his possession? Prudence dictates that he should. Is there much to worry about in his case? Of course not. Biden has his faults, but his wardrobe doesn't consist of oversized shoes, rubber noses and white greasepaint.

Biden himself has said the country is "at an inflection point." He's said that about as often as press secretary Karine Jean-Pierre reminds us that she can't say anything in the Brady briefing room that might violate the Hatch Act. Biden has said that more often than Donald Trump has claimed that everything he touches "Is mine."

But Biden doesn't go far enough. It's not that the country is at an inflection point — the world is.

One day spent on social media will make you want to shower, go postal or drink yourself into a Hunter S. Thompson-like stupor. Add a few hallucinogens, and if Hunter were still around, you could party with him. That would be a hell of an appearance and a frenzied reality.

Just stay away from whatever horrifying combination of meth, Peruvian marching powder and moonshine drew Marjorie Taylor Greene and Lauren Boebert into a fight in a Capitol bathroom recently. Greene apparently admonished Boebert for turning on Kevin McCarthy during the recent gutter fight for the House speaker ship, suggesting that McCarthy had given Boebert a sweaty wad of cash to buy her loyalty. Boebert ran away and tweeted, "Be kind. Don't be ugly." I'm sure she wanted to appear refined and professional, but the reality of her history of trash-talking tells us she's just a hypocrite.

"Don't be ugly": Marjorie Taylor Greene and Lauren Boebert get into loud argument in House restroom

Finally there's the appearance that Jean-Pierre, the White House press secretary, is getting beaten up daily over Biden's classified documents. While the Biden White House can and should do a better job of explaining the case, it's amusing to conclude that Jean-Pierre is getting "beat up" by the press or anybody else. Whether you believe she should be pummeled is a different issue. But to think that any of those who are questioning her in the briefing room have the necessary gravitas to understand the issue, let alone ask the proper questions, and thus are "beating her up" — well, that's laugh-out-loud hilarious.

Joe Biden has said the country is at an "inflection point" even more often that Donald Trump has claimed all those classified documents "are mine."

With the exception of a small handful of reporters with the experience to craft their own questions, the reality is that most reporters come to the briefing room with questions drafted in advance by a committee of editors or producers. The reality is that the White House staff knows what's going on, and is more than prepared for whatever is thrown their way by the few chosen voices who ask questions from the front two rows.

It appears the honeymoon is over for Biden among the press — and he's had an extended one, mostly because he hasn't courted disaster, discord or disharmony with the press the way his predecessor did. But the reality is that press briefings today are nothing more than theater staged for our amusement, often without the knowledge of the participants in the press who think they're playing the roles of stalwart, independent reporters.

That reality shows just how deeply troubled our world is.

It's a world where everyone shouts their moral superiority over social media with no humility, and no real understanding of the realities we face.

We confuse entertainment with reality. We confuse ignorance with morality. We want to live in a binary world where there are only two choices  — and if you don't make mine then you're a devil. That's not true for absolutely everyone, of course, but it's true for enough of us that the world's fate rests in the balance.

We need a dose of reality right quick, combined with a dash of critical thinking many people simply don't possess, if we are to avoid an unending slide into a puddle of excrement that includes the House Republicans and all those who don't appreciate the great play of Captain Kirk Cousins.

from Brian Karem on Biden, Trump and America