“I will never leave that woman”: McCarthy vowed to "always take care" of Marjorie Taylor Greene

The GOP House speaker even went to bat for MTG after she was booted off Twitter, according to The New York Times 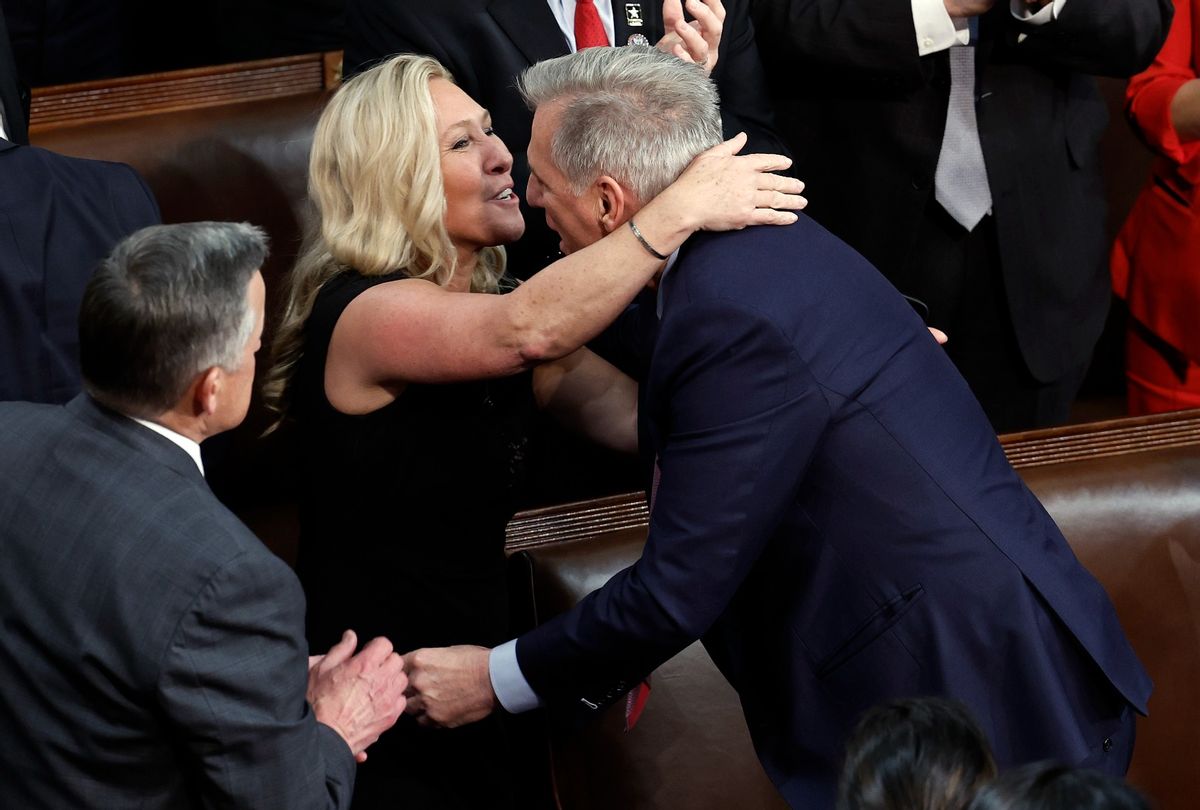 Rep. Marjorie Taylor Greene, R-Ga., spoke at a white nationalist rally, claimed California wildfires were caused by Jewish space lasers, called for the execution of elected officials, and chased down a school shooting survivor to harass him in the street -- but, according to a New York Times report, House Speaker Kevin McCarthy, R-Calif., "will never leave that woman."

McCarthy in a private conversation with an anonymous source broke with his previous condemnations of Greene's extremist remarks and declared absolute loyalty to the far-right conservative, according to the Times.

"I will never leave that woman," McCarthy reportedly told the anonymous source. "I will always take care of her."

McCarthy defended the remark to the Times, telling that outlet if "you're going to be in a fight, you want Marjorie in your foxhole."

"When she picks a fight, she's going to fight until the fight's over. She reminds me of my friends from high school, that we're going to stick together all the way through," he said.

The Times further revealed that when Greene's attempts to spread misinformation about COVID-19 prompted Twitter to shut down her account, McCarthy went to significant lengths to help her lift the suspension -- including helping draft a formal appeal on her behalf and having his general counsel, Machalagh Carr, argue with Twitter executives on the phone for hours.

The report comes less than a week after McCarthy faced heavy criticism from both parties for appointing Greene to the powerful House Homeland Security and Oversight Committees. White House spokesman Andrew Bates on Thursday called on Republicans to "come clean" about the secretive deals McCarthy made with far-right conservatives during his bid to secure the speakership.

"What other hidden bargains did Speaker McCarthy make behind closed doors with the most extreme, ultra MAGA members of the House Republican conference?" Bates said in a statement to Politico. "The American people have a right to know -- now -- which is why we are calling on him to make every single one of them public immediately."

"It's clear that Kevin McCarthy was willing to sacrifice anything to become speaker – including the security of our country," said Lee.

Noah Bookbinder, president of the nonpartisan Citizens for Responsibility and Ethics in Washington, suggested on Twitter that the report foreshadowed how private compromises could be shaping the House.

"The Speaker of the House has reportedly forged an 'ironclad bond' with extreme election denier and conspiracy theorist Marjorie Taylor Greene," he wrote. "That tells you a lot about how the House will be working to undermine, not support, democracy this year."

about MTG and McCarthy