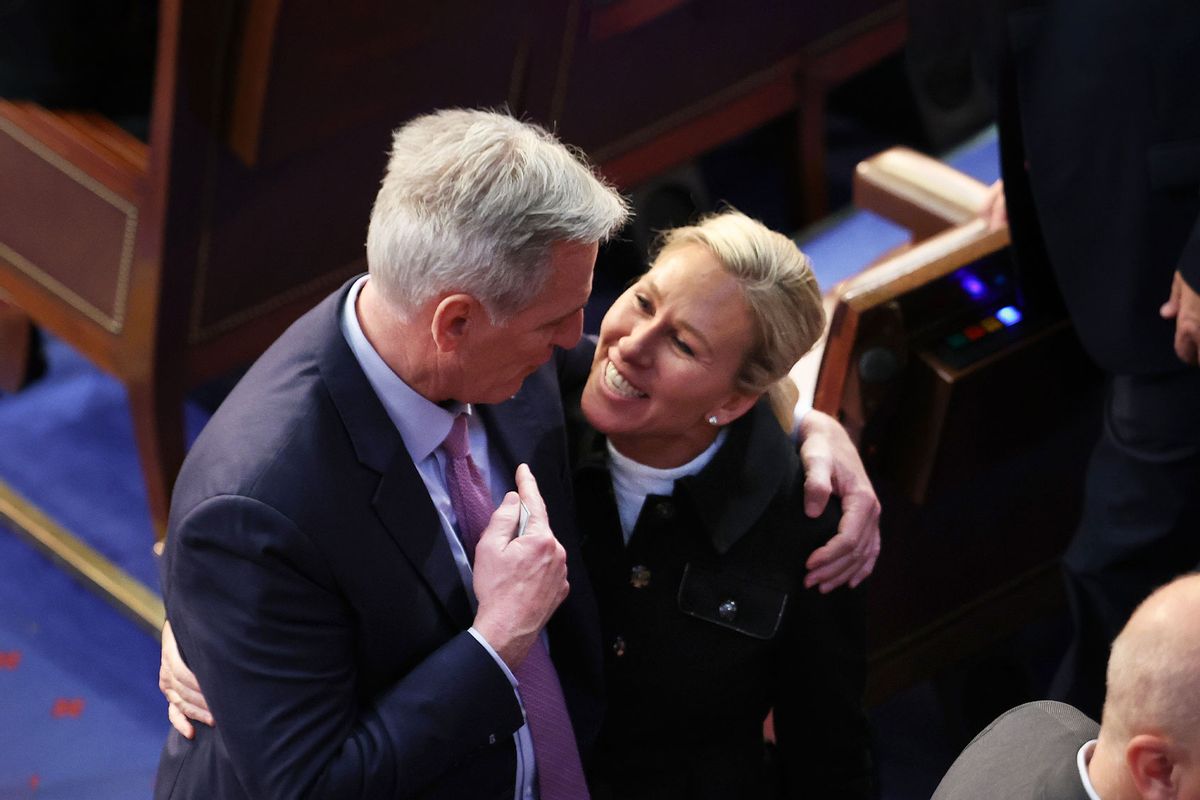 Throughout the fight over the Speaker of the House seat earlier this month, the Beltway press kept up this weird pretense that Rep. Kevin McCarthy, who eventually secured the leadership role, is somehow at odds with the looniest members of the Republican caucus. The assumption that McCarthy is secretly sane and just trying to manage the far-right fringe persisted throughout his shepherding of the loudest conspiracy theorists into committees, like the House Oversight Committee, where their bizarre lies will get dramatically amplified. The assumption is that McCarthy is a reluctant handmaiden to the far right, a man boxed in by the outsized power the worst actors have in his slim majority.

That was always a dumb assumption, however, especially considering that McCarthy voted to support Donald Trump's attempted coup in 2021. The likeliest explanation for his behavior has always been that McCarthy is a member of the insurrectionist caucus in good standing and that the "rebel" faction that refused to vote for his Speakership was only acting out of a desire for media attention, not sincere disagreement with him on the issues.

Hopefully, this new bit of reporting from I-95 mainstays Jonathan Swan and Catie Edmondson at the New York Times will finally counter this myth of McCarthy's covert normalcy. Starting with a delicious headline, "How Kevin McCarthy Forged an Ironclad Bond With Marjorie Taylor Greene," the article delves into how politically infatuated McCarthy is with Greene, a loudmouthed bigot who has endorsed every conspiracy theory under the sun, including that the Sandy Hook shooting was a "false flag" and that an international Jewish conspiracy starts wildfires with space lasers. "I will never leave that woman," McCarthy is quoted as saying about a person who equated temporary mask mandates with the Holocaust.

McCarthy's nauseating adoration for Greene continues throughout the article, leaving it impossible to believe there's anything resembling reluctance on either side of this alliance. It should also end all doubt about what Republicanism is about these days: Anger at the rest of America for rejecting the GOP's backward ways, and a desire to enact revenge. Greene is the nihilistic soul of the modern Republican Party, the living symbol of how the party would rather destroy this country than accept social progress.

Greene gets a lot of attention for her kooky beliefs, including her fascination with the QAnon conspiracy theories. But what's even more important is what's fueling those conspiracy theories and those who believe them. Both Republican politicians and voters increasingly embrace conspiratorial thinking to justify what otherwise is unjustifiable, which is an unhinged rage at the majority of Americans, who have rejected GOP views on everything from abortion to LGTQ rights to taxation rates. The close alliance of McCarthy and Greene shows this rage is hardly confined to the fringes of the Republican Party. It has become the GOP's defining feature.

"I will never leave that woman," McCarthy is quoted as saying about a person who equated temporary mask mandates with the Holocaust.

McCarthy's contempt for the Americans he supposedly was elected to serve was on full display in his committee assignment strategy. This was most in-your-face when it came to giving committee assignments to Rep. George Santos, R-N.Y., who has been in the news for weeks not just for lying about his entire life, but for reports of truly evil behavior like allegedly stealing $3,000 that was raised to pay for surgery for a disabled veteran's dog. (The dog, unsurprisingly, died.) Across the board, however, the main message of McCarthy's committee choices is, "I have absolutely no respect for the legitimate work of government."

None of these choices are about good governance, but the opposite.

Greene is the nihilistic soul of the modern Republican Party, the living symbol of how the party would rather destroy this country than accept social progress.

Turning the Oversight committee into a clown car of conspiracy theorists isn't just about abusing government resources to generate Republican propaganda. It's about expressing disdain for the very idea of oversight. They will, of course, be ignoring all real corruption in government in order to focus attention on fake scandals about President Joe Biden and his family. It's rubbing our collective noses in the fact that Republicans don't think corruption is a bad thing. Indeed, they clearly don't believe Americans deserve anything better than being governed by corrupt, shameless people.

This attitude does help explain why, even after most of the country has mostly moved on, Republicans are still obsessed with the pandemic and with punishing anyone who tried to reduce the death rate from COVID-19. Right-wing media continues to peddle wild conspiracy theories accusing former Biden medical advisor Dr. Anthony Fauci of somehow causing the COVID-19 virus, and there's little doubt House Republicans will abuse subpoena powers to harass him publicly. The only thing Dr. Fauci did to draw this much ire is become the face of efforts to curtail the pandemic's impact. In the nihilistic GOP, there is no greater sin than trying to save American lives.

That's why there's good reason many fear that this time around, Republicans are going to shoot the hostage in their debt ceiling standoff antics. In the past, Republicans have threatened to tank the world economy, but have always stopped short of actually pulling the trigger. But that was in the pre-January 6 era before Republicans fully embraced the "burn it all down" mentality. To be certain, the goals of prior debt ceiling battles — defunding Medicare and Social Security, mainly — show that seething hatred for most Americans is at the heart of GOP politics, which is why they want to deprive people of a retirement nest most of us have paid into our entire adult lives. But the fact that this time, Republicans can't even seem to articulate what they want in exchange for raising the debt ceiling is a worrisome development. It suggests they're long past using this as a threat to get something in exchange, but that tanking the economy is an end in itself. They're past economic hostage-taking and getting to the point of thrill-killing.

We'll see if they get that far as to actually let the U.S. stop paying its debts. The GOP is still beholden to the wealthy corporate class of donors, who may not care if the party embraces pro-pandemic policies, but will draw the line if the party starts hurting their economic bottom lines for the sheer sick pleasure of it. But no one should mistake one minor check on right-wing excesses as anything resembling a party tethered to reality. Just as McCarthy seems to bear hug Greene every time he sees her, the GOP has wed itself to a politics of destruction.