He said "I know how to handle people who f**k with me, I have since February 2012" — the month he killed Martin 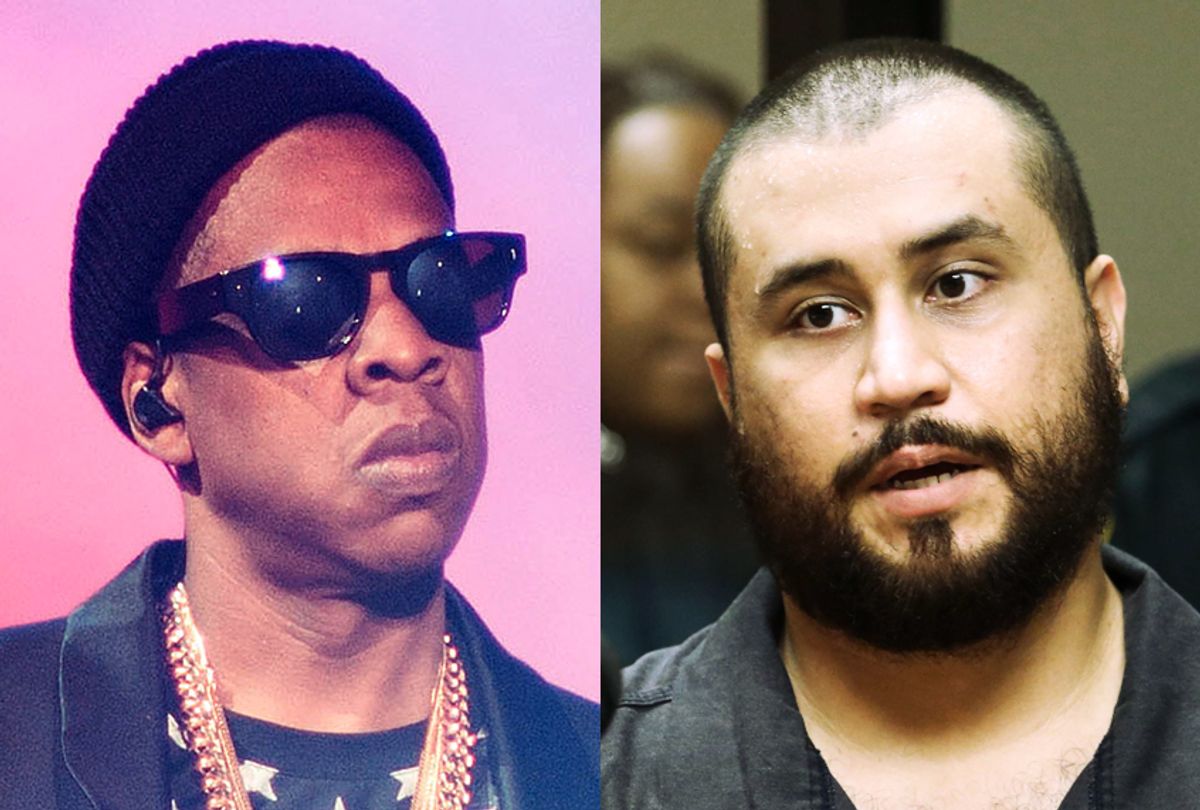 IMAGE DISTRIBUTED FOR PARKWOOD ENTERTAINMENT - Beyonce and JAY Z performs during the On The Run tour at Mercedes-Benz Superdome on Sunday, July 20, 2014 in New Orleans. (Photo by Robin Haper/Invision for Parkwood Entertainment/AP Images) (Invision For Parkwood Entertainm)
--

George Zimmerman has threatened to physically assault Jay-Z over the docuseries the hip-hop star is producing about Trayvon Martin, 17-year-old Zimmerman shot and killed.

As HuffPost reports, Zimmerman said the production team for the series "harassed" his family, and showed up to his parents' house and uncle's house unannounced to get them to participate in the show. He also claims, the crew trespassed, and that he will "beat Jay-Z" and "anyone who fucks with my parents will be fed to an alligator."

"What I said is I would beat him as if I was Solange, and he would find himself coming out of the south side of a gator if he comes to Florida and bothers my family," Zimmerman told the Orlando Sentinel.

Martin also said, "I know how to handle people who fuck with me, I have since February 2012." Zimmerman killed Martin on February 26, 2012.

Rapper Snoop Dogg responded to Zimmerman's threats with one of his own: "If one hair on Jays hair is touched that’s when the revolution will b televised. . . Trayvon Martin Gone but not forgotten."

Jay-Z produced the Kalief Browder docuseries, which premiered earlier this year, and announced that he would similarly produce a series on Trayvon Martin. The show, titled "Rest In Power: The Trayvon Martin Story," is based on the books "Suspicion Nation: The Inside Story of the Trayvon Martin Injustice" by Lisa Bloom and "Why We Continue to Repeat It as well as Rest in Power: The Enduring Life of Trayvon Martin," written by Martin’s parents.

Jay-Z partnered with the Weinstein Company for "Time: The Kalief Browder Story" and was set to do so for "Rest In Power," though Harvey Weinstein's name has reportedly been removed from the project. The controversy around Bloom, who was Weinstein's lawyer during the early part of the controversy surrounding the producer, is still unsettling for many and it is unclear whether it will have an impact on the show.
Zimmerman told the Sentinel that he is making a documentary of his own and writing a book titled "Sheepdog Nation: The Manipulation of the Masses by the Mainstream Media."
After being acquitted of the second-degree murder of Martin in 2013, Zimmerman has periodically returned to the public spotlight through incidents of possible domestic violence, hateful speech, tasteless stunts and bizarre, ugly, sometimes racist behavior. Perhaps most notably, Zimmerman tried to sell the gun he used to kill Martin, claiming it was "a piece of American history" last year.