Married at 15, or How he met my mother

For most of my life I have had an uncomplicated relationship with the memory of my father. Now I have questions 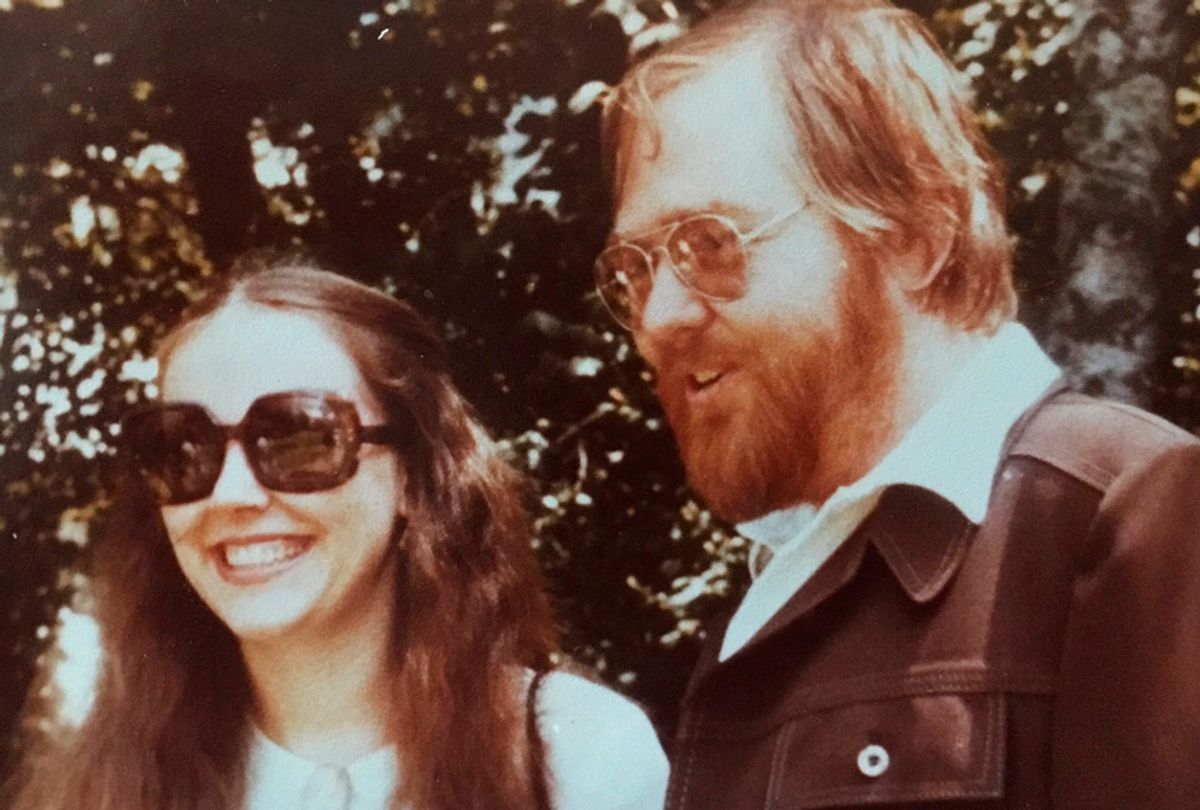 The author's parents (courtesy of the author)
--

The part of any story I love best is the exposition, even a love story: Here are the people we will know, and this is what they do. I can describe the opening scenes of movies I have otherwise forgotten. Plot is what happens, but before it can begin we have people moving through their day, so sure of their reality. For most of my life I have been free to have that kind of uncomplicated relationship with the memory of my father: He loved me, he died when I was very young, end of story. No reckonings. He became a series of static moments trapped in amber. That's the space I like to linger in. Can’t I just show these people in loving detail, draw the gaze to my father’s red hair glowing in the bar light, to the particular swing of my mother’s favorite halter-top dress? Can’t I freeze them in this moment before the story of my family really starts? Don’t be ridiculous. Everyone knows there’s no story without choices, without change.

Oh but let’s go back anyway to a beginning, to the night they met in Googie’s on Sullivan Street in Greenwich Village. It’s 1972. Alexis, she has named herself, is stunning: 5’9” — taller in platforms — with long brown hair and a whistle that stops cabs and if anyone asks she’s 24. She’s been coming here for two years now, since she came to New York; this is her place. There is sawdust on the floor and stained glass behind the bar and she holds her own with an older crowd — artists, musicians, poets. Everyone is poor and everyone is interesting. What does she have in common with other 15-year-olds anyway? She’s in the Fat Black Pussycat watching Allen Ginsberg while they’re primping for Prom.

She is from everywhere, all her father’s forts and bases and towns. He went to war and she left Kansas at 13 to fade behind her in the prairie sun: Colorado, Boston, then New York. A lot of runaways in those years ended up dead, she tells me, or trafficked; Children of God got so many kids, even Karen from seventh grade. Not her. She is a pacifist, but after she’s jumped she gets a knife. She uses it once, the time she breaks the hitchhiking rules she won’t break again.

This is her reality and it’s all a lie and only she knows it because nobody looks or listens closely enough to notice and if they do, they pretend to forget. They all want a young girl anyway, she knows. On her real 21st birthday the owner Jimmy Red Benedetto will wish her a happy one and she’ll laugh and say Yeah, Jimmy, I’m finally old enough to drink in your bar and he’ll nearly have a heart attack when he does the math but tonight she’s here with her 19-year-old roommate Judy, a single mom who waitresses while Alexis babysits her son during the week, then they drop him off with his grandmother and party until Sunday. She didn’t want to miss what was happening in New York then, she has always told me. She couldn’t have done this in Kansas. Does she look older than Judy or younger? Can nobody tell or does nobody care?

That night they’re hanging out with her friend who gets her security jobs at concerts around the city. She works almost all the Dead shows, Doctors Hook and John, Hot Tuna, Procol Harum, the Beach Boys, you name the band, she keeps the girls away from them — unless the band says otherwise — and confiscates joints to keep the fire marshal happy and keeps the men out of women’s bathrooms, and the pay is just $25 a night but they get to keep all the pot and it beats running that scam in Port Authority soliciting donations for NORML just to pocket the cash. He has a crush on her but she’s not into it. She’s into his roommate, this tall guy with red hair and a red beard and the blue eyes I inherited. Everyone calls him Red and he looks wild like a Viking, and Daddy knows how to work his charm. He is full of stories and songs and memorized poems and he’s smarter than the other guys, at least to a girl who skipped out on high school. He knows a little bit about everything: a bullshitter, sure, in that irresistible Irish way. He is 36, close to her father’s age, a Renaissance man who drives a cab and has been in the city methadone program for a year, a decade lost to heroin and a Rikers record behind him. He woos her. This is important.

On their first date, Daddy takes her to The Captain's Table on Sixth Avenue, she thinks; some details are lost to time. She wears her favorite dress: a halter-top maxi, midnight blue with purple clouds and moons on it. A plainclothes cop approaches their table and asks to see her ID. She tells him she left her purse at home. It could have all ended there. This is my wife, Daddy tells him. He doesn’t know yet what he’s saying but the cop doesn’t ask for proof of that. He is given a reason not to care, and that’s enough.

She doesn’t tell Daddy how old she really is until a little later when they are already in love. He says, Shit, this really sucks. And she shrugs, This is just the way it is. She has conjured a woman they can all believe in if they don’t look with a cop’s eye; she wears her well. For decades I just accepted the fact of them together as preordained — who doesn’t fall in love with my mother? — but now I want to know why, even though I know what it would mean, at that moment he didn’t break her heart.

There’s the first pregnancy, my shadow siblings, twins she loses, and yet after she isn’t pregnant anymore he insists they need to get married. It is November 1972 and she is still 15 but she finds a way and then they are in Queens in front of the priest, a cousin of the guy who got Daddy his new job, with his family and both of their roommates. Grandma and Grandpa hear her given name for the first time when the priest says Do you . . . ?

We call this child marriage now; there’s a movement to ban it for good. New York signed its new law just last year. She waits three months to call her own parents. When are you coming home? Grandmother asks. I’m not, she says, I’m married. In the background, the Colonel says, Oh thank god. We don’t have to worry about her anymore. They don’t show up at the apartment to drag her home the next day. I will never understand this. They send a gift instead: a poppy-red percolator and an iron. Their marriage certificate gets bronzed, as if its weight will anchor them until my brother and I arrive two and four years later, respectively. She ages herself backwards, slowly, to meet herself finally on my birth certificate, and things are what they are until they are not.

There’s a time in every story when a choice changes everything; a moment in hindsight becomes a beginning. The choice you focus on determines whose story you’re going to tell. I am alive because my father met a girl in a bar and sang her songs, recited her poems, talked about the books he had read and the places he’d been and was admired for it. My mother met a man in a bar and drew herself up to her full height. She told the world a story about herself. Nobody knew the whole truth of that moment, or else nobody cared. It was a different time, we say now about men and girls and then and now and the choices we linger on and the choices we forget or forgive. But when has it not been dangerous to walk through the world as a girl, even with a knife and the lessons of hitchhiking written in blood? At 15 I was yet a year away from primping for Prom, not hitchhiking to Seattle where nobody knew me. I wanted to know interesting people, but I knew that could wait; this is one of her triumphs. Also, I knew she would have found me, would never have stopped trying to bring me home.

This was supposed to be a story about my father, but there is no story anymore but hers and everything that leads up to it and everything that comes after. Your father, oh, he loved you kids, she tells me. I’ve never seen anyone as in love with anyone as he was with you and your brother. Today we don’t talk about later, and everything that leads up to his death when I am not quite six. Today we linger in the beginning, when the story is new in some ways and in others has been in motion for years — two, 10, 15, 36, depending on where your eye is drawn. I can’t ask him to tell me the story of that night and what came after, about how quickly he decided to live with her truth and make it his, too. I can’t tell it as well as he would have, she says, and here she laughs gently, but then again, you know, he lied a lot. It is strange for her, to talk about this girl who moved so boldly through the city so long ago, but she indulges me because that is love, and surviving this story is also her triumph.

One day, sometime after Daddy has been gone for years, his old roommate calls her to reminisce, the sounds of his annual Woodstock reunion party in full swing behind him. Alexis, he says to her, we were all just talking about that time you were on stage when Richie Havens was singing “Here Comes the Sun” and you were dancing, and you were wearing that one dress, you remember? And Mom, she just laughs. I wasn’t at Woodstock. I was only 12, are you nuts? This is a fond family joke. That was some other girl on that stage dancing in some other dress. But I see now how just like that, men can absorb a girl into their story, somehow convinced of her inevitability, as if she had always been there dancing on the edge of their lives, waiting for the right night in the right bar, the one moment that would make her permanent, part of someone else’s record. They have their own stories. My father had his. This one is hers alone.