Black women are the resistance: Statue of Liberty climber follows a familiar path 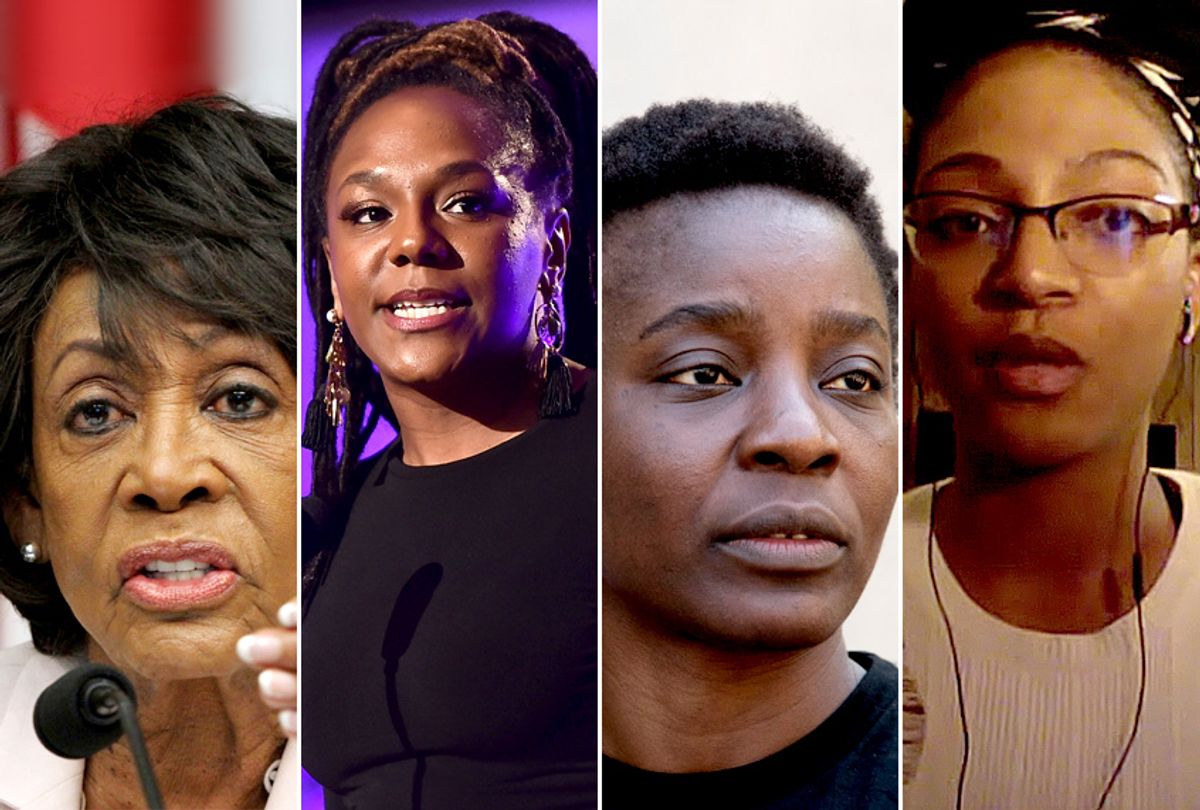 The image of activist Therese Patricia Okoumou, 44, nestled into the mint green foot of Lady Liberty, recalls the time when filmmaker and activist Bree Newsome, another African-American woman and activist, climbed a 30-foot South Carolina flagpole in 2015 to remove the Confederate flag from state grounds. The flag, originally raised in opposition to the Civil Rights Movement in 1961, was infected with new and old meaning when white supremacist Dylann Roof murdered nine black churchgoers in Charleston that year. It was a symbol he embraced.

For more than three hours on the Fourth of July, Okoumou refused to descend the Statue of Liberty, telling police she would end her protest only when all the migrant children separated from their families at the U.S.-Mexico border and caged in detention facilities are released.

The two moments, both helmed by black women and anchored by their bodies in peaceful protest, recalls a third example: the image of 28-year-old Ieshia Evans at a Black Lives Matter protest in Baton Rouge in 2016. In that photo, Evans, a young black woman, dressed in a long, flowing dress, is about to be handcuffed by two policemen in full riot gear. She stands assured, calm and composed in her resistance.

"The two halves of the image are a study in contrast — on the left, the apparatus of the police state decked out in body armor that seems to extend infinitely in both directions; on the right, a single African-American woman who appears to be knocking two officers off-balance with the power of her gaze," my colleague, Scott Eric Kaufman wrote.

The efforts waged by all three women fit into the larger resistance movements taking place in recent years, among them Black Lives Matter, immigrant rights (Abolish ICE) and #MeToo, and point to the central role black women have undertaken in all of them. Beyond being on the front lines fighting against racist policy, patriarchy and misogyny, xenophobia and systematic anti-blackness, such visibility has also meant unlimited scrutiny and risks to their safety in the form of threats of violence, surveillance and detainment.

A recent example is the work of Congresswoman Maxine Waters, D-Calif. In light of press secretary Sarah Huckabee Sanders being refused service at a Virginia restaurant, the politician encouraged people to confront Trump officials whenever they come in contact with them. The administration's policies on immigration, she argued, should never be treated as normal.

Waters was then attacked from politicians, from both sides of the aisle, who incorrectly categorized her words as an incitement of violence, somehow removing any onus from the White House for enacting such a barbaric policy in the first place. The president warned her on Twitter, "Be careful what you wish for Max!" and since then, Waters said she has faced an onslaught of death threats, which she addressed head-on during an immigration rally in Los Angeles:

While Waters has canceled at least two scheduled appearances due to death threats, she has not backed down and her words and actions emphasize an unrelenting commitment to the oppressed, even in the face of grave personal danger. She epitomizes resilience and her vocalness has deep roots.

As Rebecca Traister from New York Magazine reported, in 1992, as a first-term congresswoman, and after the acquittal of the four white cops who were recorded brutally beating Rodney King in Los Angeles, Waters refused to castigate community members for the protests that followed.

Not surprisingly, 200 black women leaders and some allies have come together to Waters' defense, signing a scathing letter to Senate Minority Leader Chuck Schumer and House Minority Leader Nancy Pelosi, both of whom unfairly framed and condemned Waters' remarks. The letter centers both the disrespect of Waters and the larger disparagement of black women, who signees remind them, are the Democrats' most dependable base.

"We write to share our profound indignation and deep disappointment over your recent failure to protect Congresswoman Waters from unwarranted attacks from the Trump Administration and others in the GOP," the letter states. "Disparaging or failing to support Congresswoman Waters is an affront to her and Black women across the country and telegraphs a message that the Democratic Party can ill afford: that it does not respect Black women's leadership and political power and discounts the impact of Black women and millennial voters."

The letter added, "For Black women, who are the most loyal base of the Democratic Party and the Progressive Movement, Congresswoman Waters is our shero."

When another real-life superhero Bree Newsome grasped the Confederate flag in one hand, she can be heard shouting: "You come against me with hatred, oppression, and violence. I come against you in the name of God. This flag comes down today." Once on the ground, she was arrested and taken to jail.

But soon after, a bill was signed to remove the flag from the State Capitol permanently and since then, Confederate monuments have been at the center of national conversations and taken down all over the country.

Okoumou was arrested and taken into federal custody Wednesday. She is likely to face possible charges of trespassing, disorderly conduct and interfering with government functions. But her protest, which she said she would endure until "all the children are released," on Independence Day, atop one of America's most cherished monuments, amplified the demonstrations that have been taking place all over the country. It makes you wonder if in the future, her calls to abolish ICE, to release all detained immigrant children and to enact humane immigration policies will be listened to and implemented.

Now, it's not new that black women have lead and grounded resistance movements of all kinds, advocating for a vision of liberation that is intersectional in scope. Elaine Brown took over leadership of the Black Panther Party when Huey Newton fled to Cuba and worked to include the issues that black women faced and encourage black women participation in what had been a male-dominated and centered organization. Trinidadian-born activist Claudia Jones was a leader in the international Communist movement and fought for the Communist Party to undertake racial and gendered oppression as well as economic, penning the groundbreaking essay in 1949, "An End to the Neglect of the Problems of the Negro Woman!"

But the activism and organizing work of black women has a history of co-option and erasure by the media, by politicians, and even by their fellow male activists. However, there is evidence that there has been some progress made in the recognition of black women's contributions and leadership in resistance movements as of late.

The black women founders of Black Lives Matter, Alicia Garza, Opal Tometi and Patrisse Cullors, are much more widely known than a few years ago, as is the origins of #MeToo by activist Tarana Burke. However, it was the work of black women on social media who corrected the media outlets attributing the foundation of #MeToo to Alyssa Milano and other famous white women in Hollywood.

Certainly, the fight doesn't end there. It's not just the erasure of black women's contributions, but the neglect of violence against black women, be it via state violence (police and carceral), domestic, sexual or political. And it is an uphill battle.

One of the most famous and widely-shared images from the Women's March in 2016, one day after Donald Trump's inauguration, was Angela Peoples, sucking on a lollipop and carrying the sobering sign, "Don’t Forget, White Women Voted for Trump." In the backdrop, are white women in pussy hats taking selfies.

It was a message about the 53 percent of white women who contributed to Trump's victory. And it's a message still being felt as the nation approaches pivotal midterms this fall and white woman continue to pose threats to the blue wave, many are fighting for and banking on.

The numbers don’t lie: For many white women, it’s racial identity, not gender or party, that guides their choices in the voting booth. As my sign pointed out, in 2016 more than half of white female voters chose Mr. Trump. A year later, in Virginia, 51 percent of white women voted for the Republican Ed Gillespie, who lost after running an anti-immigrant, white-nationalist-sympathizing, Steve Bannon-backed campaign for governor.

She added that the acknowledgment of the work of black women after Roy Moore's defeat in the special election in Alabama signaled a "small step in the right direction. But we don’t need thanks," Peoples continued. "We need you to get out of the way and follow our lead."

Me Too movement founder Tarana Burke

She speaks on the future of the movement and the power of women as an organizing collective.