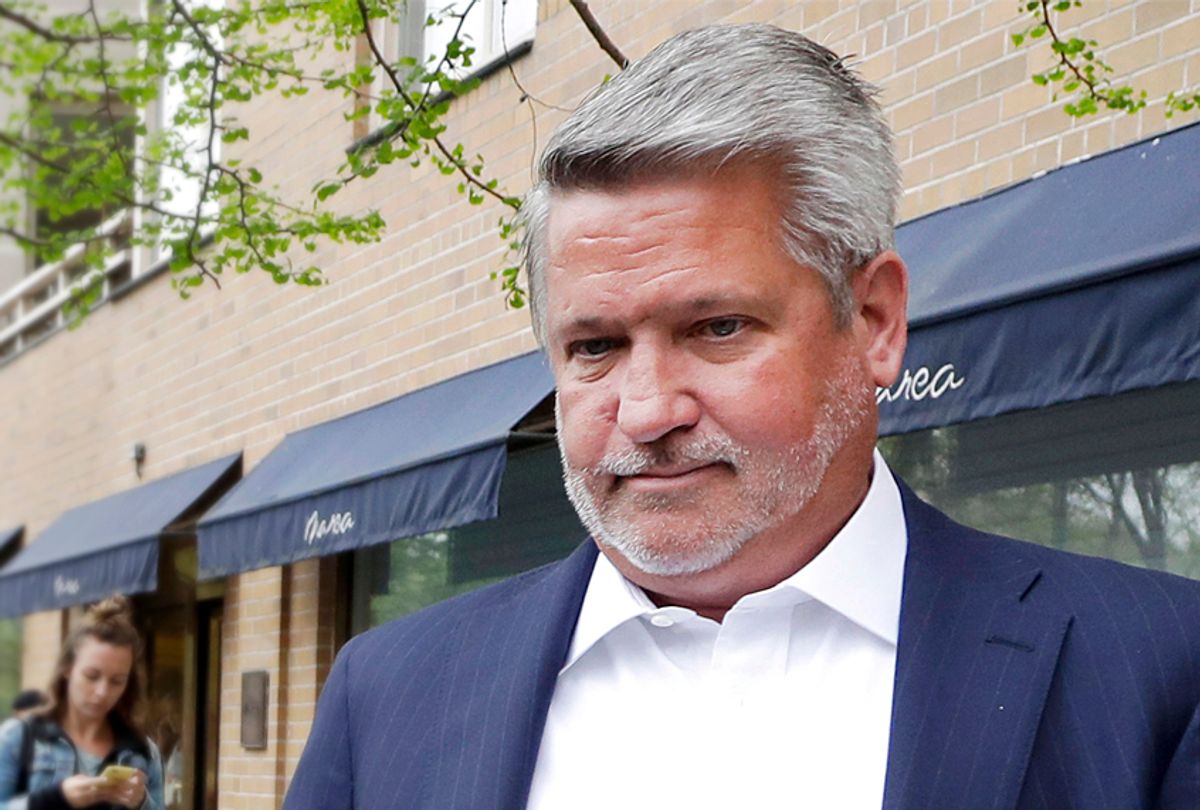 Bill Shine, the former Fox News executive who was ousted from the network in May 2017 after being named in multiple lawsuits for his handling of the network's mounting sexual harassment scandals against on-air talent and Fox News executives, has officially accepted a gig in the White House, the administration announced on Thursday. Shine is expected to take on the job of White House communications director, the Trump administration's sixth in 18 months. The position has been vacant since Hope Hicks' departure in March.

The first public relations challenge Shine may be tasked with squashing is the growing controversy around his own hiring.

Shine, who had a reputation as being the "henchman" of late Fox News chairman Roger Ailes, could reprise his old job with his new boss. The president himself has been accused of sexual harassment and assault by multiple women and has defended Ailes and former Fox News host Bill O'Reilly amid allegations against them. Just hours after Shine's hiring became official, Trump made a joke about the "Me Too" movement at a rally in Montana.

The news of Shine's West Wing appointment also came on the eve of the second anniversary of the lawsuit filed by Ailes accuser and former Fox News anchor Gretchen Carlson.

"This …. on the 2 year anniversary eve of filing my harassment lawsuit; giving women a voice, letting them know you can be believed, launching a national movement to stand up and speak up and say enough is enough," Carlson tweeted on Thursday. She added, "Life … works in mysterious ways. #BeFierce."

As mentioned in her tweet, Carlson filed a bombshell sexual harassment and retaliation lawsuit against Fox News and Ailes in July 2016, alleging she was fired because she refused his sexual advances and suffered gender discrimination from "Fox & Friends" co-host Steve Doosy. According to the complaint, Ailes allegedly told her, "I think you and I should have had a sexual relationship a long time ago and then you'd be good and better and I'd be good and better. Sometimes, problems are easier to solve that way."

Carlson also called out Darla Shine, the wife of the newly minted White House communications chief Bill Shine, who, following her husband's ascension to the White House, has come under intense scrutiny for discrediting sexual assault accusers, spreading anti-vaccination conspiracy theories and making racially-charged comments on her social media pages. According to the Hollywood Reporter, Darla "has long used her personal Twitter account to attack some of the women who have accused him of turning a blind eye to sexual harassment at his former company."

"Oh and Darla got to spew crap about me without any repercussions but women who are harassed and forced into secret arbitration or settlements can’t say s—-. Go figure," Carlson wrote on Twitter in response to a Huffington Post story that said Darla had tweeted that former Fox News host Megyn Kelly Kelly's accusations against the late Roger Ailes weren't credible and that his harassment amounted only to an "awkward hug."

Kelly also slammed Darla in a tweet. "To Darla Shine — yes, it was indeed an 'awkward hug' between me (then a 2d year reporter) & my then-boss, the CEO Ailes, especially when in his locked office he tried to make out w/me & then demanded to know when my contract was up after I shoved him off," she wrote.

According to The Daily Beast, Bill Shine has been "named in at least three lawsuits against the network alleging that he helped facilitate — and, in some cases, actively conceal — a climate of workplace sexual harassment." He has been nicknamed "The Butler" by many inside and outside the cable network, according to the news outlet, and is "frequently described as having served as Ailes' 'henchman,' 'enforcer,' and 'executioner' at Fox News." Shine is known for protecting other alleged harassers at Fox like Bill O'Reilly, covering up their behavior and dismissing women's complaints against them. Shine has denied any wrongdoing.

In a lawsuit filed by Former Fox News contributor Julie Roginsky, Shine was "accused of failing to investigate the numerous sexual-harassment accusations against Ailes that were brought before him, and of engaging in 'intentional discrimination, harassment and retaliation with malice and reckless indifference' to Roginsky's own claims of sexual harassment against Ailes," the Daily Beast reports.

Andrea Tantaros, a former Fox News host, filed litigation shortly after Roginsky's, alleging that the network illegally spied on her and used the information to "emotionally torture" her. In the complaint, Tantaros accuses Shine, as well as three other Fox News executives, of having surveilled her phone and email communications to "intimidate, terrorize, and crush her through an endless stream of lewd, offensive, and career-damaging social media posts, blog entries and commentary" as retaliation for the complaint, according to the Daily Beast. Tantaros claims in the lawsuit that Ailes and disgraced Fox News host Bill O'Reilly had sexually harassed her.

Former Fox News booking director Laurie Luhn, who has accused Ailes of perennial sexual harassment spanning more than two decades, has accused Shine of enabling her abusive relationship with the Fox chief. In an explosive interview with New York magazine, Luhn claimed Shine arranged her travel to meet Ailes for secret meetings at Ailes request — all under the disguise of "booking meetings." She also revealed that Shine recommended a mental-health professional to her for treating the mental breakdowns she suffered as a result of Ailes' long-term abuse and mistreatment, and that Shine even called her father several times in an effort to have her commit to a mental facility against her will.

"Bill Shine sent me to a San Antonio psychiatrist," Luhn then wrote of the experience in a letter to Ailes. "It was a true nightmare. What I really needed was sleep, and maybe some sort of counseling. Instead, what I got was a doctor who immediately prescribed very dangerous, serious meds. Those drugs made me hallucinate for over a year."

Despite the allegations in the lawsuits against Shine, it seems Fox News primetime host Sean Hannity, a close friend and adviser to President Trump, couldn't be happier about Shine's new gig.

Hannity added, "As far as what I know about it, if I did know anything, it's none of your business anyway," seemingly alluding to the claims of concealment against Shine.

Bill O'Reilly, who, like Shine, also left the network in disgrace, also endorsed the former Fox News co-president in a tweet.

"If Bill Shine gets the job of White House communications director, that will be good for the country," O'Reilly wrote. "Shine is smart and honest. But the president has to listen to him!"

And Eric Bolling, the former Fox News host who was fired after an investigation into claims that he sent lewd pictures to current and former colleagues, described Shine as "a great hire for the Admin & for America." He added that he is "a strong family man from a law enforcement family. Well respected by all" and that he also has been "pro-Trump from day #1."

In addition to informal advisers like Hannity, Trump "has also made a point of filling his administration with former Fox News staffers, on-air personalities and executives like Shine," the Daily Beast notes. "Former Fox News anchor Heather Nauert currently serves as the spokesperson for the State Department; longtime Fox News commentator John Bolton serves as Trump's national security adviser; Fox News commentator Mercedes Schlapp, currently the White House’s director of strategic communications, was considered a potential frontrunner for the job given to Shine," according to the news organization.

Besides his record of hiring former Fox News staffers, Trump has made a point of defending sexual harassment accusers. Earlier this year, when White House Staff Secretary Rob Porter's was accused of physical and emotional abuse by several former partners, Trump lamented a perceived lack of "due process." And despite the allegations against Porter, Trump recently told told some advisers he hopes Porter returns to work in the West Wing. The president also endorsed the far-right former judge Roy Moore, accused of child molestation, in his bid for a U.S. Senate seat in Alabama.