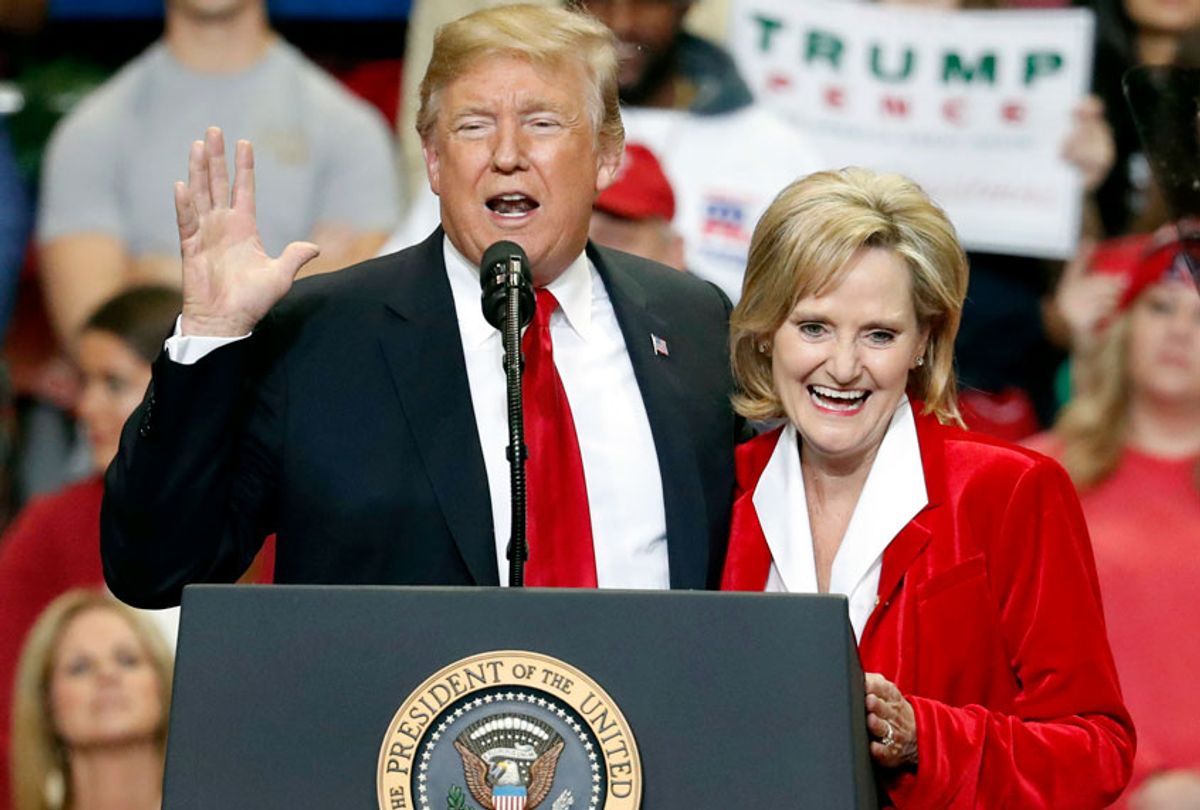 With Mississippi voters heading to the polls again to cast a ballot in a tumultuous special election for U.S. Senate, President Donald Trump swooped into the state to boost Sen. Cindy Hyde-Smith, the embattled Republican who has faced mounting backlash over racially divisive incidents that surfaced in the weeks following the general election.

Hyde-Smith faces a runoff against Democrat Mike Espy, a former U.S. secretary of agriculture, in the race to fill longtime Republican Sen. Thad Cochran's seat. (Hyde-Smith was appointed to the post by Mississippi's governor after Cochran's resignation, but now faces an election to fill the remainder of his term.) Because neither Hyde-Smith or Espy garnered more than 50 percent of the vote on Election Day — both received slightly more than 40 percent — the race advanced to a runoff on Nov. 27, which polling had predicated. Tuesday's race marks the last Senate race of the 2018 midterm election cycle.

By staging two campaign rallies — the first in Tupelo and the second in Biloxi — and one roundtable event on the eve of the runoff election, Trump dove headfirst into a race in a state divided by race and deeply marred by its history of lynchings and segregation — and highlighted the uncertain condition of Hyde-Smith's candidacy.

By offering his unabashed endorsement of Hyde-Smith, Trump is effectively backing a politician whose apparent nostalgia for Confederate tradition and history of racially insensitive remarks have stirred painful memories of Mississippi's long and dark past. Hyde-Smith has said she would sit "in the front row" at a "public hanging," sported Confederate military gear and graduated from an all-white private school -- sometimes known as a "segregation academy" -- while sending her daughter to another. She also co-sponsored a resolution in Mississippi's state Senate in 2007 that praised a Confederate soldier for his efforts to "defend his homeland," pushed a "revisionist view of the Civil War" and said voting should be "a little more difficult" for "liberal folks."

In Tupelo on Monday, however, Trump did not mention Hyde-Smith's "public hanging" remark, which has caused the Republican senator's financial resources to dwindle in recent days, as Walmart, Major League Baseball, AT&T and other corporate entities have asked her to return campaign donations in the days after her comments went viral. Instead, Trump stuck to the playbook he used in his nationwide pre-midterm tour. He criticized the ongoing federal investigation into his presidential campaign's alleged collusion with Russia during the 2016 election, bragged about boosting the economy and warned of the dangers of illegal immigration.

"We don't want those people in Mississippi," Trump said to cheers and chants of "Build the wall!"

He also defended Hyde-Smith several times, telling reporters that "her heart is good," and pointed out that she publicly apologized for her "public hanging" comment — a remark she maintains was made in jest. (“You know, for anyone that was offended by my comments, I certainly apologize" is how the senator voiced her apology during the Mississippi Senate debate.)

The president also labeled Tuesday's runoff "one of the most important elections of your lives" and called Hyde-Smith a "truly incredible leader and tireless champion," who would bolster his agenda in the upper chamber of Congress if she prevails on Tuesday. "She votes to make America great again and she votes for America first," Trump said, invoking two of his slogans. "Cindy is so important, so respected. We've got to send her back."

Hyde-Smith briefly joined Trump on stage on Monday to thank him for his support and to tout her conservative ideology. She vowed to lower taxes, support the military and law enforcement and touted her support for "pro-life issues."

Trump previously attacked Hyde-Smith's opponent, Espy, as "far left," and argued that Espy would work to protect undocumented immigrants instead of Mississippi residents. "How does he fit in with Mississippi?" Trump asked in Tupelo, saying later in Biloxi that "a vote for Espy is a vote for the Democrat agenda of socialism and open borders."

As Hyde-Smith has attempted to push back against the political fallout from a disastrous stretch of her Senate campaign, which seemed like a sure Republican win until she imperiled her own prospects, her polling advantage over Espy seems to have dwindled along with her campaign funds.

While Hyde-Smith is surely still the favorite, Democrats have legitimate hopes of flipping one more red seat in the last Senate race of the 2018 midterm election cycle. Espy was initially considered a long-shot candidate, but the same was true in last year's special election race in Alabama, when Democrat Doug Jones pulled off a stunning upset over Roy Moore — a controversial Republican former judge who was damaged by multiple allegations of sexual misconduct.

While the results of Tuesday's runoff will not shift the balance of power in the Senate -- Republicans will maintain the majority even if Hyde-Smith loses -- it would reduce the GOP's Senate advantage to 52-48 and would mean they had only gained one Senate seat with an extremely favorable map. Republicans defeated Democratic incumbents in Florida, Indiana, Missouri and North Dakota, but lost seats in Arizona and Nevada.

Strong Democratic turnout — especially among black voters — and an embattled Republican candidate lifted Jones to his surprise victory in Alabama. Espy hopes for a similar outcome in Mississippi, where 35 percent of the electorate is African-American.

Chances of a Democratic victory in Mississippi — a state Donald Trump won by nearly 18 percentage points in the 2016 election and whose senior senator, Republican Roger Wicker, was re-elected by nearly 20 points earlier this month — still appear remote. Mississippi has not elected a Democrat to the Senate since 1982.