Whitaker cleared to oversee Mueller probe, but an ethics adviser recommended he "step aside": report

"It means the top justice official in the country is ignoring the advice of the ethics lawyers," Adam Schiff says 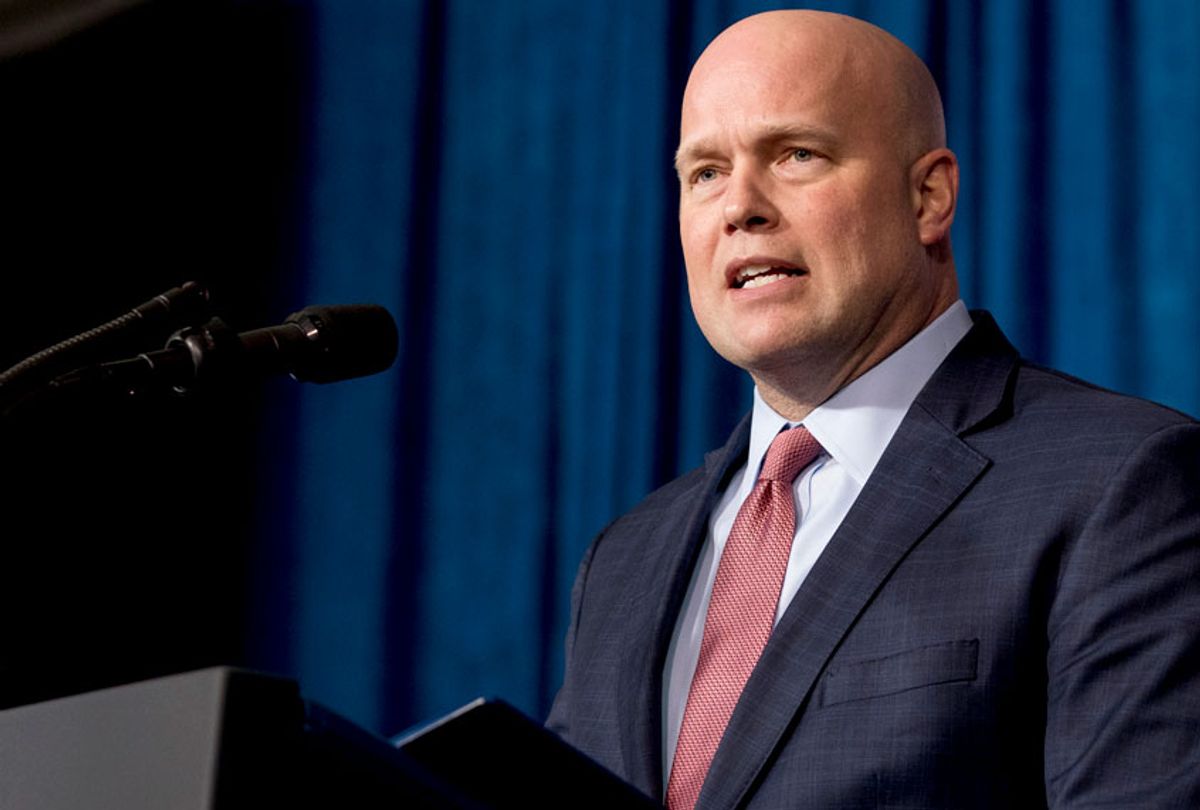 The Justice Department has concluded that acting attorney general Matt Whitaker did not have a legal rationale to recuse himself from overseeing the special counsel Robert Mueller's investigation into allegations of collusion between Donald Trump's 2016 presidential campaign and the Russian government, which Whitaker previously railed against in several op-eds, according to NBC News.

"A senior Justice Department official told NBC News Thursday that Whitaker was never required to seek formal ethics advice and did not do so," Pete Williams reports. "He had no financial, familial or fiduciary ties to any subject of the investigation, the official said." Nonetheless, Whitaker was advised to step aside.

Whitaker reportedly began overseeing Mueller's probe not long after landing the job in early November after Trump fired Jeff Sessions, who had been publicly scorched by the president ever since he recused himself from Mueller's investigation. Sessions stepped aside from overseeing the probe in March 2017, citing his own role in Trump's campaign. At one point, Trump even tried to pressure Sessions to reverse his recusal but Sessions refused.

Rep. Adam Schiff (D-Calif.), the incoming House Intelligence Committee chairman, slammed Whitaker's oversight as "a pretty intolerable situation" during an appearance on CNN's "The Situation Room."  Democrats in the House and the Senate have already called on Whitaker to recuse himself from overseeing the investigation.

"If it is true that the ethics lawyers recommended that he recuse himself and he is nonetheless refusing, it means the top justice official in the country is ignoring the advice of the ethics lawyers," Schiff told Wolf Blitzer. "That is a pretty intolerable situation, particularly when it involves an issue that was the very reason why he got the job – and that is he had been auditioning with comments about he could silently and out of the public view cripple the Mueller investigation"

However, the primary committee that would be looking into the issue would be the House Judiciary Committee. "They have already indicated that Whitaker is going to be one of the first witnesses to come in," Schiff added.

Following Sessions' recusal, Deputy Attorney General Rod Rosenstein stepped in to oversee the probe and his office is still handling the investigation on a day-to-day basis. CNN reports that it is not clear when ethics officials cleared Whitaker to oversee the probe and that he had not stepped aside from participating in developments in the investigation.  Whitaker, for example, was informed ahead of time that Trump's former personal lawyer Michael Cohen would plead guilty to lying to Congress last year about his contacts with Russia during the 2016 presidential campaign, specifically about an aborted plan to build a Trump Tower in Moscow.

Trump announced his intention to nominate William Barr as attorney general on a permanent basis earlier this month. Barr, who supported Trump during his presidential campaign, previously served as attorney general under late President George H.W. Bush, a Republican, from 1991 to 1993. If confirmed, Barr would succeed Whitaker as the nation's top law enforcement official, though it was recently revealed that he criticized Mueller's investigation in an "unsolicited memo" to the Justice Department earlier this year, which has raised concerns among some lawmakers. Barr also told The Hill last year that "leaks" from the special counsel's office "raise questions as to whether there is an agenda" and suggested that Mueller's team was not politically "balanced," because some members had made political contributions to Democratic candidates. Notably, Mueller, who is leading the probe, is a member of the Republican Party.

White House officials have contended that Barr would be swiftly appointed to the post by a GOP-controlled Senate. He is expected to be formally nominated early next month, with a hearing shortly after.