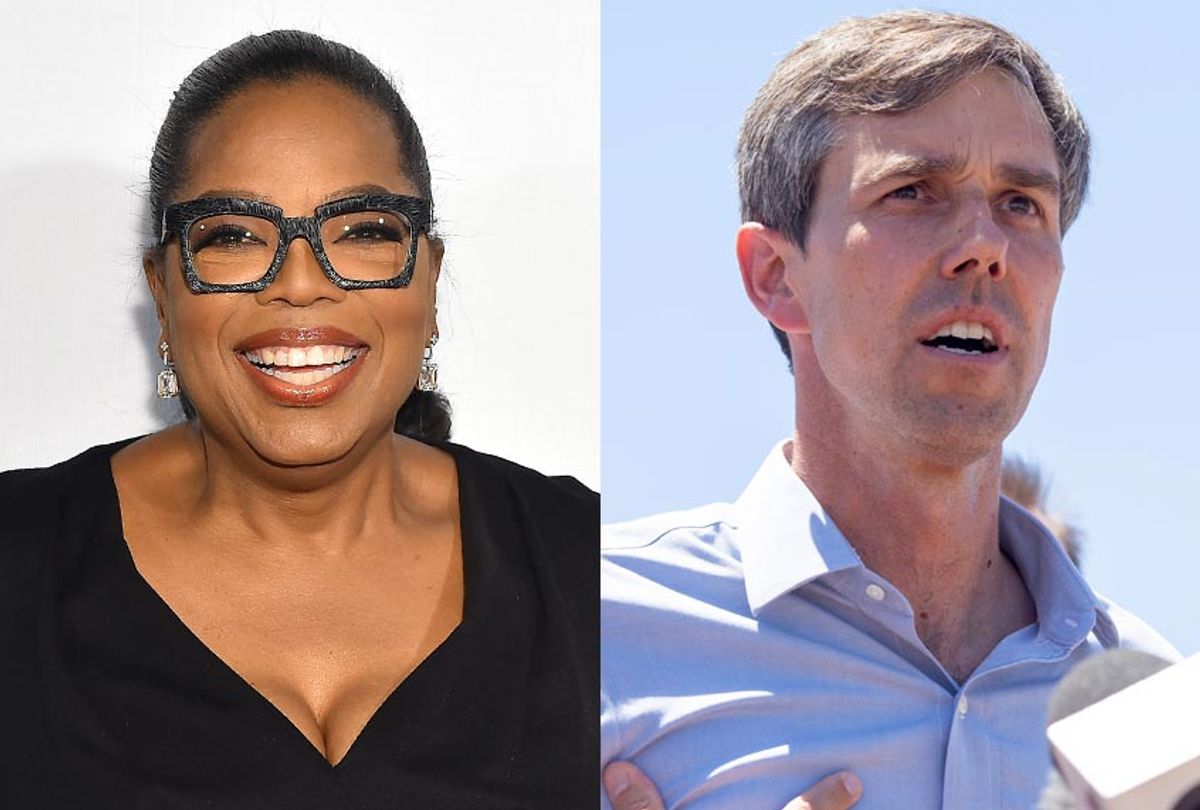 Oprah Winfrey will interview former Rep. Beto O'Rourke, the Texas Democrat who is reportedly becoming more serious by the day about forging a White House bid in 2020, during a live event in New York City. The Feb. 5, titled "Oprah's  SuperSoul Conversations from Times Square" will also feature Bradley Cooper, Michael B. Jordan and Melinda Gates.

"In one-on-one conversations, Winfrey will discuss how each of the guests created an impact and shifted the conversation in their respective fields of entertainment, politics and culture in the last year," the event listing reads.

O'Rourke has emerged as a top contender for 2020. He raised a staggering $38 million in the third quarter of his Senate campaign — the most of any candidate in U.S. history — and his closer-than-expected finish to Sen. Ted Cruz (R-Texas) during the 2018 midterm election cycle, as well as his post-election missives, have fueled interest from Democratic donors and the highest levels of the party that the right candidate could turn some purple or red states blue in the Electoral College battle.

Although O'Rourke said during his Senate race that he did not have Oval Office aspirations, he admitted late last month that his position had changed from what he said on the campaign trail and that he and his wife had "made a decision not to rule anything out."  By signaling that he is even open to throwing his hat in the ring for 2020, however, O'Rourke has continued to generate buzz and speculation in the sprawling field of prospective Democratic candidates vying to take on President Donald Trump.

And Democratic activists are beginning to lay campaign groundwork for O'Rourke if he decides to throw his hat in the ring for 2020. O'Rourke supporters and organizers are "ratcheting up their efforts in Iowa, organizing 'Drat Beto' meetings for next week in the first-in-the-nation caucus state," Politico reports.

"Our goal is to build a grassroots volunteer base that Beto can access if he decides to run," Will Herberich, a New England-based strategist co-chairing the group pushing the Iowa effort, told the news outlet. "There are, as we've seen already, thousands of people from every state who are excited about the idea of Beto running for president. So, our mission is just to find ways to activate those people so they can begin organizing their communities."

Even former President Barack Obama appears eager about the possibility of O'Rourke 2020. Obama reportedly met with O'Rourke at his post-presidency offices in Washington last month, amid pressure from Obama aides eager for O'Rourke to seize upon his high political stock and fundraising prowess following his nationally-watched campaign against Cruz.

Obama, speaking to his former White House adviser David Axelrod on his podcast last month, also called O'Rourke "an impressive young man who ran a terrific race in Texas" and drew comparisons between O'Rourke and himself.

O'Rourke is just one of many names being floated as a potential challenger to President Donald Trump in what is expected to be a very crowded Democratic field in 2020. Should O'Rourke decide to run, he would likely face competition for the Democratic nomination from Sens. Cory Booker (D-N.J.), Bernie Sanders (I-VT.), Kamala Harris (D-Calif.) and Elizabeth Warren (D-Mass.).

At least two former Obama administration alumni are like to throw their names, as well. Former Vice President Joe Biden has also hinted that he is weighing a White House bid, while former Secretary of State John Kerry recently alluded to mounting a presidential bid — and these names are far from the complete list.

A straw poll from the progressive group MoveOn.org released in December revealed O'Rourke is the leading Democratic contender for the 2020 presidential race, with 15.6 percent of responders supporting his candidacy. He was followed by Biden with 14.9 percent, Sanders with 13.1 percent, Harris with 10.0 percent and Warren with 6.4 percent.