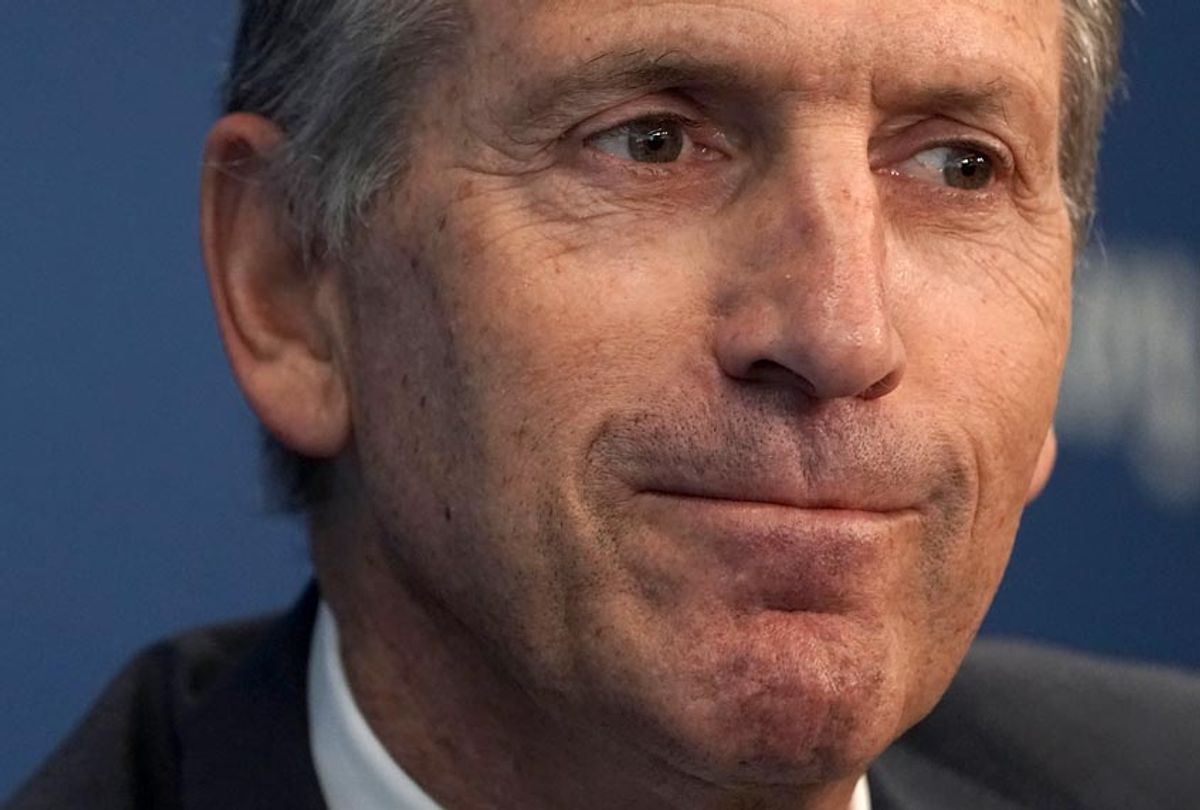 Howard Schultz, the former Starbucks CEO, announced on Sunday that he is considering mounting a bid for president in 2020 as a "centrist independent" — and he received a chilly reception online from social media users and political observers, Democrats included.

In a "60 Minutes" interview with CBS' Scott Pelley that aired on Sunday, Schultz said, "I am seriously thinking of running for president. I will run as a centrist independent outside of the two party system."

"We're living at a most fragile time: not only the fact that this president is not qualified to be the president but the fact that both parties are consistently not doing what's necessary on behalf of the American people and are engaged every single day in revenge politics," he added.

Schultz, who describes himself as a "lifelong Democrat," cited the mounting national debt as a "reckless example not only of Republicans, but Democrats as well, as a reckless failure of their constitutional responsibility."

Schultz stepped down as chairman and CEO of Starbucks last year, and said at the time that he was exploring what he could do to best serve America. Hours before the "60 Minutes" interview aired, Schultz sent his first message on Twitter, where he has had an account since September 2012.

"It feels good to be here. My hope is to share my truth, listen to yours, build trust, and focus on things that can make us better," he wrote on the social media site.

Schultz's tweet came under intense scrutiny online as Twitter users expressed concern over the hypothesis that his potential third-party candidacy could help re-elect Trump. "Howard, I like your coffee, but please don't do this," Rep. David Cicilline (D-R.I.) begged Schultz on Twitter. "You're not going to win. You're just going to make it easier for @realDonaldTrump to win."

"Our nation faces a serious crisis due to the actions of Donald Trump, and you would split the vote against him," Renato Mariotti, a former federal prosecutor and CNN legal analyst, added.

One Ivy League professor even provided some historical context. "The only thing you'll accomplish by running for president as a centrist independent is helping re-elect Donald Trump," Princeton historian Kevin Kruse wrote.

And those were some of the more polite reactions. Other social media accounts slammed Schultz's potential move as nothing more than a "vanity project."

Several other Democrats also expressed concern over Schultz's potential presidential bid, including former secretary of Housing and Urban Development Julián Castro, who is running for president in 2020.

Castro told CNN's Jake Tapper on "State of the Union" he is concerned that a Schultz candidacy would "provide Donald Trump with the best hope of getting re-elected" because the former Starbucks CEO could siphon off votes from the Democratic nominee. Castro said he does not think "that would be in the best interest of our country."

"I would suggest to Mr. Schultz to truly think about the negative impact that that might make," he added.

"If he enters the race, I will start a Starbucks boycott because I'm not giving a penny that will end up in the election coffers of a guy who will help Trump win," she added.

However, at least one boldface Democrat seemed completely unfazed by Schultz's viral announcement. "I guess I’m in the minority but I could care less if @HowardSchultz runs for president as an independent," Rep. Eric Swalwell (D-Calif.), who is rumored to also be pondering a 2020 run of his own, added. "If we do this right, our Democratic ideas and nominee will unite most Americans and replace @realDonaldTrump. Let’s focus on doing that."

Meanwhile, President Donald Trump on Monday slammed Schultz on Twitter, writing that he "doesn't have the 'guts' to run for President!"

"Watched him on @60Minutes last night and I agree with him that he is not the 'smartest person.'" Trump tweeted. "Besides, America already has that!" he added. "I only hope that Starbucks is still paying me their rent in Trump Tower!"

If Schultz enters the 2020 race, he will join what is expected to be a very crowded list of candidates that already includes California Sen. Kamala Harris, Hawaii Rep. Tulsi Gabbard and Julián Castro. In addition, Sens. Cory Booker (D-N.J.), Bernie Sanders (I-VT.) Kirsten Gillibrand (D-N.Y.) and Elizabeth Warren (D-Mass.) have noted their Oval Office ambitions. Former Vice President Joe Biden and former Rep. Beto O'Rourke, who fell short in his campaign against Republican Sen. Ted Cruz in the Texas Senate race during the 2018 midterm election cycle, have also hinted that they are weighing a White House bids — and these names are far from the complete list.