Noting that he grew up in a Brooklyn housing project, Schultz called himself "living proof of the American dream" 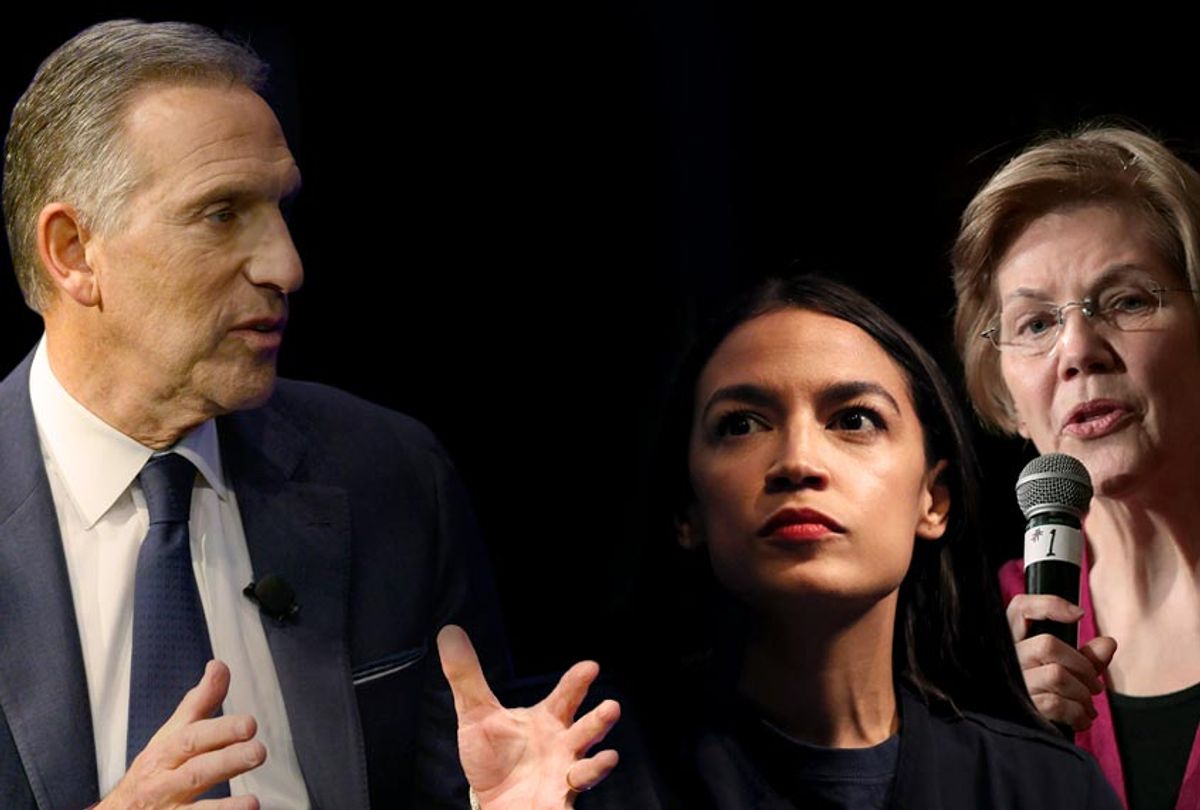 Howard Schultz, the former CEO of Starbucks who is weighing whether to mount a presidential bid in 2020 as a "centrist independent," took a jab at the health-care and tax policies of three of the Democratic Party's most ambitious progressive leaders — Rep. Alexandria Ocasio-Cortez (D-N.Y.) and Sens. Elizabeth Warren (D-Mass.) and Kamala Harris (D-Calif.) — during his media blitz early this week.

In an interview Tuesday on NPR's "Morning Edition," Schultz, the billionaire businessman who grew up in the Bayview Housing projects in the New York's Brooklyn borough, argued that Warren's plan to impose a two percent tax on Americans with more than $50 million in assets and a three percent tax on those with more than $1 billion in assets was "ridiculous." He accused the Massachusetts Democrat of crafting the economic proposal to get a "good headline," adding that "she knows for a fact it's not ever going to be passed."

Warren, who has formed an exploratory bid for president, fired back at Schultz on Twitter.

"What's 'ridiculous' is billionaires who think they can buy the presidency to keep the system rigged for themselves while opportunity slips away for everyone else," she wrote. "The top 0.1%, who'd pay my #UltraMillionaireTax, own about the same wealth as 90% of America. It's time for change."

The exchange came just a few hours after Schultz called Ocasio-Cortez "a bit misinformed" and took aim at her proposal of a 70 percent marginal tax rate on income earned above $10 million at the first stop of his book tour Monday night in New York.

Schultz gave credit to Ocasio-Cortez, who has emerged as a national progressive firebrand since her arrival on Capitol Hill earlier this month, for calling attention to issues of inequality but called her tax proposal "punitive" during a discussion at the launch of a book tour.

Schultz also condemned the views of Dan Riffle, a policy adviser to Ocasio-Cortez, as "un-American." Riffle has stated that he considers every billionaire to be a "policy failure."

"It's so un-American to think that way," Schultz said when presented with a quote from Riffle. Noting that he grew up in a housing project, Schultz called himself a "self-made" man who is "living proof of the American Dream."

"There is a problem that she has identified, but I think the way she's going about it, unfortunately – she's a bit misinformed," Schultz said. "The problem is we have significant inequality in the country. The problem is we have about 40 percent of American families that literally don't have $400 for a crisis. We have roughly five million young people – many African-American, Latino – that are not in school, not in work. And one of every six Americans are food-insecure every night."

Schultz also took aim at Harris, who has formally decided to throw her hat in the ring to challenge Trump in 2020, during appearances Tuesday on "CBS This Morning" on "The View." Schultz referred to a town hall hosted Monday night by CNN in which Harris fully embraced a "Medicare-for-all" single-payer health insurance system and said she would be willing to eliminate private insurance to make it happen.

"That is the kind of extreme policy that is not a policy that I agree with," Schultz said, adding that getting rid of private insurers would likely lead to major job cuts. "That's not correct. That's not American. What's next? What industry are we going to abolish next? The coffee industry?"

During his appearance on "The View," Schultz was also asked about a tweet by President Trump on Monday asserting that Schultz does not have the "guts" or the brains to run for president.

"I'm not responding to that childish behavior," Schultz said.

Schultz has not formally thrown his hat in the ring. In an interview that aired Sunday on "60 Minutes," he said he was "thinking of running for president" as a centrist independent because both the Republican and the Democratic Parties are "consistently not doing what's necessary on behalf of the American people and are engaged every single day in revenge politics." The former executive, who describes himself as a "lifelong Democrat," cited the mounting national debt as a "reckless example not only of Republicans, but Democrats as well, as a reckless failure of their constitutional responsibility."

Schultz stepped down as chairman and CEO of Starbucks last year, and said at the time that he was exploring what he could do to best serve America. If he enters the 2020 race, he will join what is expected to be a very crowded list of candidates that already formally includes Harris, Hawaii Rep. Tulsi Gabbard and former secretary of Housing and Urban Development Julián Castro. In addition to Warren, Sens. Cory Booker (D-N.J.), Bernie Sanders (I-VT.) and Kirsten Gillibrand (D-N.Y.) have noted their Oval Office ambitions. Former Vice President Joe Biden and former Rep. Beto O'Rourke, who fell short in his campaign against Republican Sen. Ted Cruz in the Texas Senate race during the 2018 midterm election cycle, have also hinted that they are weighing a White House bids — and these names are far from the complete list.