The best Oscars speeches of 2019: Hollywood is changing, slowly but surely

Wins from Regina King, Spike Lee and Ruth Carter show cultural shifts afoot, whether the Academy is ready or not 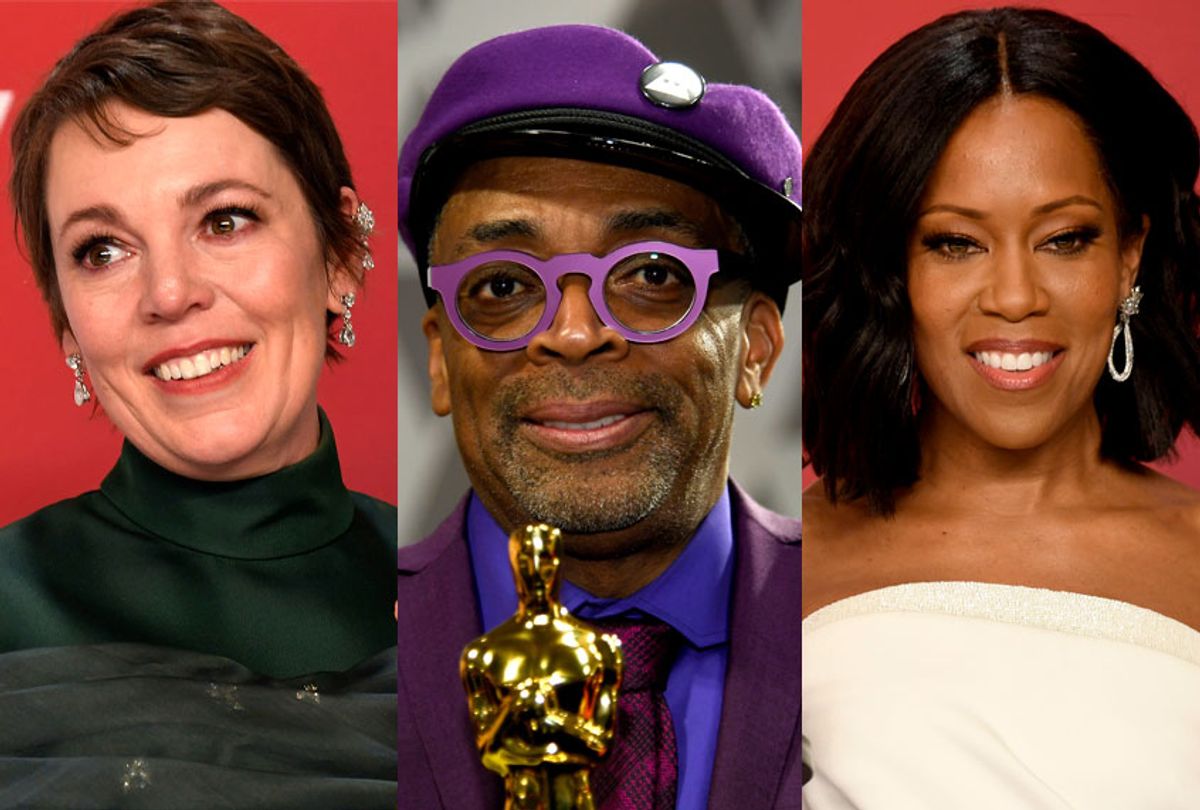 Undeniably, one of the most delightful moments of Sunday night's 91st Oscars was the seemingly off-the-cuff, yet sincere, and whimsical acceptance speech from Olivia Colman. The British actress won best actress for her starring role in "The Favourite."

Colman's victory was a huge surprise. After all, she was facing off against Glenn Close, a seven-time Oscar nominee, among other powerhouses. And while there was no pleasure in watching Close be thwarted again, Colman's comical, emotional speech infused the evening with so much joy — and to be clear, her performance was absolutely deserving of the top honor. It was also a significant win for an incredible historical film — that was otherwise ignored at the ceremony — telling a story where three women, and women only, are at the center.

The first-time nominee was in shock when her name was called and as she made her way to the stage. "It's genuinely quite stressful," Colman managed to utter through her tears. "This is hilarious. I've got an Oscar," she continued, her eyes drifting between the Oscar she held and the audience filled with Hollywood's brightest, a.k.a. her peers.

Colman spoke directly to Close. "You've been my idol for so long and this is not how I wanted it to be, and I think you're amazing and I love you very much," she declared. But Close's own charm eased away any tension, as she smiled adoringly at Colman and shook her head at any sort of concession.

Colman had the audience hollering at her natural and self-deprecating charisma (she seriously has a future in stand-up). She thanked her parents and hoped her kids were watching from home, because "this is not going to happen again." She acknowledged little girls all over the world with big dreams. She called out her husband for crying. It was truly a beautiful, touching and entertaining speech that made "The Favourite" fans fall in love with Colman and the cast even more, while inspiring everyone else to get on board. Colman ended her sermon with the final, important words: "Lady Gaga!"

Regina King, who won the award for best supporting actress for her dynamic, captivating performance in "If Beale Street Could Talk," also delivered a heartwarming speech at the top of the show. Like Colman, she was a first-time nominee.

Full of emotions and looking absolutely stunning in an all-white gown, King said, "To be standing here, representing one of the greatest artists of our time, James Baldwin — it's a little surreal." She acknowledged the dual genius of director Barry Jenkins, who poured love and support into the film and into her.

King thanked her mom, who was her date to the Oscars and addressed her fellow nominees, whom she called her "sisters in art." "It has been an honor to have my name even said with yours," she said. Many in the audience were moved to tears.

Veteran costume designer Ruth Carter was finally awarded best costume design for her role in "Black Panther." And in contrast to first-time nominees, Carter's speech reflected her decades of experience and lack of recognition from the Academy. "This has been a long time coming," she said, laughing unabashedly. "Spike Lee, thank you for my start. I hope this makes you proud," she continued. Her first design job was with Spike Lee's 1988 film "School Daze," and in a full circle moment for both, the director, who was in the audience, (and who would go on to win his first Oscar last night as well) stood up and cheered for Carter's momentous win.

"Marvel may have created the first black superhero, but through costume design we turned him into an African king," Carter added. "It’s been my life’s honor to create costumes. Thank you to the Academy. Thank you for honoring African royalty and the empowered way women can look and lead on screen." She is the first black artist ever to win the award.

After Carter's victory, another history-making moment took place when "Black Panther" production designer, Hannah Beachler along with set decorator Jay Hart, also won the Oscar. Beachler is the first black production designer to be nominated and to win the category. She delivered a passionate and poignant speech lauding the genius of director Ryan Coogler.

"I’m stronger because of Marvel, who gave me the opportunity to do my best, who supported the vision of this film," Beachler continued. "I give this strength to all of those who come next — to keep going, to never give up. And when you think it’s impossible, just remember to say this piece of advice I got from a very wise woman, 'I did my best, and my best is good enough.'"

The ingenuity and success of women, women of color, and artists of color in general at the Oscars culminated with the speech of Spike Lee. Presented by Samuel L. Jackson, whose excitement was uncontainable, the audience erupted in applause for the long overdue award, and Lee, dressed in a sharp purple suit and matching hat, leaped into Jackson's arms and pumped his fist in the air.

"Alright, do not turn that motherf**king clock on," Lee warned the Academy. After overlooking him for decades, they were going to let him talk — and they did. Reading off paper and visibly shaking, Lee spoke of America's founding, rooted in slavery and in genocide, before declaring the importance of the upcoming presidential election (for which President Trump tweeted an insulting message.) "Let's do the right thing!" Lee yelled out in conclusion.

The aforementioned speeches and subsequent first-time wins dovetail with the cultural shifts that have been taking place in Hollywood, thanks in part to the #MeToo movement, to #OscarsSoWhite and to a diverse, brilliant cohort of rising and veteran creatives demanding change in the industry. So while the Oscars cluelessly and yet unsurprisingly crowned the white savior film "Green Book" as this year's winner, the decision says more about the (ir)relevance of the Academy than it does about the state of Hollywood or its future.

The institutions of America have always shown fierce resistance to change, to racial and gender progress, and to a shifting of power. And yet, change has come in this country because of persistent organizing and fight back.

In this way, the wins of Colman, Lee, Carter, Bleacher and King add onto the commitments from many in Hollywood to hire more women directors, more people of color, and to tell diverse and truthful stories that complicate shallow and ahistorical narratives like "Green Book." The speeches and wins, amid the reckoning in Hollywood that's showing no signs of slowing down, signals that the gatekeepers in Hollywood will be torn down, whether the Academy is ready or not.