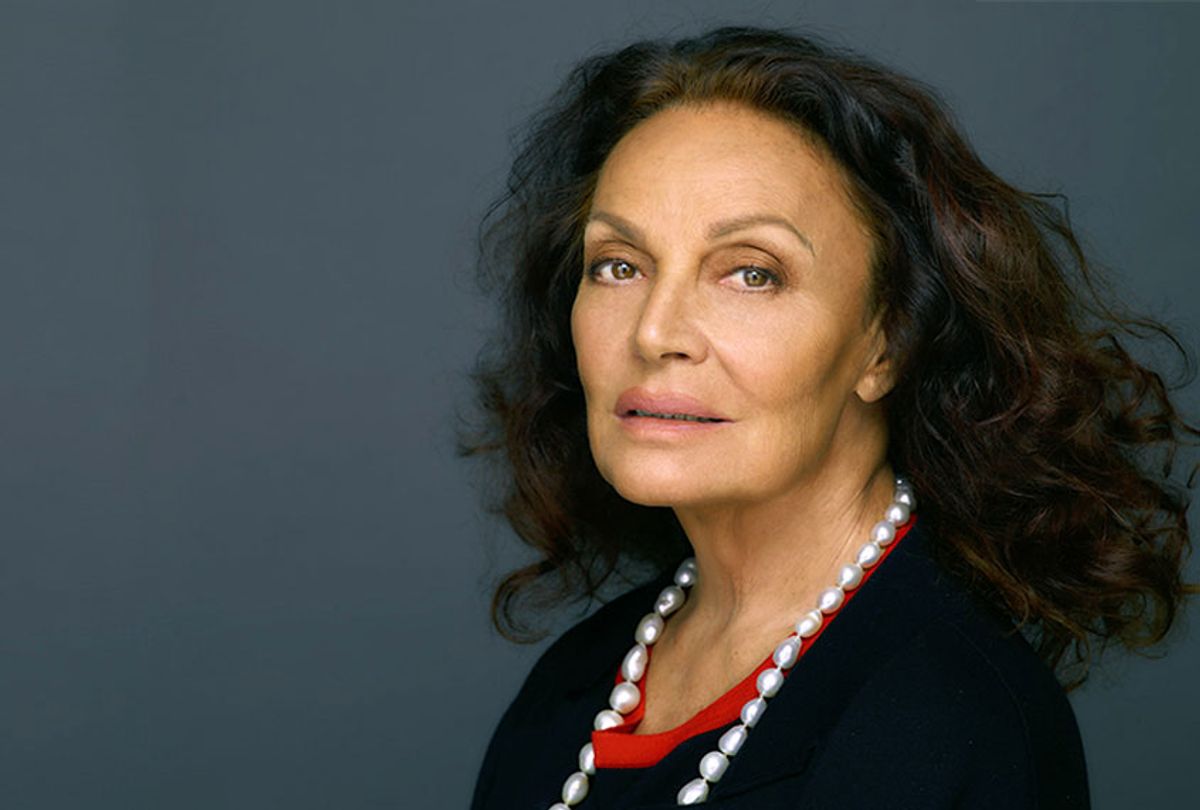 Blue jeans. Black leather jackets. Converse Chuck Taylors. And a kimono inspired frock designed to take a woman from from work to disco dancing. Somehow, certain garments transcend trends and remain eternally, effortlessly stylish. The iconic wrap dress made Diane von Furstenberg one of most influential designers in the world, but she says she'd rather be remembered as a role model than an icon. To that end, she's also an author, an entrepreneur and a philanthropist. This year, she's celebrating the 10th anniversary of the DVF Awards, as well the opening of a new museum dedicated to her famous goddaughter: the Statue of Liberty. The legendary style setter spoke recently with Salon about the women who inspire her, including the very, very tall ones.

What does it mean to be the godmother of the Statue of Liberty? Do you have to take her to ball games and Broadway shows?

When they asked me to go on the board of the Statue of Liberty and Ellis Island, I didn't want to. Then they came back and they made me read a book about the Statue of Liberty and all of those things. They wanted me to raise the money to build a museum on Liberty Island, which actually will open on May 15th. I said I would do that, but I would like to have the temporary title of the godmother. As the godmother of the Statue of Liberty, I have raised $100 million to build this museum. I have done a book with Rizzoli that also is coming in May, a documentary for HBO that will come the Fourth of July, and an app with Apple.

You represent in so many ways, the American dream of someone coming to this country and building something special, and then giving back. I want to talk about the DVF Awards. You do them in tandem with Women in the World. Every year, you honor extraordinary women, and the common bond is they have devoted themselves to elevating, lifting up, supporting other women. That's a very special breed.

Previous recipients have included Jane Goodall and Gabby Giffords. On this year's roster because are really special, special women. I want to start with the big one, Anita Hill. There is a generation that I think discovered her just in the past year with the Supreme Court hearings.

What is amazing about Anita Hill when you look back and you look at those scenes where these white men harassing her and asking her and interrogating her in the most private things. Making this black woman, in front of all these white men, say the words "penis" and "pubic hair." And she does it with such strength and courage. Even though she's completely involved, there's a certain detachment about it that her strength is just so inspiring.

I was inspired reading what she has done recently, what she continues to do. She is blazing on so many different frontiers. I was particularly interested that she is in gender equity and fighting workplace harassment, specifically in Hollywood. She's really out there creating opportunities for a new generation and educating a new generation.

She's back in style. But think about when she did it, she was so alone in the crowd.

Sexual harassment really wasn't a conversation until her. And then it took 25 years for it to then really come to the forefront.

It could very well disappear again, which is why we cannot stop the conversation.

Absolutely. One of the other recipients you have this year is a very different choice, Katy Perry. What made you choose her?

We always have one inspirational woman who is better-known already. Gabby Giffords got it, and Alicia Keys. Katy Perry is a very interesting woman because she really has used her voice. She used her voice for people who have no voice and in her case, she chooses children. She's an ambassador for UNICEF.

She also works a lot with the LGBTQ community She has been very candid in her own expression of her gender experiences. I'm so thrilled seeing this generation of mostly women entertainers talking about gender, talking about fluidity, and talking about it not just with their voices, but also with their style. I think Katy Perry is a great example of that. Her personal style really represents her beliefs.

She's an extraordinary person. Her parents were ministers, so she was thrown on stage as a child as they were collecting money, she was supposed to sing.

These other women who are lesser known are doing very different kinds of extraordinary work. This award gives money to them to continue that work. I was so struck by all of the stories, but I was particularly struck by one. By a story that is really about redemption.

You mean Susan Burton, yes. She's extraordinary. She was in jail [after] her child died. You know when you go to jail, there's that horrible spiral down that you don't get a second chance, and it just goes down and down. She was given a chance and by being given a chance, she decided that was going to be her life cause and that's what she does.

She has turned around and created opportunities for other women who have been incarcerated. It's so important because we live in a culture that is not very strong on redemption.

It's not so much on forgiveness but it's the stigma. And then you can never make it up again.

A second chance is the most important thing. Because if you're given a second chance, you actually, truly, truly appreciate it. Therefore, you know what difference it makes.

And you have been up and down in your own career, and on top and all over, and so you know.

But everyone is. There's no life that goes up, up, up. That's not life. There's negative and positive, and all kinds. The landscape changes and that's the journey. Sometimes people think that you are at the very top and maybe you know yourself that you're not. At the same time, maybe sometimes people think, "Oh, you're a has-been," and you also know that that's not true. It's really, really important.

My big lesson to everyone is really is about character. That's what these women have, because character is the only thing that you absolutely have 100% control of. You could lose your health, your wealth, your family, everything, your beauty, your freedom. But you never lose your character, even under torture.

What is character? It's really the relationship you have with yourself, and that is what all these women have. They know that within themselves is their shelter. If you're incarcerated for 18 years and you have two children with a man like [previous DVF award winner] Jaycee Dugard, how do you actually protect yourself? But she did, because she did have a relationship with herself and she raised those kids in those circumstances like that.

Diane, I love just watching your eyes light up as you talk about the strength and the character of these women under such extraordinary circumstances. A lot of that seems to be deeply informed by your mother.

When my mother was 22, she lived in Belgium and she was deported. It was Nazi Germany, and she was doing some resistance work. She got caught and she was very scared that she would be tortured in order to give the names of other resistance. So she said, "I was just hiding, I'm Jewish," which was true. And this woman there said, "Don't say you're Jewish because they will ship you out." But she did and she was shipped out. She went to Auschwitz. She stayed in the concentration camp for thirteen months.

By the time she was eventually released at the end of the war, she weighed 49 pounds. She could barely move. And yet, when she had to fill the questionnaire, to give your name and where you come from, your state of health, she wrote, "Excellent health." She couldn't even move, which explains her character. No matter what, she would never be a victim.

Then she came back and her fiancé came back six months later. They got married. They weren't supposed to have a child. I was born nine months later. My mother really, really taught me that fear was not an option. She would never allow me to be afraid, or to complain, or any of that, and never to be a victim. It's only when I was about 30 or 35 that I understood those seeds were so much ingrained into my personality. It was a big revelation when I found out.

I found out publicly. I was getting an award. By then, I was very successful and I had invented the wrap dress. They gave me an award and I didn't want it and I didn't understand it. Then I started to listen to the program and by the time I got the award, I went on stage and I said things that not only I had never said, but I had never thought. I said, "Well, thank you very much. You all know me because of my wrap dress but what you don't know is that 18 months before I was born, my mother was in Auschwitz."

You have taken that and now you use that. You turn around with that and you identify that in women who, like your mother, have had that kind of courage, and who have survived.

And they all remind me of my mother. I realize that survival is extraordinary. The only thing that can compete with pornography is survival stories, because they are so gripping, and captivating, and they take you to a high and can go anywhere.

There's that saying that if you've endured and survived, people have two options. You can turn around and say, "I got through it, why can't you?" Or you can say, "I want to do everything I can to make sure nobody else has to go through what I went through. I want to help people." That's the common denominator of the women who win this award.

Just by talking about it, you help people. It's just by only by revealing yourself you help people, because it's inspiring. This is why I say, the strength to fight, the courage to survive, and the leadership to inspire.

You mentioned the dress. No one can ever let you out of a conversation without talking about the dress. It's timeless. You've compared it to blue jeans. It's just classic. I read an interview with you where you said that everything you know about life and everything you know about women, you learned from that dress. What have you learned about women from that dress, Diane?

People say I made the dress. The dress really made me. It paid for all my bills, and it took me everywhere. I was actually doing social media before there was social media. I was talking, I was sharing my experience and telling women. I learned about life and I learned about women.