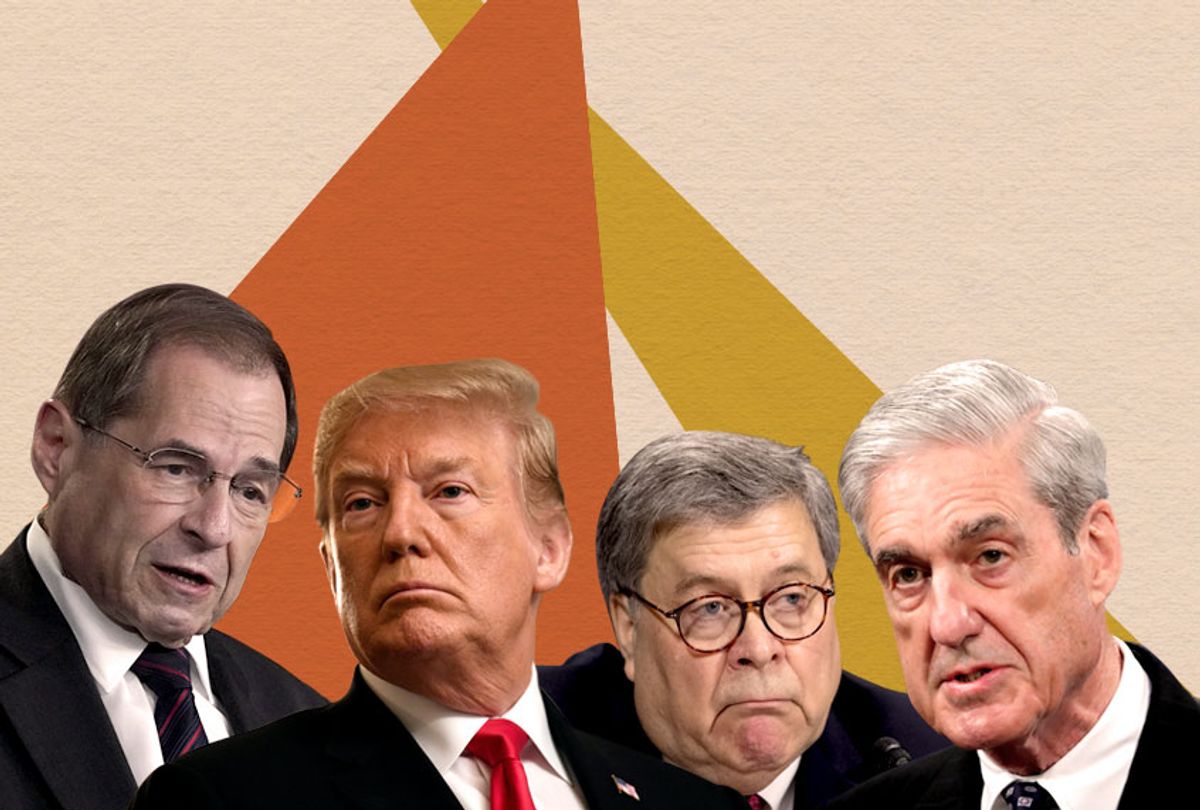 Democrats in the House of Representatives on Tuesday took their most forceful action against President Donald Trump's administration yet, pushing a resolution through the lower chamber that would make it easier to sue the White House in federal court in order to enforce a series of congressional subpoenas thus far ignored by the executive branch.

The resolution, passed on a party line vote of 229 to 191, authorizes the House Judiciary Committee to take legal action against Attorney General William Barr and former White House counsel Don McGahn for defying requests for documents and testimony related to former special counsel Robert Mueller's investigation into Russian interference in the 2016 election, alleged ties between the Trump campaign and Moscow and whether the president obstructed justice.

It also empowers other House committee chairs to authorize lawsuits without a vote from the full House in order to enforce subpoenas and compel testimony from current and former West Wing aides, as lawmakers dig into whether Trump obstructed justice, the administration's efforts to add a citizenship to the 2020 census, alleged mismanagement in the White House security clearance procedures, the president's finances and his administration's immigration policies.

House Judiciary Committee Chairman Jerry Nadler, D-N.Y., indicated Monday that he was willing to delay legal action against the attorney general for failing to comply with a subpoena and turn over an unredacted version of Mueller's report and its underlying evidence, citing a deal with the Justice Department to begin providing lawmakers with some of the evidence collected by Mueller.

"If the Justice Department proceeds in good faith, and we are able to obtain everything that we need, then there will be no need to take further steps," Nadler said. "If important information is held back, then we will have no choice but to enforce our subpoena in court and consider other remedies."

Democrats have appeared to ramp up actions against Trump related to Mueller's investigation in an apparent attempt to draw attention to the special counsel's findings.

Mueller wrote in his report that there was not enough evidence to establish a conspiracy between Trump's 2016 campaign and Russia to influence the outcome of the election. He did not reach a conclusion on whether the president had attempted to obstruct justice, but he also did not exonerate him. The former special counsel detailed at least ten instances of possible obstruction by Trump in his report.

The House Judiciary Committee heard testimony Monday from former White House counsel John Dean, whose congressional testimony in 1973 is believed to have led to President Richard Nixon's resignation. Dean testified that Mueller's report is to Trump as the Watergate grand jury report was to his former boss.

"In many ways, the Mueller report is to President Trump what the so-called Watergate 'road map' . . . was to President Richard Nixon," Dean said. "Special counsel Mueller has provided this committee with a road map."

The hearing highlighted the problems Democrats face in attempting to draw attention to Mueller's findings. Unlike Dean, who eventually turned on Nixon and testified in the 1970s, Trump's former White House counsel Don McGahn has refused to appear before the panel, because the White House directed him not to do so. Dean on Monday called on McGahn to testify before the House Judiciary Committee.

"Can't believe they are bringing in John Dean, the disgraced Nixon White House Counsel who is a paid CNN contributor," the president tweeted. "No Collusion - No Obstruction! Democrats just want a do-over which they'll never get!"

Trump has denied any similarities between himself and Nixon, who resigned in 1974 before Congress could impeach him.

"You can't impeach somebody when there's never been a thing done wrong," the president said in impromptu remarks to reporters at the White House Monday. "When you look at past impeachments, whether it was President Clinton, or I guess, President Nixon never got there. He left. I don't leave. There's a big difference. I don't leave."

"John Dean's been a loser for many years," Trump added.

The focus on Mueller was set to continue Wednesday, when the House Intelligence Committee held a hearing on the special counsel's report. It reviewed the counterintelligence implications of Russia's election interference, as outlined in the document.

Republicans have slammed the hearings as largely a waste of time and have called for Democrats to move on.

"The chairman wants to talk about anything that might sway opinion against the president before the 2020 election," Georgia Rep. Doug Collins, the top Republican on the Judiciary panel, said at Monday's hearing. "That's why these proceedings are moving so slowly. Robert Mueller closed up shop a little too early in the election cycle."