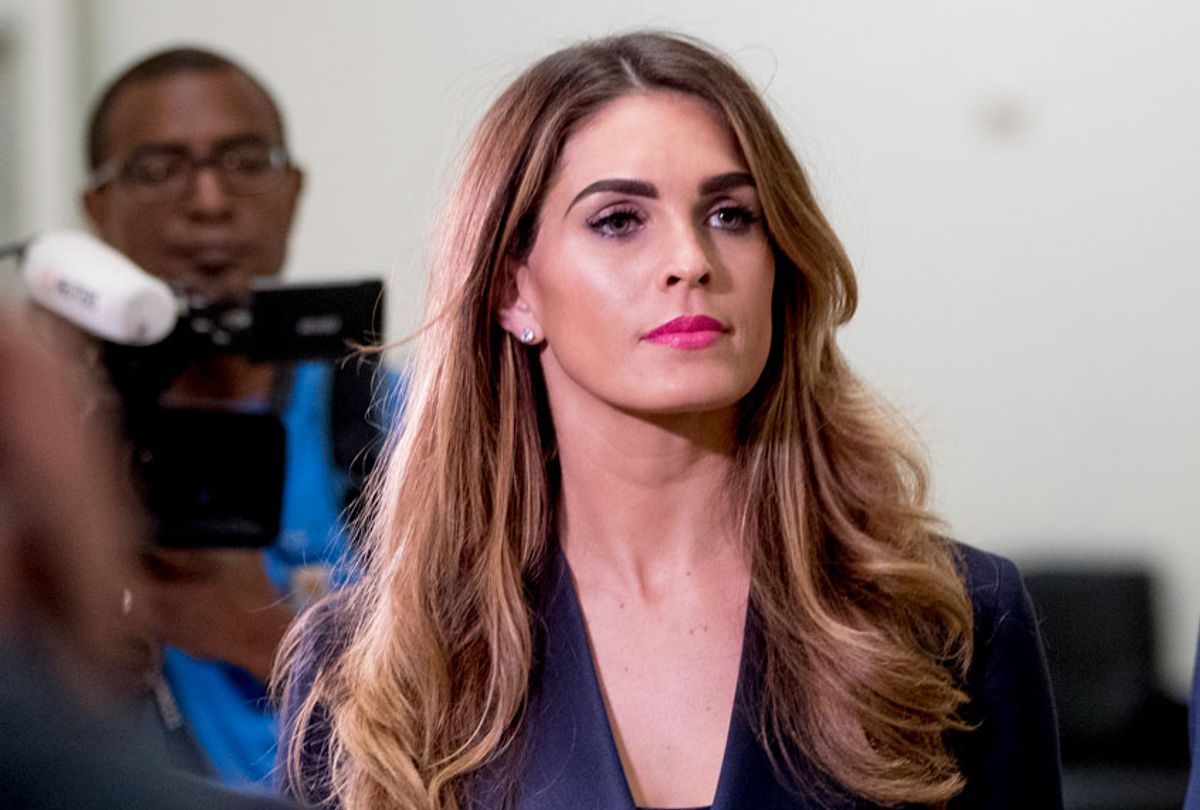 Former White House communications director Hope Hicks was stopped from answering 155 questions posed by lawmakers during her closed-door interview Wednesday on Capitol Hill, according a transcript of the session Thursday evening.

Hicks, a longtime confidante of President Donald Trump, who was a key witness in former special counsel Robert Mueller's investigation into Russian interference in the 2016 election, appeared Wednesday before the House Judiciary Committee.

The panel's chairman, Rep. Jerry Nadler, D-N.Y., released the 273-page transcript a day after Hicks testified for nearly eight hours before his committee as part of its investigation into possible obstruction of justice by the president, which began in March.

The former Trump aide was accompanied by two private attorneys, three lawyers from the White House and a lawyer from the Department of Justice, Nadler said. The White House lawyers present during the interview often quickly interjected questions posed by lawmakers with an "objection." In total, 155 went unanswered.

The questions Hicks refused to answer ranged from the president's actions raised in Mueller's report to where her desk was located in the West Wing in relation to the Oval Office.

"I'm going to object here, Mr. Chairman," her lawyer said when Nadler asked about the location of her office in the White House.

Deutch continued, "Were you in any meetings where there were any discussions with the president of the United States about his refusal to answer any questions about obstruction of justice?"

Lawyers also objected to questions posed by lawmakers about the recusal of former Attorney General Jeff Sessions from the Russia probe and the firing of James Comey as FBI director, according to the released transcript.

The lawyers noted Hicks "may not be compelled to speak about events that occurred during her service as a senior adviser to the president," but did not cite executive privilege to block the former aide's testimony.

Hicks was also asked by Rep. David Cicilline, D-R.I., if the Trump campaign was "happy" about the WikiLeaks release of thousands of hacked emails from Trump's Democratic rival, Hillary Clinton.

"I think that 'happy' is not — I don't think that's a fair characterization. I think 'relief that we weren't the only campaign with issues' is more accurate," Hicks responded.

She also said that she would not accept information from a foreign government and that she would report such an offer to the FBI if she "felt it was legitimate enough to have our law enforcement dedicate their time to it — sure."

The question referenced remarks made earlier this month by Trump, who told ABC News that if a foreign government offered him information on a political opponent, "I think I'd want to hear it." The president also said that he did not feel any obligation to alert the FBI if his campaign is approached with such assistance. (The president's eldest son, Donald Trump Jr., infamously did not go to the FBI after he attended a June 2016 meeting with a Russian lawyer promising "dirt" about Hillary Clinton, and Trump's personal attorney, Rudy Giuliani, had been openly gathering information in recent weeks from Ukrainian officials that he said could benefit Trump in a 2020 race against former vice president Joe Biden.)

Hicks was also asked if she thought the president's comments about accepting dirt on his political rivals from foreign nationals were a joke.

"I don't know. I have not discussed that remark with the president," she said. "I didn't — I didn't see the entire interview, so I saw the clip you're referencing. I don't know if there was additional context. I don't think that was a joke, based on what I saw," she said.

Hicks was also asked by Rep. Madeleine Dean, D-Penn., about the extent of the contacts between the Trump campaign and Russia, as well as the number of contacts made.

"I think someone mentioned upwards of 100 earlier today. I don't know if that's accurate — or if that's an accurate recollection," Hicks said, adding that she was "very surprised" to learn that fact, because she "wasn't aware of any contacts during my time on the campaign."

After the transcript's release Thursday night, Rep. Doug Collins, R-Ga., the top Republican on the House Judiciary panel, said that Congress had learned nothing new from Hicks' testimony. He previously dismissed the hearing as a "made for press event" for Democrats.

"Ms. Hicks testified there was no collusion. She noted clearly when Democrats mischaracterized her words, and ultimately, Ms. Hicks testified she doesn’t believe she provided any new information that she hadn't already provided to multiple different bodies investigating the president," Collins said in a statement. "If Chairman Nadler were truly interested in gathering new facts, he would issue a subpoena to Robert Mueller, since no privileges or immunities would apply to his appearance or testimony, and Congress has yet to hear from him."

Nadler, meanwhile, said Hicks' testimony would help deliver House Democrats a crucial victory in court, arguing that the former Trump aide's refusal to answer questions from lawmakers about her White House tenure will clearly demonstrate to a judge how far the White House has gone in its stonewalling.

"It's one thing to tell a judge blanket immunity is not a right thing," he told Politico in an  interview published Friday morning. "It's another thing when a judge can see what that means in actuality — and how absurd that is."

"So sad that the Democrats are putting wonderful Hope Hicks through hell, for 3 years now, after total exoneration by Robert Mueller & the Mueller Report," the president added Wednesday afternoon. "They were unhappy with result so they want a Do Over. Very unfair & costly to her. Will it ever end?"

Hick's appearance marked the first time a current or former member of Trump's inner-circle faced questions from Congress as part of the Democrats' obstruction of justice investigation. It is unclear whether her testimony, which did not mention her White House tenure, will advance the panel's probe focusing on Trump's conduct as president.

Hicks' coziness with Trump made her a key witness in the investigation in Mueller's investigation. She was interviewed last year for roughly nine hours by the former special counsel and the House Intelligence Committee behind closed-doors, and her exit from the White House came within 48 hours of her admitting to the committee that she had told "white lies" on the president's behalf.