House Democrats are expected to hold Hicks and Donaldson in contempt, should they follow the White House's request 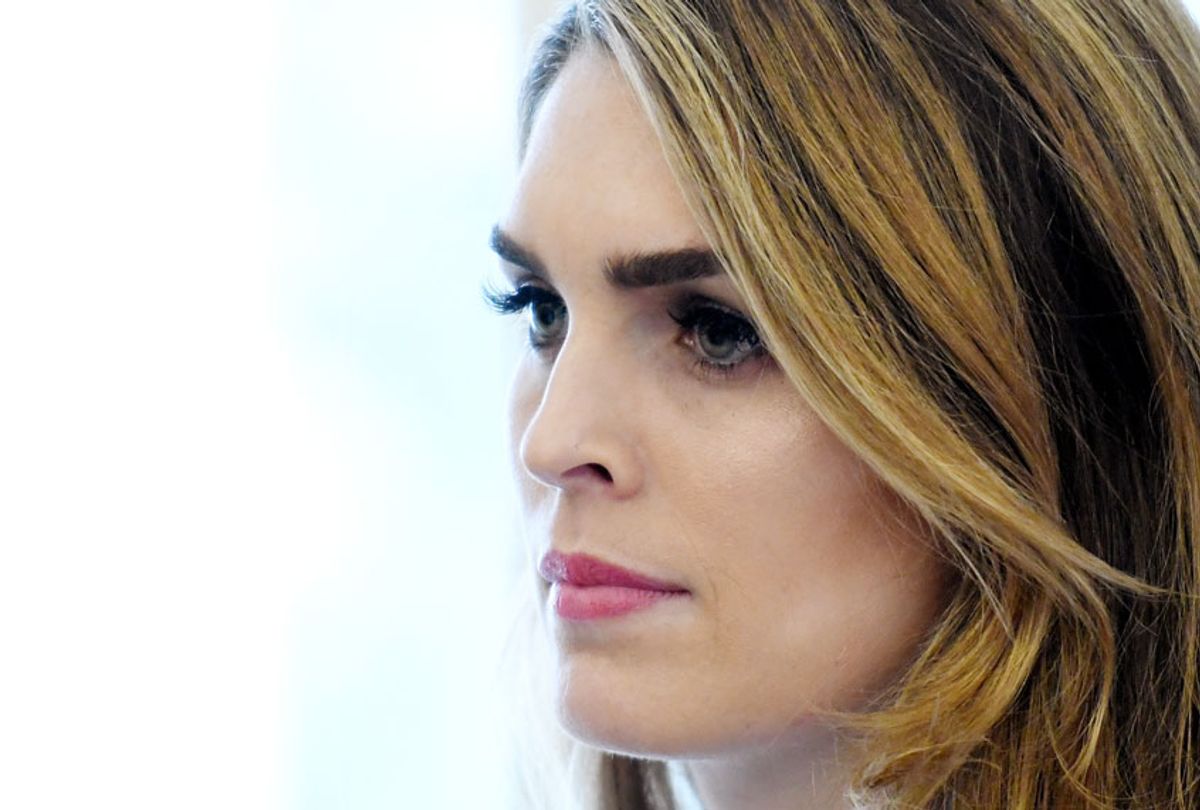 The White House has directed former staffers Hope Hicks and Annie Donaldson to defy a congressional subpoena for documents related to their time in President Donald Trump's administration.

Hicks, the former White House communications director, could still turn over documents requested by the panel in relation to her time on Trump's presidential campaign, a period that is not covered by executive privilege, according to House Judiciary Chairman Jerry Nadler, D-N.Y. It remains unclear if the White House can invoke executive privilege related to the presidential transition period.

Hicks and Donaldson, the former deputy White House counsel, faced a Tuesday deadline to turn over documents. They have been subpoenaed to appear for testimony later in June.

In a statement, Nadler said the two former aides were told not to cooperate, but revealed that Hicks has agreed to produce documents related to her time working for the Trump campaign.

"As part of President Trump's continued obstruction of Congress, the White House has instructed both Hope Hicks and Annie Donaldson not to turn over records in response to subpoenas issued by our committee last month," Nadler said. "I note that Ms. Hicks has agreed to turn over some documents to the committee related to her time working for the Trump campaign, and I thank her for that show of good faith."

Nadler noted that federal law says the requested documents are no longer covered by executive privilege, "if they ever were."

"The president has no lawful basis for preventing these witnesses from complying with our request," he said. "We will continue to seek reasonable accommodation on these and all our discovery requests and intend to press these issues when we obtain the testimony of both Ms. Hicks and Ms. Donaldson."

White House Counsel Pat Cipollone sent a letter Tuesday to Nadler explaining that acting White House chief of staff Mick Mulvaney had instructed Hicks and Donaldson not to provide documents that include executive branch material, although the White House did not assert executive privilege over the materials.

Cipollone told Nadler that the Judiciary panel needs to negotiate directly with the White House in order to determine which records it can obtain.

The White House made a similar argument in its attempt to block White House counsel Don McGahn from turning over documents to the Judiciary panel or testifying, and the full House of Representatives is now preparing to vote next week to hold him in contempt of Congress.

The House Judiciary Committee issued subpoenas to Hicks and Donaldson last month for testimony and documents related to the panel's ongoing investigation into allegations of obstruction of justice, public corruption and other potential abuses of power by Trump, his associates and other members of his administration. The panel also requested material related to the 2016 presidential campaign.

The standoff is the latest in an ever escalating feud between House Democrats and the White House over investigations on issues, including foreign election interference, alleged mismanagement in the White House security clearance procedures, the president's finances and his immigration policies.

Since the Democrats seized control of the House of Representatives in January, current and former Trump administration officials have faced a barrage of subpoenas, demands to testify before a host of congressional panels and letters seeking a flurry of documents. But the White House has often ignored congressional requests for documents and witnesses, claiming the demands are an unconstitutional infringement on the president's powers. Democrats, meanwhile, have accused the Trump administration of stonewalling or flat-out ignoring their requests for documents and information.

The executive branch's attempts to push back against congressional inquiries targeting the White House have led a growing number of Democrats to contemplate new ways to compel current and former West Wing aides to acquiesce to their demands, including heightening calls to open an impeachment inquiry against the president. Some Democrats have even proposed personally fining or jailing administration officials who do not comply with their requests.

The lower chamber is set to vote next week to hold Attorney General William Barr and McGahn in contempt of Congress for refusing to comply with congressional subpoenas. The resolution will then move to civil court, where Democrats hope they can convince a judge to compel the two men to comply with their subpoenas.

Barr failed to comply with a subpoena to provide lawmakers with an unredacted version of special counsel Robert Mueller's report into Russian interference, while McGahn defied a subpoena to testify before the House Judiciary Committee.

Democrats are likely to hold Hicks and Donaldson in contempt, should they follow the White House's request and refuse to turn over documents.

House Oversight Committee Chairman Elijah Cummings, D-Md., said Monday that his panel would move to hold Barr and Commerce Secretary Wilbur Ross in contempt of Congress for failing to comply with subpoenas for documents related to the Trump administration's decision to add a citizenship question to the 2020 census.

Cummings said their failure to respond to the subpoenas is "part of a pattern" by the White House to engage in a "cover-up" and challenge the authority of Congress to conduct oversight investigations.

The congressman said the cover-up "is being directed from the top," and he pointed to Trump's pledge to fight all subpoenas issued by Congress.