What if Trump said "I am a racist": Kris Kobach struggles with basic racism test

"Um, I don't know. That would be a really tough question," Kobach told CNN's Chris Cuomo 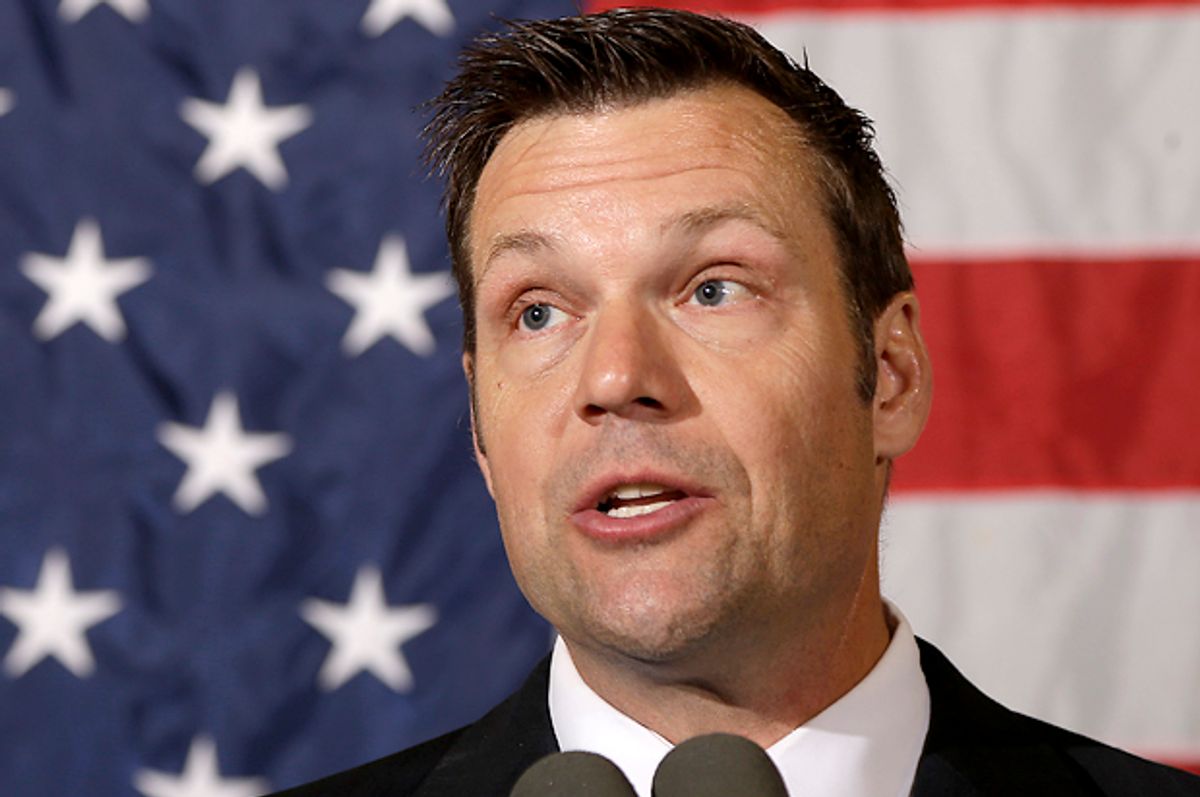 Former Kansas Secretary of State Kris Kobach, the conservative firebrand who has waged a tireless crusade to curtail immigration and voting rights in America, declined to say that he would not vote for President Donald Trump — even if Trump said explicitly: "I am a racist."

Kobach, a vocal supporter of the president who is running for an open U.S. Senate in Kansas, said he's not sure if he would support Trump if he declared publicly that he is a racist.

"Um, I don't know. That would be a really tough question," Kobach said in an interview with CNN's Chris Cuomo.

"I'd have to think about who was running against him," Kobach said.

The exchange came after Kobach defended Trump's recent spate of racist comments directed at a group of newly-elected congresswomen of color. The White House and Democrats in Congress have been embroiled in a public feud since the president tweeted Sunday that a group of progressive congresswomen "who originally came from countries where governments are a complete and total catastrophe" should "go back and fix the totally broken and crime infested places from which they came."

Trump did not mention the lawmakers he was criticizing by name, but his comments were widely interpreted as targeting the four freshmen lawmakers who make up "The Squad" — Democratic Reps. Alexandria Ocasio-Cortez of New York, Ilhan Omar of Minnesota, Rashida Tlaib of Michigan and Ayanna Pressley of Massachusetts. The four legislators are U.S. citizens and only Omar, who arrived in the U.S. as a refugee from Somalia, was born abroad.

"When the president said . . . that these members of Congress should go back to the crime-infested places from which they came, right?" Kobach told CNN. "Well, where are those places? Well, in AOC's case it's the Bronx; in Tlaib's case, it's Detroit; and in Omar's case, it's originally Somalia. Those are all crime-infested places and in Somalia's instance, there's terrorism, too. So it's a fact. To simply state that fact is not racist."

"I let you get the argument out but, I'm just saying, it fails on its face," Cuomo interjected, noting that Trump did not say "places," but rather "countries," implying that three of the four lawmakers were not born in America.

Cuomo went on to say that Trump took aim at those lawmakers "because they are brown," which prompted Kobach to argue that critics were misinterpreting the president's tweets because of the challenges posed by Twitter's character limit.

"That's the problem with Twitter. You're reading into it," Kobach said.

But Trump continued to take aim at the lawmakers on and offline in recent days.

He tweeted Tuesday that the four congresswomen "have been spewing some of the most vile, hateful, and disgusting things ever said by a politician in the House or Senate" and stated his belief that Congress should take action on the "filthy language, statements and lies" allegedly shared by the lawmakers.

He also accused the four congresswomen of being "anti-America" and said that the lawmakers could leave if they were unhappy with the state of things.

He also mentioned Omar by name, falsely claiming the congresswoman praised the terrorist organization al Qaeda while further accusing her of "hating Jews." Trump also brought up comments Omar made earlier this year about the 9/11 terrorist attacks, which prompted immediate outrage from conservatives and spurred an increase in death threats against the congresswoman.

Trump continued his verbal volleys at a campaign rally Wednesday evening in North Carolina, provoking the crowd at Greenville's East Carolina University to break out in chants of "send her back," aimed at Omar, even after the House of Representatives voted Tuesday on a resolution condemning the president over his comments.

Kobach, nevertheless, continued to defend the president, stating on CNN: "The reason President Trump wants to put the spotlight on them is because they are pushing socialism, they're pushing a radical left agenda, and as long as Americans are seeing them as the representatives of the Democrat Party then Republicans are winning."

Kobach's unwavering defense of the president comes as he is vying for the Republican Party's nomination for the U.S. Senate seat being vacated by four-term GOP Sen. Pat Roberts. His bid faces an uphill battle from members of the GOP in the wake of his failed run for governor last year. Kobach, an outspoken Trump supporter, championed the president's anti-immigration agenda, going as far as to take credit for Trump's plans to "make Mexico pay for the wall."

In 2017, Kobach headed Trump's now-defunct Presidential Advisory Commission on Election Integrity, which uncovered no evidence to support the administration's claims of widespread voter fraud in the 2016 election. The commission was disbanded after many states refused Kobach's demand to hand over their confidential voter rolls to the federal government.

Kobach is also a paid Breitbart News columnist, where he has articulated his hardline anti-immigration views. The Trump loyalist, who once accidentally leaked Homeland Security documents that revealed a plan to put Trump's hard-line immigration platform into practice, was reportedly under consideration as Secretary of Homeland Security. He also served as an adviser on immigration to Mitt Romney's 2012 presidential campaign and has advocated for "self-deportation."

Trump appears to hold the key to revive Kobach's political fortunes at a time when they appear to be a vanishing act.