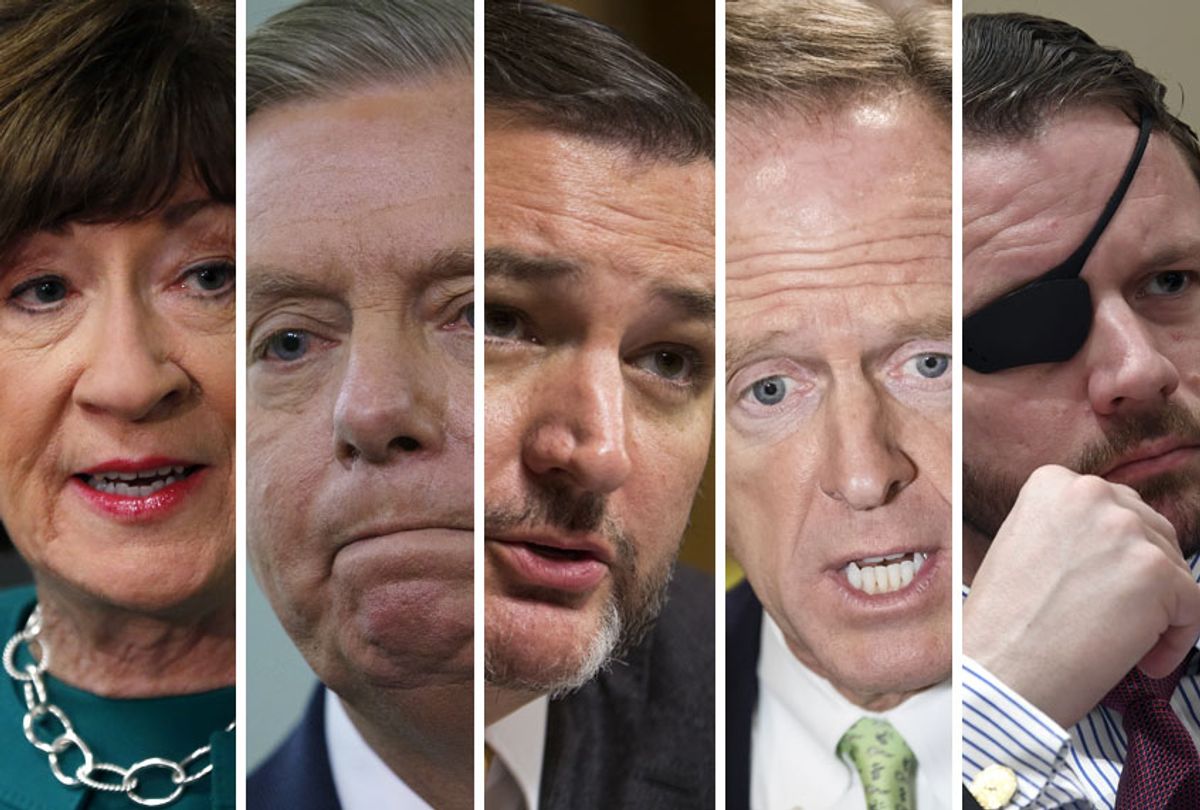 As the county reeled over two mass shootings over the weekend left at least 29 people dead and 53 injured, several Republicans lawmakers — including President Donald Trump — boldly condemned white supremacy, something that many prominent right-wing politicians had been loath to do for so long.

"In our voice, our nation must condemn racism, bigotry, and white supremacy," Trump said Monday in a nationally-televised address from the White House. "Hatred warps the mind, ravages the heart and devours the soul."

Rather than elaborate on his earlier calls for stronger background checks, the president urged lawmakers to reform mental health laws to prevent more bloodshed, declaring: "Mental illness and hatred pulls the trigger — not the gun."

Saturday's shooting in El Paso is at least the third mass shooting this year where a suspect is believed to have posted to 8chan ahead of an attack. 8chan, also stylized as "Infinite Chan," is a right-wing online messaging board known for its racist, bigoted and anti-Semitic content, according to authorities.

Federal prosecutors are treating the El Paso massacre as a case of domestic terrorism.

Law enforcement officials in El Paso said on Saturday that they were investigating a document posted on 8chan, which they believe was written by Patrick Crusius, the 21-year-old alleged shooter. Titled "The Inconvenient Truth," the four-page document is believed to have included language espoused by the white nationalist movement, as well as a warning about the "Hispanic invasion of Texas." Those words directly echoed Trump's continued warnings of "an invasion" at the southern border ahead of the 2018 midterms.

Sen. Ted Cruz of Texas was one of several elected officials in the Republican Party to condemn the El Paso gunman's anti-immigrant and racist language, but he stopped short of calling for background checks on firearms.

"I am deeply horrified by the hateful anti-Hispanic bigotry expressed in the shooter's so-called 'manifesto.' This ignorant racism is repulsive and profoundly anti-American," Cruz tweeted Sunday.

"We must speak clearly to combat evil in any form it takes," he continued. "What we saw yesterday was a heinous act of terrorism and white supremacy. There is no place for this in El Paso, in Texas, or anywhere across our nation."

Follwing the shootings in El Paso and Dayton, there are hints conservatives might finally be ready to take action on gun control.

In a front-page editorial, the right-leaning New York Post called on Trump to stand up to the National Rifle Association (NRA) and urged him to "come up with answers. Now. Beginning with the return of an assault-weapons ban."

The National Review, a conservative publication, published a piece Monday titled: "It's time to declare war on white nationalist terrorism." Conservative writer David French begged readers "reject the public language and rhetoric that excites and inspires racist radicals," and implored the nation's leaders to "respond with unequivocal, relentless messages not just of condemnation for racists but also with their own words of reconciliation and national unity."

An editorial published in the right-leaning Washington Examiner declared:

"Trump ought to use the bully pulpit to become a leading crusader against white nationalism and racism. These mindsets are immoral and they threaten everything that makes America great. Some conservatives and Republicans have hesitated to acknowledge that this a growing scourge, but after El Paso any such reluctance is unacceptable. . . . Trump needs to make clear that he hates white nationalism as something un-American and evil."

Rep. Dan Crenshaw, R-Texas, tweeted that "white supremacy has no place in this world" and called for states to implement "red flag laws," which allow law enforcement officials to restrict the purchase or access of a firearm from people who may pose a danger to themselves or others.

"Time to do more than pray. Time to enact common-sense legislation in Congress to empower states to deal with those who present a danger to themselves and others — while respecting robust due process," tweeted Sen. Lindsey Graham, R-S.C., on Sunday. "Red flag laws have proven to be effective in states that have them."

Toomey released a statement urging Congress to pass the legislation he co-sponsored with Sen. Joe Manchin, D-W. Va., to expand background checks on all commercial firearm sales. He is also in favor of "red flag" measures.

Collins, meanwhile, decried white supremacy as an "evil" that threatens "the fabric of our society," and touted her record of supporting "closing loopholes in background checks to prevent the sale of firearms to criminals and individuals with serious mental illness."

GOP state legislator John McCollister of Nebraska wrote tweeted Sunday that he believes the Republican Party is "enabling white supremacy in our country."

He said not all Republicans are white supremacist or racist but noted that the Republican Party is "COMPLICIT to obvious racist and immoral activity inside our party."

"We have a Republican president who continually stokes racist fears in his base.  He calls certain countries 'sh*tholes,' tells women of color to 'go back' to where they came from and lies more than he tells the truth," McCollister wrote on Twitter. "We have Republican senators and representatives who look the other way and say nothing for fear that it will negatively affect their elections. No more. When the history books are written, I refuse to be someone who said nothing."

"I implore my Republican colleagues to stand up and do the right thing," he concluded.

Texas Land Office Commissioner George P. Bush, son of Jeb and nephew of President George W., tweeted Saturday: "I proudly served in Afghanistan as a Naval officer where our mission was to fight and kill terrorists. I believe fighting terrorism remains a national priority. And that should include standing firm against white terrorism here in the U.S. There have now been multiple attacks from self-declared white terrorists here in the U.S. in the last several months. This is a real and present threat that we must denounce and defeat."

In addition, a growing number of Democrats have called on Senate Majority Leader Mitch McConnell, R-Ky., to cancel the upper chamber's August recess in order to pass gun control legislation in the wake of the two mass shootings. Among them was Senate Minority Leader Chuck Schumer, D-N.Y., who urged McConnell  to "call the Senate back for an emergency session." The top Senate Democrat said his colleagues must "debate and vote" on a universal background check bill that passed the House of Representatives in February.

McConnell tweeted Saturday that he was "horrified" by the "senseless violence."

Rep. Alexandria Ocasio-Cortez, D-N.Y., retweeted that message on Sunday as she called out the Kentucky Republican for merely offering "my prayers." Ocasio-Cortez accused McConnell of "sitting on" the background check bill "since February giving bogus excuses."

Many of the Republicans who spoke out against white supremacy did not pin blame on Trump for encouraging white nationalism, while Democrats have argued that Trump's incendiary rhetoric on immigration and reluctance to reject white nationalism has contributed to the bloodshed in El Paso and elsewhere.

White House counselor Kellyanne Conway called for "unity" on Sunday and said that "working as one to understand depraved evil & to eradicate hate is everyone's duty," while former Democratic Rep. Beto O'Rourke of Texas, whose district included El Paso, accused the president of "promoting racism."

In February, Trump visited El Paso to host his first campaign rally of the year. There, he made another public demand for his $5.7 billion "wall" that would stop what he has labeled "an urgent national crisis" at "our very dangerous southern border." Without offering evidence, the president blamed a surge of crime, drugs and human trafficking on migrants seeking illegal entry.

In March, after a gunman opened fire at two mosques in the New Zealand city of Christchurch, killing 50 people and injuring dozens more, Trump said that he did not believe white nationalism was becoming a widespread threat around the world. The New Zealand gunman allegedly praised Trump as "a symbol of renewed white identity and common purpose" and referred to immigrants as "invaders within our lands" in a racist screed shared prior to the attack.

Trump has denied responsibility for inciting violence in the past, and he condemned the white supremacy during his televised address on Monday.

"Hate has no place in our country," the president said. "We are a loving nation, and our children are entitled to grow up in a just, peaceful and loving society. Together, we lock arms to shoulder the grief. We ask God in heaven to ease the anguish of those who suffer, and we vow to act with urgent resolve."